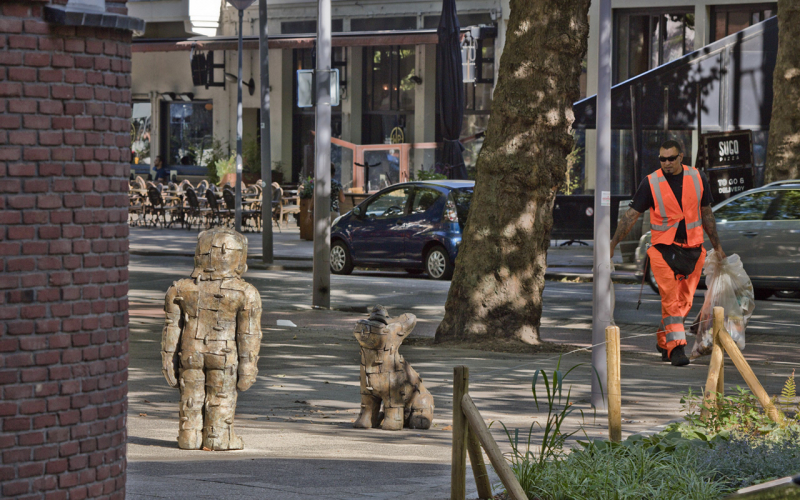 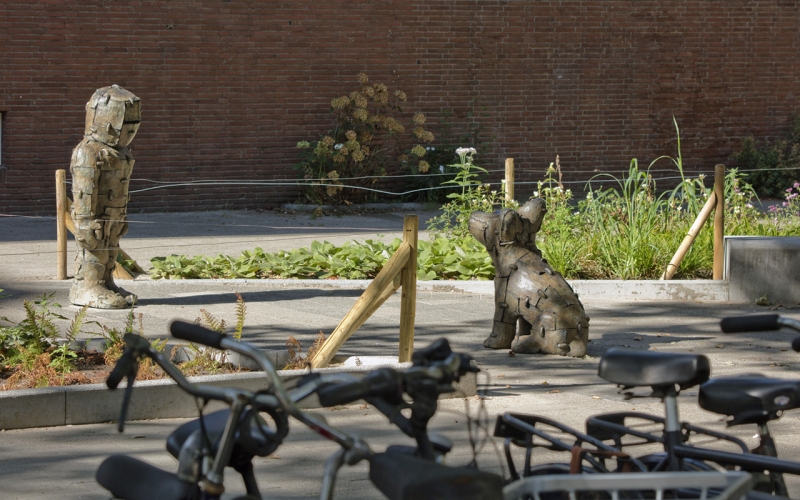 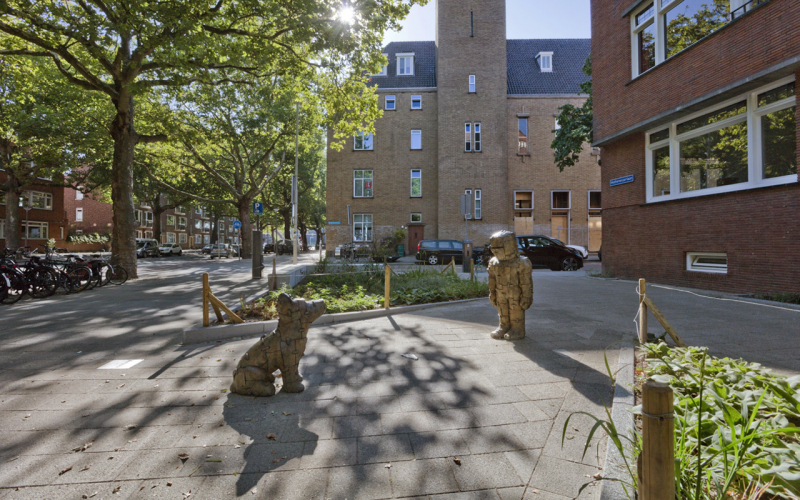 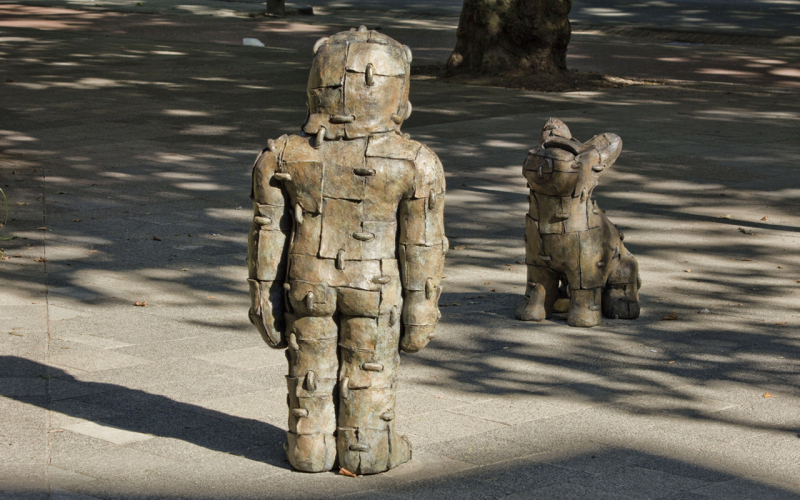 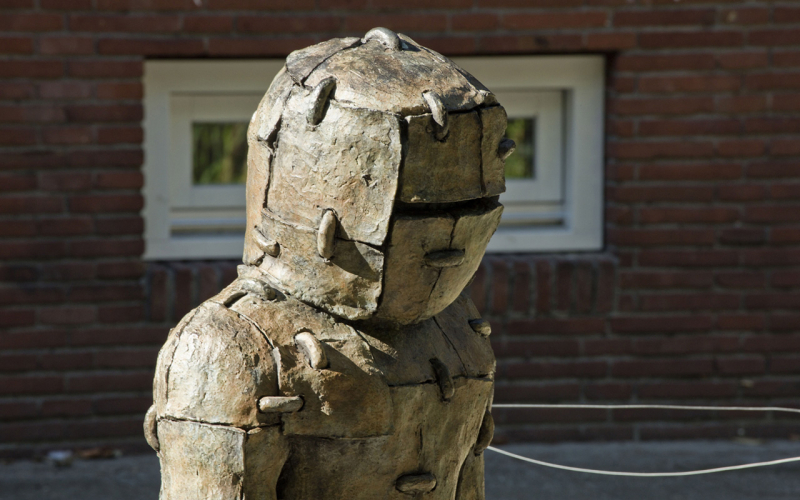 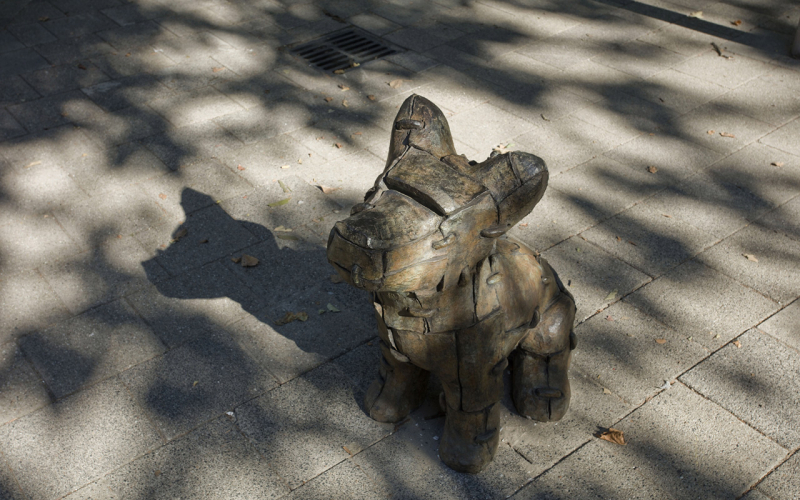 On Friday, July 8, 2022, the new work of art was unveiled on the corner of Mathenesserlaan and Breitnerstraat Armor by artist Hans van der Ham unveiled. The initiative came from residents who wanted to turn the sidewalk into a green place to stay. One of the residents asked whether an existing work of art was available. A match was quickly made, because BKOR was looking for a location for one of his works of art together with Van der Ham. A visit to the artist's studio followed to see the bronze sculptural casings of a figure with dog and it was love at first sight. The images Armor were part of an earlier period in Van der Ham's career. An 'armour' can be translated as armor or armour. His figures' outfits are visibly empty. They're just shells, outsides. Archetypal story figures play an important role in the creation of his work. Van der Ham is influenced by the Art commedy from 16th and 17th century Italy, a form of street drama with fixed characters. Van der Ham says about this: “Different ethnic peoples have a visual culture that is based on the real inspiration of dead matter. In these cultures there is no question of a fairytale metaphor, as with Pinocchio, but a harsh reality. The shaped figures ARE the inspiration of the person or deity they represent and not the usual symbolic representation of it in our culture. " "And then there's the story about the golem. This man-made figure from ancient Judaism (and later reshaped in a novel by Gustav Meyrink) was made of clay and resembled man in everything, with one difference: the lack of the soul, with all the dramatic consequences of that. In this age of biotechnological developments, my images want to remind us of old stories that could become reality in an almost alchemical way..” (Source: Kunstbeeld, June 2007).

Hans van der Ham (Eindhoven, 1960) is a sculptor, painter and draftsman. He studied classical piano at the Royal Conservatory in The Hague and the Utrecht Conservatory. He then studied autonomous art at the Academy of Fine Arts in Rotterdam, where he graduated with paintings, drawings and graphics. Van der Ham was mainly active as a sculptor for over 30 years. But his indefinable worlds on paper, made of gouache or black ink, also characterize his oeuvre. In 2020, the need arose from the spatial work to return to its old metier in the form of paintings in different formats. Van der Ham has been working as an independent visual artist in Rotterdam since 1989 and regularly has exhibitions at home and abroad. His work is included in various museum and corporate collections. In 2012, Van der Ham founded Garage Rotterdam together with a Rotterdam patron, where he was responsible until 2015 as curator and artistic director. Van der Ham regularly makes exhibitions, such as SOUL MUNDI (2018) for Museum Boijmans Van Beuningen.