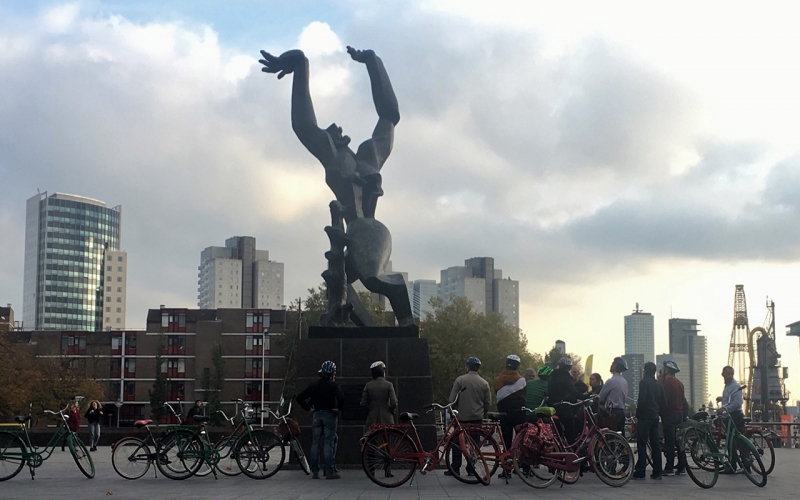 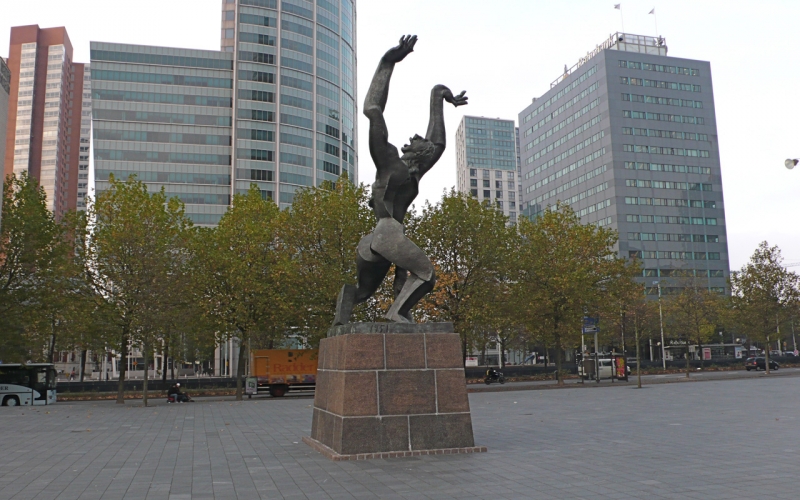 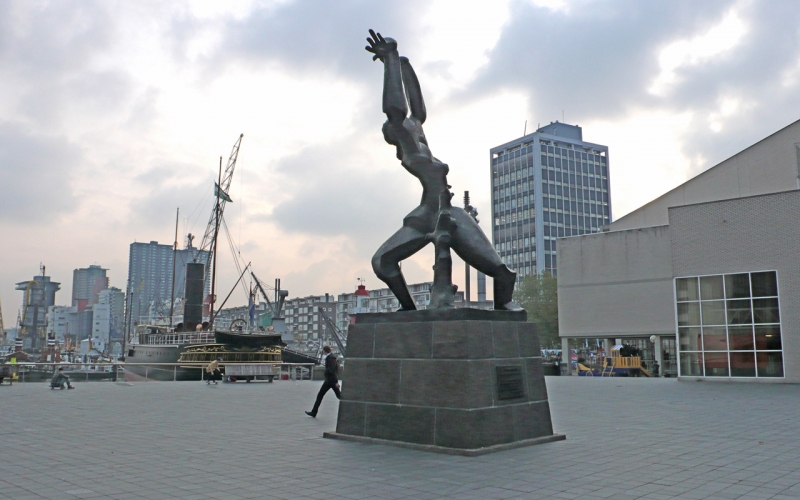 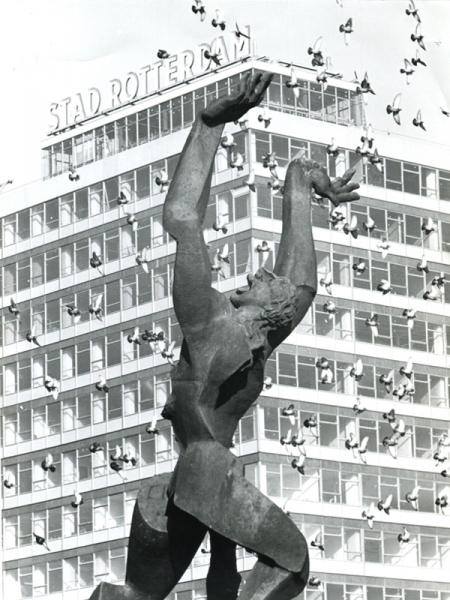 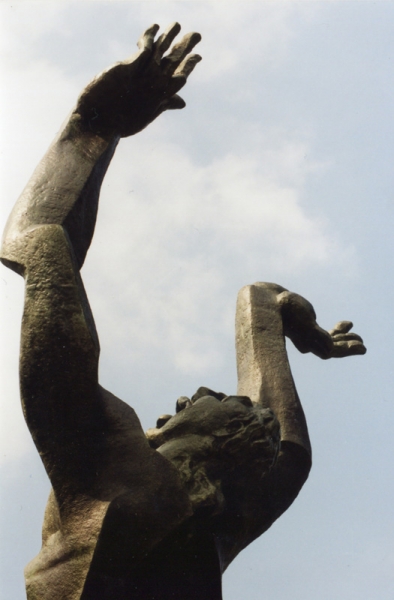 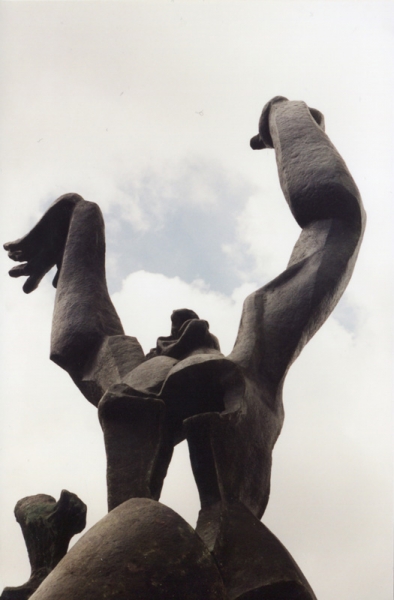 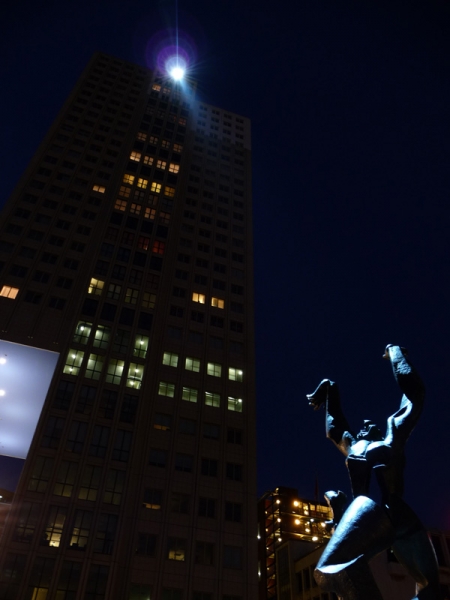 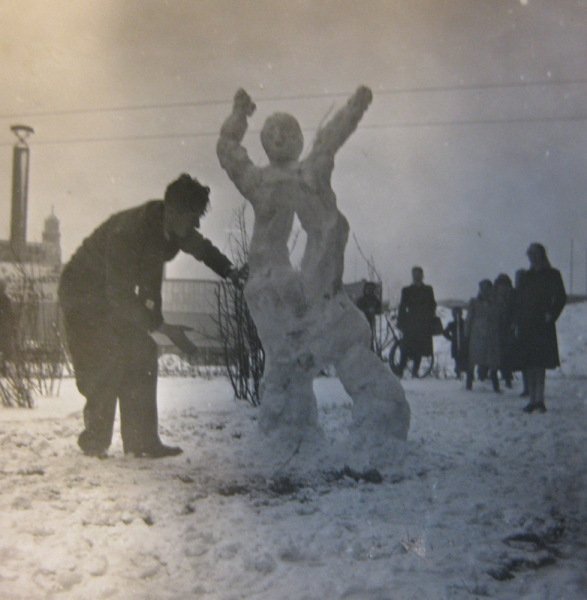 This image is one of the most famous international war monuments. The destroyed city has become the embodiment of the bombed city of Rotterdam. Zadkine made this war memorial in 1947 as a terracotta statue of 70 cm high. In 1949, the then director of the Bijenkorf hit mr. Van der Wal was so impressed with the design that he purchased a large bronze version and donated it to the municipality of Rotterdam. The hole in the body of this affected figure symbolizes how Rotterdam was hit in his heart with the bombing by the Germans. Only a few people found the desperation of the image too demonic to permanently determine the street scene. The vast majority of the people of Rotterdam thought that the sculpture very well reflects the desperation and the desire to rise up in an intelligible way. On 15 May 1953 became The destroyed city unveiled by Mayor Van Walsum. The statue was placed on Plein 1940, a location chosen by sculptor Ossip Zadkine from a few options. It was surrounded by the battered city overlooking the damage from the bombing. Zadkine also chose this location because of the view of the Leuvehaven behind it: this way it connects the port and the city, and has a view of the sky and water. Also in the oeuvre of Ossip Zadkine takes The destroyed city in a special place. It is not only his greatest sculpture, but also one of the most convincing expressions of what occupied him as an artist. For more information: Sculpture International Rotterdam

Sculptor Ossip Zadkine (Vitebsk, Belarus, 1888 - Paris, 1967) develops a geometric style in the Interbellum period, derived from cubism. From 1930 onwards, his work becomes increasingly baroque and spatial. When World War II breaks out, Zadkine flees to the United States. There he makes his first pierced figures. Back in Paris, it appears that much of his work has disappeared from the studio or has been destroyed. From those years working in Paris, he developed into one of the most influential sculptors of modern art.