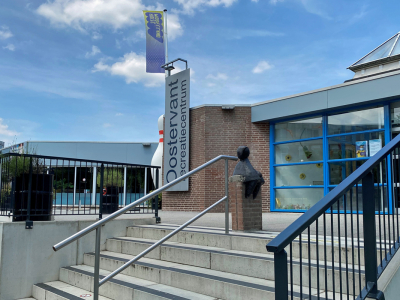 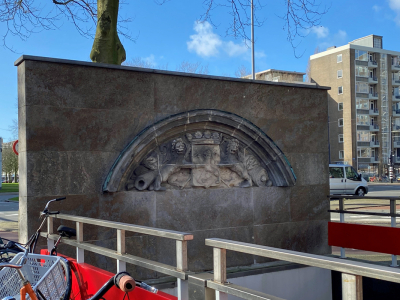 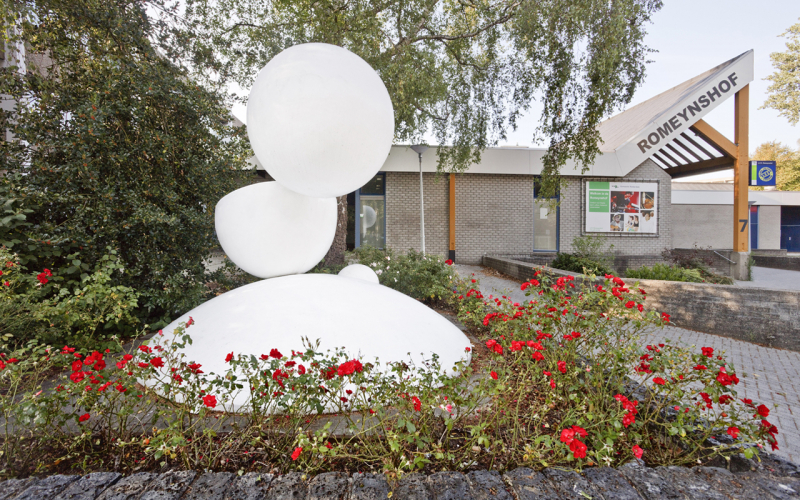 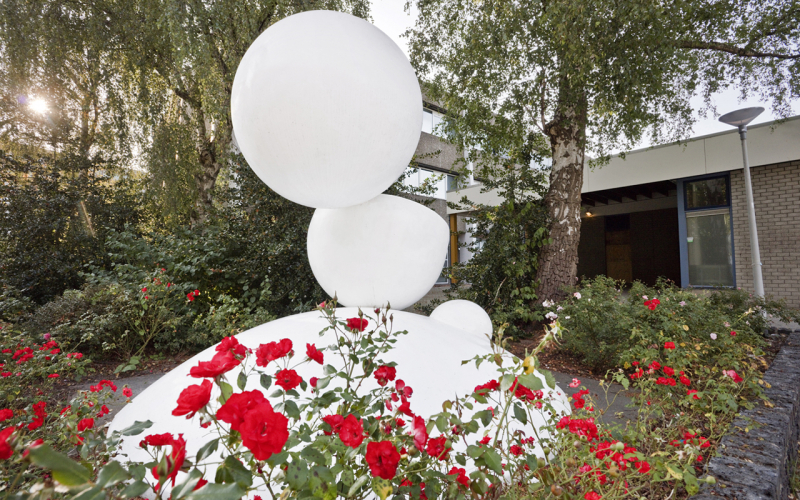 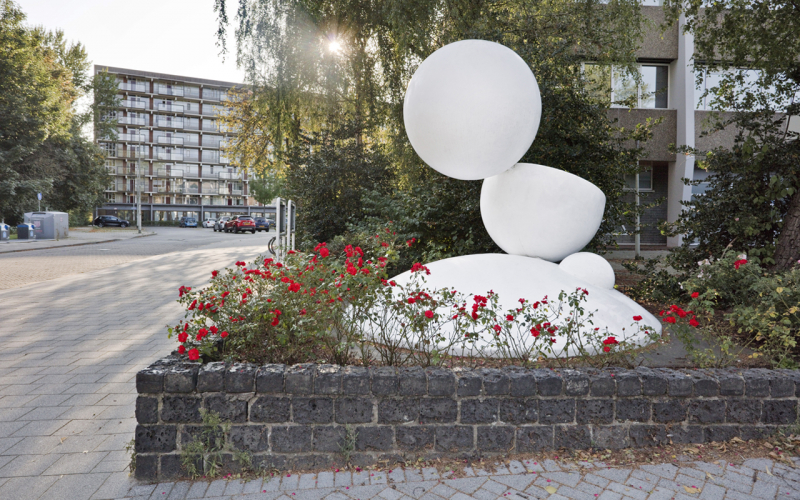 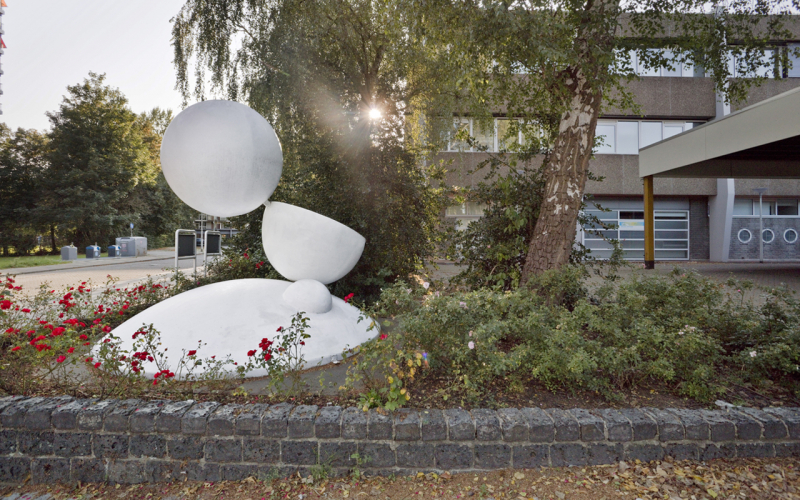 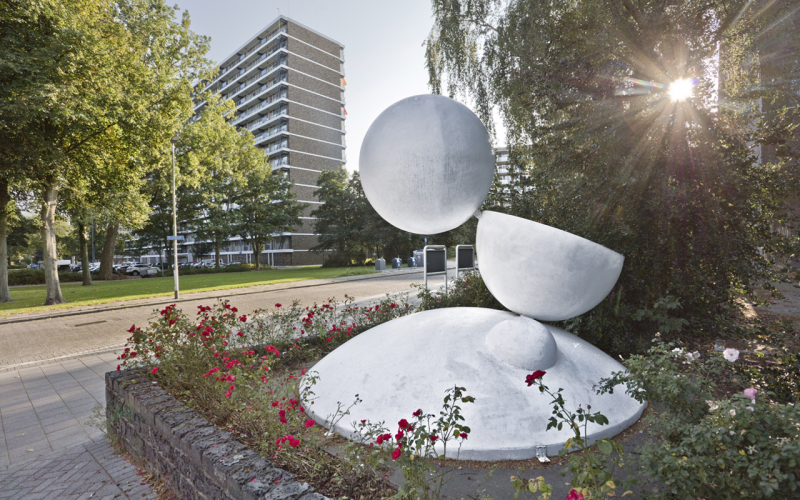 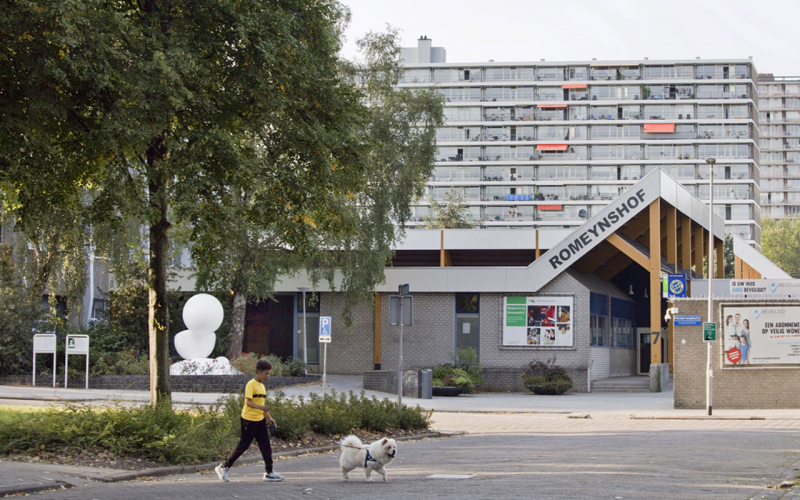 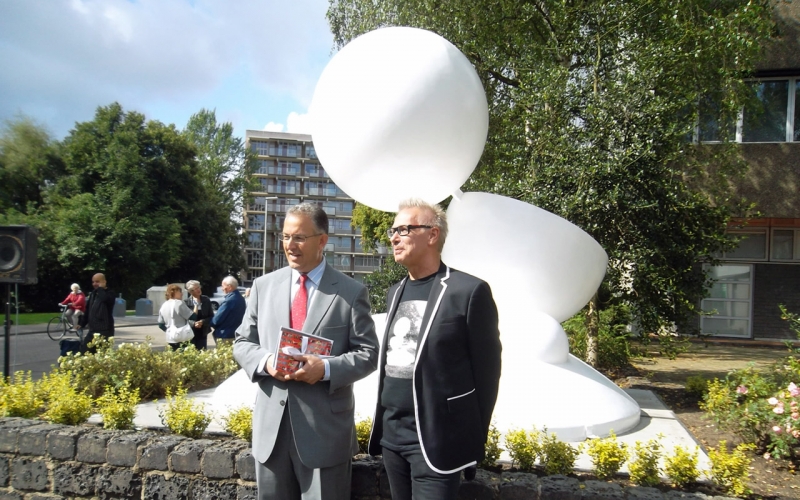 In 1972, the Rotterdam artist Hans van der Plas made an artwork of three white spheres: abstract shapes that express a certain movement when stacked on top of each other. It was a time when environmental design, then mainly organic forms in art, was an important tool in response to built – especially angular – architecture. This artwork titled The white spheres depicts the molecules of blood plasma. The color white has been used because doctors wear white coats. That makes this sculpture organic and futuristic at the same time: the white spheres seem to float on a large satellite dish. The white spheres is made of polyester, which is suitable for various weather conditions but does not last forever. Over time, the material broke down. 'It started with a small hole that slowly got bigger,' says Peter Buisman in the magazine Kate early 2011. Buisman is an involved resident in Ommoord, who came into contact with the heirs and then took care of the artwork when it was in a sorry state. The rightful owner could not be traced, and the sub-municipality and municipality could not invest in the restoration of the polyester. After consultation with BKOR, Buisman founded the De Witte Bollen Foundation, which arranged financing for the restoration. Tom Waakop Reijers, an artist who was still taught by Hans van der Plas, who has since passed away, restored the work. The skin and steel reinforcement have been repaired and provided with a fire-retardant layer. In magazine Kate Peter Buisman is portrayed as one of the new patrons: citizens who adopt an image from their environment out of love for art. The unveiling of the restored statue was done by mayor Aboutaleb and took place on August 27, 2011 in front of the Romeynshof cultural center at the Hendersonplaats in Rotterdam-Ommoord.

The Rotterdam artist Hans van der Plas (Rotterdam, 1925 - Rotterdam, 1991) is a son of monumental artist Adriaan van der Plas. He attended the Rotterdam Academy for Visual Arts, after which he developed into a versatile artist. He trained himself in various techniques, for free work (gouaches, graphics) and on commission. He made a number of murals, stained-glass windows and sculptures, the XNUMXs being his most productive period. Van der Plas frequently chose Rotterdam as a source of inspiration.