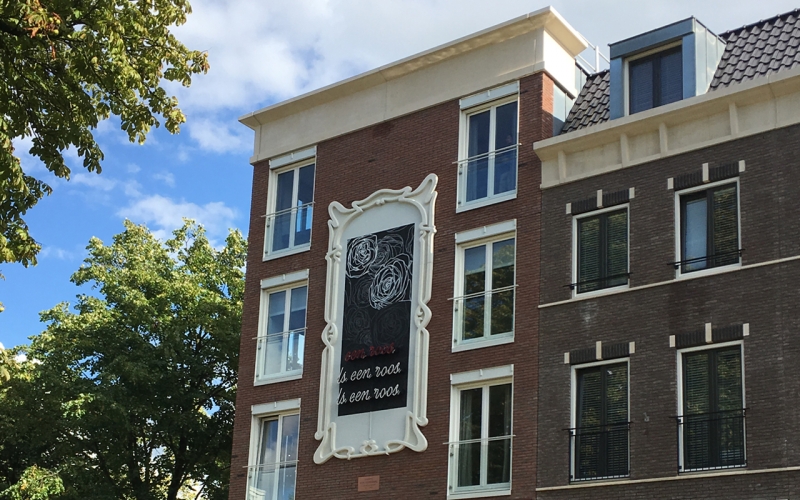 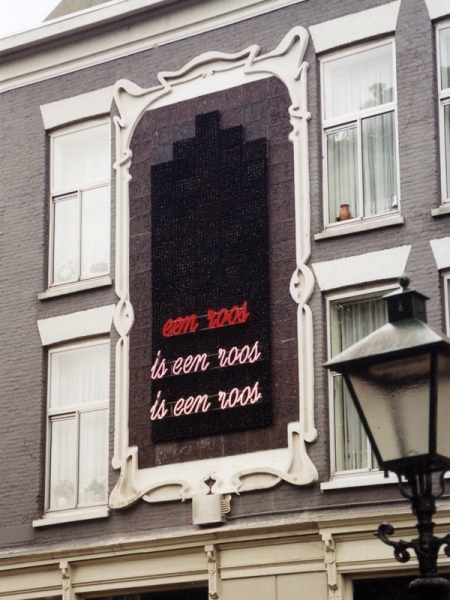 In 1999, four years after the death of the Rotterdam artist Ben Admiraal, he was honored by a close collaboration of good friends, the Noordereiland residents' association, Stichting Maatschappij voor Volkswoningen and CBK Rotterdam. A tableau was made using preserved original clay roses by Admiraal from 1994, made during the art event 'De Buitengalerij'. They were placed in an ornamental frame, a frame in which advertisements used to be painted. In front of the tableau, the text 'A rose is a rose is a rose'posted. The neon changes in color from warm red to almost white. 'A rose is a rose is a rose"is a translation of the line of poetry"Rose is a rose is a rose'from the poem Sacred Emily by the American writer Gertrude Stein (1874-1946). The article 'a' has been added by the makers. The residential block on which the work hung was demolished in 2014, causing the artwork to disappear. But the residents of the Noordereiland have returned a new version of the homage to Ben Admiraal in 2017 thanks to Woonbron. Above the neon line, roses are arranged in white lines on a black background.

The Rotterdam artist Ben Admiraal (1941-1995) was a sculptor, photographer, draftsman, collagist and wall painter. He got his inspiration during long journeys, but also at home in Rotterdam, where many cultures go together. He incorporated his impressions into his installations and objects made from various material combinations, such as wood with a neon tube. Since his stay at 1991 in the Ceramic Work Center in Heusden, he has experimented a lot with clay in combination with metal or porcelain. He then also began making clay roses, leaf by leaf shaped by hand. By executing this in black firing clay, they got a romantic but dramatic charge. He had his studio on Noordereiland, which he shared with ceramist Dora Dolz.