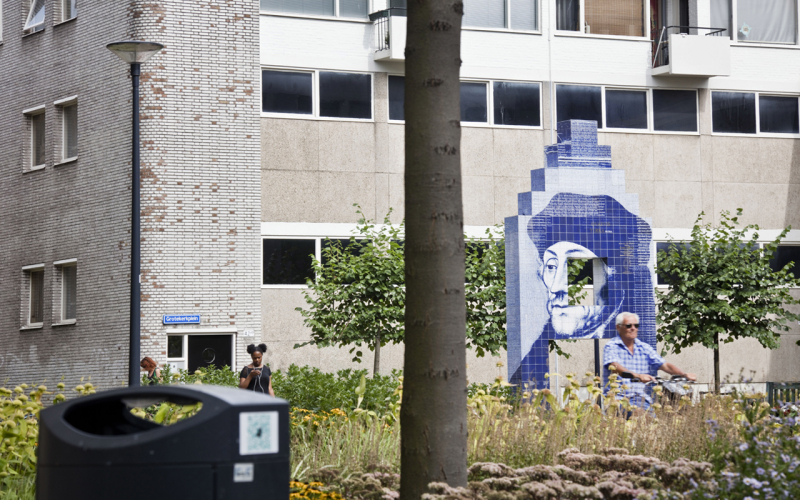 In 2010, at the request of the Municipal Executive, the 'Erasmus Icon of Rotterdam' Foundation (Committee Erasmus) was established to promote the positioning of Erasmus in the Rotterdam cityscape. The Erasmus Committee therefore organized a competition in 2014. In 2015, the winner was announced by the jury, led by Alderman Hugo de Jonge. The jury called the design by Diana de Graaf, Maaike Disco and Reinier de Gooijer photogenic, well placed in the green courtyard and an attractive place for recreation. They designed a mock free-standing façade of Erasmus's birthplace, which is covered with more than 1400 ceramic tiles. Space has been saved at the bottom of the facade for sitting. The portrait of Erasmus is depicted on the tiles. But the closer you get to the facade, the more the portrait dissolves and texts become visible. The winning memorial was unveiled by Mayor Aboutaleb on October 28, 2016.

Diana de Graaf, Maaike Disco and Reinier de Gooijer designed the birthplace of Erasmus. As an occasional trio they jointly submitted a design for the organized competition to mark Erasmus's birthplace. Diana de Graaf (Rotterdam) was a consultant in this project, Reinier de Gooijer (Groningen) is an architect and Maaike Disco (Groningen) is a graphic designer.