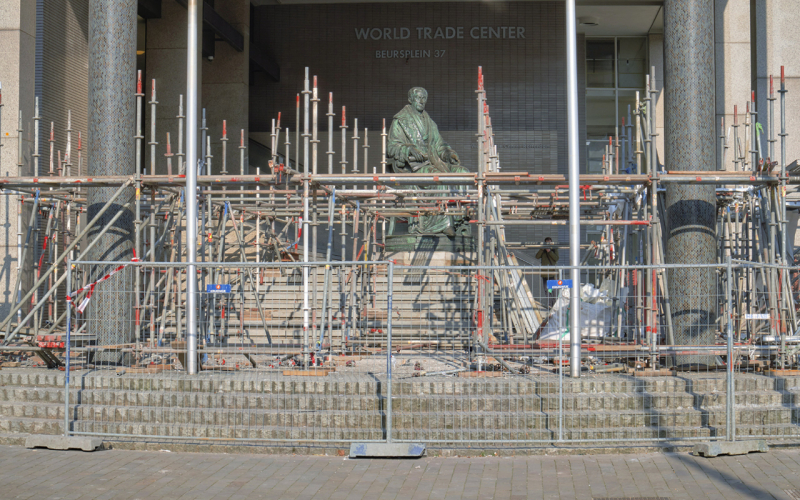 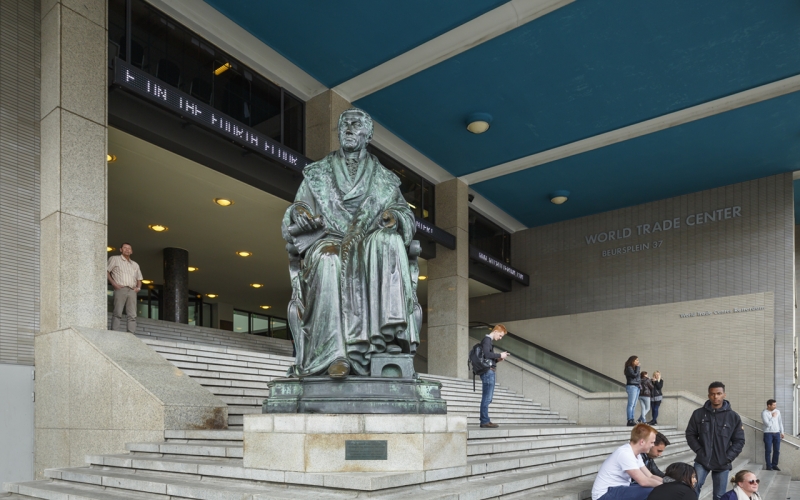 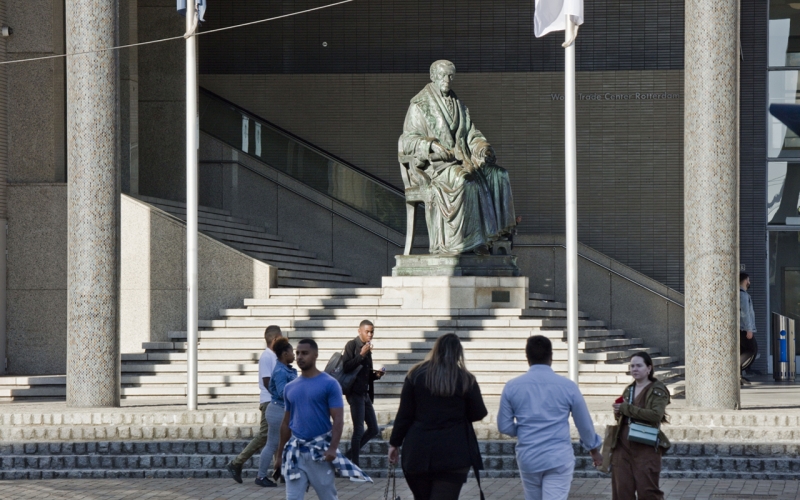 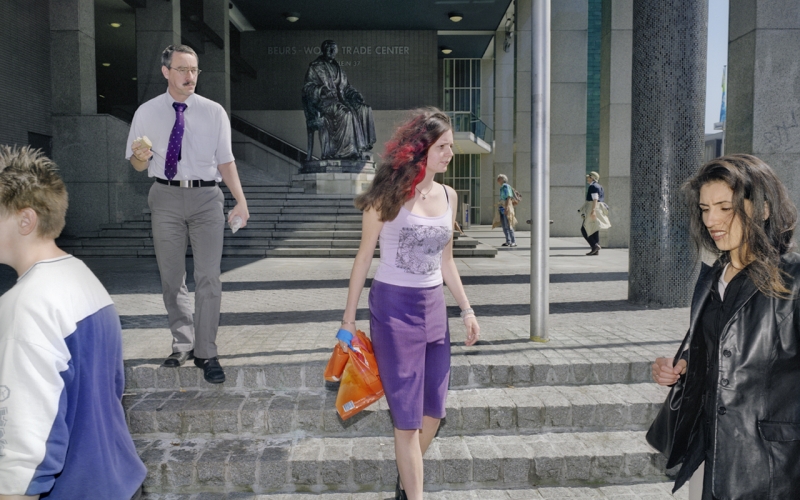 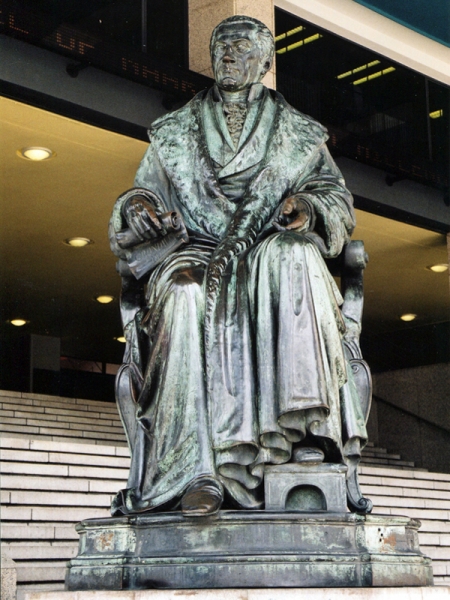 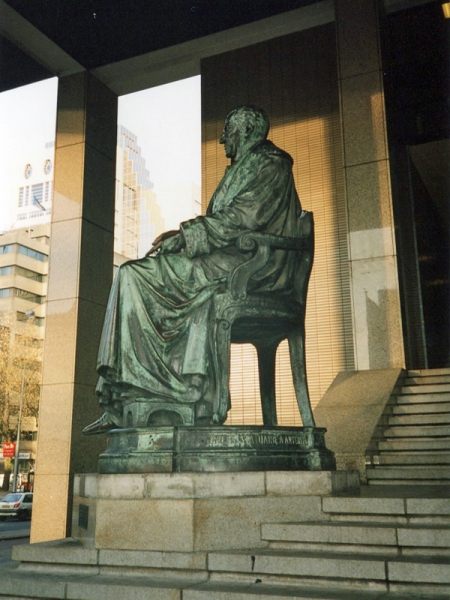 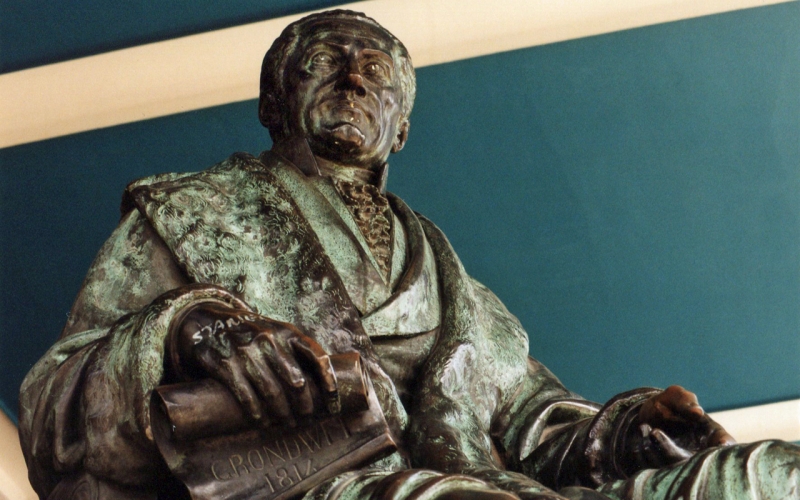 The arrival of this image from Gijsbert Karel van Hogendorp was seen in 1867 as something very big. In the mid-19th century, the proponents of free trade - to be found in large numbers in Rotterdam - and protectionism fiercely opposed each other. Although the proponents of free trade were clearly winning, in 1863 - the year in which half a century of independence was celebrated - they wanted to defy their opponents by erecting a statue of statesman Gijsbert Karel van Hogendorp (1762-1834). He was 'Designer of our Constitution' and (especially) 'Supporter of Free Trade', as was stated on the pedestal at the unveiling by King William III in 1867. Van Hogendorp was born in Rotterdam. He revealed himself early on as a fierce Orange customer in the disputes between prince and patriots. After Stadholder William V resumed his authority in 1787 with the help of Prussian troops, Van Hogendorp became the pensioner of Rotterdam. In the French period (1795-1813) he did not hear much. After the departure of the French, he and Frans Adam van der Duyn van Maasdam (1771-1848) took over the General Board on 20 November 1813 in anticipation of the arrival of the prince, the eldest son of William V, from England, who was inaugurated on December 2 in Amsterdam as sovereign Prince William I. Van Hogendorp was involved in the drafting of the New Constitution, which strongly reverted to pre-1795 relationships. The king was able to gain almost all power. Van Hogendorp aspired for himself a post as a pensioner, a kind of prime minister with great powers. After the statue was completed by the Belgian sculptor Jozef Geefs, after a long search it turned out that there was only room behind the Schielandshuis (the then Museum Boymans), although at the time it was the outermost edge of the city. During the war, the statue was transferred to the Boymans Museum for safety and set up on the terrace. A small drama preceded the return of the statue after the liberation, because on 13 August 1945, in honor of the English Fleet, a statue of Schout-by-night Karel Doorman was placed on the pedestal of Van Hogendorp. This was a plaster clad carpentry by Adriaan van der Plas, who at the time should have delivered it in 14 days. After the closing of the fleet exhibition, the statue of Doorman remained on Van Hogendorp's pedestal until it was destroyed. On November 4, only the bits and pieces of Karel Doorman were found with the words: "If you want to honor your sailors, try not to blame the artist." On May 9, 1946, Van Hogendorp himself was placed on his pedestal again. Due to the construction of the garden of the Historical Museum, the statue had to be moved. In 1961, Van Hogendorp was placed on the back of the Beurstrappen steps. In the 1980s, the statue took its current place on the front of the landing at the entrance of the World Trade Center (WTC). The statue was removed from the landing in April 2020 and is being thoroughly restored. The main entrance of WTC Rotterdam is undergoing a major transformation with the arrival of two escalators in the landing.  Gijsbert Karel van Hogendorp a new place is being sought around the WTC.

Jozef Geefs (Antwerp, 1808 – Brussels, 1885) was a Belgian sculptor. He was educated at the Royal Academy of Fine Arts in Antwerp and at the École des beaux-arts in Paris. In 1836 he won the Prix de Rome. In 1841 he became a teacher of sculpture and anatomy at the Academy in Antwerp and in 1876 he became director.