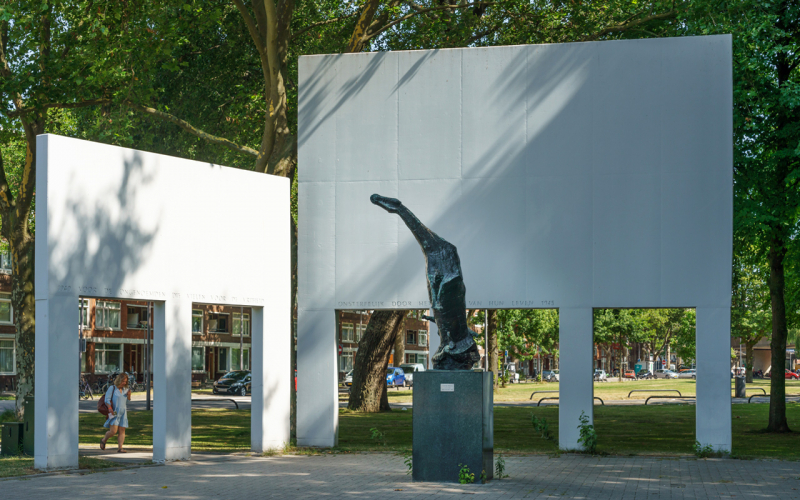 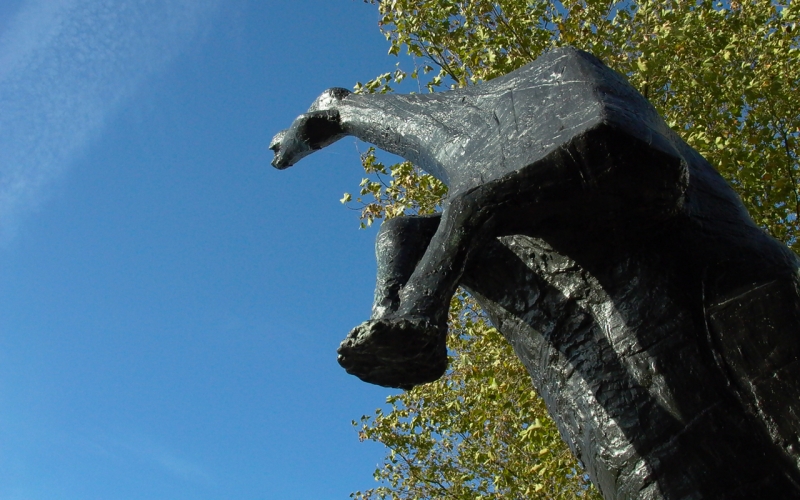 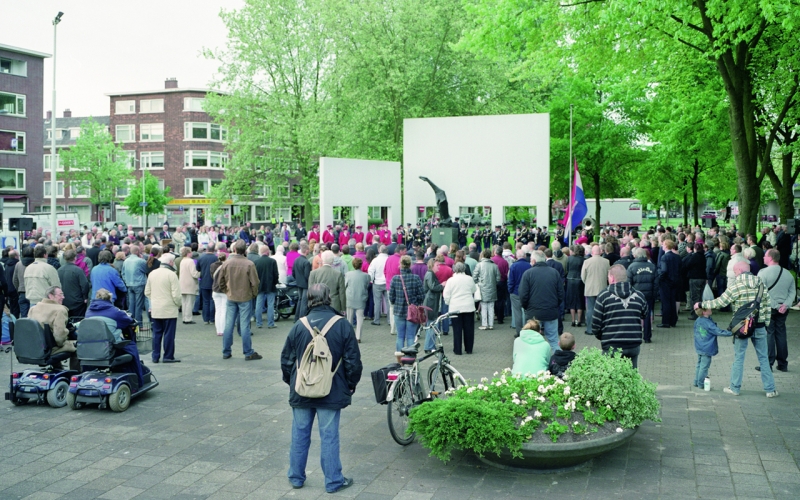 In 1954 the Committee for the Establishment of Memorial Rotterdam had transformed itself into the Stichting Herrijzend Rotterdam. In addition to realizing resistance monuments, the foundation also wanted to promote the overall urban beautification by initiating new artworks. Without 'perfected promotion techniques', this group of representatives from the bourgeoisie, the business community and the city council managed to acquire 'a lot of money from the wealthy side' again. In this way the city also obtained this image Il grande miracolo (The great miracle) by the Italian sculptor Marino Marini in South Rotterdam - the statue is usually referred to in Rotterdam as 'the falling rider'. On March 12, 1945, German soldiers shot twenty Dutchmen on the Pleinweg (and another twenty on the Hofplein). It was a retaliation after an attack on two members of the German secret service. Art experts on the board of the foundation, including Freek Brevet and Coert Ebbinge Wubben, had worked hard for Marini, who had just received a retrospective at Museum Boijmans. The artist created an abstract equestrian statue, in which fear and dismay were expressed. But the initiators, organized in the Comité Opichting Pleinweg Gedenkteken, were shocked by the design. This time, however, the board of the foundation convinced its members and financiers and could Il grande miracolo on May 3, 1958. After being relocated a number of times, the sculpture was given a setting of white concrete inserts in 1988 to prevent it from sinking into its surroundings, designed by architect Maarten Struijs. For more information: Sculpture International Rotterdam.

Marino Marini (Pistoia, 1901 - Viareggio, 1980) was one of the most famous Italian sculptors of the modern era. He started his studies in 1917 at the Accademia di Belle Arti in Florence. Although he also painted and drew, sculpture was his main art form. In 1935 he won the Quadriennale di Roma and in 1936 Marini moved to Switzerland, where he often met the sculptors Alberto Giacometti, Germaine Richier and Fritz Wotruba in Zurich and Basel. His participation in an exhibition in New York in 1950 led to encounters with artists such as Hans Arp, Max Beckmann, Alexander Calder, Lyonel Feininger and Jacques Lipchitz. In Europe he visited the sculptor Henry Moore in London and exhibited works in Hamburg and Munich. He was invited to the Documenta I in 1955 and III in 1964 in Kassel. Marino Marini was inspired by the archaic period in Greece and by the design of Etruscan art. The motifs of female nude, portrait busts and riders on horseback are the central themes of Marini's work. His work has become more and more abstract over the years. His works can be found in all major museums and sculpture parks, as well as in many cities in public spaces around the world.