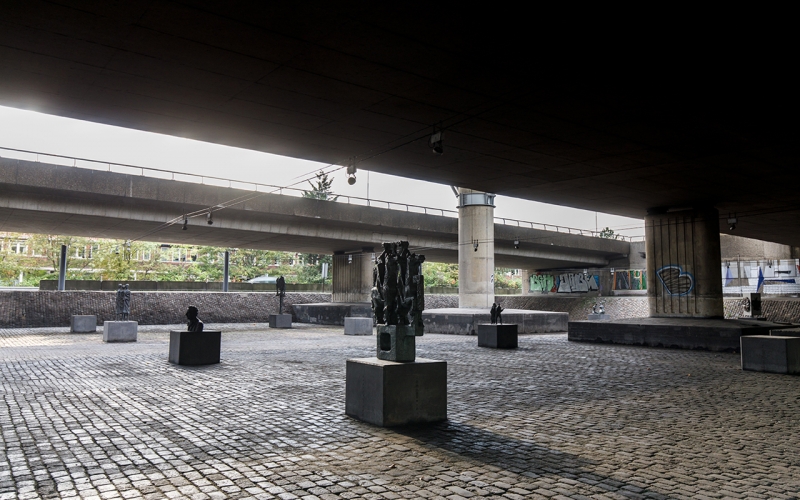 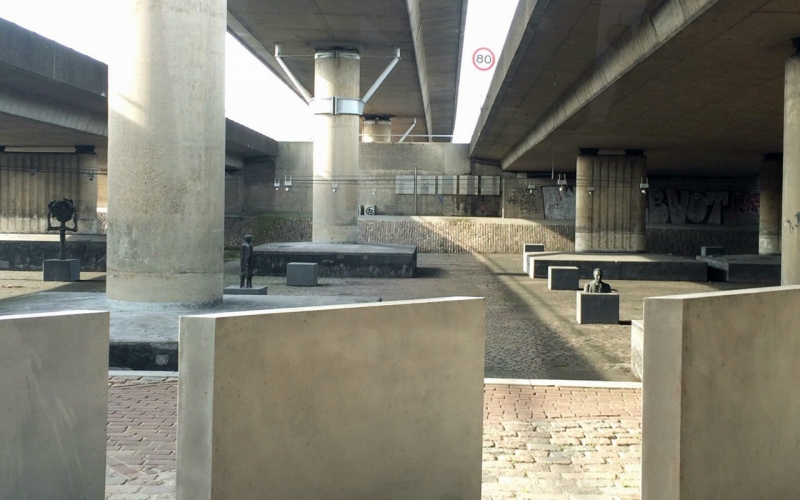 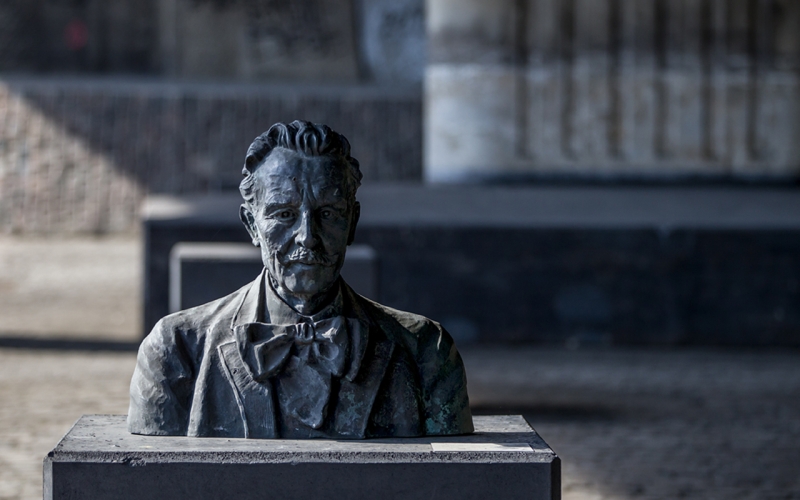 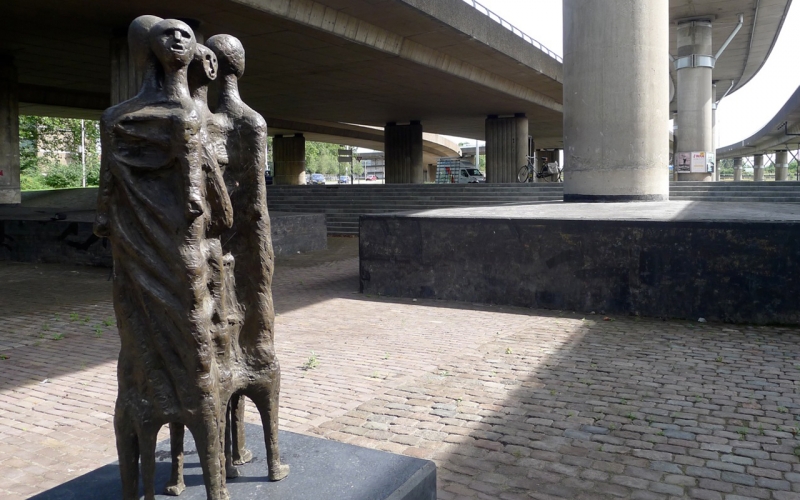 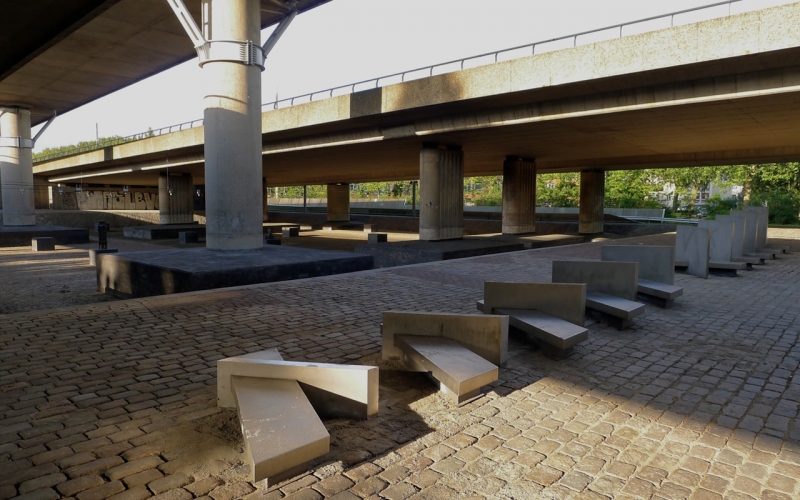 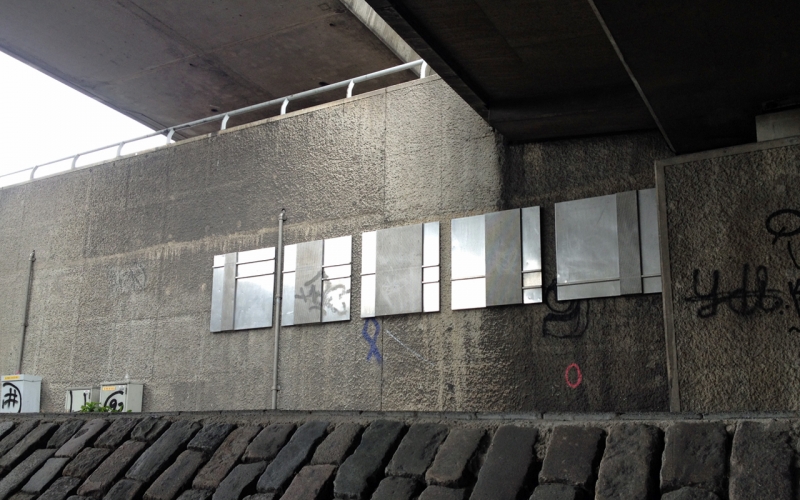 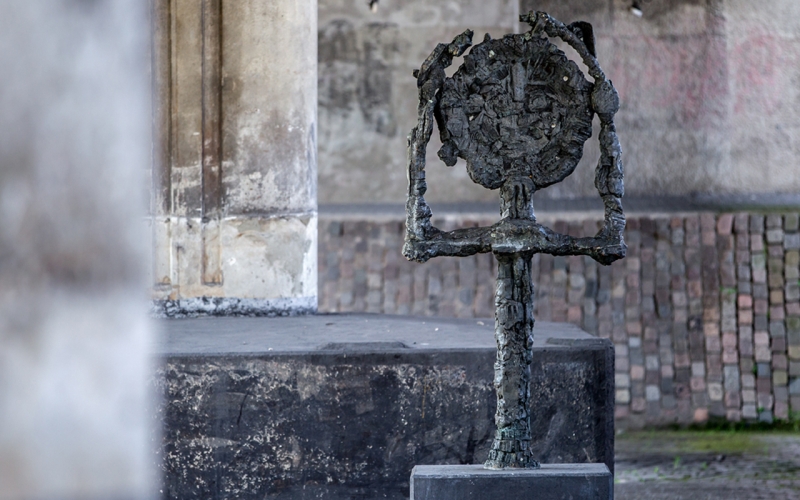 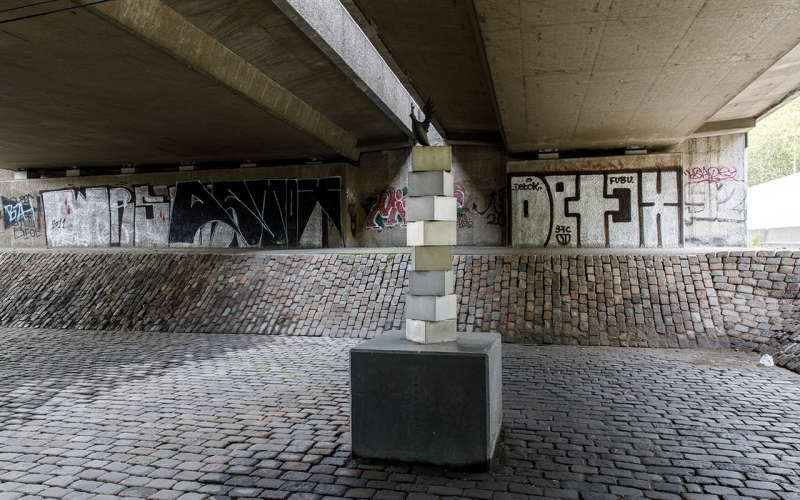 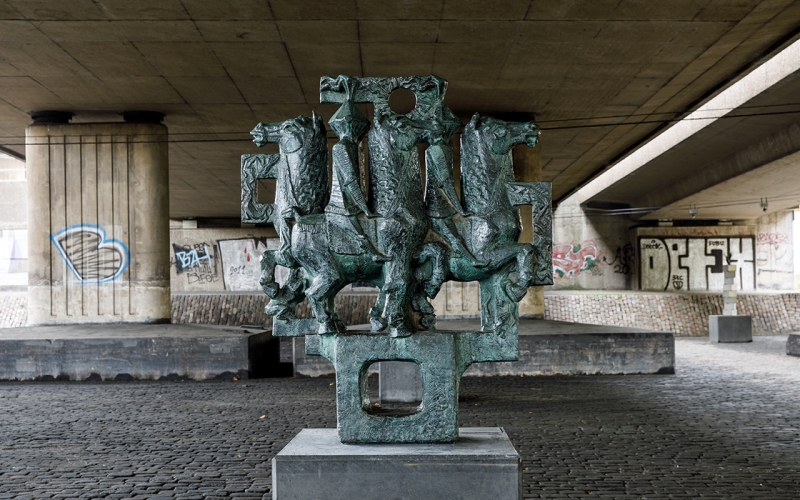 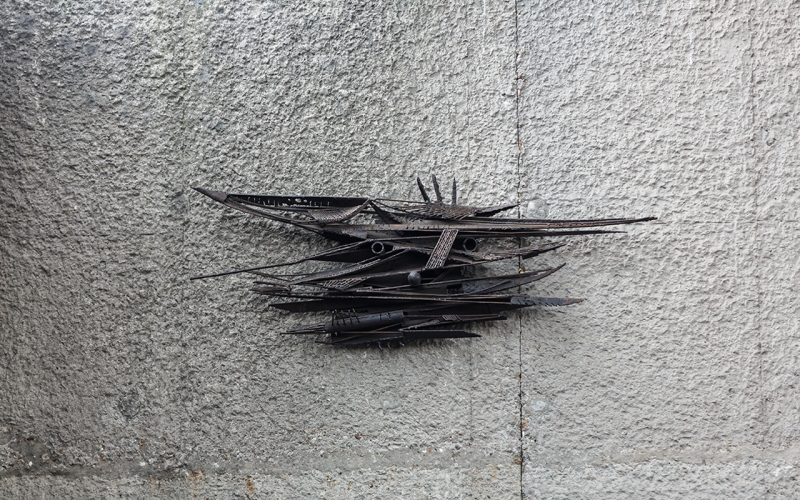 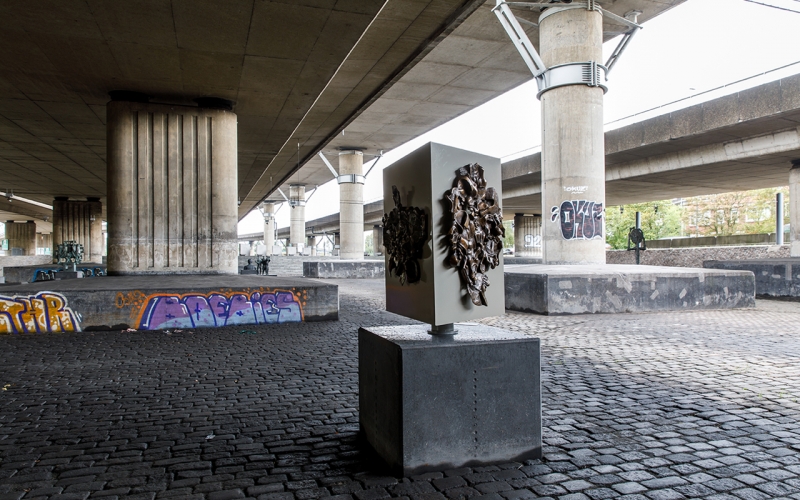 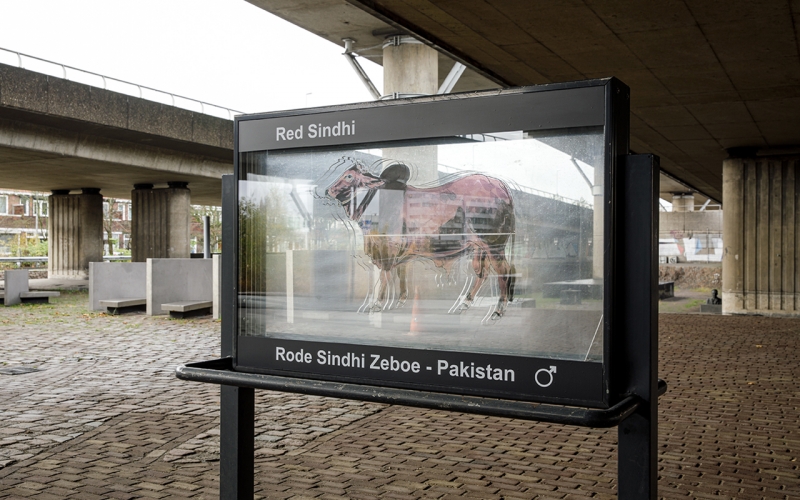 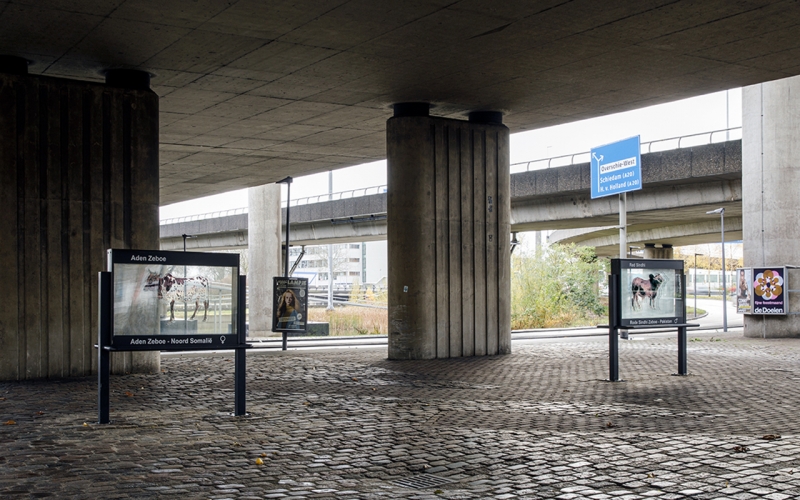 Kleinpolderplein (1968) is the largest traffic junction in the Netherlands. It is expected to become car-free within ten years. That is why in 2011 CBK Rotterdam and Observatorium started a sculpture park under the flyovers. 15 black pedestals are placed in a grid, which are filled with orphaned images; these are works of art that are 'left over' or 'have to go' elsewhere in the city for one reason or another. The design for the museum of orphaned images was done by Diekman Landscape Architects.

Three works of art were placed in the autumn of 2012:
- A bust of it Bernard Diamant (1872-1936) from Han Rehm. Bernard Diamant was a musician, conductor and director of the Koninklijke Christelijke Oratorium Vereeniging Excelsior. The bust was originally placed in De Doelen on January 31, 1938. It was a tribute to a great Rotterdam talent. Artist Han Rehm (Rotterdam, 1908 - 1970) made the famous sculpture, among other things The load carrier, placed on Hillelaan in 1950 and later moved to Waalhaven.
- Sculpture by artist Ru de Gier (Rotterdam, 1921 - 2004), of which the title and origin are unknown. A typical reconstruction performance. Probably made for a primary school that has since been demolished as part of the percentage scheme for visual arts, circa 1963. De Gier was a specialist in this genre.
- Artwork without title Wim van der Horst (1949) and George Degenhart (1936) consisting of ten stainless steel elements. Originally placed in 1989 on the Ammersooiseplein as part of the urban renewal of the Agniesebuurt. In 1994 the elements were moved to Benthemplein. In 2012 this square was redesigned and CBK Rotterdam was approached to relocate the 'benches'.

In 2015 it became Solar head of Carel Kneulman placed on the Kleinpolderplein. Kneulman (1915-2008) was an experimental sculptor and best known for the image The sweetheart (1960) in Amsterdam, the meeting point of the Provo's. The wall relief Blooming celebration (1955) at the former Thalia cinema on the Kruiskade is also by him. The expressive Solar head (1963) is a flat bronze plastic of 2 meters high and used to stand on a schoolyard. December 2019 is it Solar head On loan for five years to the Municipality of Amsterdam and the Willemspark Housing Association. The statue is temporarily in the park of the Emmaplein among other works of art by the artist collective Groep A'dam.

Two more works were added to the sculpture park in 2016. Work Shifts consists of five stainless steel plates, which were found in a depot. These plates were part of the ten benches by Van der Horst and Degenhart, which were already placed in the sculpture park in 2012. In this way the artwork can be seen again in its entirety. There is also a stainless steel tower with a pigeon placed on top, from the Heemkerk school in Feijenoord. Artist and year of this work are unknown.

Five works were unveiled on Kleinpolderplein on September 29, 2018:
- Sculpture Two kneeling figures (1975) from artist Leo van Oudheusden. Van Oudheusden (1946) is considered the artist of Rozenburg, the village where he was born. His most famous work is the colored tile wall 'Water', which he made in the 1970 years in swimming pool De Zeehond in Rozenburg. Thousands of children and adults became so familiar with his work. The artist also made a series of sculptures for Rozenburg. He was particularly interested in the human figure. He focused on elementary human emotions such as love, sympathy and a sense of community. The image Two kneeling figures was originally made for the park near De Zeemeeuw daycare school. Later the statue moved to the Laan van Nieuw Blankenburg. Attempts at theft, however, forced Rozenburg to store the sculpture. In 2018 this work was included in the museum room of the Kleinpolderplein. December 2021 the work was removed. It will be returned to Rozenburg.
-  Double horse figures (1964) by the Rotterdam sculptor Martin Slappendel (1930). He did a lot of work for municipalities and school boards. Also in Rotterdam. For the Samsam primary school on Molièreweg he made the playful, bronze sculpture Carousel (1965). A year earlier, Slappendel designed the striking image during the construction of the Petrus Datheenschool in IJsselmonde Double horse figures (that was popularly called 'Ruiters'). His images appear flat and two-dimensional at first glance, but still show strong dynamics. Associations are evoked with ancient folk art, perhaps with the Middle Ages, or with fairy tales and children's books. If sculpture is Double horse figures ideally suited for children. The statue unfortunately fell victim to the renovation of the schoolyard.
-  Tommy Ladnier Blues (1968) by Pim van Moorsel (1932), who studied in the 1950 years in The Hague with the famous artist Albert Termote. Sculptor and industrial designer Van Moorsel designed these music-making figures as part of the construction of De Kemphaan primary school in Rozenburg. The statue is an ode to the trumpeter Thomas James ('Tommy') Ladnier (1900-1939). This jazz legend played with Ma Rainey, King Oliver, Fletcher Henderson and Sidney Bechet. The fact that the image was realized at a primary school suggests that Van Moorsel considered music education to be of paramount importance. During the revitalization of Rozenburg, the statue disappeared into a storage shed. In 2018 the work was withdrawn from oblivion and placed in the museum room of the Kleinpolderlein. The work will be removed in December 2021 and will be returned to Rozenburg.
-  Bird's eye view (1960) made by Gust Romijn. Romijn (1922-2010) is one of the most famous and most flamboyant artists of post-war Rotterdam. In 2016, a bridge was even named after him in Charlois (this pedestrian bridge to the Waalhaven is located near his former farm and studio). As a sculptor, graphic artist and painter he exhibited at home and abroad. He received international awards, took part in the World Exhibition in Brussels (1958) and made ten sculptures for the public space of Rotterdam. His most famous works are The bobber in IJsselmonde and the Shooting disc on Katendrecht. Romijn experimented with numerous materials. This metal plastic was purchased in 1960 by the Rotterdam Art Foundation. However, the work was never shown in public space. Thanks to the efforts of the Kleinpolder Working Community Bird's eye view first shown to the public.
- The letters EALA (1979) are engraved in the fifth work, but the maker, title and origin of the work are unknown.

November 2019 there were two works from it Project Polder Avenue (1999) placed on the Kleinpolderplein. Due to the refurbishment of the Polderlaan in Feijenoord, these very damaged works of art had to make way. In consultation with artist Joe Cillen (1945), two of the six cows were spared and beautifully refurbished. The cow breeds Red Sindhi Zebu and Aden Zebu are now under the flyovers in the sculpture park. For more information Kleinpolder Working Community Foundation.