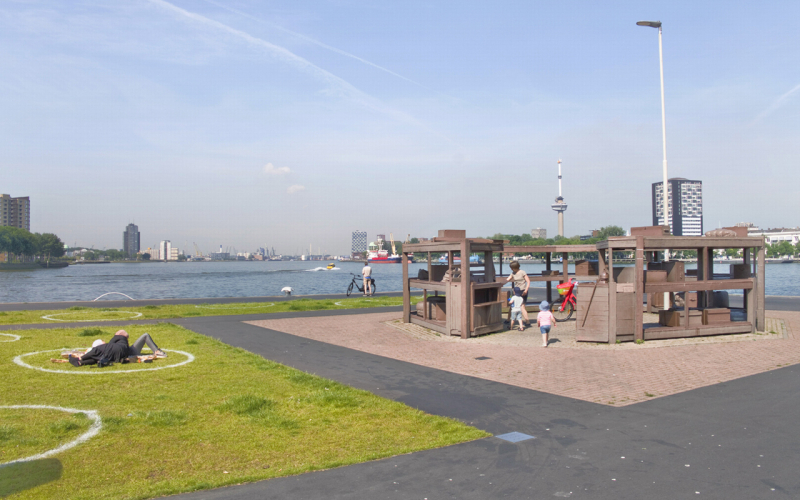 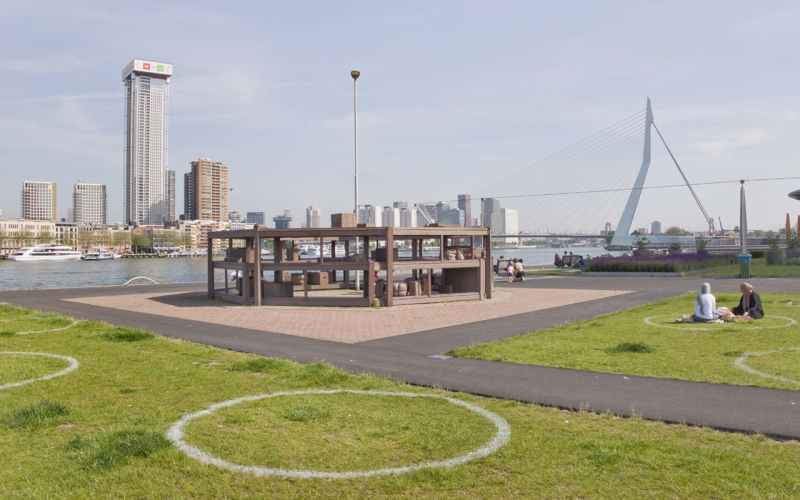 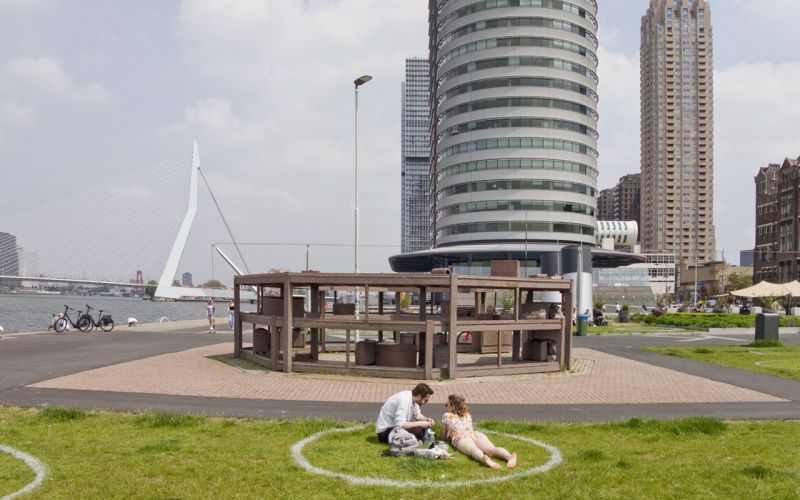 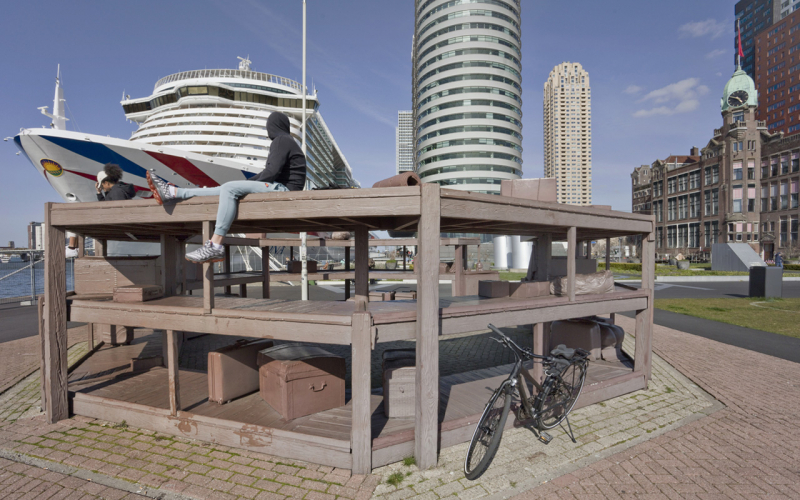 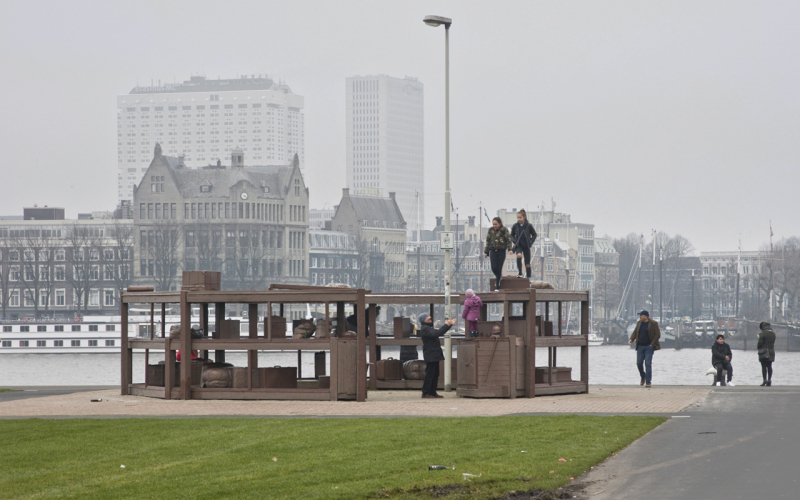 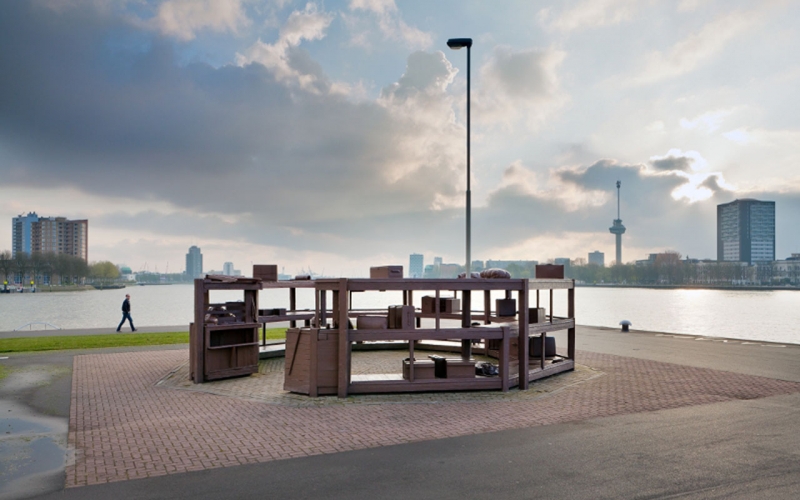 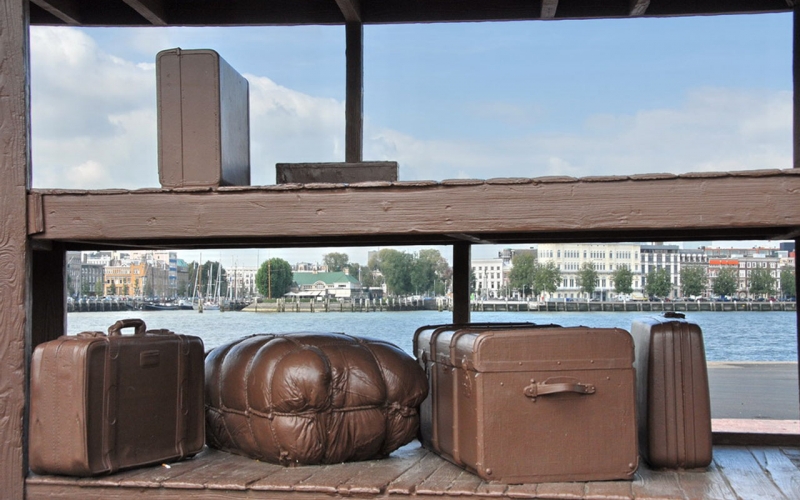 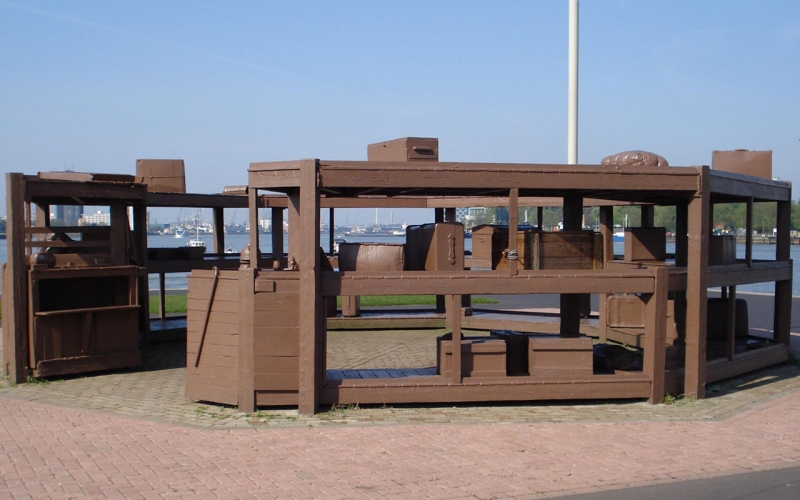 Canadian artist Jeff Wall was commissioned in 1996 by the City of Rotterdam to create a sculpture that would commemorate 50 years of reconstruction and 650 years of city rights. The national government financed the monument as a gift to Rotterdam. The location of the sculpture is a reference to the history of the Wilhelminapier, where emigrants boarded passenger ships of the Holland America Line (HAL) for decades. The monument stands on the square in front of the old office of the HAL, where Hotel New York is now located. Lost Luggage Depot consists of an octagonal scaffold of three levels. Everything is made of cast iron and the total weighs about 65.000 kg. Suitcases and bags are cast in the scaffolding, which is illuminated by a lamppost. The scaffolding itself is also a cast. The suitcases and bags come from different eras. You will find a duffel bag from a hundred years ago, but also a computer bag from a more recent past. Everything is painted in a matte rusty brown color to create a formal cohesion in the image. Although the casts literally come from an existing reality, the image shows a historical dislocation. The monument refers to emigration and the longing for a new future. It shows how people cut ties with their native soil. It is a reminder of those who have left, as well as those who have arrived. The monument is Wall's first sculpture. On November 3, 2001, the statue was opened by then Prime Minister Wim Kok. For more information: Sculpture International Rotterdam

Jeff Wall (Vancouver, 1946) is a Canadian photographer, art historian and visual artist. He started his career as a graduated conceptual artist, but then went on to study art history. After graduating, Wall started taking photographs. He stages his work down to the last detail, or, in his own words, he completely reconstructs a moment. He often uses actors to revive a moment that appeals to his imagination. His photographic scenes often have a mix of natural beauty, urban decay and a postmodern and industrial lack of features as a background; elements typical of Vancouver. He is best known for his large cibachrome photos, which he presents in light boxes. In 2005 Wall's work was featured at Documenta X. In 2007 he was made an Officer of the Order of Canada. In March 2008 he was awarded the Audain Prize for Lifetime Achievement, an annual award for visual arts awarded by British Columbia.