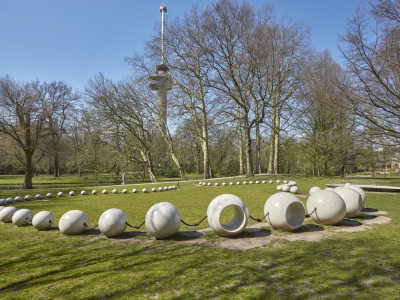 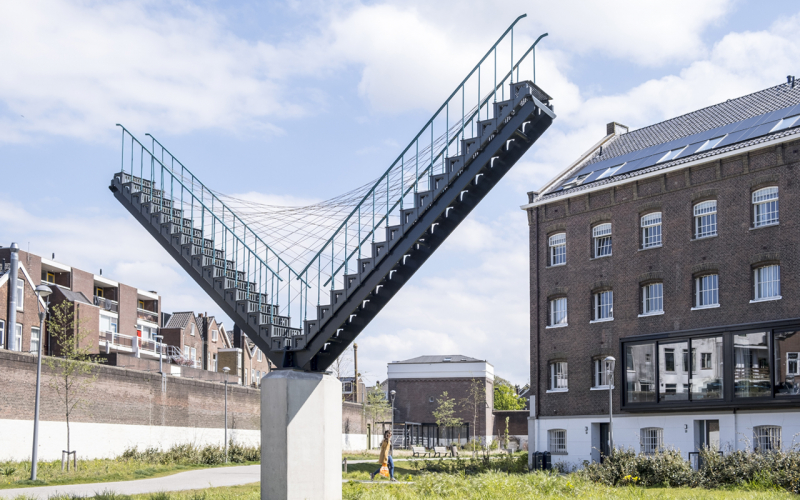 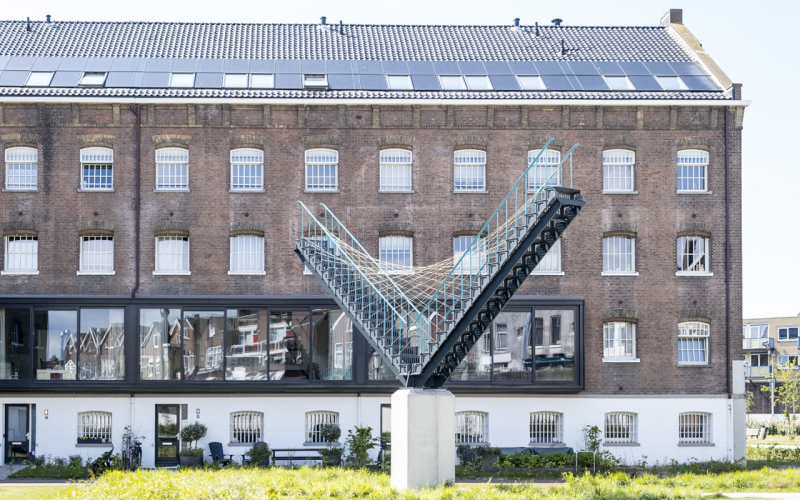 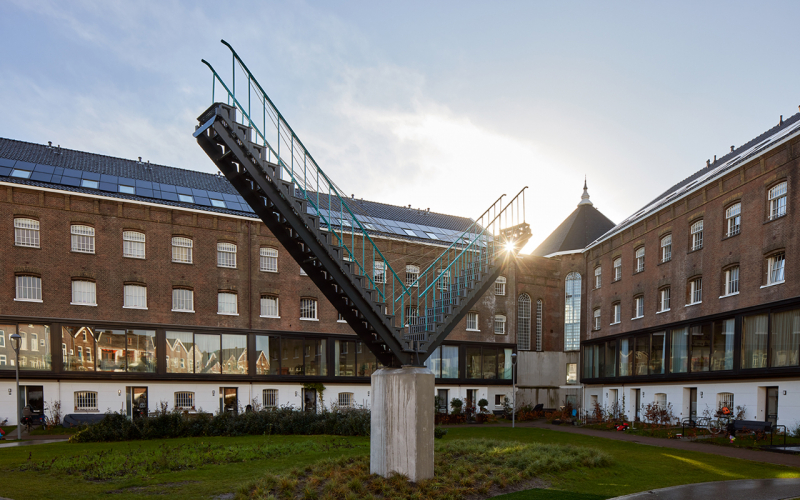 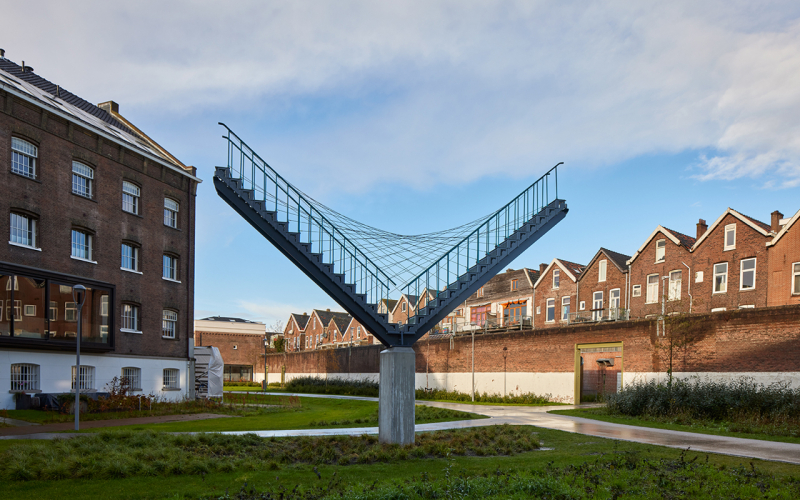 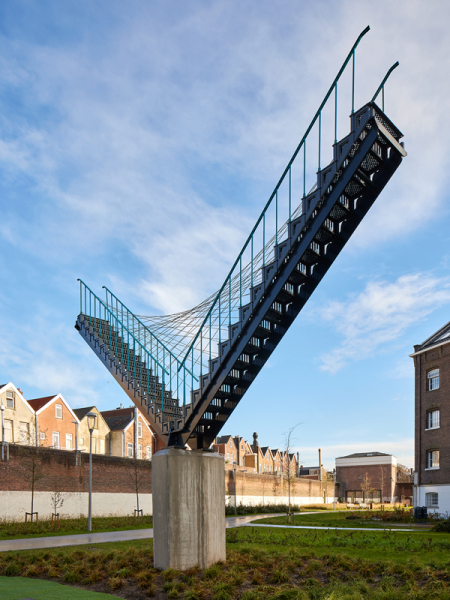 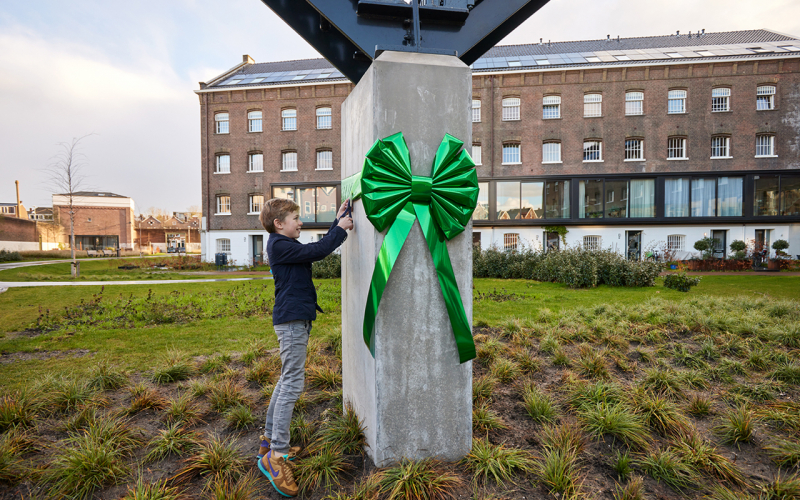 On December 2, 2021, the artwork was Parabola Blues by Madeleine Berkhemer (1973-2019) unveiled. The artwork is a gift from real estate developer HD Groep and is part of the redevelopment of the former prison on Noordsingel into the residential complex. Garden of the North. The gift to the municipality of Rotterdam has been placed in the publicly accessible garden of the residential complex. After an open call from HD Groep in 2019 to artists to realize a work of art for the publicly accessible garden of the former prison, many enthusiastic reactions were received. Together with BKOR, ten visual artists were selected and approached. During the Z files In the program, the diversity of disciplines was discussed and it was possible to become acquainted with the way in which artists contribute ideas about the design of the city and about reuse. The design came from the sketch round Parabola Blues by Madeleine Berkhemer unanimously came out on top. Two staircases from the former prison form a constructivist V on a high concrete base. Golden threads cross the two stairs and give the image dynamism. In its simplicity, the work is both aesthetically pleasing and monumental and acts as a jewel for the environment. Berkhemer searched for the new meaning of the location with this work. With the stairs she found the material that could make the connection between the past and the future. Like the other architectural elements that were spared during the transformation of the prison, all kinds of meanings can be attached to the stairs. Thousands of people walked the steps, thousands of hands touched the railings. In addition to the physical relationship with the stairs, emotions are also associated with these elements. Robin Dijkgraaf, director of HD Groep, and Oscar Hartzema, son of Madeleine Berkhemer, unveiled the artwork together. In honor of the artwork and its creator, former city poet and Poet Laureate Ester Naomi Perquin . wrote up.

Here, in a triumphant V, looking returns. The lively
walk, the uncounted steps of the days before demolition;
the lines of the bars are still in the sky.

The shape turns with it, to pencil point, blade, injection needle. your look
determines the image. Here is no view that you share, at most aspects
of a language that no longer sounds: the rise and fall of
looted days, stolen gold that glitters in the sunlight;
from top to bottom you walk differently than
up from the bottom.

Here remains the step that is missing, the coincidence of the eye,
the step that misses. Distance, too great to measure,
is the smallest distance there is.

Parabola Blues is produced by the HD Groep in collaboration with the Madeleine Berkhemer Foundation and BKOR. The execution was done by Lens BV. read here the Im Memoriam about Madeleine written by Sandra Smets.

Madeleine Berkhemer (Bergen op Zoom, 1973 - Rotterdam, 2019) was a visual artist and photographer. She made sculptures and installations in which sensuality and eroticism are a recurring theme. Berkhemer studied fashion at the Willem de Kooning Academy in Rotterdam from 1992 to 1996. Her work has been shown in galleries and exhibitions and she has collaborated with designers from the fashion world.