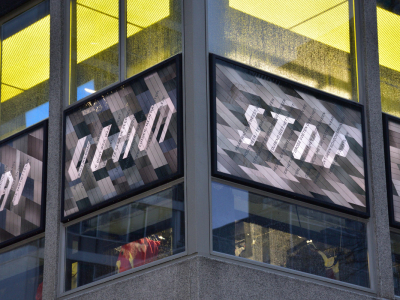 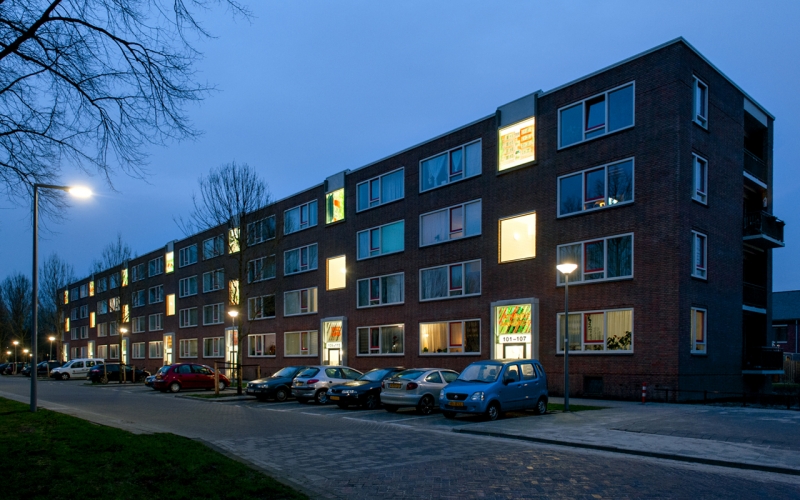 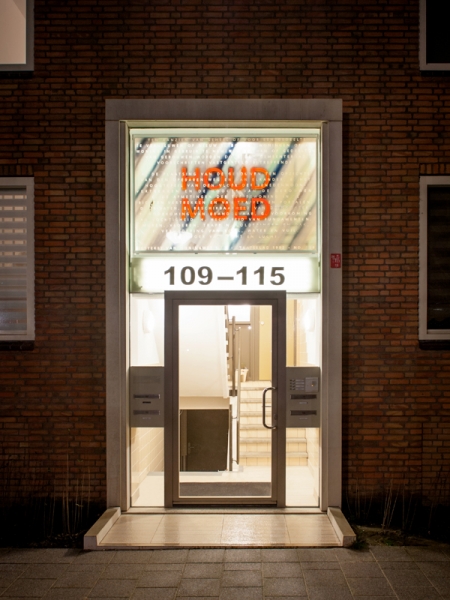 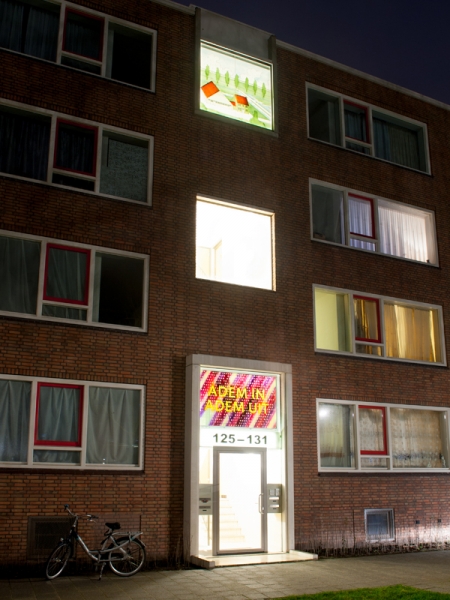 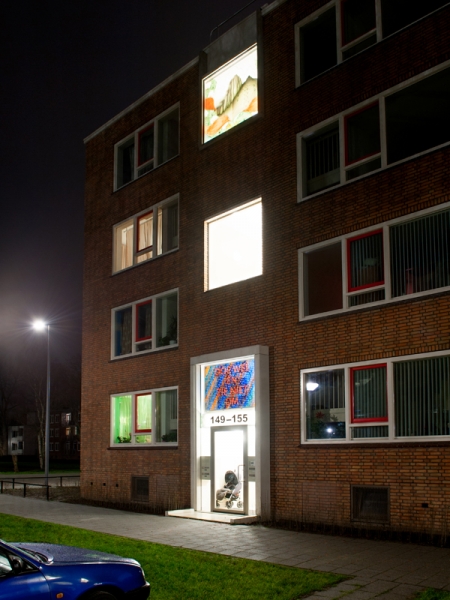 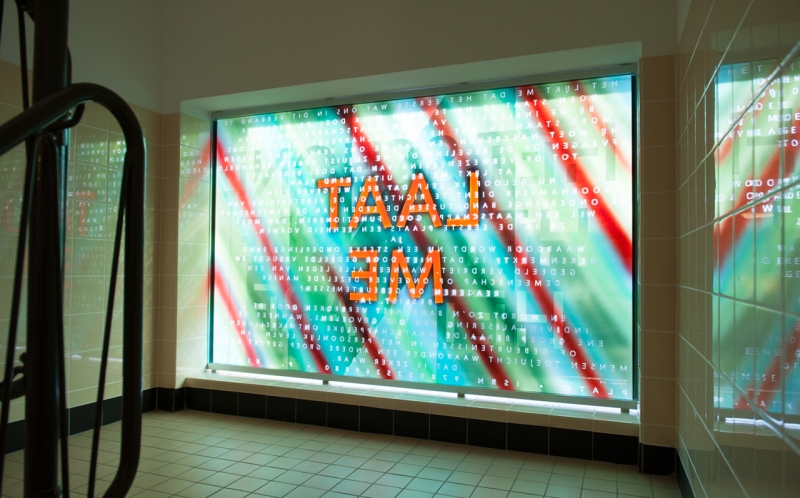 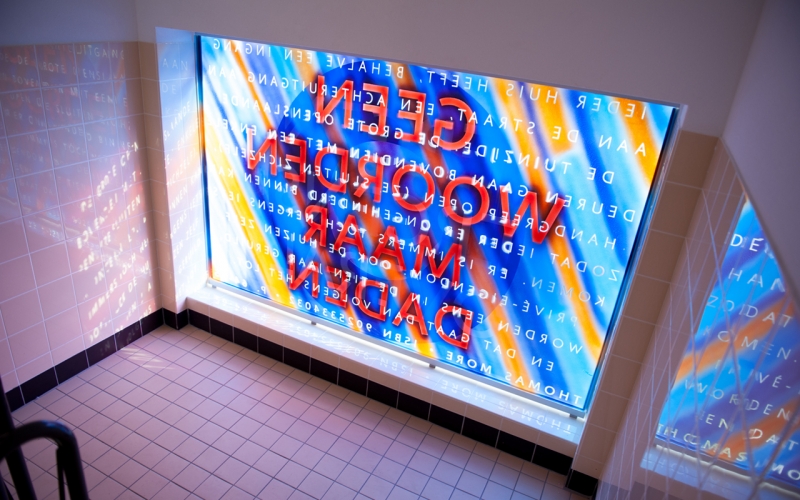 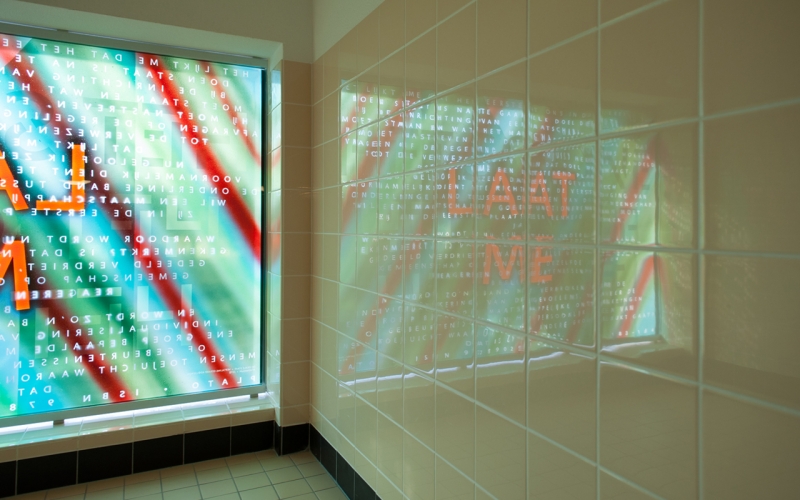 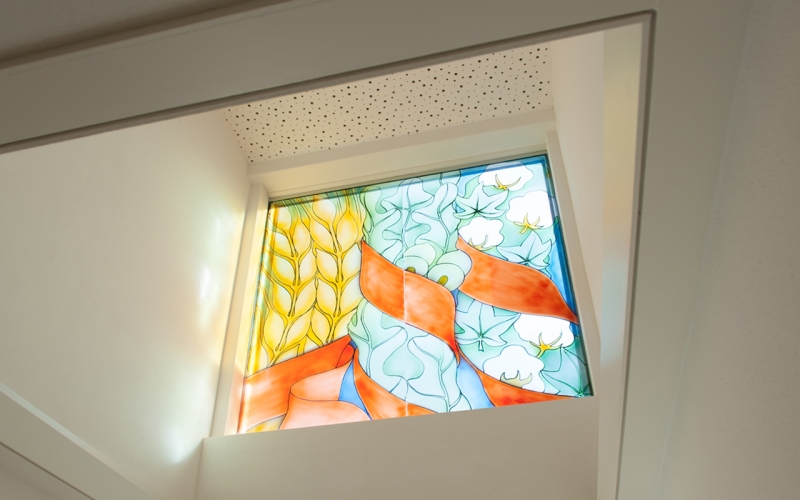 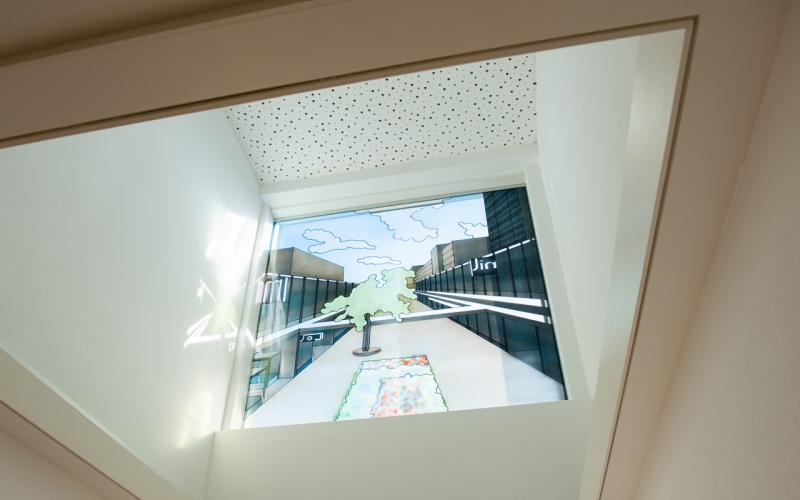 These fourteen glass appliqué windows in the Ooltgensplaat are a follow-up to the project Window Tales I from 2009 and were designed by artists Jan van de Pavert and Milou van Ham. When the Rotterdam residential district of Pendrecht was completed in the 1950s, it was regarded as a jewel of reconstruction. Tourists came from all over the country for this modern design by Bauhaus architect Lotte Stam-Beese. At the end of the last century, little of that original beauty could be seen in the impoverished neighborhood, which led to a year-long renovation project. The original design was the starting point for the demolition, renovation and refurbishment. In 2009 this was met with Window Tales I Awarded: a large-scale art project consisting of fifty-six glass appliqué windows by five artists, narrating the design ideas of the past. Jan van de Pavert cites visual languages ​​of transient utopias that were so defining in the last century. In her text works Milou van Ham extends the idealism from after the war to the present. With this, the total project 'Raamvertelling' has seventy works of art, which turn this renovated neighborhood into a public museum.
Ideologies and utopias are a fixed theme in the work of Jan van de Pavert. His seven enamelled windows for Pendrecht range from landscapes with propagandistic frames from distant lands and times to the highly ordered Dutch architecture of today. It is precisely in Pendrecht that international comparison is appropriate. Here, architect and urban planner Stam-Beese put Bauhaus ideals into practice that she had tested in the Soviet Union and at Le Corbusier's CIAM. After completion of the neighborhood in the 1950s, it would serve as an example for many Dutch residential areas. At the windows of Van de Pavert, Milou van Ham designed seven texts with various texts about utopias. They range from close by, over the Social Housing Act, to the Gilgamesh epic and Thomas More. She also makes the leap from abstract ideals to Dutch applications.
Pendrecht has experienced a major fall. At the time, hailed as the pearl of reconstruction, it would become the second largest problem neighborhood in the Netherlands. As a result, the planned refurbishment of around the turn of the century automatically led to much discussion about the usefulness and guilt of architecture and the applicability of idealism. Afterwards, these subjects received much follow-up in debates in the Netherlands. Van Schagen Architecten brought the original design ideas back to the neighborhood in an updated way, on which the Center for Visual Arts here Window Tales I hooked up. The glass appliqué windows by Ben Zegers are about the abstract patterns of textile artist Stam-Beese; Stubby Gubbels zoomed in on the geometric harmony of the neighborhood; Anuli Croon on the green design; Sarianne Breuker on the family as the cornerstone of society and Milou van Ham composed text frames with texts from Stam-Beese. They are works of art that combine the pros and cons of then and now. Various glass techniques adorned a lot of reconstruction architecture, but there was no money for that in Pendrecht at the time. That shortcoming was made good by Window Tales I en II, with glass appliqué techniques and enamelled glass, respectively.
The windows of Window Tales I can be seen in the renovated porch houses on the Middelharnisstraat and Melissantstraat. Window Telling II is located on the Ooltgensplaat. Both series of windows were created under the artistic direction of Olphaert den Otter. During the unveiling on Monday 28 October 2013 from 17.30 hour on the Ooltgensplaatweg, Walter Bart of theater group Wunderbaum acted as presenter and interviewed the artists. Antoinette Laan (alderman for Sports and Recreation and Art and Culture) revealed the artworks. Frame stories II was established on the initiative of Peter Hakker from Woonstad Rotterdam, in collaboration with the CBK Rotterdam, artist Olphaert den Otter and Firma Woord en Daad (fundraising). The glass plates are made by GBB Tilburg.

Jan van de Pavert (Zeist, 1960) lives and works in Rotterdam. Van de Pavert studied at the Academy of Visual Arts Sint-Joost in Breda and then at the Ateliers '63 in Haarlem. Initially he became known for sculpture, but later he made watercolors (for animated films, among other things) and murals. In 1987 he won the Prix de Rome for his sculpture and in 2015 the Jeanne Oosting Prize for his watercolors.