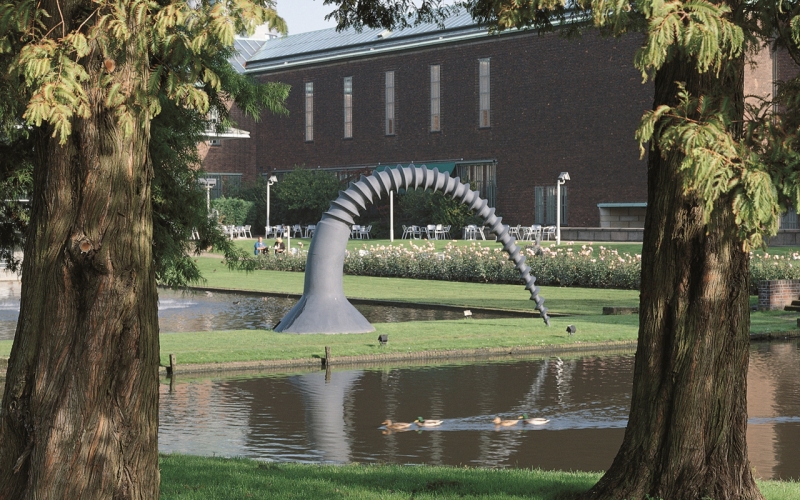 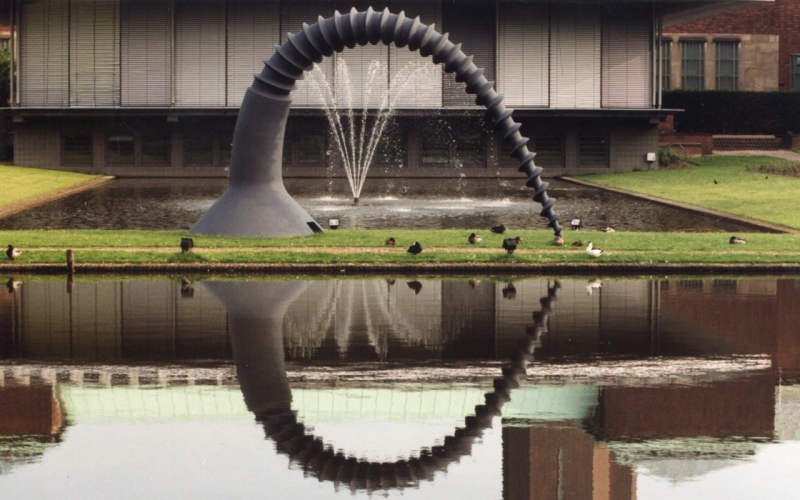 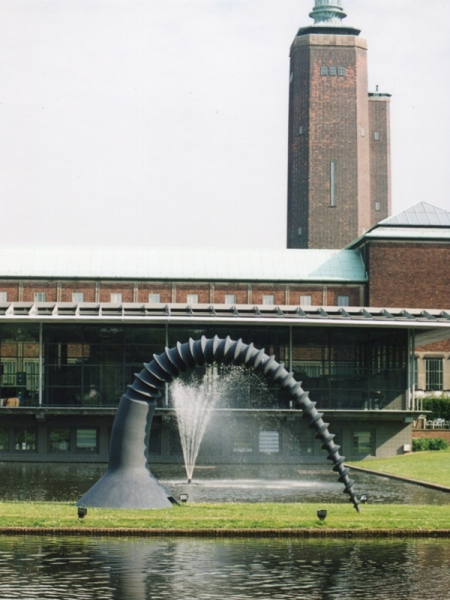 In 1976 Claes Oldenburg temporarily lived in Deventer and was impressed by the many arched bridges in the Netherlands. He often came to Rotterdam for a possible assignment for an object on the Coolsingel, but his project proposal for a huge screw on the Churchillplein turned out to be unfeasible. When Oldenburg heard about a project for the construction of a new Willemsbrug in 1977, he became very passionate about realizing one of his fantasies in Rotterdam: a bridge in the shape of a curved screw. In 1978 Oldenburg, then living in New York, was visited by director Wim Beeren of Museum Boijmans Van Beuningen. Then the idea arose to set up a project around the screw bridge. It was agreed that Oldenburg would work for the museum on a project that would result in a model of the bridge, an etching and a sculpture. The design for a double screw arch bridge over the Maas was not feasible. Oldenburg completed the screw bow project in New York. In October 1982, a colossal screw bow, made in three separate parts, arrived by ship in Rotterdam, along with seventeen working drawings, a model, three etchings and various photos and documentation that formed part of the project. The exhibition for the public took place in the summer of 1983. The Screwarch consists of a curved, aluminum screw. So not straight, as one would expect, but bent, as if the material is limp and hangs under its own weight. Yet the object remains recognizable. Screwarch was placed in the Museum Garden, because the presence of water does more justice to the original idea of ​​the bridge. Due to the renovation of Museum Boijmans van Beuningen and the museum garden, the artwork has been placed in a depot. For more information: Sculpture International Rotterdam.

Claes Oldenburg (Stockholm, 1929 – New York, 2022) developed into one of the most important artists of Pop Art in the 1960s. He grew up in the United States, where he studied art. Oldenburg made collages and assemblages based on the examples of utensils he found on the street. In 1961 he opened The Store, a kind of exhibition in which he offered for sale food and clothing made of painted plaster. He also made huge soft sculptures. From 1965 he made enlargements of everyday objects, which he provided with a monumental magnitude. Since 1976 he has worked with the Dutch/American artist Coosje van Bruggen, whom he married a year later. Together they created more than forty works for the public space of many major cities worldwide.