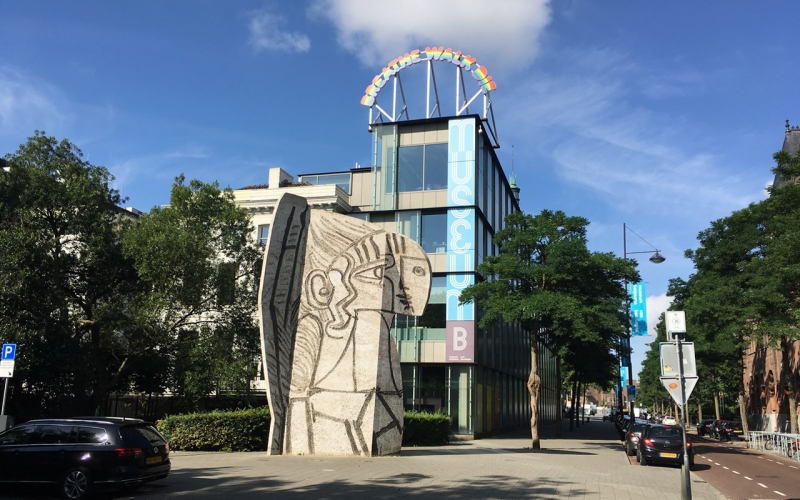 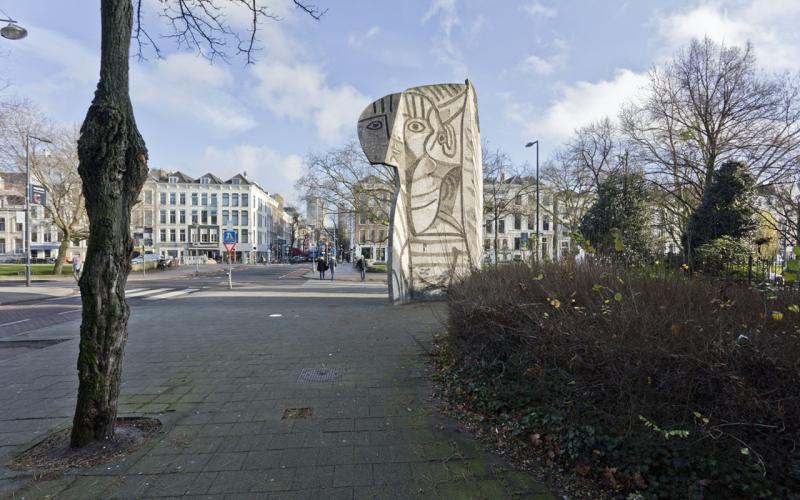 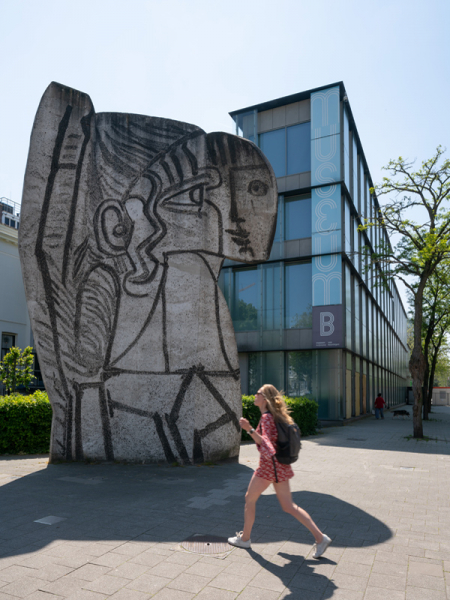 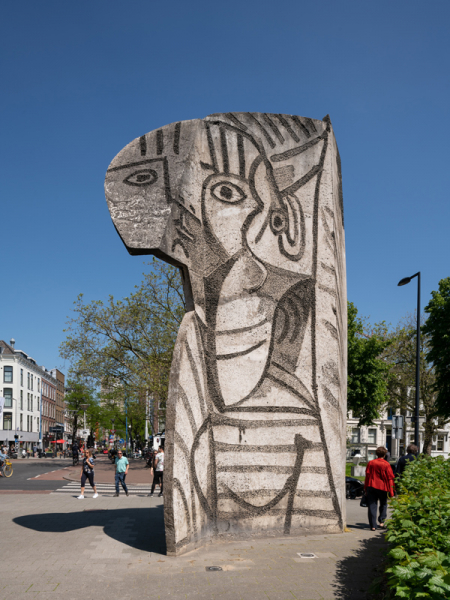 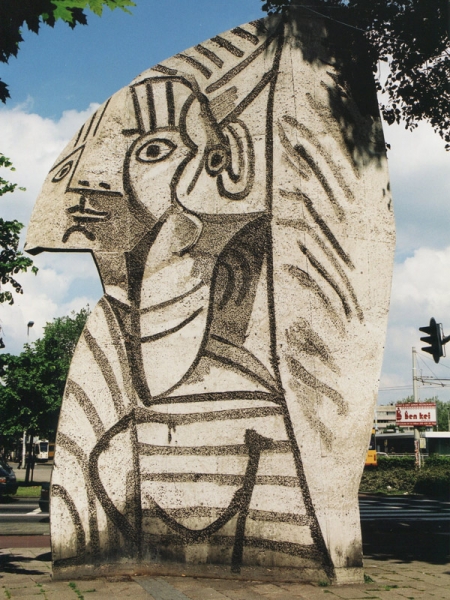 The concrete drawing is of twenty-year-old Sylvette, Picasso's muse, whom he met in the spring of 1954. Picasso was already 73 years old at the time. He drew her with a proud head lifted, a slender neck and hair in a ponytail high on the head. Sylvette acted as a model for about forty drawings, paintings and small spatial installations made of metal. He portrayed her in all the different styles he had ever used in his life as an artist, including the Cubist style, which he had developed with Georges Braque at the beginning of the twentieth century. This Sylvette series illustrates the development of modern art, and more precisely the development of Picasso as an artist. The series also influenced the fashion image in Paris. Girls with the hairstyle and proud posture a la Picasso filled the street scene in the 1957s. In 1963 Picasso became acquainted with the Norwegian artist Carl Nesjar, who invented a new technique with which large constructions could be made. Small black stones were poured into the concrete. Sandblasting revealed the black color. For example, the concrete could be drawn with the sandblast. Picasso was impressed and, using Nesjar's technique, enlarged his drawings into monumental installations. The Urban Embellishment Committee wanted to purchase such a concrete sculpture in 1971, but the population did not like a concrete colossus. In 70 Rotterdam got 'its Picasso' after all. The Bouwcentrum bought the work and donated it to the Municipality as part of the CXNUMX; a post-war event to celebrate the reconstruction of Rotterdam. Picasso's image was to underline the modern and progressive character of the city. Picasso and Nesjar enlarged a tin sculpture to seven and a half meters high and four and a half meters wide Sylvette, sandblasted on front and back. For more information: Sculpture International Rotterdam.

Pablo Ruíz y Picasso (Málaga, Spain - 1881) is considered one of the most versatile artists of the twentieth century. He was not only a painter and graphic artist, but also a sculptor and ceramicist. His work has undergone radical changes throughout his career and he played a part in most of the important art movements of the first half of the twentieth century.
At a young age his exceptional drawing talent showed and he attended art courses in Madrid and Barcelona. In 1904 he left for Montmartre in Paris and became acquainted with artists such as Georges Braque and Amadeo Modigliani. Picasso's first sculptures date from around 1910, the period of Cubism. Around 1930 he made a number of bronze sculptures again. At the same time, his fellow countryman Julio González taught him assembly techniques and Picasso made three-dimensional 'collages' in iron. Later still, Dadaist-looking assemblages, reworking of scrap and found objects, and bronze plastics in various styles were created. He also made models from sheet iron, which he then signified or painted. After the Second World War, Picasso produced a lot of ceramics. In 1948 he had his own ceramic workshop in the village of Vallauris, southern France. There he met in 1954 the then nineteen-year-old Sylvette David, daughter of a Parisian art dealer, who was temporarily staying in Vallauris. She was the inspiration for a series of forty drawings, paintings and spatial studies.

In 1957, Picasso met the Norwegian sculptor Carl Nesjar (1920 - 2015). A seventeen-year collaboration is established with him, which results in the enlargement of various models of cardboard and metal plate in concrete, including some portraits of Sylvette. For years, Picasso's three-dimensional work was not nearly as well-known as his paintings, drawings and prints, until several major retrospective exhibitions of his sculptures changed that in 1960.