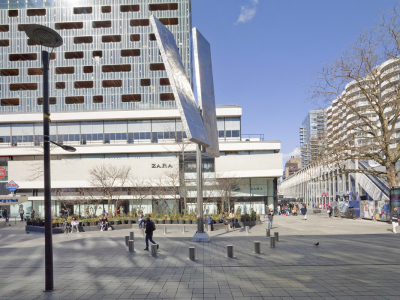 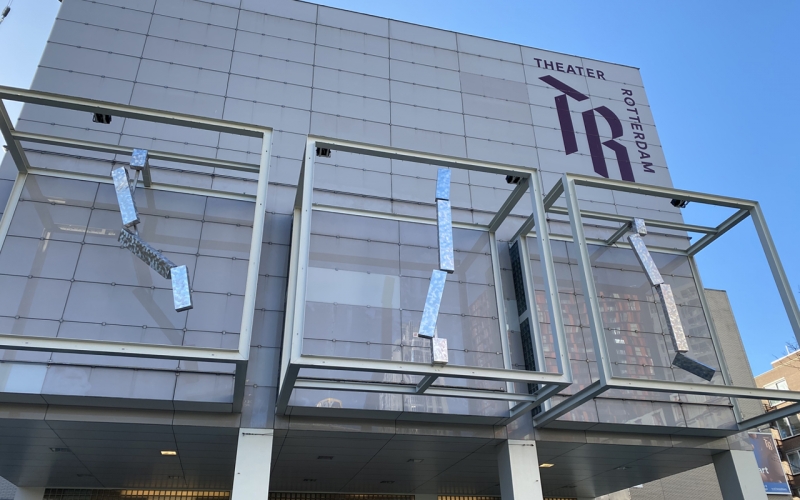 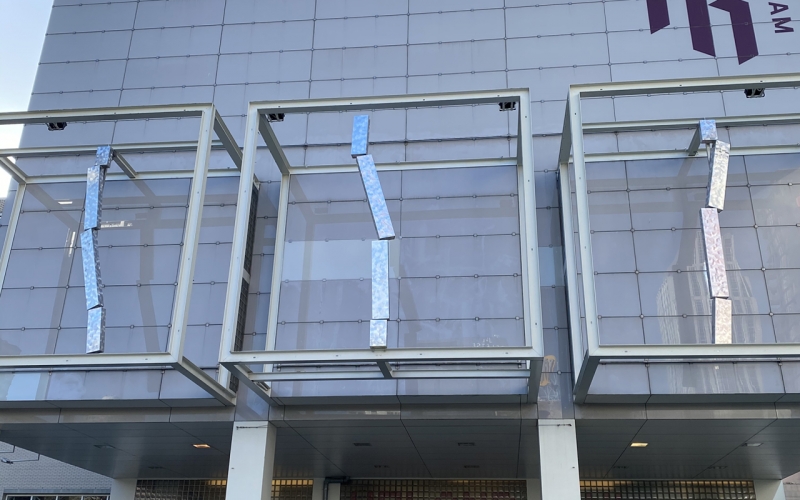 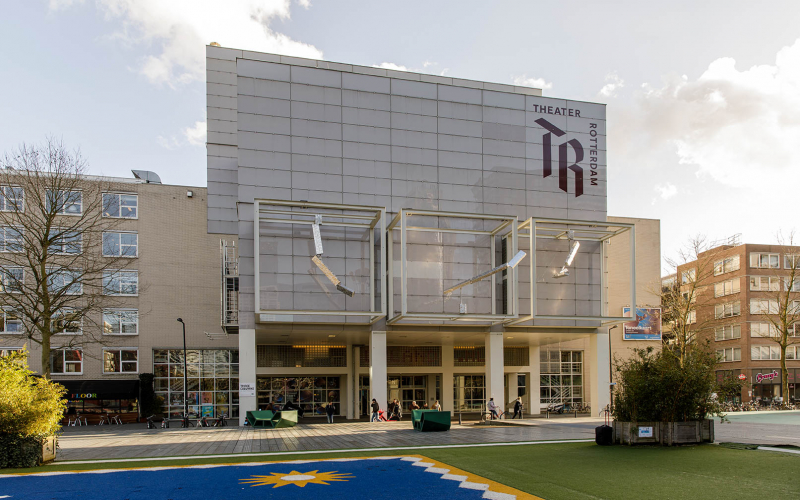 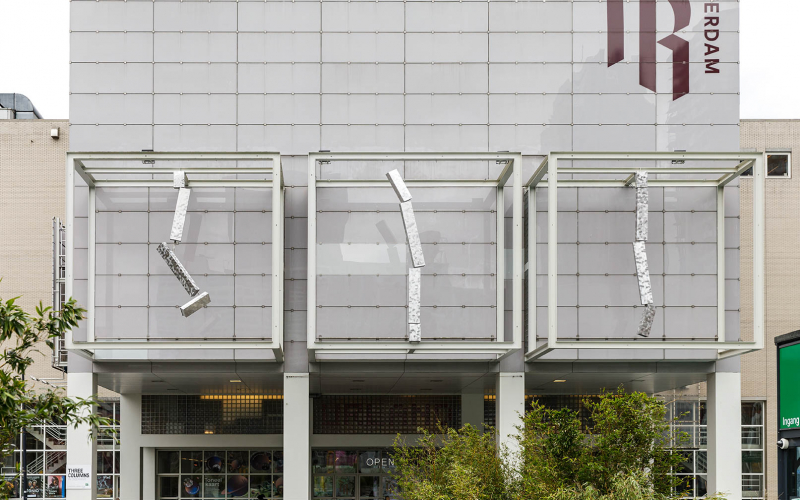 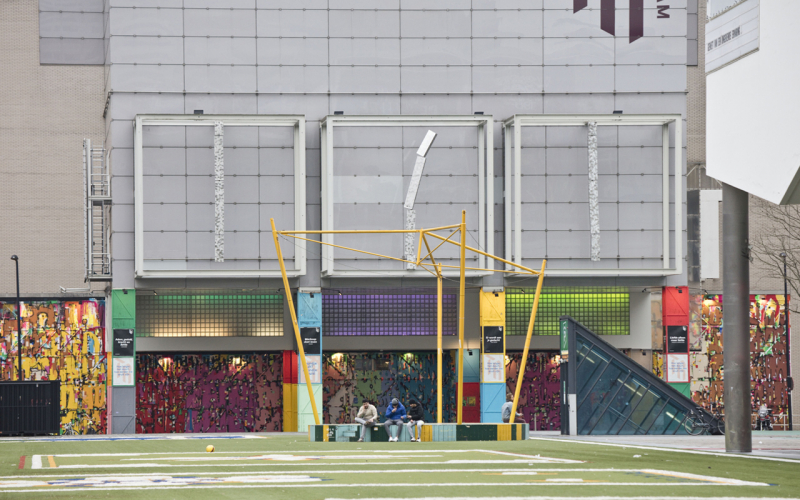 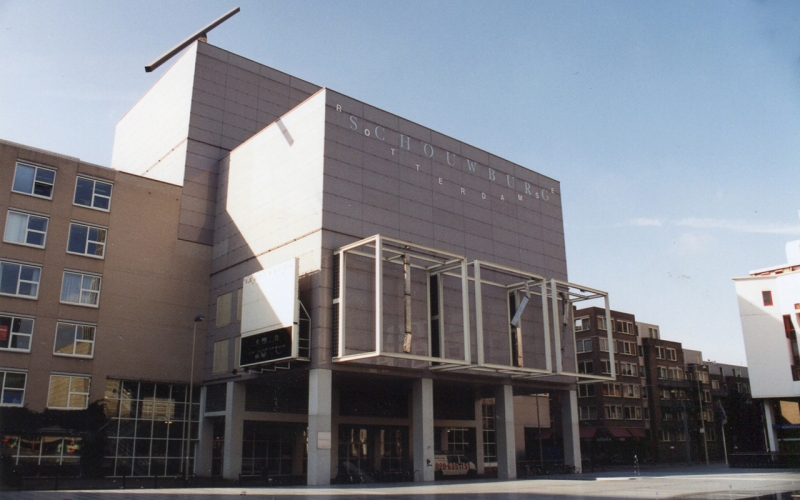 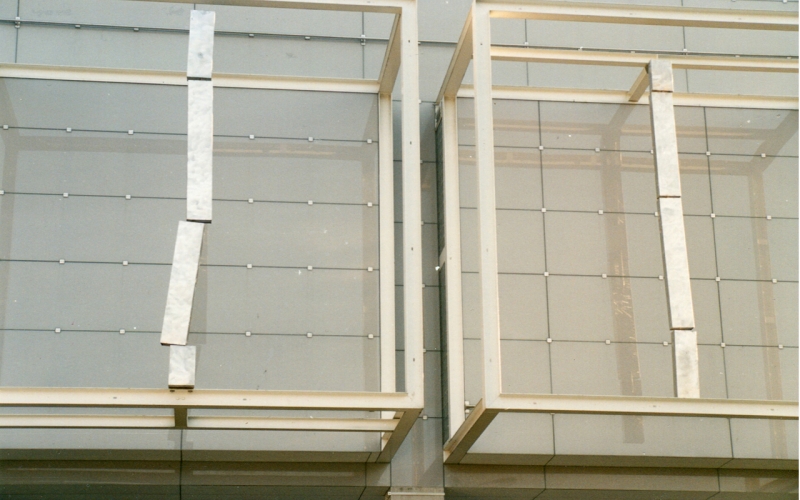 Artist George Rickey made his first mobile mobiles from metal wire and glass in the early 1940s. Influenced by Naum Gabo's moving sculptures, he made stainless steel constructions that swayed in the wind from the 1950s, which were constructed from rectangular surfaces and linear elements. The simple looking but very graceful Three Columns has become the pinnacle of this research. The movements of the three columns show a relationship with the movements of the human body, see there the link with the Rotterdamse Schouwburg, where the work was applied in 1989. Rickey regarded dance as the oldest kinetic tradition and said that his works can be considered as choreographies. This is George Rickey's second work in Rotterdam. In 1986 he was approached by his old friend, art connoisseur and collector Prof. mr. P. Sanders to exchange ideas about the interpretation of the three square steel frames above the entrance of the new building for the Rotterdamse Schouwburg designed by architect Wim Quist. It turned out to be a problem that took Rickey about three years to solve. On the creation he wrote: “The columns I have now made for Rotterdam are the result of earlier designs, executed in a rougher form and sometimes frustrating trials. As a finished product they seem simple, and they are, but they only became so after three years of experimenting, making discoveries and making improvements.” The Van Ommeren company (now Vopak) donated the artwork to the municipality of Rotterdam on the occasion of its 150th anniversary. In 1989, the Three Columns placed in the cubes. Fifty years earlier, Van Ommeren donated the Hofplein fountain to the municipality of Rotterdam. On May 19, 2015, one of the three moving sculptures was badly damaged in a storm and the fire brigade took several hours to safely remove a loose part. The entire artwork was therefore completely removed. The damage prompted a thorough restoration. After almost five years of absence, the Three Columns reinstalled on 11 and 12 March 2020 in the three steel cubes on the facade. The moving columns dance again. For more information: Sculpture International Rotterdam.

George Rickey (South Bend, Indiana USA, 1907 - Saint Paul, Minnesota USA, 2002) was an American sculptor known for his kinetic sculptures. He studied in England and Paris and traveled through Europe. Back in the United States in the XNUMXs, he began to shift his focus from painting to sculpting. He combined his love for technology with cubism and with mobile forms such as van Calder. The metal parts of his images moved with the slightest movement of the wind. He is considered an important representative of neo-constructivism.