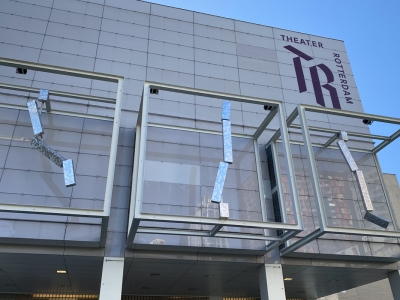 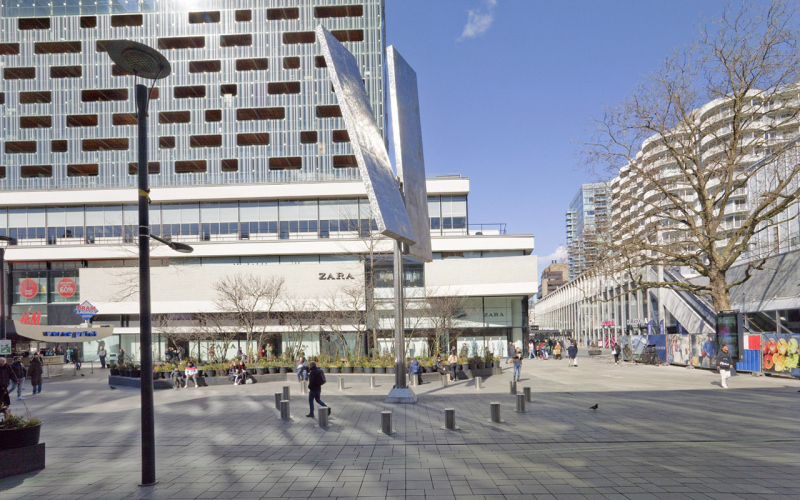 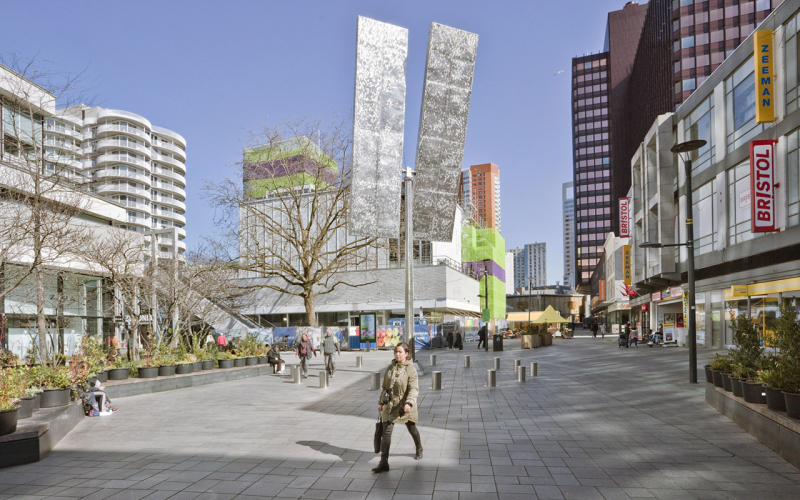 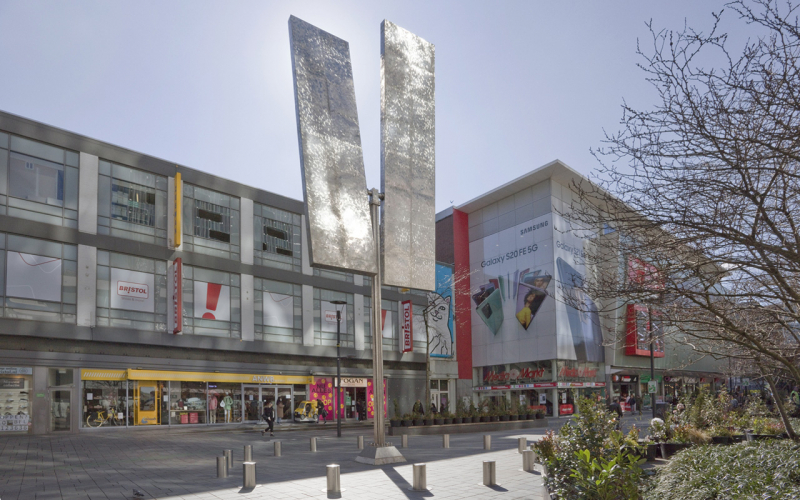 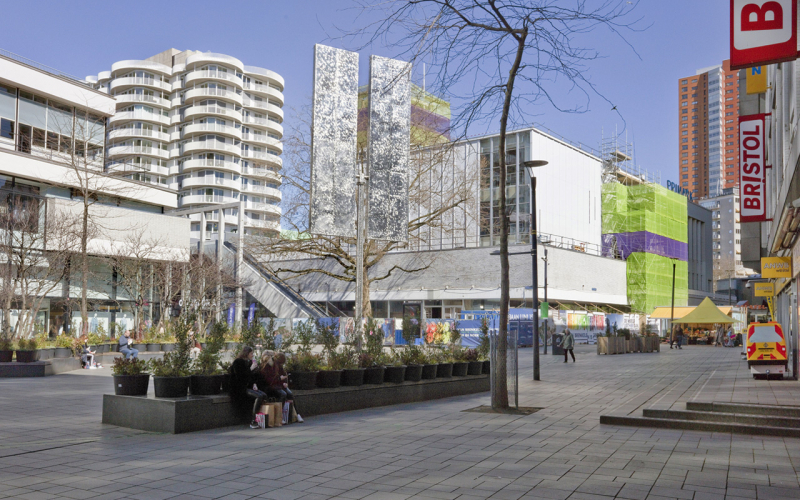 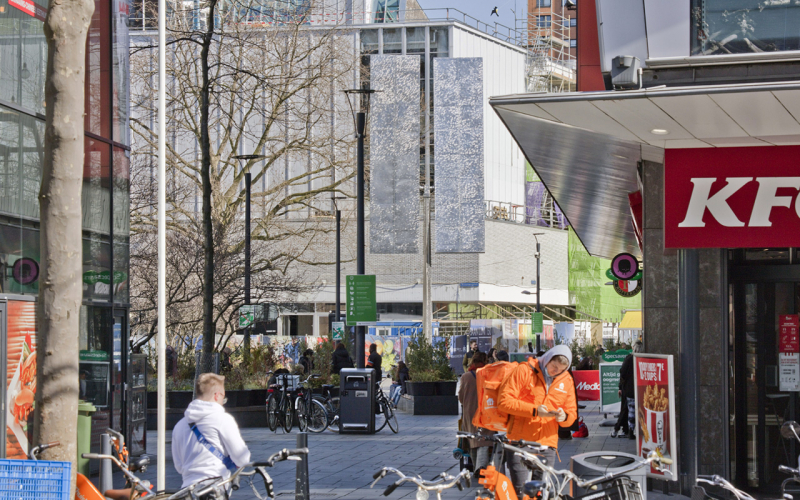 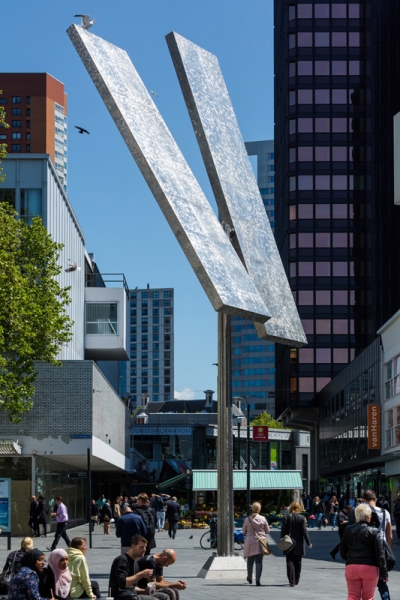 The American artist George Rickey created kinetic art: art with moving parts. No fewer than two of these moving sculptures can be found in the center of Rotterdam. The famous work Two Turning Vertical Rectangles on Binnenwegplein is one of them. Rickey became fascinated with constructivist sculpture, a movement in which construction plays the leading role. Rickey was also interested in art from De Stijl and the Bauhaus. In the XNUMXs these artists created stainless steel constructions, in which flat and linear parts were alternated. In the XNUMXs, Rickey constructed his images from shapes he repeated over and over. Two Turning Vertical Rectangles consists of two identical solid flat parts and is typical of his way of working in the late sixties. In 1964 Rickey was asked by the Urban Embellishment Committee to design an alternative to the fountain on Hofplein. This construction would be twenty meters high with eight identical moving flat elements, while a kinetic object crowned the whole. In the end it was not carried out, because the new foundation of the fountain would become too expensive. In 1969 he exhibited in Museum Boijmans Van Beuningen where a scale model of this design was on display. The design was rejected by the Municipal Executive, but the shopkeepers association Stichting Binnenwegplein decided in 1970 to offer the city a work of art on the occasion of the new Binnenwegplein and Rickey was invited to realize an image. Two Turning Vertical Rectangles was unveiled on May 7, 1971. The work has become a popular eye-catcher on the Binnenwegplein. In 2012, the artwork had to disappear temporarily due to the redesign of the square. Due to the raising of the new paving, the statue could not be replaced, because the rotating metal plates could possibly hit people. The windfall on the square had also changed due to new high-rise buildings, so that the kinetic work no longer functioned safely. After research, the solution was found in raising the pile and weighting the blades. From April 2015 the work could again be admired in the center of the city, but unfortunately for a short time. At the end of November, the wings were seriously damaged by unknown causes and had to be removed again. The blades were restored, but before they could be replaced, a protection had to be put in place so that they could not be damaged again. Poles have now been placed on the square so that no more trucks can hit it. Two Turning Vertical Rectangles can be admired again since September 8, 2020. For more information: Sculpture International Rotterdam en Platform Reconstruction Rotterdam.

George Rickey (South Bend, Indiana USA, 1907 - Saint Paul, Minnesota USA, 2002) was an American sculptor known for his kinetic sculptures. He studied in England and Paris and traveled through Europe. Back in the United States in the XNUMXs, he began to shift his focus from painting to sculpting. He combined his love for technology with cubism and with mobile forms such as van Calder. The metal parts of his images moved with the slightest movement of the wind. He is considered an important representative of neo-constructivism.