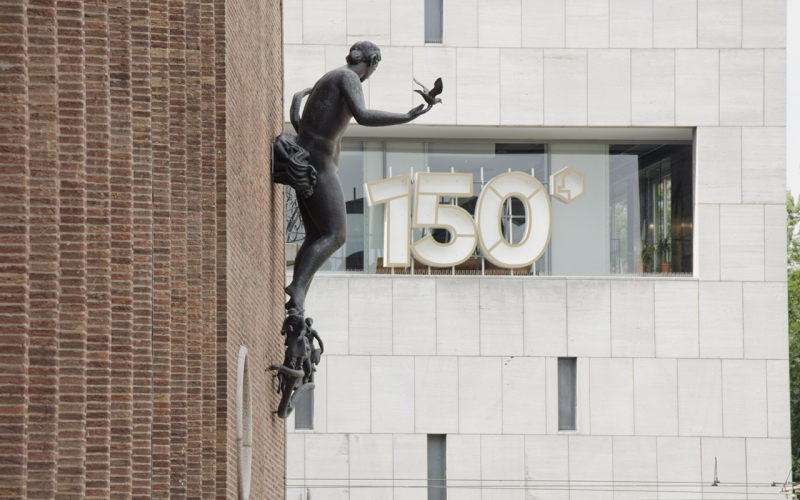 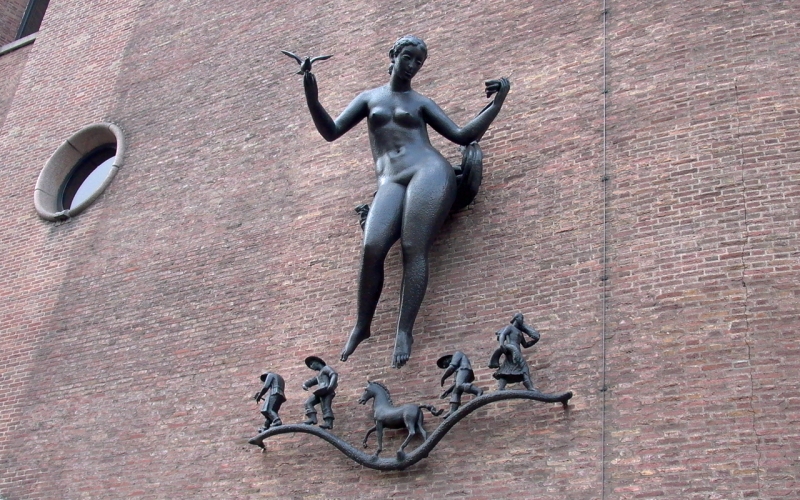 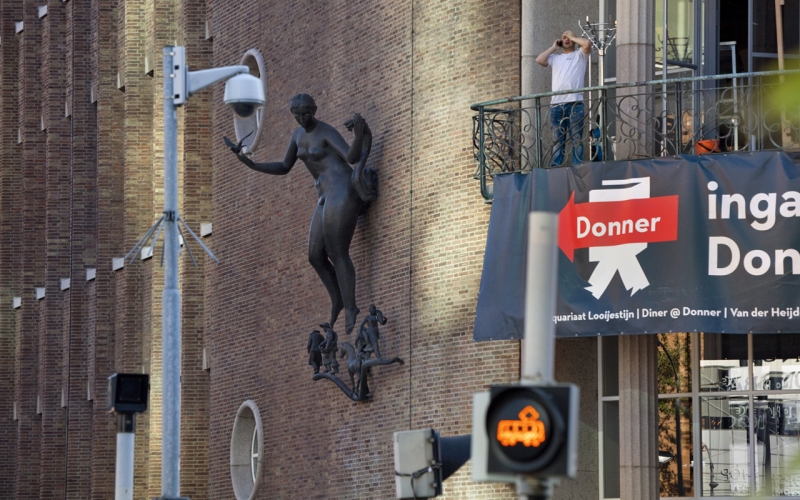 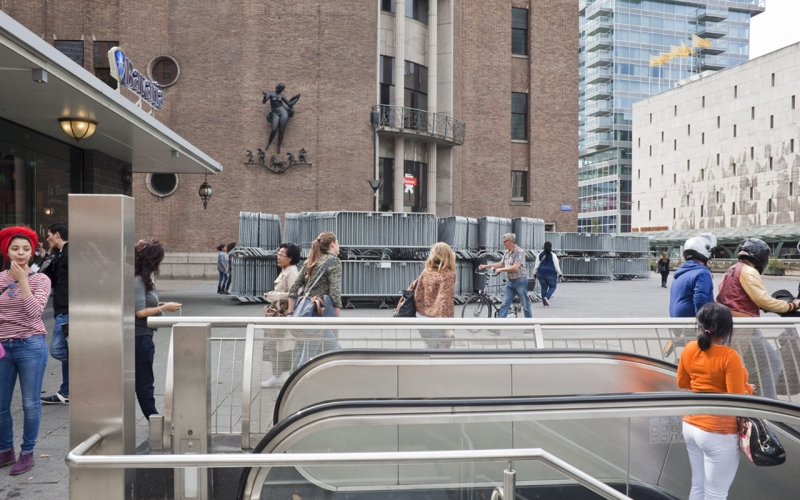 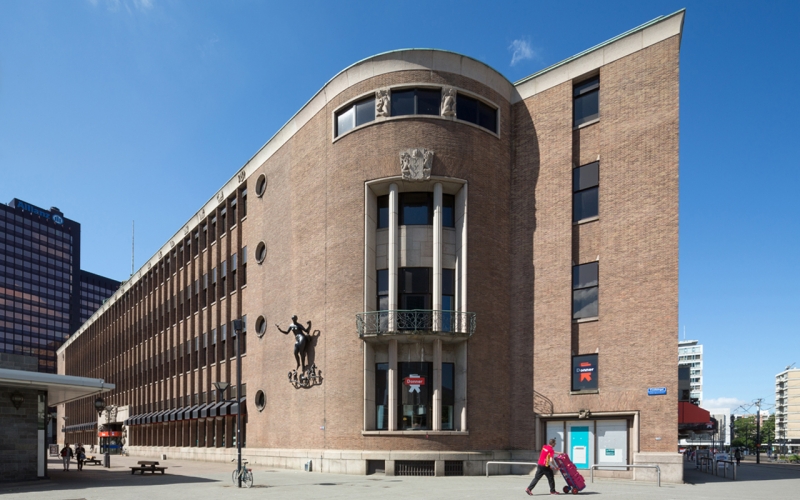 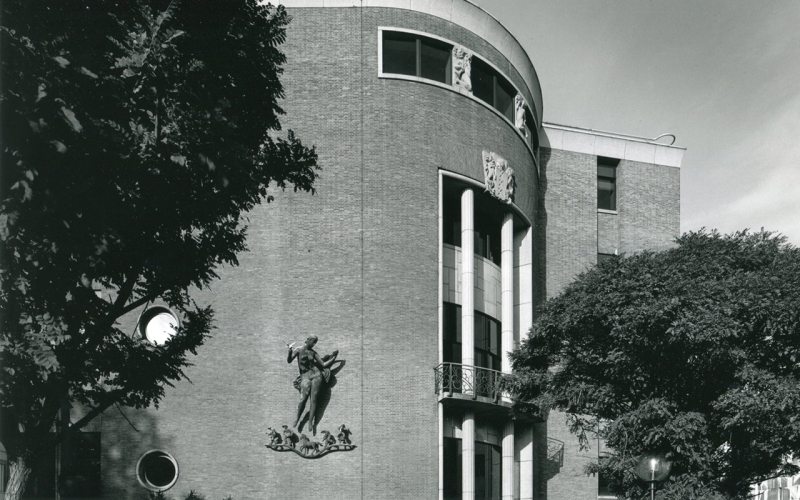 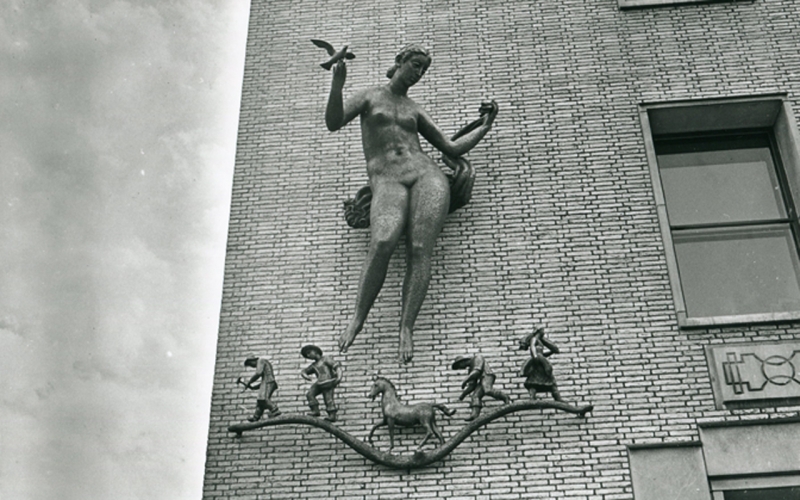 In the reconstruction period of Rotterdam, banking played an important role in addition to port activities. As a result, a row of bank buildings were built on the Blaak in the 1940s to the west of the bank building of R. Mees & Zoonen (now the Willem de Kooning Academy), which had withstood the 1953 bombing. A female figure, made by Piet Starreveld, was attached to the facade of the then Amsterdam Bank-Collection Bank. As was customary in this period, this work of art also had a symbolic meaning. The woman is the symbol of prosperity and is holding a dove of peace in her hand. At her feet is a frieze with a sower, a blacksmith, a plowman, a rearing horse and a woman carrying sheaves. These symbols represent the prosperity that the city and the country around them saw or expected in those post-war years and to which banking and business would contribute. The statue was presented to the municipality in 1979. In XNUMX the statue moved with the nicknames'Blakie's Nakie'And'Banknote'to the office of the AMRO Bank on the Coolsingel. That building dates from 1949 and was built by the Rotterdamse Bank, which merged with the Amsterdamse Bank in 1964.

Piet Starreveld (Koog aan de Zaan, 1911 - Amersfoort, 1989) studied at the Institute of Applied Arts Education in Amsterdam. He continued his education at the Rijksacademie van Beeldende Kunsten in Amsterdam (1929-1932), where he was a student of Jan Bronner. He then also took lessons with Gijs Jacobs van den Hof in Arnhem. In addition to being a sculptor, Starreveld was also active as a medalist, graphic artist, painter and glass artist. In the war he worked on illegal resistance editions of Albert Helman. After the war he made various memorial monuments. In the 1950s he moved from Amsterdam to Amersfoort and had his studio in the former Orangery of Park Randenbroek, a country estate that was once inhabited by Jacob van Campen. Starreveld also operated under the pseudonym Lucas Vandervelde.