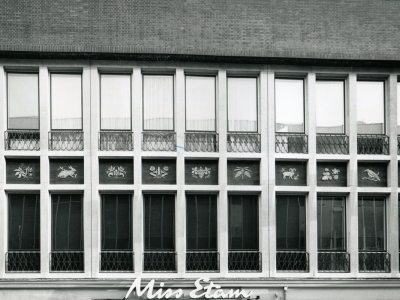 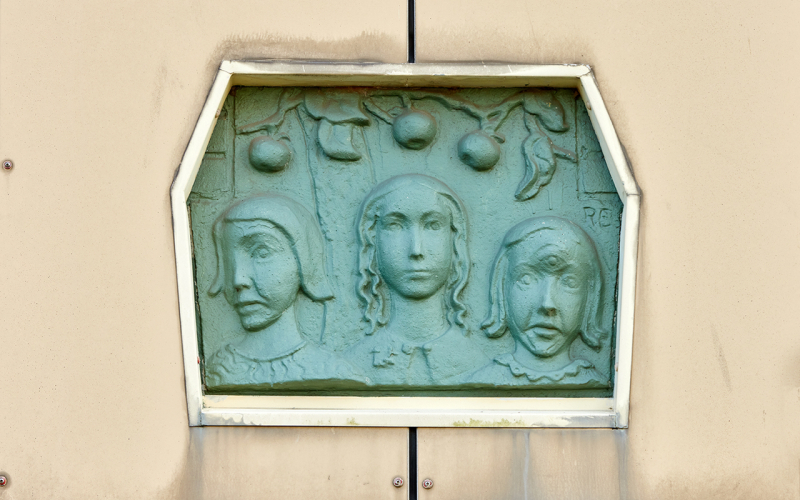 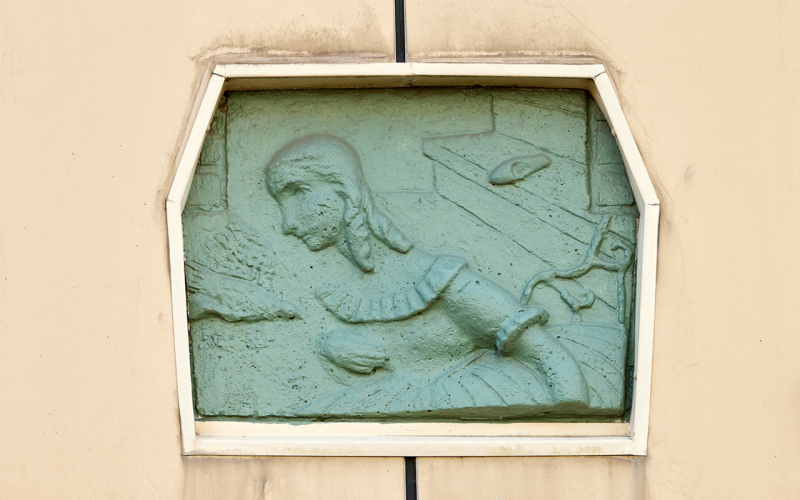 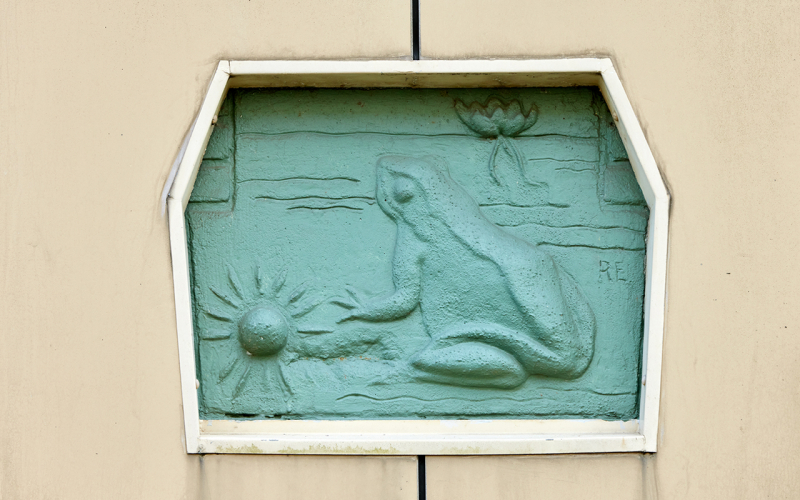 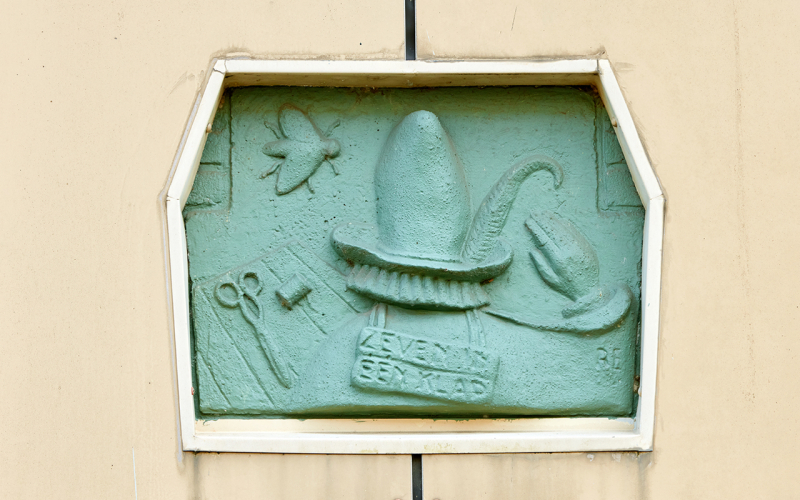 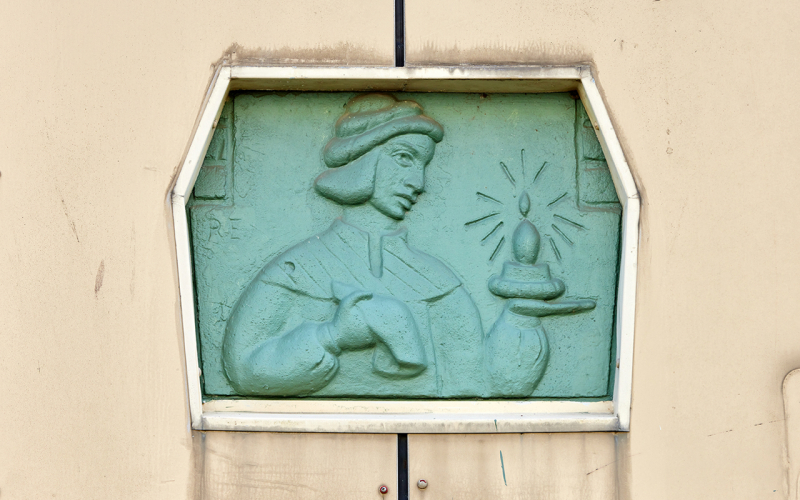 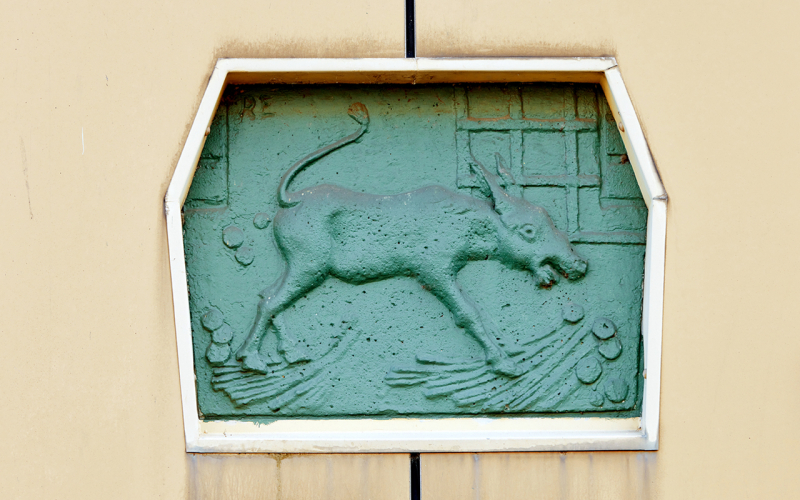 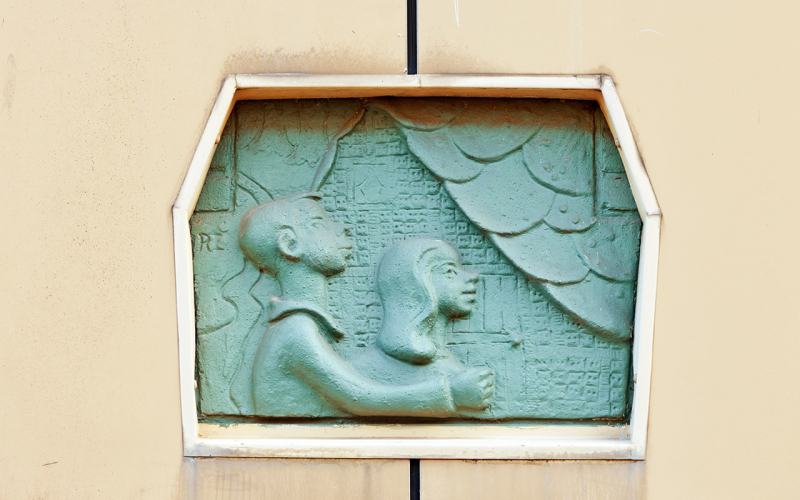 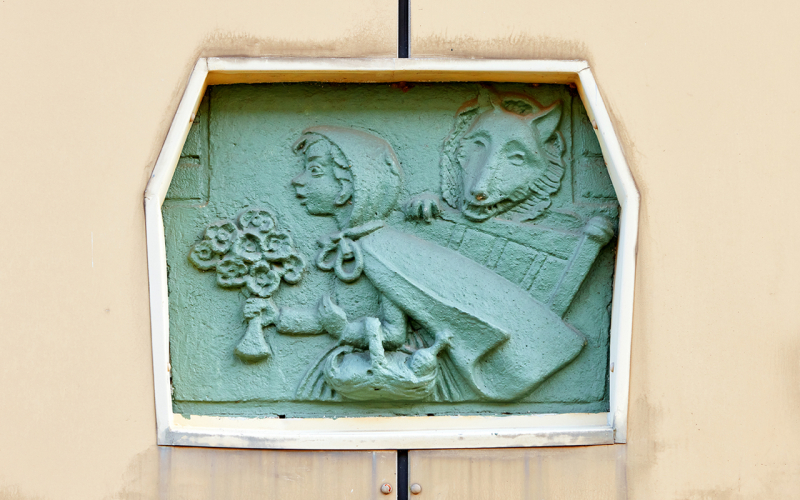 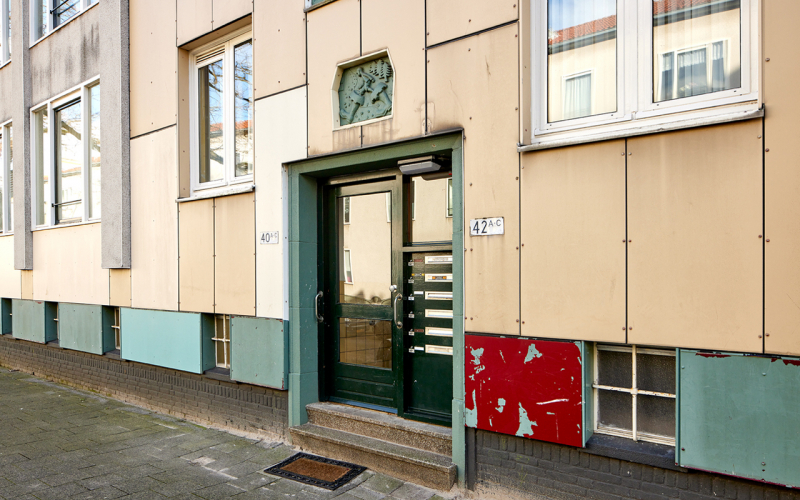 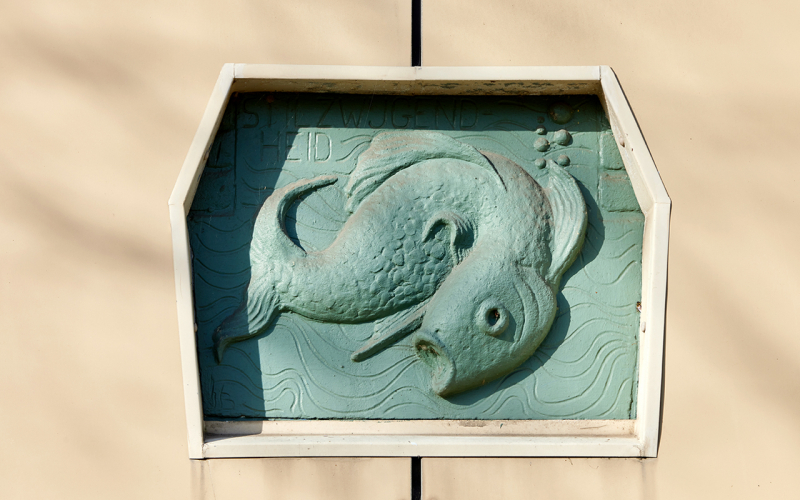 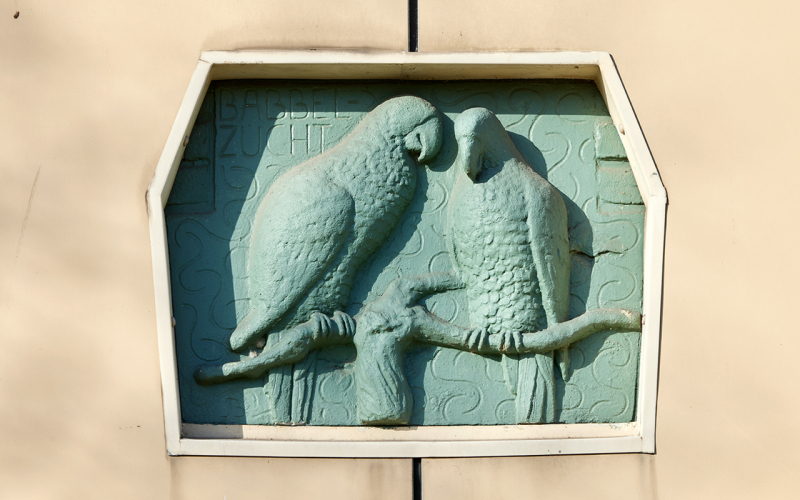 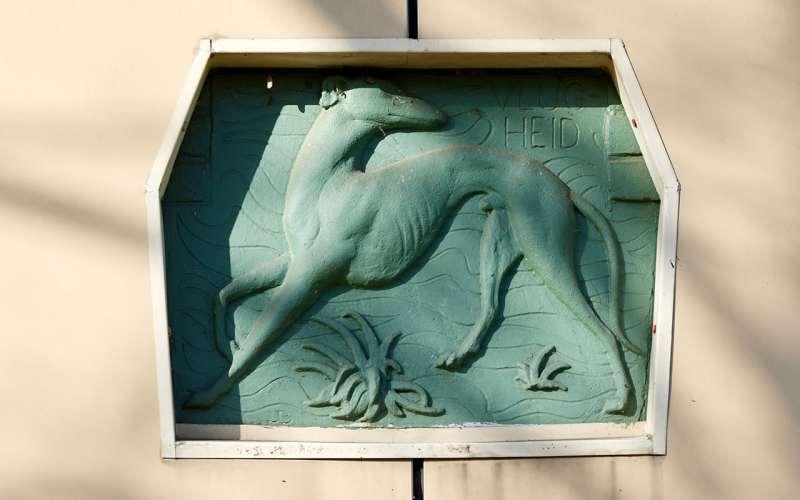 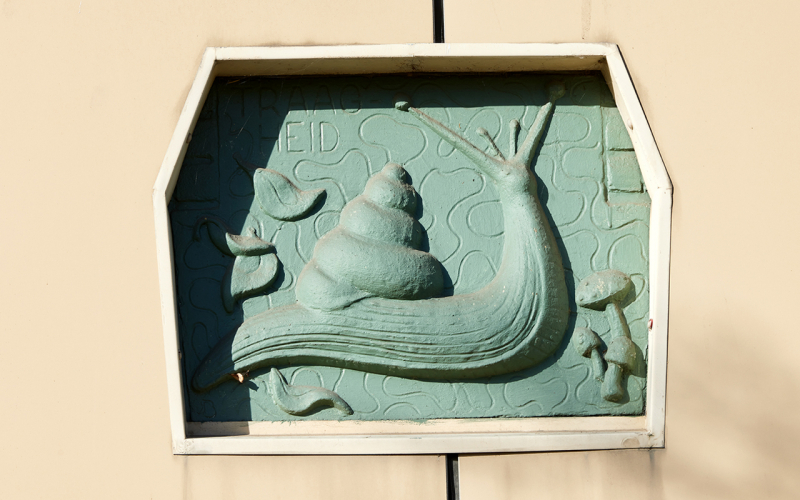 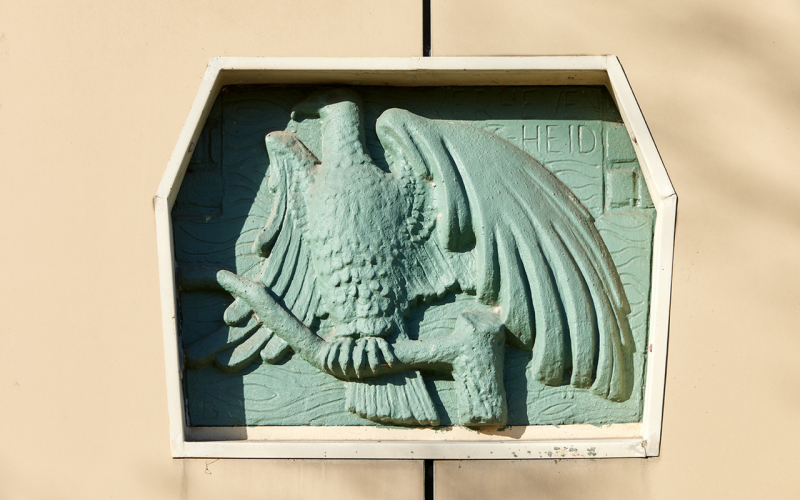 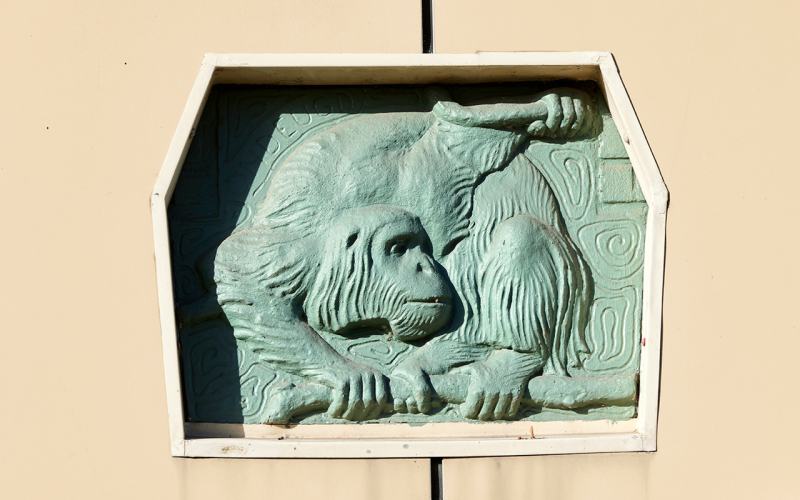 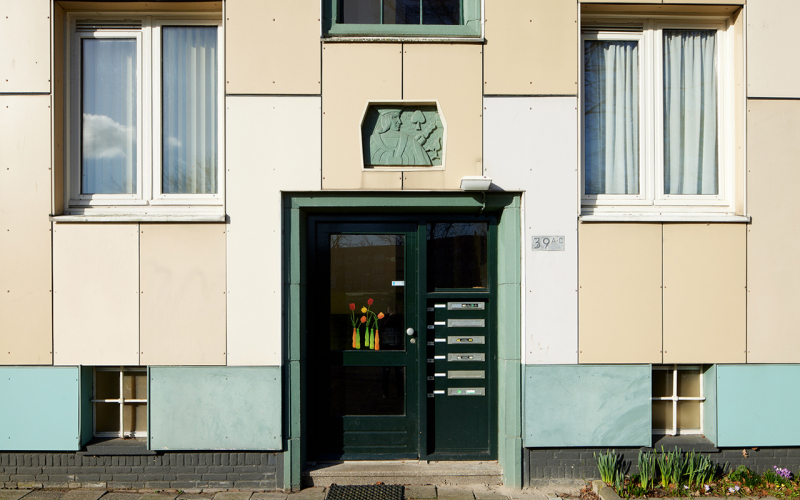 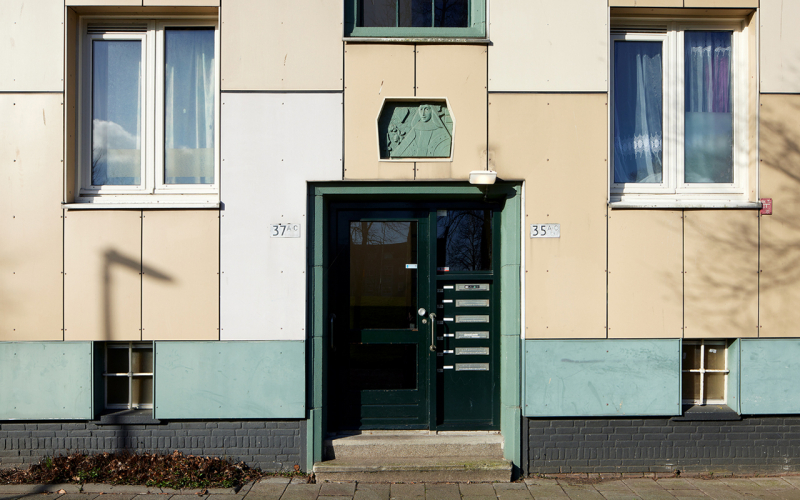 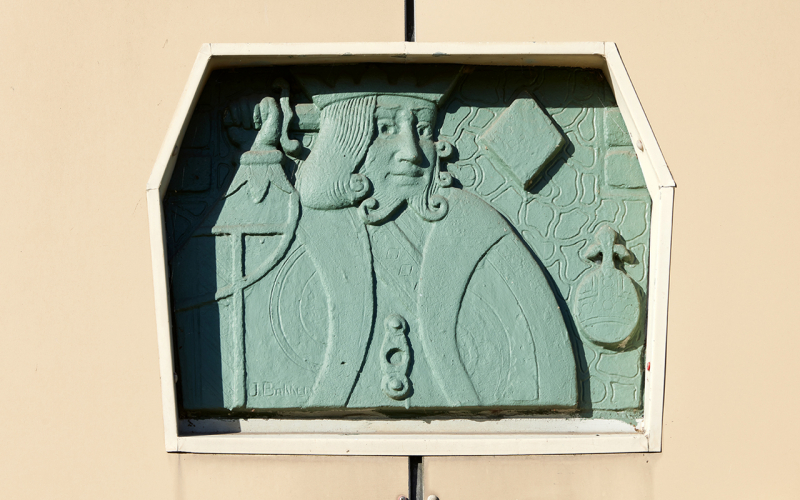 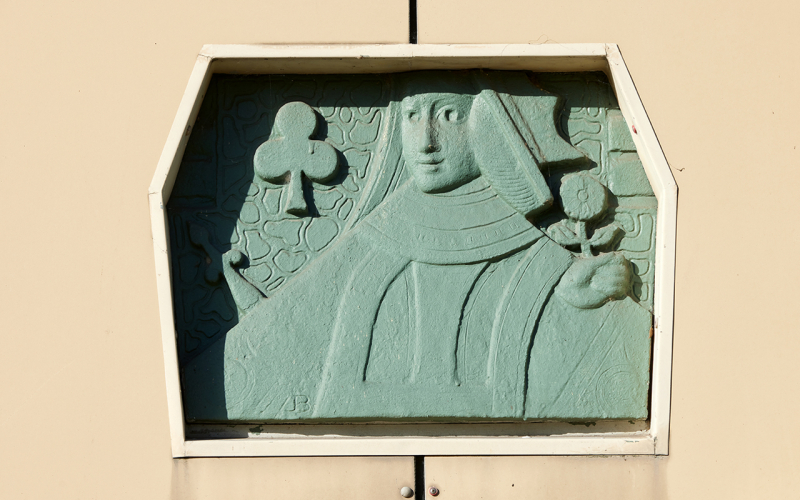 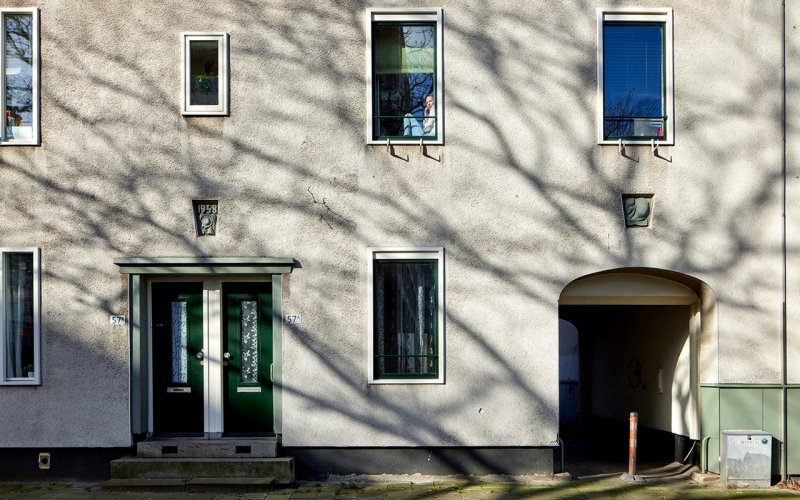 After the war, from 1946 to 1949, a housing complex consisting of apartment blocks was built on Speelmanstraat and Dijkstraat. The complex is designed by Vermeer en Van Herwaarden architectural firm and contains a total of 22 facade reliefs made by the married couple Riet Elias and Joan Bakker. There are two residential blocks on Dijkstraat, each containing 30 homes; each block has five porches. Above each portico is a facade relief, made by the Rotterdam sculptor Riet Elias. All stones are signed with RE. The theme of these ten facade reliefs is 'Fairytales'. The following performances can be seen in ascending order of number: One Eye, Two Eyes and Three Eyes (Dijkstraat no. 2-4), Cinderella, The frog king, The brave little cutter (Seven in one stone), Aladin and the magic lamp, Snow White, Donkey stretch, Hans and Grietje, Little Red Riding Hood and Little Thumb (Dijkstraat no. 40-42). The Speelmanstraat also consists of two residential blocks, but one block contains 24 homes (four porches) and the other 36 homes (6 porches). There are also ten gable stones above these entrances, but these were made by the Rotterdam sculptor Joan Bakker. The reliefs above the six porticos show animals representing 'virtues and vices'. Each stone contains the (in)virtue in word and is signed at the bottom left with JB. Ascending from Speelmanstraat numbers 1 to 21 are depicted: a fish for silence, parrots for chatter, a greyhound for swiftness, a snail for slowness, an eagle for magnificence and a monkey for vice. The other block with numbers 27 to 39 contains four porches and thus four facade reliefs. These stones were also made by Joan Bakker and refer to the four suits of a card game. Decreasing in number they show the Queen of Clubs, King of Diamonds, Queen of Hearts and Jack of Spades. The facades, originally built of brick, were covered with light yellow and gray Trespa panels during a renovation in 1984. The reliefs have been saved. At number 57 Dijkstraat, two small reliefs can be found, which are not signed. This shows the year of manufacture 1948 and a swan.

Riet Elias (Rotterdam, 1919 – Boxmeer, 2010), also known as Maria Bakker-Elias, was educated at the Academy of Visual Arts in Rotterdam. She was a sculptor, maker of mosaics and ceramicist. After living and working in Rotterdam for a while, she moved to Boxmeer in Brabant in 1960. She was married to visual artist Joan Bakker, of which several sculptures are present in Rotterdam.