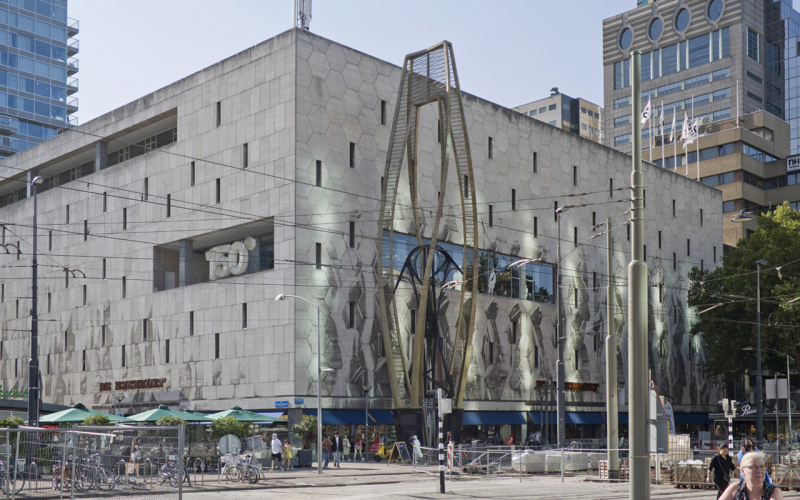 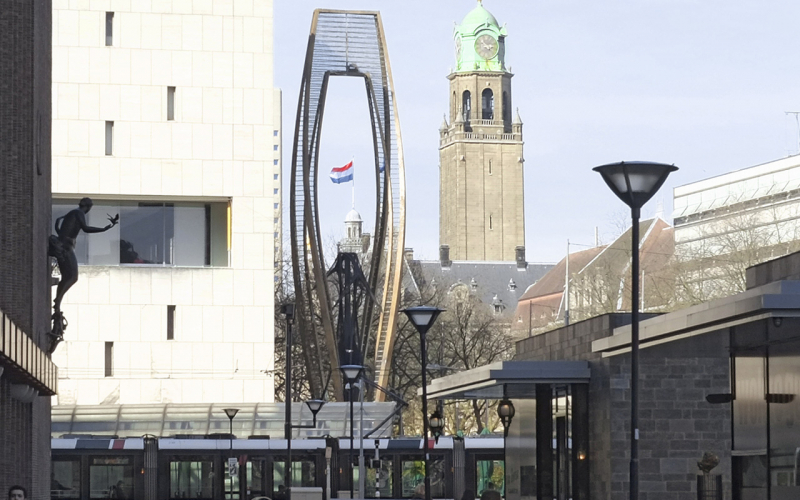 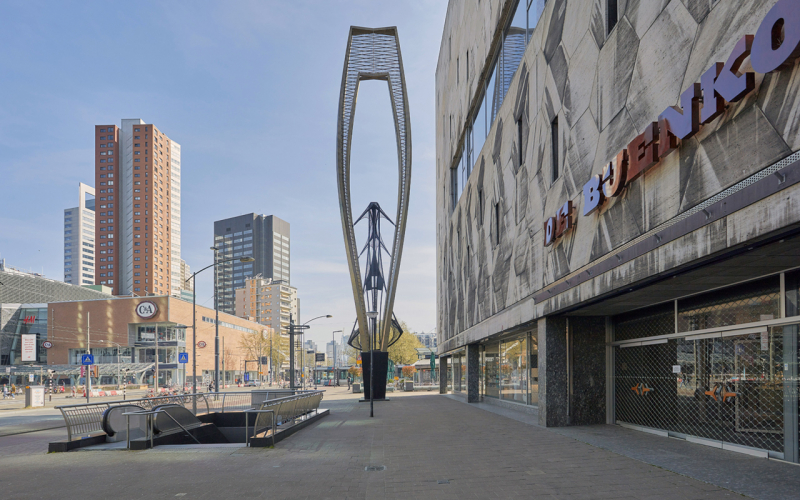 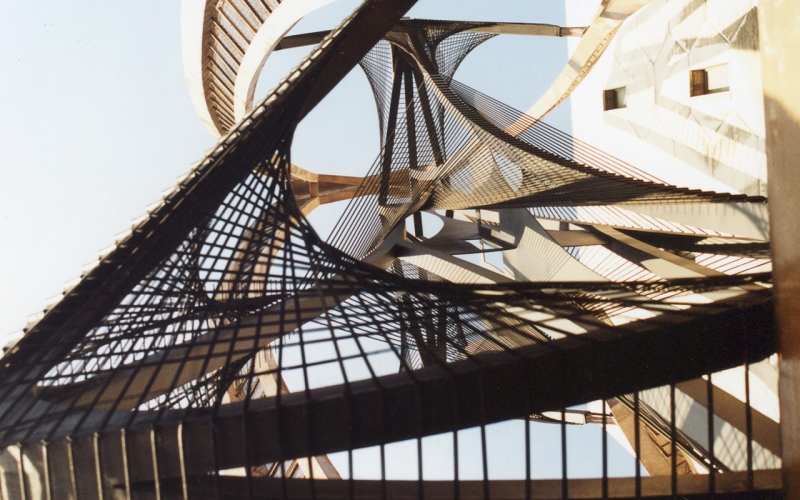 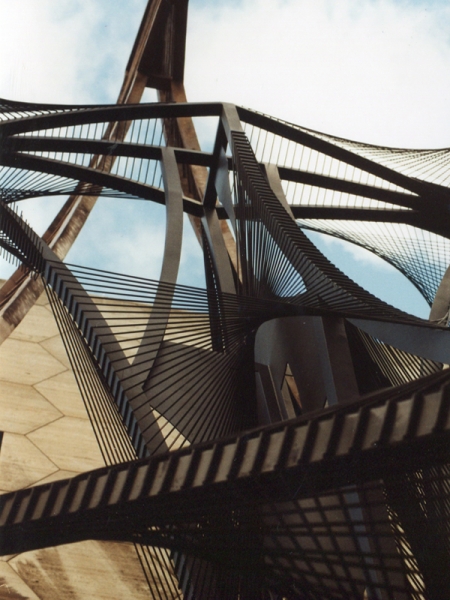 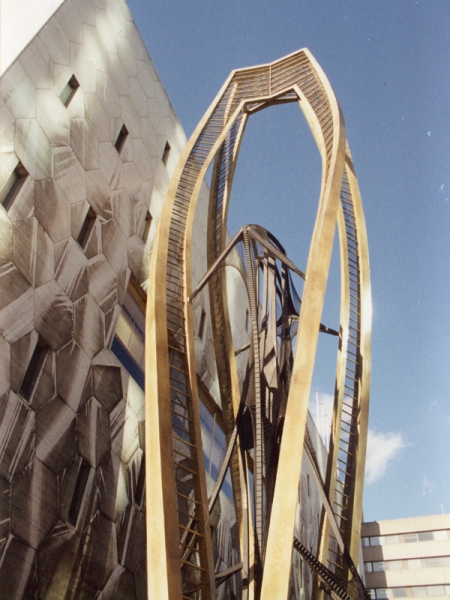 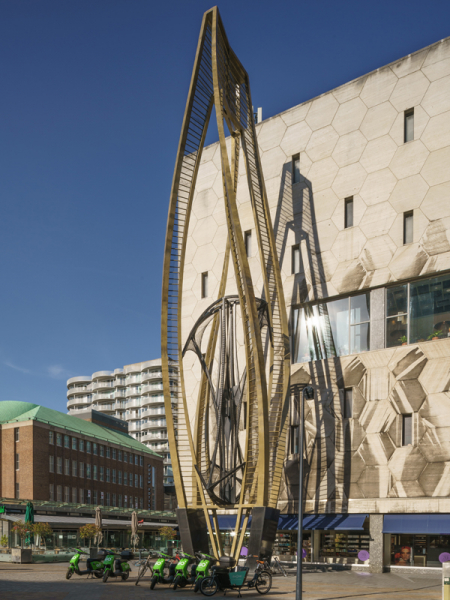 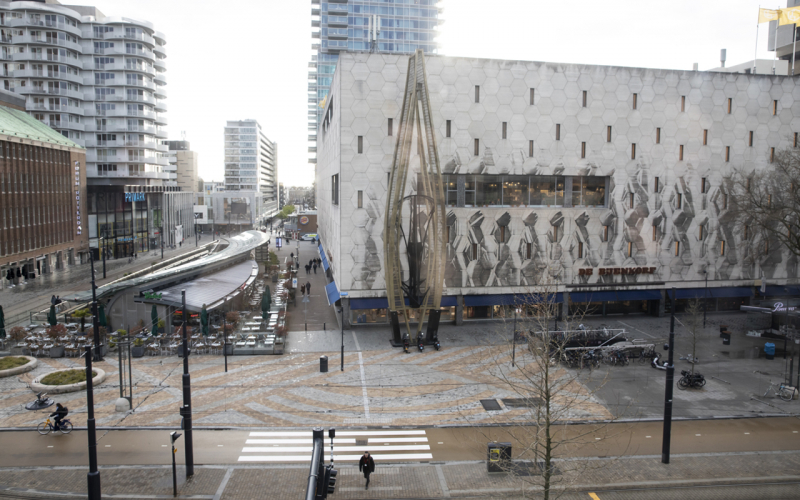 The history of the sculpture by the Russian-born American sculptor Naum Gabo is inextricably linked to the construction of the Bijenkorf. During the construction of this department store by architect Marcel Breuer in the 1940s, to replace the old Bijenkorf, which was badly damaged in the German bombardment of 90, a difference of opinion arose between the management of the Bijenkorf and the urban planners of the municipality. The municipality wanted the company to adhere to the prescribed building line. De Bijenkorf wanted more space for the facade on the Coolsingel. Finally, the Bijenkorf won the prize by offering the municipality - to the satisfaction of all involved - the statue of Naum Gabo. Gabo made a design, which he says was inspired by the organic structure of the plant world. He understood the image as a tree with a trunk, roots and branches. The design - an elegant tower consisting of four double ribs, which rotate 21 degrees across the image height and merge at the top - is made of steel and a zinc and brass coating on a concrete plinth, which is covered with black marble. On May 1957, 26 (Construction Day), the statue was unveiled by the mayor of Walsum. Gabo proclaimed that the image expressed the spirit and energy of the Dutch. The statue is seen as the pinnacle of constructivist sculptures. Gabo had modeled the intricate construction without any calculations; engineers from the TNO in Delft had to be involved to test the 40-meter high and 50-tonne model for safety in a wind tunnel. The sculpture itself - called by Gabo “an ideological contribution to constructivism” - was created in the Hollandia construction workshops and machine factory in Krimpen aan den IJssel. The statue of Gabo is now part of the city, but in the 2017s it was an act of courage by the management of the Bijenkorf - who had already enriched the city with a statue of Zadkine - to create an abstract sculpture of this size. to give it a prominent place in the new Rotterdam. The director of urban development ir. C. van Traa, the most important designer of post-war Rotterdam, also had difficulty with this abstract sculpture at first, but later generously admitted that “a great urban development asset had been achieved with Gabo's sculpture”. Gabo's sculpture was thoroughly restored by MeestersIn in 2018 and completed in XNUMX. For more information: Sculpture International Rotterdam.

Naum Gabo (Bryansk (Russia), 1890 - Waterbury (Connecticut), 1977) was a Russian-American constructivist sculptor. Space played an important role in his work. He tried to add volume to his images by working with different layers. Besides sculptures, Gabo also made kinetic objects, such as mobiles. Gabo, whose original name was Pevsner, visited Paris in 1910 and came into contact with avant-garde artists, including Wassily Kandinsky. In 1915 (during the First World War) Gabo made his first constructivist work. During the years 1922 - 1932 he stayed in Berlin, where he taught at the Bauhaus in 1928. He then moved to England and finally moved to America in 1946. He became a citizen and lived there until his death in 1977.
Gabo is one of the founders of modern sculpture. Instead of wood, stone and bronze, he used new industrial materials such as plexiglass and plastic. Mass and volume - the pillars of traditional sculpture - have given way to transparency and an apparent weightlessness in his abstract, spatial constructions. But what makes Gabo above all 'modern' is that he chose not nature but concepts from the exact sciences as a source of inspiration for his art.