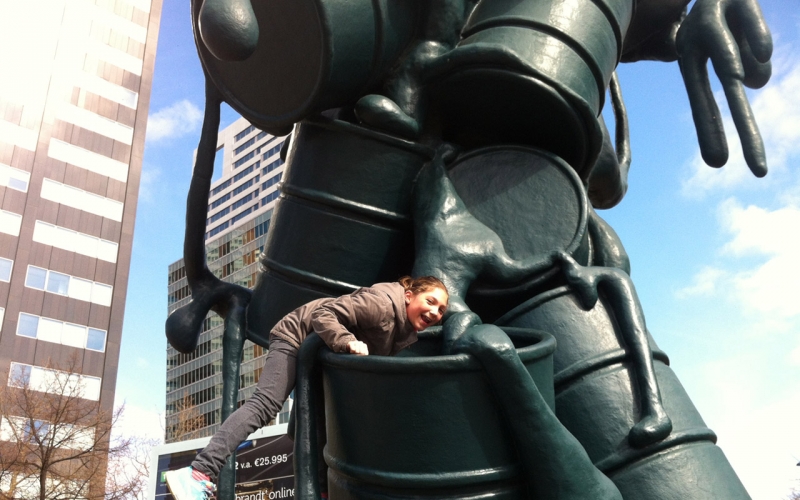 And there is the statue of Atelier Van Lieshout: a dark green tower of oil barrels, photographed in the twilight, surrounded by the economic heart of the city. This moody photo was the opening slide of a symposium in the autumn of 2011 Economic Development Board Rotterdam. That was about the usefulness of beauty in the city. A club of men sat at the tableeltjes to brainstorm ways to bring international business to the port city. A cultural image helps the business climate, decided the attendees, who advised them to explore the raw beauty of the city. The slide gleamed against this backdrop Cascade, a work of art that capitalism of that business both criticizes and confirms.

Two years earlier, SIR had asked Van Lieshout to develop a proposal for the heart of the city. That was almost a natural choice. Rotterdam has an international sculpture collection, but there was no image of the most famous Rotterdam sculptor of our time. In addition, SIR gave the artist carte blanche to find a location for itself in the center. Van Lieshout chose Churchillplein: the only sculptureless square on the Coolsingel that should become a city boulevard with allure sometime in the coming years. At the moment it is mainly a strange place: a traffic artery where roads intersect, where there seems to be no beginning and end, and tall buildings take away the view of the nearby Maas. A monumental statue like Cascade takes an advance on the expected and planned grandeur. For now, it had to be especially big to be able to participate in that environment: shiny office towers that radiate the wealth of business, the skyline of the dream metropolis. Van Lieshout was entrusted with that competition.

The official reading of the statue of Van Lieshout by the artist himself is about that business world: a shaky stack of oil barrels as an unstable representation of a collapsing economy. It is a work of art in the classical modern sense that it wants to hold up a mirror to us: ecce homo, the world is shaking. Loyoyant figures hang from the oil barrels, who want to climb this symbolic ladder, some falling, others pushed down by brighter career hunters. Whoever wants may perhaps read more in it. That none of those males understands that they consist of oil, as - quasi-Marxist - a commodity in the economic production of large capital. Van Lieshout is not the soft one. In his dystopian Slave City, employees are ground to food in the event of malfunction.

But above all, it is a Rotterdam image with its oil barrels, which you can see being introduced into the port. Van Lieshout has his studio there. If you take a boat trip with the Spido, you will also pass a strange place between all the containers where large polyester skulls and human figures can be found. In this so-called AVL-Ville, Van Lieshout lobbyed for a free state in the 1990s. That was canceled: Atelier Van Lieshout also had to comply with Dutch legislation. Yet his rebellion was fruitful. It contributed to the creation of a myth - wild parties, pigs on the spit, dubious working conditions, weapons - that continued to bear fruit. The noise transcended national borders. Van Lieshout was asked for important international art events. From anti-authoritarian he himself became an authority with the provisional top developing a backdrop for the Wagner opera in Bayreuth.

And that is true Cascade is about: about the selfmade cultural entrepreneur Joep van Lieshout. Anyone who sees this sculpture recognizes the oil industry, but he first recognizes Van Lieshout. This is due to its recognizable visual language. With his company, he has developed a style of anonymous human figures that he has executed in the same polyester as his caravans and furniture. His stylized human figures are so typical of Van Lieshout that every image, in a sense, serves as a logo for his company. They have the stylization that since the modern art became defining in the visual world - even though it gives drips Cascade yet again a very different silhouette. But this sculpture, like its other images, is also exceptionally photogenic due to its simplicity, something that he has in common with other international art stars who manipulate the art market mechanisms - Koons, Hirst, Prince.

Despite his international fame, Van Lieshout has closely linked his life course and image to the port city. At the end of the last century he already seemed to symbolize that tough city, which dangled at the bottom of the right lists and was at the top of the wrong lists. When furniture manufacturer Lensvelt asks him to design a series of office furniture, they decide to expand his rugged image. The cover of the catalog, filled with desks and chairs, shows the artist as a freedom fighter, chest half naked, on a wagon with anti-aircraft guns from his free-state years - purchased by Museum Boijmans Van Beuningen. This float annex museum piece is one unique selling point that no furniture manufacturer is copying them.

The metamorphosis of a rebellious artist into a career maker is doing well in public opinion. Hal Foster analyzes in Design and Crime how Frank Gehry, from his rebellious background, could turn it into a designer of logo architecture, precisely because he was considered an anarchist. Brutal images with a brutal past count as double daring. The same applies to Van Lieshout. He also makes logo images larger than life and instantly readable - as striking as Gehry's iconic buildings. With that simplicity he competes with the corporate branding of the surrounding business.

Such a coming of age story is a sign of personal development, certainly with the obstinacy of the arts, a victory in these difficult times of individualism. In that sense Cascade a self-portrait with his struggling males. Van Lieshout's success fits in with a desire for development to rise above the masses, above the anonymous figures who are Cascade climb up. It is the worker ants that make up this world but that nobody wants to identify with. The global economy is so radical that people are losing control of their world and work. They feel like playing balls, in a Marxist way: cogs in society. You can see that in the males Cascade. They are faceless figures who try to survive in a threatening economy. Van Lieshout wins that battle.

It is that bravado and iconic power that the men of the Economic Development Board Rotterdam advocate. The slide of the Cascade couldn't have been better chosen. In its stylization, this directly readable sculpture fits in with the business world to which it relates and what it magnifies. The smooth finish and the commercial signature of Atelier Van Lieshout symbolize a very different kind of art than that of the lonely attic artist. Van Lieshout is a big business himself. It wants to expose über capitalism through the same capitalism: a large work of art is an exclusive good, part of the art market. This victory column not only reminds the business world. It is also a monument for Joep van Lieshout, at an A-location, an eight-meter high triumph on a pedestal.