by Siebe Thissen Lecture given during the launch of the book 'Interactive Landscapes' in V2, Rotterdam, 27.10.2010 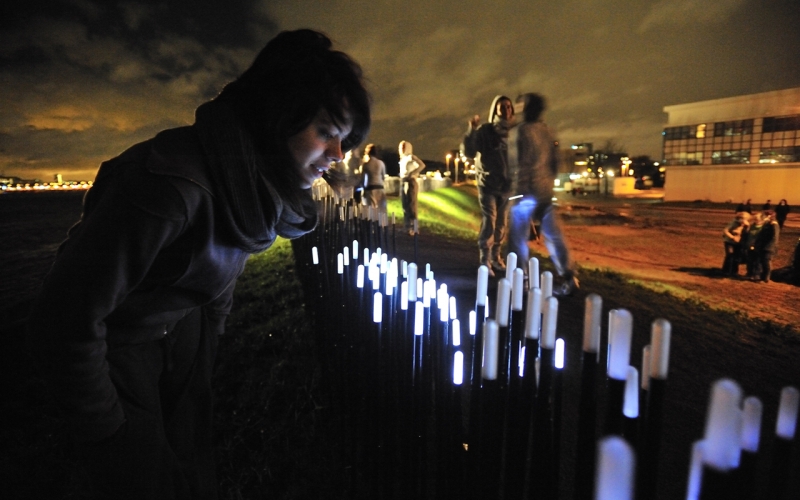 It's a pleasure to share a few words with you on the occasion or a book launch - Interactive Landscapes, the first extensive Daan Roosegaarde catalog, containing a wild collection of ideas and concepts about interactive and self-sustaining environments, relational architectures, non-decorative design, smart fashion, techno-aesthetics, futurist humanism and re-inventions or public space. The book is also a proud manifesto, proclaiming the rise of a small factory, just beyond the outskirts of Rotterdam: Studio Roosegaarde, and portraying its entrepreneurial founder. Never harassed by techno-fear or even theory - is there any theory in his works? - Roosegaarde seems to work intuitively and from a totally optimistic view of the world: 'I want to update the world', he cried out lyrically in an interview with De Volkskrant (8 October 2010).

Thinking and traveling with the speed of light, interweaving his personal life and creative business within the matrix of the global village, he defines the contemporary and has become a welcome guest in museums and symposia. His installations are never finished, always in flux and progress, listening to emotionless production line titles, like Dune 4.2, Lotus 7.0 or Flow 1.1. Roosegaarde's exhibited artworks are temporary extensions and manifestations or designing processes. The museum is his experimental test area. Even his finished products, created in the context of a commission, can hardly be called final products at all. However, they are just carefully archived internships in an ongoing creative process.

An example is Dune, a fine work of public art, created last year in commission for the community or De Esch in Rotterdam. Dune consists of a hundred meters or artificial sand already, weaving gently along a dangling footpath on top of the embankment or river Maas. Each drove culminates in a small LED light, lightening up frisky when it is confronted with physical motions, with human interaction. As if it expresses the love of encounter - like a doormat saying 'Welcome'. The result is a light-hearted interplay between human beings and technology. Dune is hilarious: first there is the element of surprise ("Wow!"); next the process of experiment and play ('hahaha!'); and finally the creation of an individual and collective composition ("Hey, look what we are able to do!").

Dune creates public domain - it's not so much a work of art in the public space; it is art as public space: Dune creates public domain and re-invents public space. It affects us, it changes our behavior, it makes us do lovely things, by ourselves and collectively - things we didn't just consider before Dune was there. And that's Roosegaarde's object: "I love these coincidental encounters with my works," he asserts, "I want to show people that you are the person who controls technology."

I got involved in the financing and production of Dune, after Marjolijn van der Meijden discovered Daan Roosegaarde in 2006. She argued passionately for his approach to art and consistently convinced the Center for the Arts to include him in a commission for De Esch. I was skeptical at first, since interactive public art has a bad record when it comes to maintenance and necessary precautions against vandalism, theft and electronic defaults. It is far more easy to maintain a bronze sculpture, than to manage a vulnerable, complex, high-tech and computer-driven installation, situated in the middle of nowhere, without any real surveillance and left on its own at night.

But then I with Daan: he is not the type of artist who just produces an object, sends you an invoice and consequently presumes that society will take care of its future and maintenance. No, this entrepreneur not only offered himself as a watch guard for the three years term we agreed on for Dune to exist, he also guaranteed maintenance by bringing in his studio and the production company as partners within the project. So Dune became a public-private enterprise. Possibly, this type of joint venture might offer a blueprint for future digital art works in public spaces, decisively diminishing the risks mentioned above.

But Daan also had face competition with other artists. Approximately 80 percent of all public art works in Rotterdam are the result of civil initiatives. In this respect, there is no other Dutch city that values ​​public art so highly. In fact, it might be our only authentic, indigenous and communal art form, rooted in the bombing of the city in 1940, and providing consolation for the loss of people, city life, culture and identity. Within a period of fifty years, Rotterdam has built up a collection or more than one thousand monuments and art works. At De Esch, a neighborhood committee expressed as a mutual concern for their public environment. In order to get their neighbors involved and to provide more quality in their neighborhood, the group initiated a public art project. To cut a long story short: they finally decided Zane was the right man for the job. Okay, he's creative and has a nose for business, however, he's charming and a smooth talker as well. Put the guy in front of a bunch of heavy tobacco smoking neighborhood dwellers, and he'll take them anywhere he wants to. And so Dune was born.

That is, the concept: Dune 1.0. It took our project manager Marjolijn and Studio Roosegaarde three years to fully realize the idea: Dune 4.2. I will not bother you with details of logistic problems, software development, test facilities, political inertia, urban policies, permits and sponsorship troubles. Patience is as much a virtue as it is an inescapable necessity for all public art. In the meantime Daan traveled the world, showing immature pre-stages or Dune everywhere.

A good work of public art is defined by its potential to enhance public domain or to make public domain or social interaction possible. A good work of public art reflects an urban narrative or generates a multiplicity of urban stories. In this sense, Dune is a classic example of a well-functioning piece of community-oriented public art. Dune forces us to interact, whether we like it or not. But it does more. Dune has also created a new stage scenery, inviting other creative talents and daily dwellers to use this singular landscape as a living background for different purposes. People make their wedding pictures here or catch their kids on camcorders; music videos are shot; dance and fashion shows are performed; and soon, if I am correct, Dune will host a Chinese opera sequence.

I am delighted to use this book presentation as a platform to express a warm sympathy for Dune: a valuable, dear and human contribution to the Rotterdam public art collection. I also wish Daan and Studio Roosegaarde a creative, enjoyable and prosperous future.

Don't worry about the world, let's update the damn planet.