Visual Art & Public Space Rotterdam
Curved Form Barbara hepworth
Photo: Aad Hoogendoorn
A sculpture with a hole in it and wires in front of it

Sandra Smets Lecture in honor of the Barbara Hepworth foyer in De Doelen, 08.03.2022 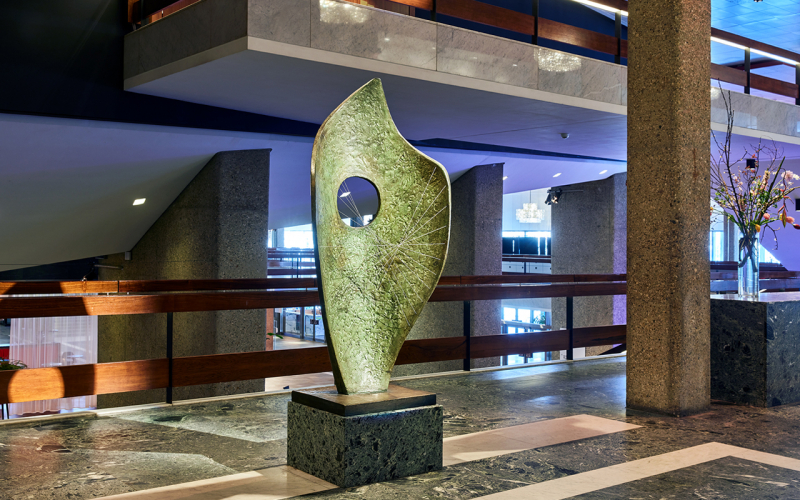 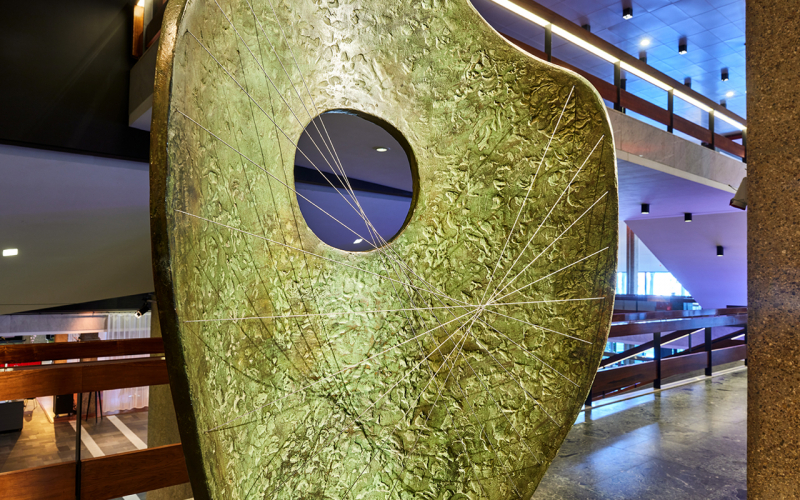 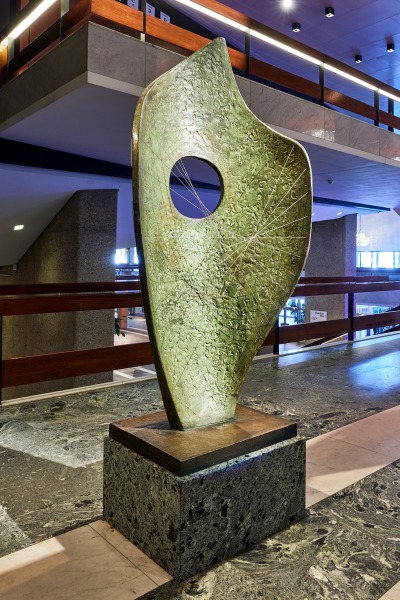 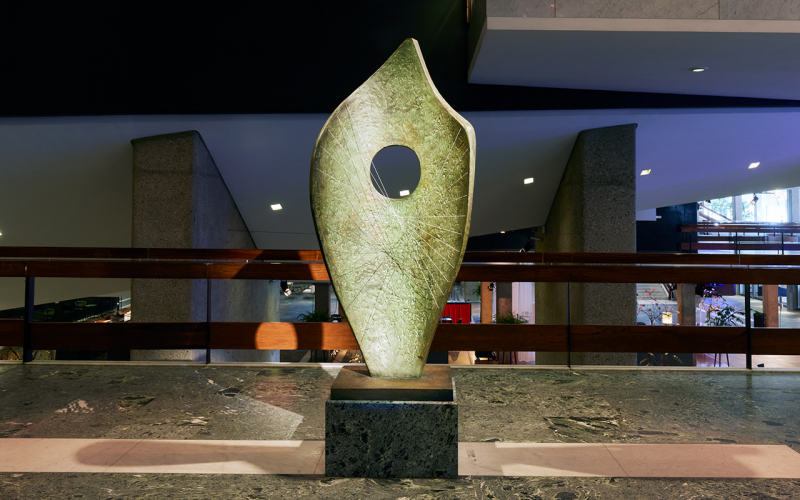 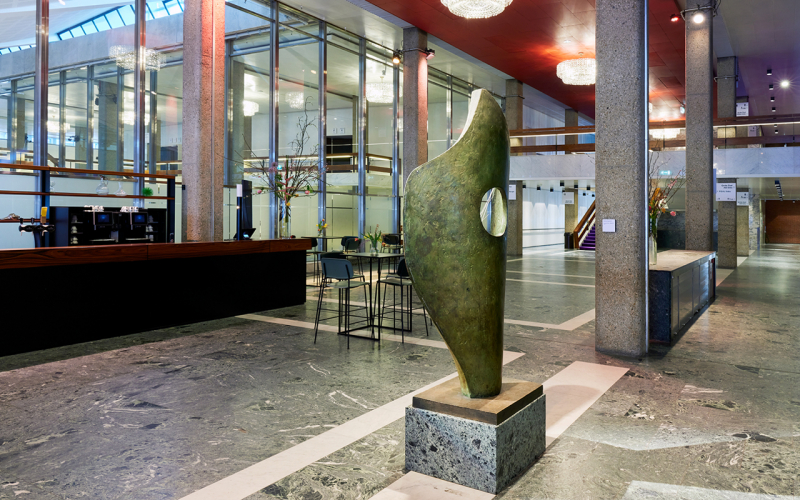 A sculpture with a hole in it and wires, or strings, in front of it in an environment like De Doelen: that makes it very tempting to call this work of art a stringed instrument. An abstract harp, that's what Barbara Hepworth's 1961 sculpture resembles, an ode to a material that looks like music could come out of it. But the question is whether that is it. It was of great importance to Hepworth that her images mainly referred to herself, and not to something from the recognizable world. She explained it once by talking about eggs and logs. We find an egg beautiful, simply because it is an egg. Just like a tree trunk, we can enjoy the beauty of nature, its texture and shape. A log or an egg does not represent something else that it is not. It's the same with her images, she said. It is what it is. But still, when you see this image here, you have to admit that it does something that a harp also does: produce a sound and harmony. So even though this may not literally represent a harp, it still seems fair to draw that comparison.

It also helps that Hepworth understood very well when people draw such comparisons. As she also tells in the documentary 'A Life in Sculpture', she thought it logical if people still see something of the recognizable reality in her abstract images. Because that's where she got it from herself. The landscape in particular provided inspiration for her images, the titles of which sometimes refer to Cornwall or Epidauros, but also to music, with an image called Cantate Domino. And another well-known thread image of her is called Winged Figure, which indicates that you may see an angel in it. Maybe a peace angel.

So it kind of goes both ways. On the one hand she thought that her images are abstract, on the other hand she did not rule out associations. A harp, you might say. Yet she gave many of her images abstract titles that only deal with what you see, that also applies to this image here in De Doelen: it is called Curved Form, and there's nothing wrong with that. It is a curved shape, a bronze curve, containing a void that serves to emphasize the mass around it, and vice versa, strung or intersected with strings or wires. In that cavity something arises which you cannot see but which is there, a harmony, a sound, just like with music.

This pursuit of balance suited Hepworth in a continuous search for essential forms, in which space, material, color, everything had to be precisely attuned to each other. A crowd that conveys emotion, that's what she wanted. To create an essential sculpture that looks so self-evident that the right to exist is contained in it alone. Hepworth also likened sculpture to composing: “In a way, sculpture is close to writing music – in that the composer takes in his entire work from start to finish before starting to write it. Once you get into it, it has its full logic – it's an unavoidable procedure.”

In that procedure she worked with material and rhythm on visual balances, which she would occupy herself with for half a century. That made her one of the great British modern sculptors of the last century. Often they are mentioned in the same breath: Henry Moore, Ben Nicholson and Barbara Hepworth. Hepworth became more famous than her husband Nicholson.

The fact that she became a sculptor was certainly not a matter of course for a girl at that time. She was born in 1903 in Yorkshire, England, her father was an alderman and civil engineer. She often went out with him when he had to go somewhere for work and so she learned early on a love for large structures, engineering. As a child she turned out to be musically gifted and as a teenager she received a music scholarship in 1915. But in the end she chose the visual arts and not the music. In 1920 she attended the Leeds School of Art and then the Royal College of Art in London, where she studied sculpture. It was a classical training, where plaster copies of the classical sculptures were studied. She would break away from that to walk her own path, the start of a great career. She went to Paris, Florence, she studied art history and got in touch with Arp, Mondriaan and Kandinsky and developed her own visual language, an organic constructivism, making her first sculpture with a hole in it in 1932.

That fact, a volume with space in it, is also leading in this image from almost thirty years later. And just as in cheese the holes matter for the taste, so it is with sculptures. It is the holes, the cavities, which must be in proportion to the mass; matter versus space. In that respect you can compare it with the image of Naum Gabo near the Bijenkorf: surfaces are created from wires, from surfaces mass is created and at the same time that mass is mainly space. Henry Moore's brick relief on the Weena is also about this, about straight and organic forms, in a grand whole.

It's the same with Hepworth. And so she sought shapes that were essential to her, as basic and beautiful as an egg, a tree trunk, a pebble, you name it. Her fascination for such an elemental beauty would never tire her. From the XNUMXs she also received commissions for the built environment, but the buildings remained pedestals or walls for free work: in other words, please do not call her work decorative. It is not an adornment for anything else, it is a beauty that comes from within.

If it were up to Hepworth, we'd only be talking about that. When you talk about her art, talk only about what you see. Regardless of the context. The circumstances don't matter. Books have been written just by discussing these kinds of artistic visual issues. Yet that is a limited view. Also abstract art is never really abstract. It always comes from somewhere. In that respect it is nice that this sculpture can be seen in Rotterdam, a city that shows how abstract art really emerges from a broader picture. To a large extent, the Rotterdam we know is determined by the modern architecture and art from the fifties and sixties. That time, the reconstruction, was a time when we strived for a certain pure, essential imagery. You can see that in the construction and visual arts of that time. You can also see it in the Doelen, which dates from that time and in the art collection that can be found here in this building. It is about a modernity that is robust, bare, new and very different from the past. Modernity meant letting go of war traumas. This was important for war-torn Rotterdam that wanted to leave the old behind. Modernity was a reaching for the new.

Rotterdam needed that and that has resulted in a beauty that has become symbolic for the city. Modern art is smooth and bare, as if everything has disappeared, it gives room for new life. That visual language suits this city, and also art of the time such as that of Moore and Gabo, and that of Hepworth. It's the same kind of style; it's also a similar ode to a peaceful future.

So even though Hepworth sculpted for eternity, wanting a timeless art, she too was influenced by the temporality of the present. Her art was also a reaction to the war that was behind her at the time. She first started making wire plastics like this image here in the XNUMXs: sculptures about protection. The outside serves to enclose the cavities. Curve wavy convex exteriors are a shell to allow inside a space which is sheltered, and which is separated, symbolically, by wires. It's safe inside. Unfortunately, that is a desire that is now very topical again, now that we are once again in a war situation in Europe. In any case, art was a comfort to Hepworth: the search for safety in beauty was her response to the war of the time.

When we add all this up, this artwork fits this location for several reasons. It's about war and how to deal with it, in this war-scarred city. It is a work of art that is about modernity, something that matters in Rotterdam, which profiles itself as a modern city. And it fits here because it could well be a stringed instrument, which is so at home in the concert hall of De Doelen.

And so you see that an image that is only about space and form and composition, is still about a lot that is essential. That's what Hepworth wanted, that's her pursuit of eternity. When she died in 1975 she was a museum acclaimed artist who left behind a consistent oeuvre, where harmony never became dull but is always accompanied by a certain energy and vitality. Reach for a fundamental beauty. Music does that too. While sculpture by stone and bronze and clay is very much connected to the ordinary, music is literally immaterial. It creates a symphony and so does Hepworth. An instrument for beauty that you cannot hear but can see, fine thin image sounds, rhythmic and organic. That makes this image a symphony, which is about beauty, security and eternity.

Sandra Smets is an art historian and writes about art and public space in the NRC Handelsblad, among others.