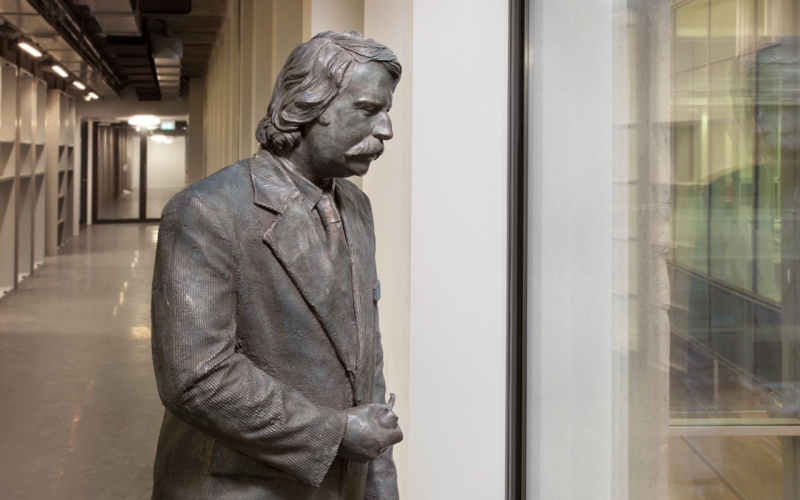 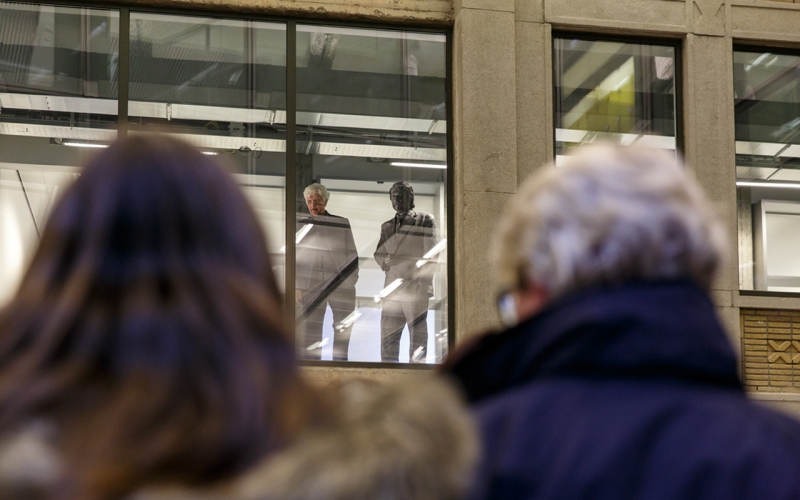 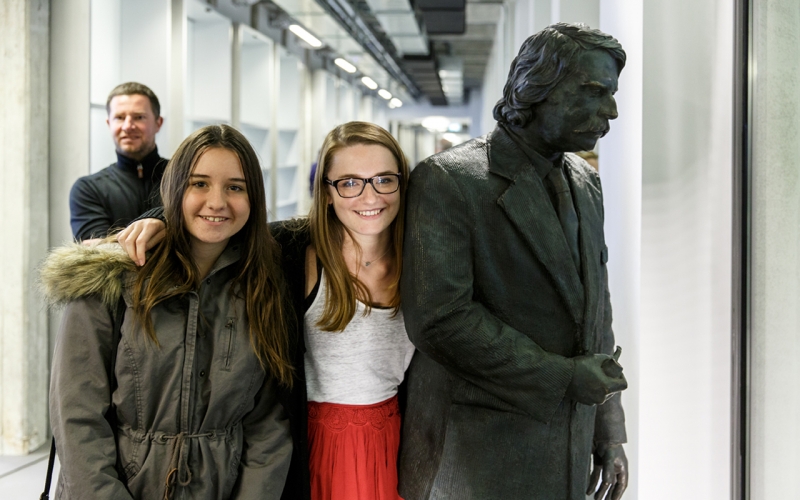 It was a complex assignment: design a monument in memory of former mayor André van der Louw for the Timmerhuis. Complex, because artist Herman Lamers only starts each performance after a thorough analysis. He encountered the problematic question of who or what exactly had to be remembered. Do the clients (friends and party members of Van der Louw) mainly want to honor politics, a party, leftist traditions, or indeed this person and if so in what sense or function?

Lamers' work always focuses on a specific question and location. The human encounter is central, without this having to lead to an entertaining or pleasant result. Abstraction, realism and poetry go together in the choice of form and material. Anyone who sees him as a sculptor because of this often figurative approach is mistaken. Lamers is a conceptual and spatial artist for whom resemblance is not the goal, but a means of communication: figuration rather than abstraction invites to read a work of art. And especially when a work of art contains different layers of meaning, accessibility is a welcome step towards greater understanding. Moreover, by combining this recognisability with cuddly-looking materials - glass, wood, plastic, bronze with different patinas - Lamers' work elicits a physical approach. He wants involvement in an image, only then does a relationship arise. He does not find beautiful picture art interesting.

More than thirty years ago, Lamers started his artistry with large spatial installations in vacant buildings. Since then, his work has been about the environment, for which he designs surprising visual comments. For an atrium in the AMC in Amsterdam, he designed a constellation of abstract library walls based on digital searches. In Rotterdam he designed hippopotamus heads for a quiet pond in Beverwaard that pop up through a mechanism and disappear under water.

Be in the center Giant of Rotterdam. This image is life-size, which in itself does not stand out because statues are always slightly more than life-size. To make the scale tangible, Lamers designed an installation with a stage that invites you to enter, take a seat next to the giant, see his furniture and shoes, and thus realize the difference in size in this contact. It is through this context that the sculpture functions.

Because Lamers manages to successfully complete complex assignments through figuration and communication, he completed three assignments in 2015 via the CBK Rotterdam. For an intervention on the Diergaardeplein he tempted a multi-voiced client consisting of neighborhood parties with an accessible design: four posts with nests on them, in one of them a zebra nesting. Underneath the cheerful appearance is a reference to the disappeared zoo from which zebras and sea lions fled into the city during the bombardment of 1940. He also developed a drawing for the Timmerhuis, based on his design ideas for an image of Van der Louw. At an earlier stage he had suggested a portrait of the former mayor for the wall where the old and new Timmerhuis meet. He also proposed to Van der Louw to position an imaginary bridge, which he presented in LED form. The idea was rejected for a work about Van der Louw, but it appealed to the architects of OMA in such a way that it became loose, and so led to a second assignment for the Timmerhuis.

Abstract or figurative, all Lamers' works are primarily about communication. He makes them with the viewer's reception in mind: environment, presence or absence of a pedestal, knowledge from art history, everything contributes to how we experience art. The question of what figuration can mean today is a complex one, especially with a political image. Politics is not free from vanity, and left-wing politics certainly used art as a means of power in the last century. Nevertheless, Lamers also opted for figuration for Van der Louw because this work is about the encounter with the other, the other - that works through representation. The relationship with the location is very important and prevents the image from becoming a symbol of quantity. Lamers' choice fell on a window on the first floor above an interior space. There Van der Louw is standing as if he were one of the civil servants walking around there. He looks slightly bent down through the window. You can walk past him and touch him, but not look into the averted face. From below it is the other way around: you cannot approach him physically but you can look him in the eye.

All in all, the sculpture is an intriguing result for Van der Louw in an unexpected place. Designed for and with the location, the sculpture can only function there, in that sense incomparable to the classic bronze figuration to which Lamers refers. From all angles, the work of art contains different layers of meaning, while despite this complexity it appears approachable above all else. Lamers hopes that spectators will experience the work at different levels. And to emphasize that the view of a work of art is not unambiguous, Lamers had Atelier Lek design a lighting plan. Due to changing lighting, the image sometimes appears more of a silhouette, then more sculptural. Our perception is never fixed.