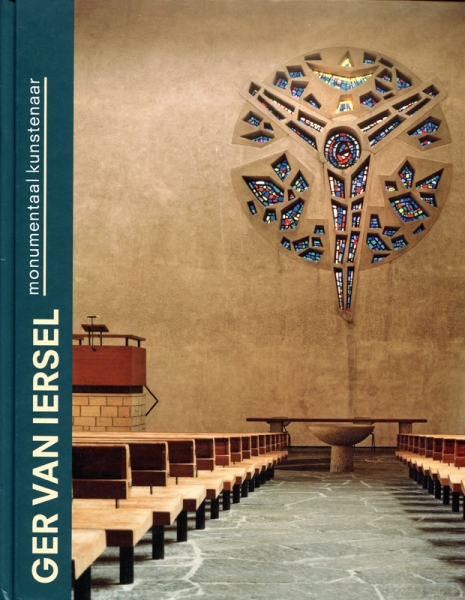 Ger van Iersel. Monumental artist. It can't get any shorter. Is not necessary. Once, after the Second World War, we knew exactly what a monumental artist was. Monumental art originated from a social art practice. Monumental art was ours. It was a special form of urban embellishment that was mostly made within architectural assignment situations. Monumental art was visible on the street, in the city, in the church, in schools; visible to everyone, twenty-four hours a day. Prior knowledge of the visual arts was not required. Sometimes the works were figurative in nature, narrative and recognizable. Sometimes they were more symbolic or abstract, but almost always colorful, so that they could illuminate the gray facades of the reconstruction architecture. Often placed in or against the background of a facade, the genre was dominated by mosaics, graffiti, steel and concrete reliefs, glass appliques, colored glass in concrete and wall paintings. The 'reconstruction art' flourished in the Netherlands in the 1945-1965 period.

Rotterdam in particular was a grateful buyer of this art. The bombing of 1940 had destroyed the city center and the reconstruction required an enormous building task. The new architecture was generally business-like and produced many gray boxes that cried out for color, decoration and interventions by visual artists. "Give us walls!", Artist Louis van Roode begged the city council shortly after the liberation. A group of Rotterdam artists wrote a manifesto in 1946 - the tone was optimistic: 'Architecture can renew the human environment, but art can involve people in that renewal. That is why wall and artwork will be one '. That was also the opinion of Ger van Iersel. "Monumental art is and remains bound," he said in an interview. "It is precisely the unity of architecture and art that gives the whole its added value." Within a few years, hundreds of artists in the country were involved in the reconstruction, often aided by the 'percentage scheme', which was increasingly applied to new construction. But after the reconstruction was considered complete, monumental art slipped into oblivion. The art would have been too Dutch, perhaps provincial, and people now prefer to focus on international developments. As a result, many artists lost sight of the canon after 1970, an art historian commented. A monograph was dedicated to only a few.

Now that the demolition of many buildings from the time of reconstruction is taking on major forms, we are suddenly confronted with the monumental art that lies behind these buildings. Not only buildings, but also works of art, die every day. Reluctantly, however, a process of revaluation has started. Think of the nice overview work Art of reconstruction. The Netherlands 1940-1965 (2013), published under the auspices of the Netherlands Institute for Cultural Heritage. The book contains an interview with Ger van Iersel. In that conversation, the artist revealed that he had not had a monumental education, but learned all the techniques from other artists: "We talked about our assignments and how we would approach it - there was plenty of work for everyone who wanted to create monumental art." Van Iersel, for example, bought glass from his colleague Louis van Roode. However, many of these monumental works of art have already disappeared today. Perhaps that is why the number of 'monument activists' is increasing: people who organize themselves against the destruction of characteristic buildings or monumental works of art, often supported by heritage associations such as the Heemschut Foundation. This development also benefits 'forgotten' artists who have played an important part in the urban beautification of the Netherlands. Because academic research is not yet available, the advance of the 'actor-author' is a gratifying phenomenon. This is about enthusiasts, often family members. They portray the life and work of an artist and, often for the first time, present an overview of their oeuvre. Such publications provide unique sources that, in time, give us more insight into the rise and fall of reconstruction in the Netherlands. Rotterdam in particular is fortunate to praise itself with that attention. Jeroen van Berkel, for example, wrote a book about his father Johan van Berkel. Sculptor (2006). Hans Rombouts wrote with The Holy Family in Overschie: Gérard Héman (2013) a monograph about his father-in-law. From the hand of Willem Heijbroek appeared Louis van Roode. Master in monumental customization (2015) and Caspar Dingjan working on a study by Rotterdam glass artist Geertrui van Geldermalsen.

The boom has not yet come to an end, it appears Ger van Iersel. Monumental artist (2016). Frederik Haver Droeze has made a beautiful but also useful book about his father-in-law Ger van Iersel, who died in 2014 at the age of 92. Van Iersel created an impressive oeuvre, but his name also seems to have been dissolved in the cultural history of Rotterdam. That does not apply to his many works. Perhaps the most famous is his depiction of Christ, made of glass in concrete, which adorned the rear of the Pauluskerk in Rotterdam from 1960 to 2006. During the demolition of the church in 2006, hundreds of people signed a petition against the removal of the Christ. It did not help. Hundreds of thousands of visitors to the subway station below Central Station are aware of the enormous ceramic facade relief that has colored the gray hall since 1967 for years. This work too died in the violence of urban renewal. Van Iersel often worked for Christian schools and churches. That is not so strange, because he had strong ecumenical beliefs. That conviction was certainly fueled by the events of the Second World War.

Already during the war many artists and intellectuals became aware that political, intellectual or religious union was desirable for a new era. Many had plenty of time to think. Many artists had lost their studio in the blaze of the bombing, were unable or were not allowed to exhibit any more, and many people went into hiding to escape work. Ger van Iersel also went into hiding with a lawyer on Emmaplein. But there were also other views in the city. Some colleagues were enthusiastic about the New Order. With money from the occupier, artworks from many dozens of Rotterdam artists were displayed and purchased. When the liberation came, the artists' community was completely divided. According to the artists Nico Benschop and Piet Roovers, the community wallowed in resentment and shame. That is another reason why the desire for synthesis and concordance could become the core of monumental art after 1945. The idea of ​​synthesis was sometimes political in nature (think of Dick Elffers' socialism), sometimes secularly oriented (as with the 'heretical Catholic' Louis van Roode), sometimes spiritual (as was shown by Gérard Héman's conversion to the Russian Orthodox Church) , but could also be ecumenically inspired, such as with Van Iersel. The post-war ecumenism sought unity and cooperation between the different religious movements within the Christian religion. That search for 'unity' became a dominant theme in the work of many monumental artists.

Hardly anything has been written about the role of (Christian) school and church boards during the reconstruction and their contribution as commissioners of monumental art. That is also why a book about Ger van Iersel is more than welcome. Although the book is not limited to Rotterdam, Rotterdam is still the Leitmotif. The artist was an exemplary representative of the Rotterdam generation of monumental artists (although Van Iersel started relatively late and a large part of his oeuvre only took shape after 1965). He grew up during the hardships of the bombing and the war, was active during major city events such as Energie 1955 (E55), is the first artist member of the Committee for the Percentage Regulation in 1968, and produced a series of characteristic artworks that have become characteristic for the street scene of Rotterdam. Indeed, Ger van Iersel, monumental artist.