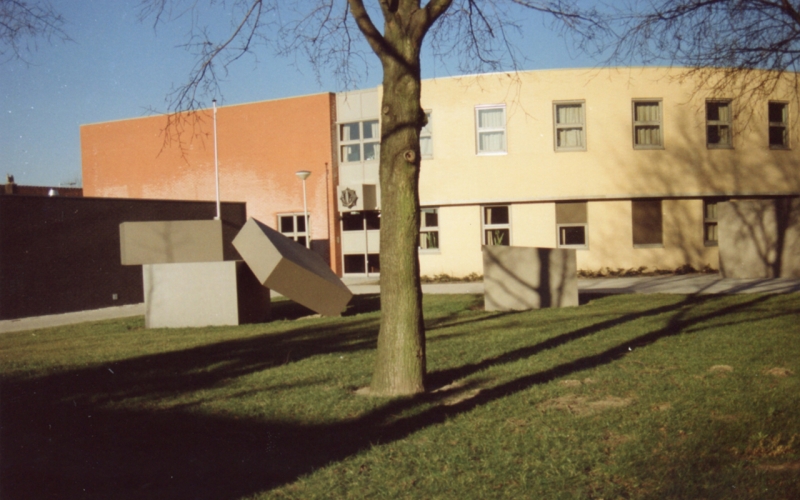 Rotterdam liked to compare itself with American metropolises such as New York, but it had no such metropolitan sightlines. That thought was one of the motivations of Lon Pennock when he was asked to design an artwork for the central reservation of the Blaak. Two slender black pylons were unveiled there in 1984. The ensemble was a silhouette reminiscent of New York Twin Towers. But you had to experience that mainly by standing underneath and looking up: then you did experience the view of a metropolis. Looking up along those two rising dark walls you can see the sky above. That was the metropolitan feeling associated with a metropolis. It may have been the only place in Rotterdam where urbanites have experienced metropolitan experience.

Lon Pennock died on Monday March 9, 2020, after a short illness. The statue on the Blaak, entitled The River, is close to the art academy where he was also a teacher for years. Remarkably, the image also remained popular with subsequent generations of students, years later. This is striking because Pennock belonged to a different generation, makers of bold abstract images, geometric shapes without expressionism, which are not easily embraced lovingly. That this happened with his work is because he was one of the masters in this trade. This can be seen in an intelligent yet light touch, which gives these kinds of large monumental objects a versatile appearance: light, rhythmic, harmonious, playful, humorous and simply beautiful.

Sometimes that finesse is in the title - Caravan is called a rhythmic sculpture of alternating rectangles that otherwise would have remained mainly abstract, Ich and Du two non-figurative objects that suddenly merge sensually. It also lies in a certain elegance and tension in the image, for example with the two enormous corten steel rectangles balance (1981) in Kijkduin in The Hague, the city where he himself lived. As a modern sculptor he made an important contribution to Dutch art history. He leaves behind a large oeuvre of sculptures and graphic work, which also consists of geometric shapes that seek out, overlap and give space to one another. It is like a stylized choreography that, despite the great compositional diversity, never became clinical. "Poetic geometry," said Thomas Köllhofer in Pennock's monograph published in 2016 by Jap Sam Books.

Pennock started his career in The Hague, where he studied at the Royal Academy of Art from 1962 to 1967. Then he received a scholarship from the French government to further study at the École des Beaux-Arts superior in Paris. In 1969 he received the Buys van Hulten Prize for young sculptors and the Jacob Maris Encouragement Prize, a year later he was allowed to participate in the International Symposium for Metal Plastics in Kosice. In the seventies he exhibited both in The Hague (Pulchri, Galerie Mathoom, Haags Gemeentemuseum) and abroad (Finland, Belgium, Paris, Düsseldorf, Art Basel). That long list of exhibitions would continue to grow for the rest of his life, until 2019 exhibitions at Galerie Slewe in Amsterdam, among others. His work is in private, corporate and government collections.

But just as important as the exhibitions in galleries and museums was his art in public space. There he worked on behalf of various Dutch municipalities, especially in the seventies and eighties. That was a good time for art in public space. There were many assignments, mainly due to the application of the percentage scheme. Scaling was also possible, which gave room for artists who could think big. In a 1989 publication about his images, Jean Leering, former director of the Van Abbemuseum, compared the creation of Pennock's images with the erasure of old ideas: innovative visual reductions were created that are very touchable.

Pennock was a good observer, Leering said. He belonged to a school of sculptors, constructivists, who sang a geometric language from the environment - a follow-up of the environmental design of the seventies and eighties. In doing so, he showed himself ahead of his time. The image Rhythm of three at the Rottemeren, was later labeled by Jetteke Bolten as the earliest minimalist work of art in public space. Unfortunately, it is now beat up, something that applies to a lot of outdoor art that requires maintenance that is not committed. And that while Pennock showed himself flexible and liked to think along when an environment changed so that an image no longer functioned as such. Bee The River for example, the Blaak was changed, with a turn right past the statue. Because of its proximity, but also because of the changed city with its shop windows, Pennock decided in collaboration with CBK Rotterdam to have it painted gold in 2014, which gave the statue another life thirty years later.

In the rudimentary design language with which he was involved, he managed to develop a very rich variety of always different objects and graphic works. Images that cannot be interpreted immediately, and whose exterior images have many different views. Later in his life he also made small plastics and continued to exhibit until the very end. Much appreciated as a teacher, partly because of his amiable character, he maintained many contacts with the art world. He traveled back and forth between his studios in Germany and Scheveningen. Yet it was not a simple life. Every fifteen years he endured an illness or setback, which he managed to get over and over again. Until this year. Lon passed away on March 9, 2020.