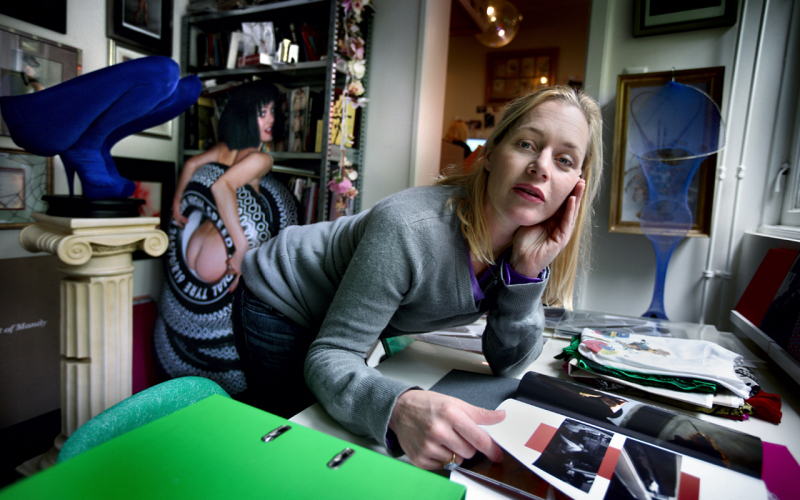 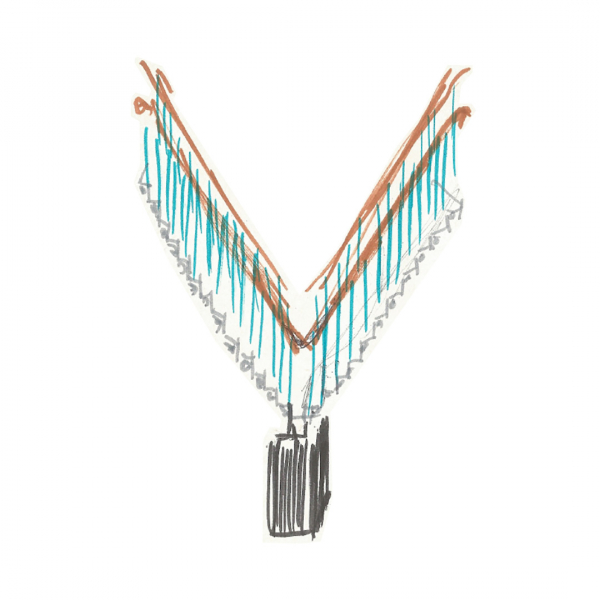 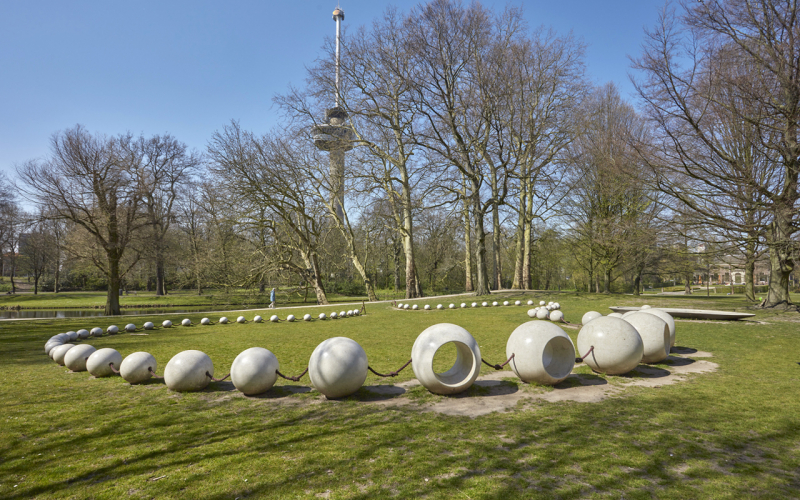 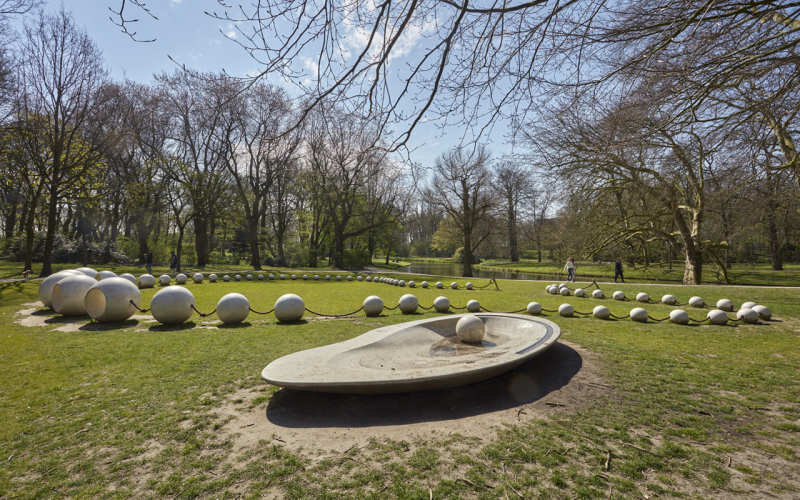 Madeleine Berkhemer passed away in September 2019 after a short illness. BKOR asked Sandra Smets to write a piece about her work in relation to Rotterdam. Hans Wessels made a short clip of the image The lost pearl (2015) located in Het Park. At the moment work is being done posthumously on the elaboration of her design Parabola Blues for the Garden of North.

Without a sexual charge, art has no right to exist, stated artist Madeleine Berkhemer, who died last year (Bergen op Zoom, 1973 - Rotterdam, 2019). Art had to tease, excite, seduce, it could even make the viewer uncomfortable - all as long as it did not leave people unmoved. That is why the term sexual charge can be interpreted broadly - Berkhemer's oeuvre contained both explicit nude photos and abstract images with sensual stylizations, where eroticism is only an elegant residue. It is an art that expresses a need for contact and that suited Berkhemer as a person, a generous and optimistic woman with an open attitude. She was someone who could work well with everyone, but who meanwhile wanted to safeguard the artistic value of her work. In it she chose her way beyond the beaten art path, also towards the fashion industry or photography where she posed naked for erotic and fetish magazines, a genre that usually does not involve visual art.

Berkhemer therefore had a different background from other artists. When she went to study at the Willem de Kooning Academy in the 1995s, she did not opt ​​for autonomous but for fashion. Although she did make a feminist painting for her graduation presentation: an chthonic cave, an ancient phenomenon, which stood in front of the vagina. A bizarre performance that looks eerily man-devouring. Painting was an exception and from 1999 to XNUMX she was an assistant to fashion designer Martin Margiela. Her post remained in Rotterdam, but she often went to France where there was a connection between her lavish work and both luxury seaside resorts on the Cote d'Azur and with the fashion world in Paris - where her work can be seen posthumously this year at collector and fashion brand Agnès. b .. When she was still exhibiting there while alive, the openings were reportedly more crowded than in the nearby Center Pompidou.

She was therefore better received abroad than in Rotterdam, which she felt had less to offer her, but with which she nevertheless always remained connected. In the XNUMXs that she started there, Rotterdam had a small art scene without a spotlight. Because of that lee, there was room for brutality. In the In Memoriam that appeared in NRC after Berkhemer's death, she was mentioned in relation to that scene by people like Erik van Lieshout, Charlotte Schleiffert, Karin Arink and David Bade. Artists who each had an explosive and physical imagery, just like her, but who you would never confuse with each other - as recognizable as their own manuscripts. Berkhemer's role was to broaden her field of activity beyond the visual arts. Because of her fashion background, she had something to do with the glamor that attached to it - her work remained sensual, a theatrical role-play, so that artistic and sexual tension reinforced each other.

This made her stand out outside the Netherlands, although she remained active in her hometown of Rotterdam. There she was given a major exhibition in TENT in 2006 during the Motel Mozaïque multi-arts festival. This exhibition, 'Milly's Maserati Show II', was already a multi-arts festival itself, including photo collages of herself as the pin-up girls Milly, Molly and Mandy, in a play with clichés. Each of these alter egos had a luxurious car. These Lamborghini, Maserati and Facel Vega were equally erotically dressed, with related characters. It was a busy opening with an unusually mixed audience, coming from all kinds of sectors, including car dealers who only decided after the exhibition set-up that the loan of the exclusive car brands could be extended for the duration of the show - something she had already taken into account for a long time.

In the years that followed her work became more abstract and less narrative, but it retained its sensuality. The main material she worked with was pantyhose. She's not the only one to experiment with this stretchy nylon to build environments, think Hans Bellmer and Ernesto Neto, but her creations were not so much gagged or architectural as they were opulent. She stretched pantyhose into stylized translations of eroticism and accompanying role-play of concealment and revealing. In these three-dimensional objects she incorporated glass spheres that are reminiscent of fruits or buttocks. The materials used are transparent and at the same time the opposites, the textile soft and cuddly, the glass hard but fragile. And both are extremely strong, despite their apparent fragility. With these glass bells and spheres in that interplay of lines, she made large structures that could be attached to ceilings and walls, on the one hand decorative and on the other hand branching and embracing animals. One of them, Exciting Directions, is included in the collection of Museum Boijmans Van Beuningen, and a different design hung at Het Nieuwe Instituut for a long time.

In 2010 she designed a giant ceiling sculpture with the title for Bergarde Galleries Garden of Earthly Delights, referring to the lust-ruled landscapes of Jeroen Bosch centuries ago. The step to a real outdoor garden is not illogical, although this requires different materials. In 2015 she designed a gigantic pearl necklace with an open oyster for the Park at the Euromast, The lost pearl, which seems to be incidental. The beads vary in size and are partly cutaway, similar to the idea of ​​mass versus emptiness in modern sculpture, which in this white version is reminiscent of Barbara Hepworth's sculptural oeuvre. At the same time, the idea of ​​a pearl necklace is mainly something from other times, from pre-modern Romanticism.

Just as the chain is a jewel for the park, so is the mirror glass fence Lay Show that she designed in 2019 after previous variants for the forecourt of the Arminiuskerk. It consisted of man-sized silhouettes of high-heeled shoes and fishnet stockings. Fences have always been the lingerie of a city, but with his mirror glass Berkhemer also literally involved the body of the passers-by: you see yourself reflected in these images and in relation to the cityscape. Hard as eroticism can be, Berkhemer used it precisely to make her work accessible.

With its accessibility, friendliness and a Pop Art-like humor, Berkhemer's outdoor art also fits in Rotterdam. That has a certain tradition there. Since she was born, artists have been agitating against the greyness and harshness of the functionalist port city. They did and do so with color and legible art. Berkhemer too, but above all with a sensuality that she labeled 'sculptural femininity'. It is gaining in significance in public space because these qualities (softness, elegance and above all humanity) are lacking in the built city.

For a city that should be for everyone, soft elegance is one way to make it appealing and accessible. That is especially true for The lost pearl, play object and work of art in one. You can on it, in it, everything is allowed, making it a popular work of art with broad support. It is a necklace that everyone sees off it and there is an open oyster, which makes it not only understandable, but also fairytale-like. Mystery and sensuality are closely related.

She translated these characteristics into the design for Noord. In 2019 she was asked with a number of artists to make a sketch design for the Tuin van Noord, near the former prison. From these four, the choice fell on Berkhemer's design: Parabola Blues. It is a linear image that she was inspired by The thing van Naum Gabo at the Bijenkorf and through the latticed windows in the prison building. Parabola as in the mathematical form which is, approximately, a V shape. Blues as in the melancholy set to music, connecting people and sharing someone's feelings - this is a garden with a charged history.

Her plan consisted of re-using two unemployed stairs that were once walked by countless prisoners' feet. They put them together in such a way that they reach up like arms, a hyperbola or V-shape, symbol of freedom, towards the sky. A more beautiful shape is not conceivable for someone who designed this in her final phase of life. While Berkhemer was working on the assignment, she started having health problems. Not much later, the diagnosis was found to be cancer, after which she had only a few months before she passed away at the age of 46. During those last weeks, she is said to have enjoyed drawing on this design. She is survived by her husband and three children. The memorial service took place in the ballroom of the Wereldmuseum, with a landing to The lost pearl in the park.

As a result, appears Parabola Blues posthumously, an object that transforms two staircases into a jewel: it sits on a terrazzo plinth and is decorated with golden threads, materials that will all shine in the sunlight and enhance the original turquoise staircase paint. Just like the pearl necklace, this is also a piece of jewelry. Elegance to make life more beautiful, that was Berkhemer's aim.

Sandra Smets is an art historian and writes about art and public space in NRC Handelsblad, among others. This article was created with thanks to Anton Hoeksema.