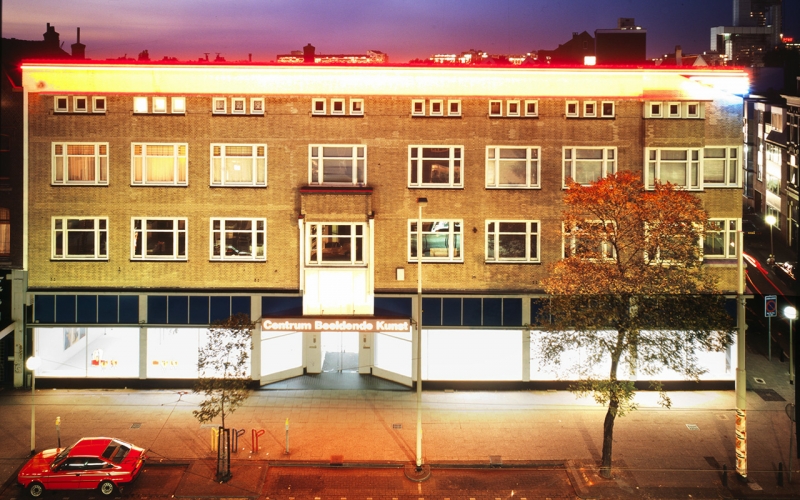 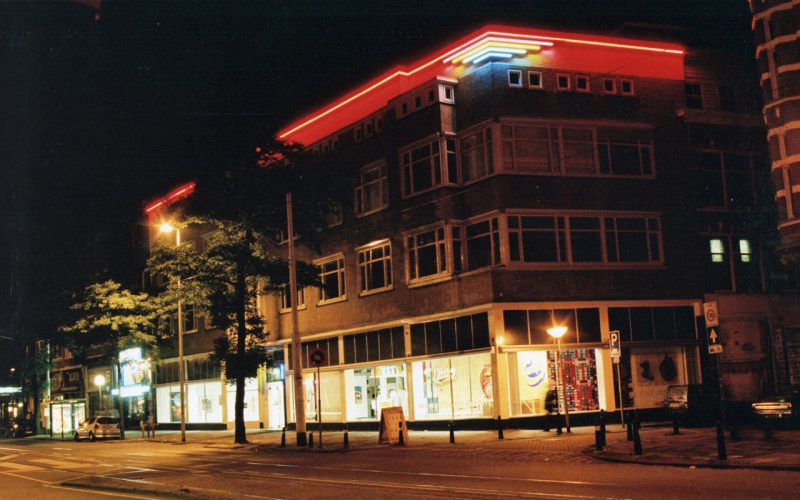 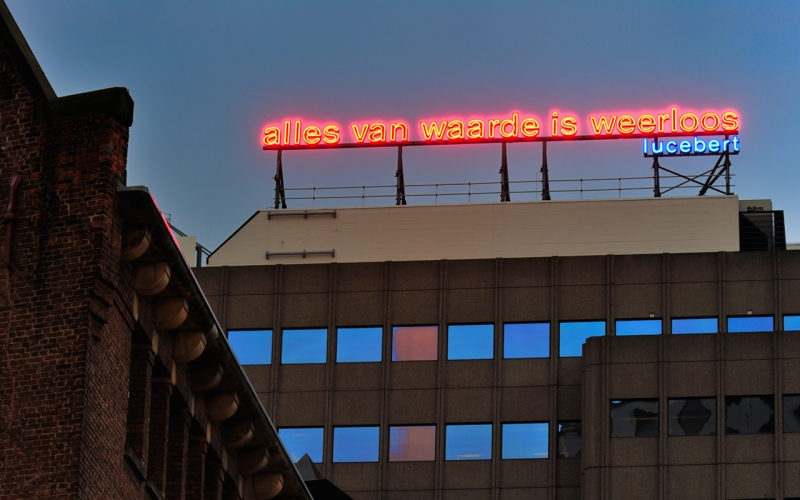 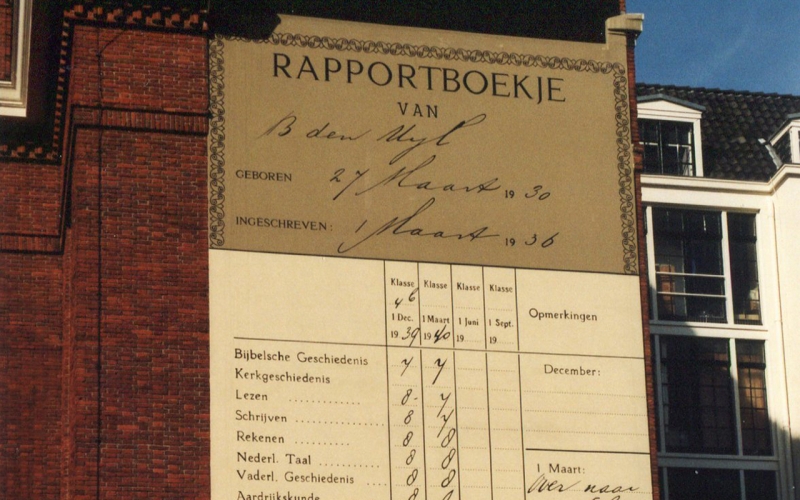 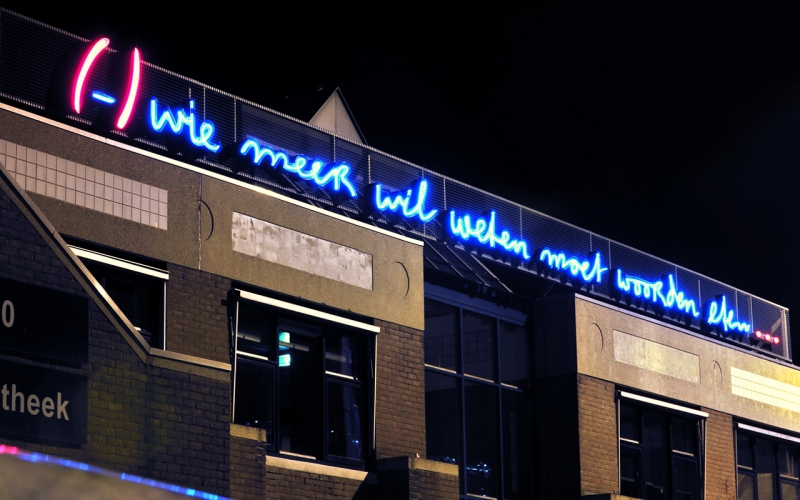 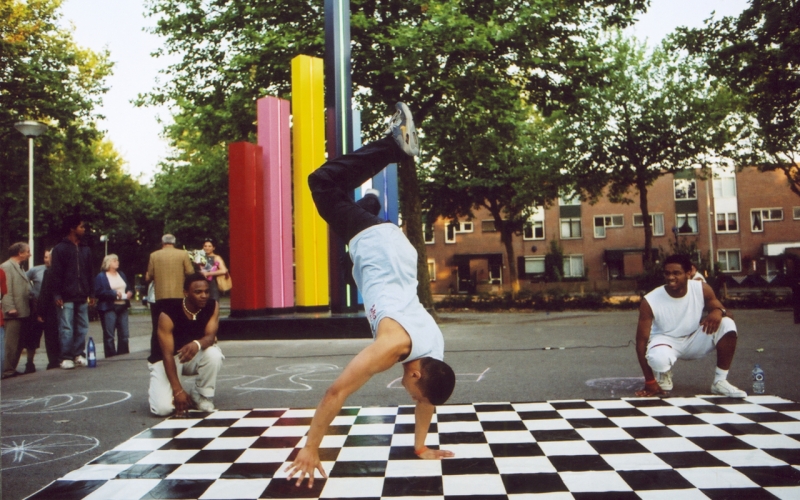 On Sunday 21 in May 2017, artist Toni Burgering died. It Algemeen Dagblad / Rotterdams Dagblad commemorated him as a 'neon artist', famous for Lucebert's line of poetry Everything of value is defenseless. The line of poetry, placed in colorful neon on the roof of insurance company Nieuw Rotterdam on the Blaak 16, welcomed train travelers who visited or left the city for years. Even after the disappearance of the air track, the rule remained a figurative mark of Rotterdam. The owners and users of the building, on which the rule was adorned, alternated rapidly, but the neon artwork was always maintained. A few years ago, the rule related to renovation work was temporarily removed, but recently, just before Toni's death, the rule returned to its familiar place.

The artist made more images in the public space of Rotterdam. For the facade of the old library he made a mural of it Report by Bob den Uyl (1989). He also designed Question of Balance (2006), a light sculpture on the Evenaarsplein in Prince Alexander, and he placed the poetry line of Gerrit Kouwenaar in neon Those who want to know more must eat words (2008) on the roof of the library on the Grote Visserijplein. Toni liked being in the company of writers and poets.

Toni was born in Barneveld in 1937 (he decorated, among other things, the town hall of his hometown). In Arnhem he started his career as a cinema advertising painter and in Rotterdam he worked as a window dresser for Vroom & Dreesmann. He attended the Rotterdam art academy and developed a special interest in pop art. During the years 1961-1964 he exhibited in the Groothandelsgebouw and the AMVJ building. Thanks to Wim Gijzen and Woody van Amen, his artistic existence was professionally embedded. With his mischievous behavior, swagger and bright yellow suits, Toni was a striking appearance in Rotterdam. He was fascinated by the youth culture in the United States: consumerism, space travel, eroticism and pop music would play a major role in his work. He also left America with a lasting love for neon. He visited the Apollo rocket launch station at Cape Kennedy, met actors and actresses on movie sets in Hollywood, attended jet-set parties celebrating the motto sex, drugs and rock and roll, and met artists like Andy Warhol.

In From Amen to Zekveld (1994) Gepke Bouma wrote: “In 1966, Toni had his first solo exhibition at Galerie Delta with work that was inspired by America and American Pop Art. They are images taken from sex magazines of naked women, in classical-erotic poses in civil interiors or stretched out on the American flag. He soon became fascinated by space travel, that triumph of technology with mythical proportions. His aerospace works consist of flat painted scenes, after newspaper photos, cosmonauts floating in space or astronauts on the surface of the moon. ”

Toni became well-known with those works. Collectors purchased works from him and Museum Boijmans Van Beuningen also included works in the City Collection. In 1970 he made the proposal to place a huge Saturn rocket on the Schouwburgplein, but it Human Monument, as he called the image, sponsors swept off the table like grotesque. In the 1970 years he devoted himself entirely to neon. He made a dozen works for the public space of Rotterdam and a number of light objects from his hand can also still be found in the Art library. For years, Toni worked on a plan to wrap the Euromast in pink neon, like a huge cotton candy, but sponsoring campaigns and presentations did not result in concrete action. Toni was also a great lover of artworks in the public space. Armed with a photo camera, he made dozens of morning walks, capturing sculptures, murals, facade images and ornaments. At home, in his home at Waterwerk in De Esch, he created a gigantic image archive that he transferred to CBK Rotterdam in 2006. To this day, the BKOR website makes grateful use of Toni's visual material.

For a long time Toni worked from a beautiful studio in the old library. Because he was intensively involved in the design of the Education Museum, which was located in the old library on the Nieuwe Markt, he was offered the studio 'for life' as a thank you. Here he made designs for his neon sculptures and he also realized a series of paintings by pop musicians, including Beyoncé, Prince, Bob Marley, Michael Jackson, Kurt Cobain and Amy Winehouse. But after the Education Museum in 2013 left Rotterdam, the promise 'for life' turned out to be an empty concept.

Toni Burgering was a striking artist who made the whole world his field of work, but also belonged completely in the development that Rotterdam is going through after the Second World War. For CBK Rotterdam, Toni has been an inspiring partner in many ways, for many years his neon work on the roof of the building on the Nieuwe Binnenweg even served as a kind of logo for our visitors. We are pleased that a number of other works in the public space of Rotterdam keep his spirit under us.