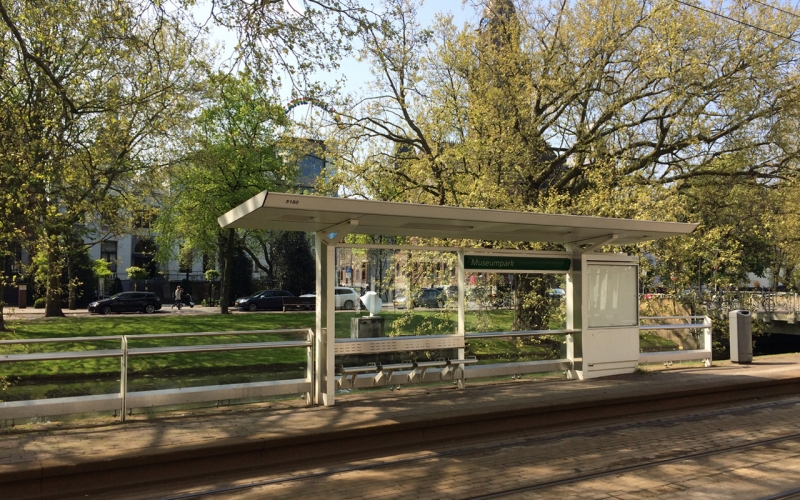 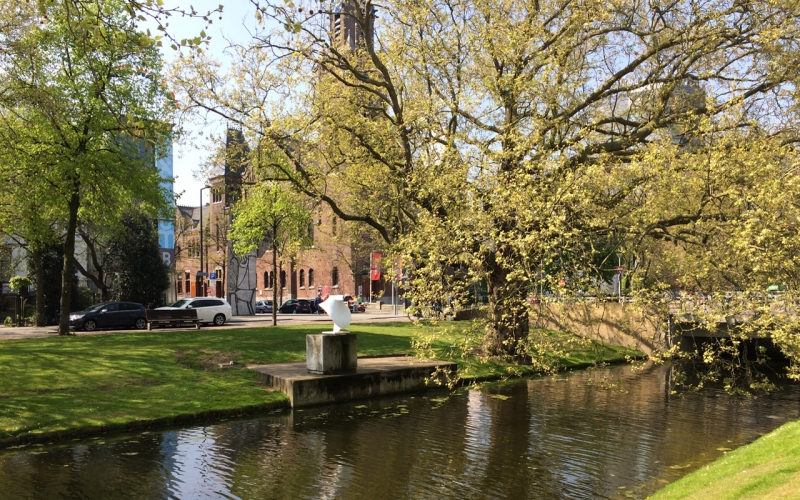 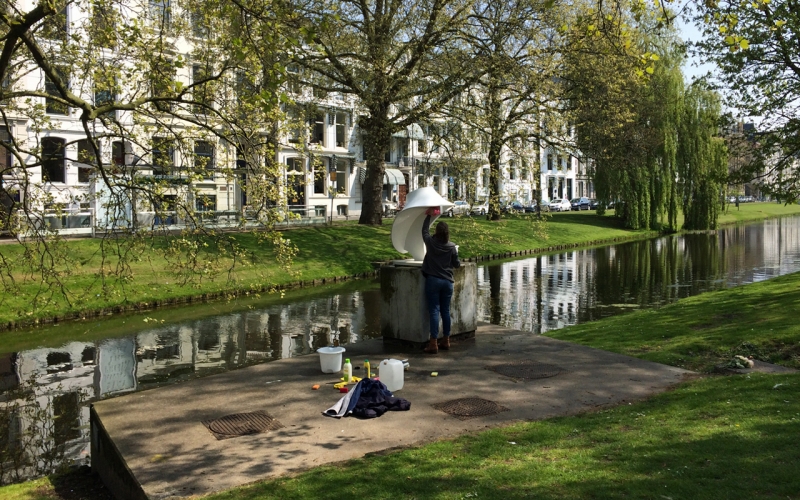 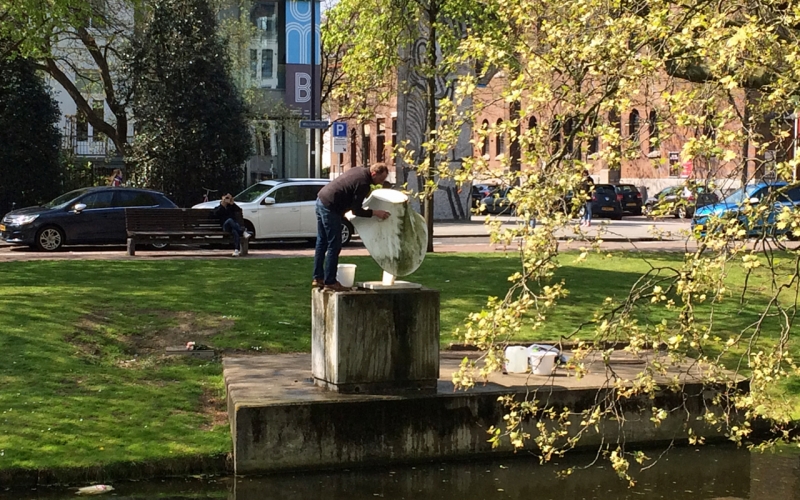 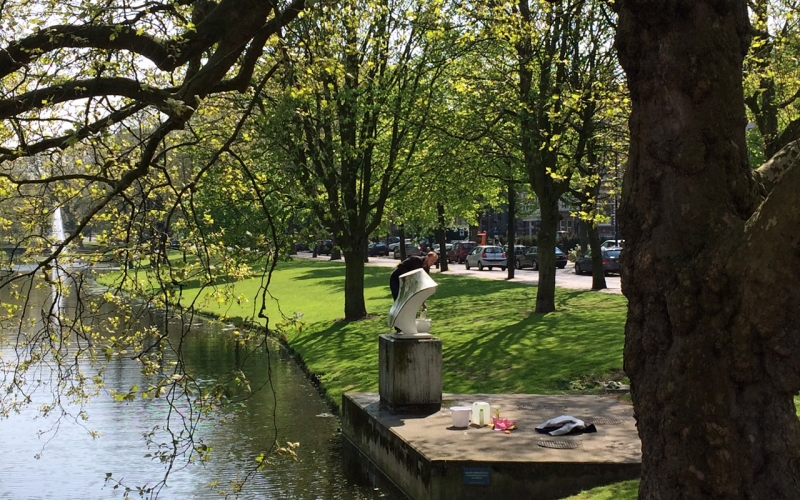 On Monday 17 April 2017, artist John Blake died, from 1989 to 2010 teacher of Autonomous Visual Arts at the Willem de Kooning Academy. American by birth, Blake then gave an international dimension to the Rotterdam academy. John Blake was then involved in the introduction of the field of 'mixed media'; nowadays that is very common, but very new at the time.

John Clemens Blake was born on January 11 in Providence, Rhode Island / USA, son of John Holland Blake and Elisabeth Romano. He studied painting at Carnegie-Mellon University in Pittsburgh, Pennsylvania. He then followed the 'Norfolk Program' at the prestigious Yale University in New Haven, Connecticut. In 1945 he obtained his BFA there (Bachelor Fine Arts). He then moved to London for a Masters degree at the Royal College of Art, which he completed in 1967. In those years, many new paths were explored and opened up in the visual arts: think of Minimal Art, Conceptual Art, and the introduction of entirely new materials and media, such as photography and film, and video - at that time in its infancy. John Blake continued to live and work in Europe: initially in London, and from the mid-1980s in the Netherlands. He was a pioneer in the new field called 'mixed media': he made site-specific installations, photo constructions, drawings and 1969-dimensional work, projections with slides and films - but also permanent works in public space.

John Blake as a teacher

At the end of January 1989, after a number of guest lectureships, John Blake became a teacher at the Rotterdam academy - initially for one day a week; he remained in service until 2010 - he then became 65.

Blake entered the academy on the initiative of Kees Verschuren: “Within the Autonomous Art department we then formed the departments Drawing, painting and design (TSO), Sculpture, Graphics, and Monumental & mixed media - that was completely new at the time. I had initially invited a number of guest lecturers: Joseph Semah, Jeffrey Shaw, Nan Hoover, and Madelon Hooykaas & Elsa Stansfield, and John Blake. I met him through a mutual friend and from the series in Situ, a number of experimental projects for art in public space in The Hague. He had also realized a few location-related projects in Amsterdam. Ultimately, we hired Semah and Blake as permanent supervisors for the new Monumental & Mixed Media department. It was still in its infancy: in the beginning we didn't even have video cameras - with money we had earned with a commercial project we could take over a few from the SKAR - of those big unwieldy things ...

John was university educated and broadly oriented, interested in literature, verbally good and able to tell well. Really a civilized person, civilized. He had a lot of knowledge, and always formulated surprising insights and references. He also had an international art practice, and acted as a guest teacher all over Europe and the US. For example, he organized a student project in Poznan / Poland, where he had contact with a colleague at the academy there. He did well with our students anyway, he felt one of them. ”

John Blake was a modest but quirky person. Among his fellow teachers he was by no means one ringleader. No matter how long in the Netherlands: he was and remained American, and one international artist. He always spoke English - he never mastered Dutch. At the time, not everyone was master of English at the Rotterdam academy, which made conversations with him difficult for some…; others, on the other hand, walked away with him.

René Verouden also experienced John Blake as a colleague. He calls Blake very involved as a teacher, although he remained somewhat in the background: “He was often silent for a long time during student work presentations, but then he came up with a good story full of sharp observations, formulated in few words, calm and precise . He brought an international perspective within the Rotterdam academy. For us, and for students, he was a walking bookcase: he knew a lot about a lot of artists, knew not only the Rotterdam scene, but also artists worldwide - he also knew many of them personally. ”

That is also the experience of Willem Besselink, who had chosen John Blake as one of his supervisors when he graduated in 2006: “I always enjoyed talking to him about my work. John did not talk to you as a teacher to a student; he made me feel like we were two artists among each other. "

Although Blake lived in Woerden, where he also had his studio, he was often found in De Schouw café on Witte de Withstraat. With a glass of white wine in his hand - he seldom drank beer - he liked to meet students and former students there. In 2006 he also made a contribution to De Aanschouw there. "A piece of work from shards of blue colored glass, a variation on a previously, but never realized project," remembers Aanschouw initiator and curator Frank Taal; “I had known him for years, and at one point he asked if he didn't agree something for De Aanschouw was allowed to make. ”That, like all other projects there, could only be seen for one week.

The ensemble is a permanent example of John Blake's working method in Rotterdam Artstop Witte de Withstraat & Neck from 2000. At that time the cultural axis Witte de Withstraat-Museumpark. The tram stop at the junction with the Westersingel was canceled by the RET in 1995. Art lovers fought for another stop on the spot. John Blake turned it into an art space. He agreed with the RET that the abri became white in there, and that in there Witte de Withstraat art stop no commercial images should come. That way you also have a good view through the glass back wall of that stop to the Museumpark, and to the Westersingel itself. Blake placed the Neck - also glossy white. It is the enlarged version of a display that Blake had seen in the window of a jewelry store. It 'looks' in the direction of the Art stop on the other side of the water, and from there the tram passengers 'looks'. Blake himself saw that neck, without head, as a sort of classic bust - whole in tune with the stately character of the Westersingel and the buildings there. In the meantime the abri has been replaced by the new RET model, and the stop is now called 'Museumpark' - but still the abri is white, and the only one without ads ... Together with the Neck a work of art: at first glance perhaps not very striking, but certainly quirky and deliberate - full of John Blake!

On 17 April 2017 John Blake died in Laren. He had been struggling with his health for a number of years, but for many his death still came unexpectedly. Many will miss him. For an overview of Blake's work you can visit website.

Guus Vreeburg is an art historian and affiliated with the Willem de Kooning Academy.