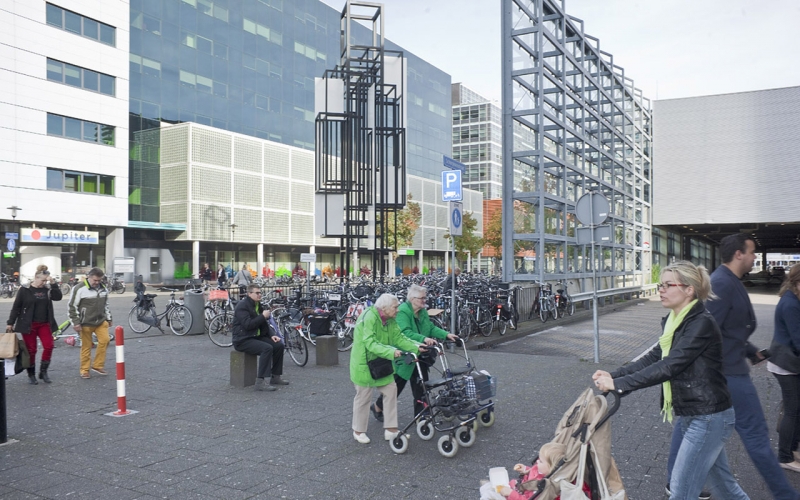 It is an honor to be here this afternoon on behalf of the Center for Visual Arts Rotterdam to relocate the artwork Space Time I by Joost Baljeu (1925 - 1991) in the borough of Prins Alexander. Never before has I been allowed to baptize such a monumental work. After all, we had our own monument, Hans Abelman, for monumental works of this caliber, but today he does wonderful work for the International Sculpture Collection.

Since 1989, the Prince Alexander district has access to one of the most striking works by Baljeu: Space Time I. In the archive of the CBK Rotterdam the object is described as a "stack of cubes with black ribs", provided with "beige rectangular plates". The material is referred to as "steel tube profile and plate". That description is similar to the bare definitions with which Spinoza shaped his philosophy: always cool, sleek, businesslike and mathematical. Nobody will be surprised that Baljeu's technology is called "constructive". Also the title that he gave to the work, Space Time I seems as geometric as it is spinozistic. After all, behind geometry, that was the premise in the 17de century, God's thoughts are hidden from before creation - or more modern, behind geometry there is only space and time. Space / Time. And it is precisely space and time, another famous philosopher said, that is essential for acquiring knowledge about our reality. Without insight into space and time, every form of knowledge, and with it progress, has died.

Just as Spinoza's mathematical argument was intended to unravel the laws of nature, so too does the constructive method of Baljeu seem to pursue a synthesis of art and nature. Natural phenomena are after all nothing more and nothing less than forces and processes that interact with each other. And it is the task of the artist, Baljeu argued, to make those forces visible in a geometric way. The artist presents himself here as a realist and utopian: a better society can only be realized if our insight into things is clear and clear - indeed, clear and clear as a mathematical formula. Space Time I testifies to that insight.

Although recent history has caught up with that utopian dream just as clearly and clearly (with culmination as the year 1989, in which the great ideologies collapsed under the same weight as the Berlin Wall fell apart), Baljeu's work still refers to that hopeful and creative episode from the history of the twentieth century. Space Time I, but also Space Time II, count as coagulations of the desire for justice; the desire for insight into the way in which reality, nature and society relate to each other. The works of Baljeu can also be called monumental in ideological terms.

If someone has to be mentioned who has made an effort to make the work of Baljeu in Rotterdam shine again in full glory, then it is Erwin van Duyn, the former portfolio holder outside space of the district of Prince Alexander. Art cannot exist without advocates and Aficionados. Space Time I unfortunately, it was oppressed by the expansion of the Oosterhof shopping center and the redesign of the Prins Alexanderplein. But luckily the work has now gained a prominent place. Van Duyn also saved Space Time II from a desolate storage shed by Eneco on the Keileweg and also brought this work to Prince Alexander. And with that, the borough suddenly has two monumental works of great significance.

Centrum Beeldende Kunst Rotterdam congratulates the borough with this fine example of public art ownership and hopes that the images of Baljeu will get the attention they deserve here. I would like to conclude with a quote from Spinoza, which I think can also be applied to the constructivist nature of Space Time I en II: "A true representation must match what it proposes".