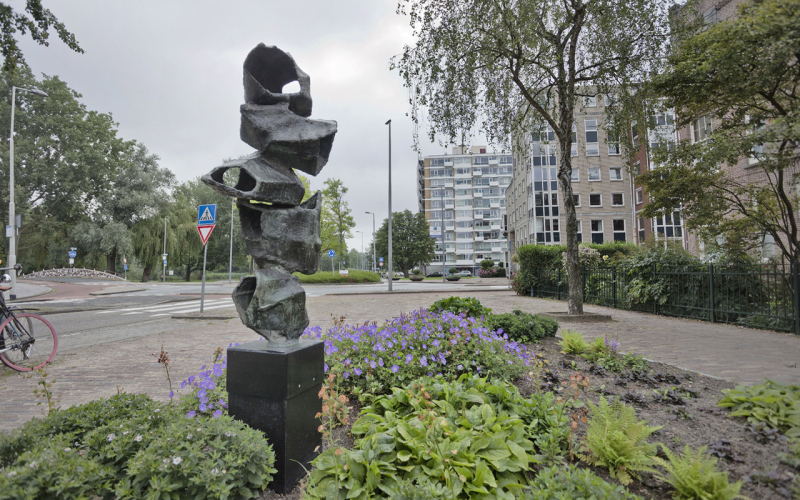 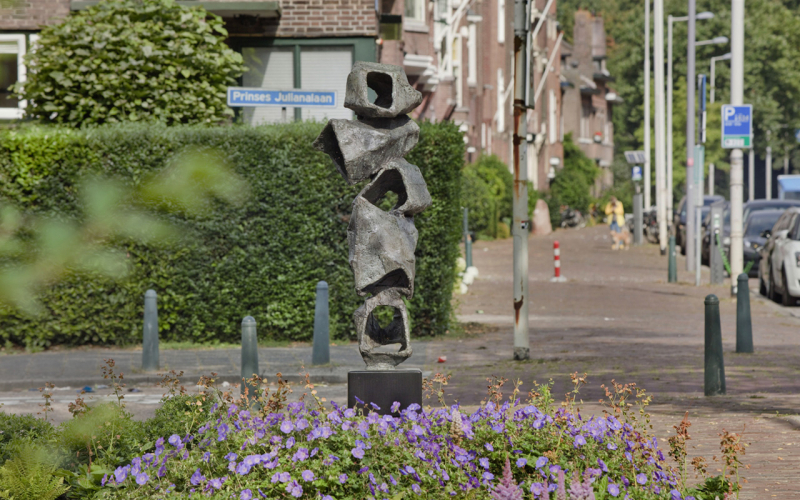 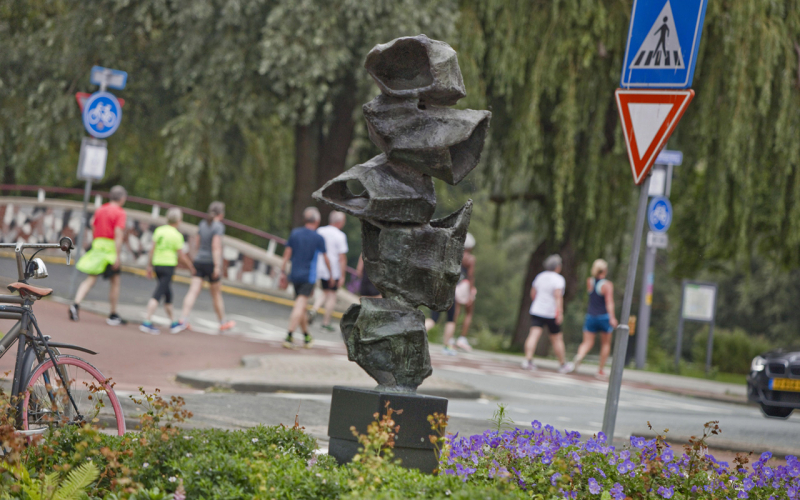 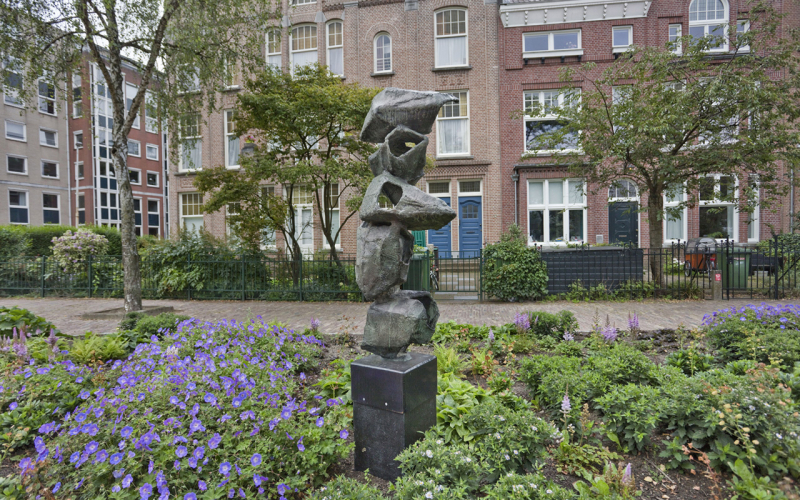 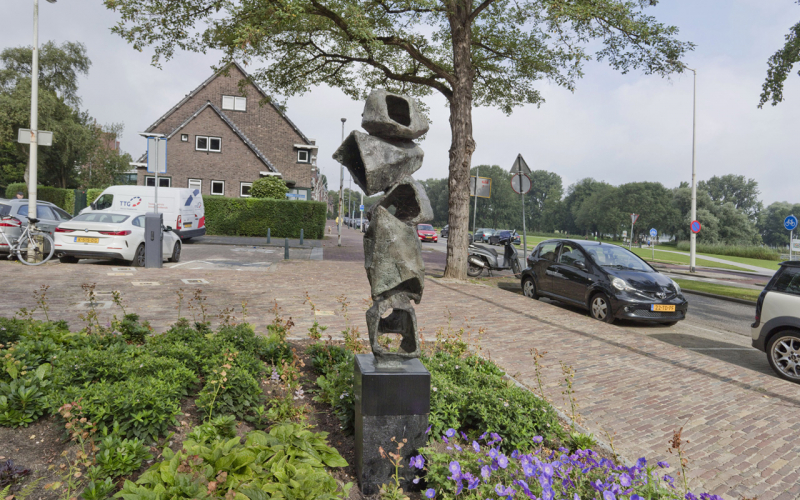 In April 2021, an abstract bronze sculpture appeared on the Kralingse Plaslaan: a stack of five hollow shapes with openings pointing in different directions. They are whimsical shapes that you cannot clearly name and that is not just for the sake of it: Spacebulbs is the title it received in 1965 from its maker, the Rotterdam sculptor Leendert Janzee (Gouda, 1940 – Rotterdam, 1972). 'Bulbs' can be translated into bulbs or flower bulbs as a kind of breeding ground for aliens, as in science fiction, a genre that flourished at the same time as space travel, which influenced design, art and fashion. Janzee's amorphous space bulbs look organic, but also contain brutally visible welds as a sign of the making process – not that of a modeling process as was common in sculpture until then, but the scars of a construction in an industrial workshop.

That reference to science fiction and space travel sounds like Pop Art, the style that then makes its appearance in Rotterdam. Janzee eagerly embraces it, in his own way. Stylistically you don't see that in this bronze sculpture, it has more the visual language of the existing abstract sculpture. That makes this sculpture a link in his oeuvre, an announcement of a new direction. In 1964 he exhibited more of these 'Spacebulbs' in Keukenhof, two years later he showed more clearly Pop Art-like sculptures at Galerie Delta, such as Fall Out Baby, of a grim mutated baby with an extra limb and gas mask.

According to the book 'Kunst in de Kijkerd', it was this image that evoked a lot of incomprehension among his neighbors in Vreewijk, who raided his studio there and caused major destruction. He moved to a studio building on the Molenwaterweg in the Provenierswijk, where Bob Kemper, Toni Burgering, Johan Zevenbergen and others also had their studios. Here too, his studio was destroyed once, in 1971. Setbacks did not prevent him from taking new steps energetically in his work. Around 1967 he started his 'furniture pieces': assemblies of wood veneer that he trimmed, gave drawers, covered with stickers and toy animals. In 1968 he made Column, a screen with an electric-looking image line that could be controlled by means of sound. The work is included in the collection of the Stedelijk Museum Amsterdam, where he exhibited as a group at the time. He was also in good artistic company with Galerie Delta, owned by gallery owner Hans Sonnenberg, who had a nose for new Pop Art talents such as Woody van Amen and Jacob Zekveld.

In the same sixties a lot was built in Rotterdam, whereby the municipality commissioned artists to provide the new neighborhoods and schoolyards with art. This reconstruction art served to brighten up a neighborhood and elevate its citizens. A percentage scheme was created for this: approximately one percent of the construction cost was reserved for art. In schools where art served a cultural education, Janzee designed four works of art for schoolyards in Ommoord and Prins Alexander in 1966-67. Three of them consisted of modular constellations of concrete prefab elements that he stacked, composed and painted in nuanced color combinations. This shows his talent for combining abstract art principles and playing wishes. The works of art functioned as play plastics and as backdrops for school photos, yet they were visibly autonomous.

Contemporaries described Janzee as an extraordinarily nice, charming man and a handsome appearance. But beneath that beautiful exterior, he struggled with serious psychological problems, allegedly caused in part by alcohol and drugs. His widow, the actress Willeke van Ammelrooy, said in 1976 that in his better years he was a radiant center of any company, but in his later days achieved just the opposite and pulled a company down. In 1972 he ended his life. Their daughter Denise Janzee made a film about her father in 1990, 'Schadembaab'.

Just as she collects memories of her father who died young, friends of Janzee also later went in search of remnants from his small oeuvre and around 2010 took one of his works of art from Prince Alexander with them. Out of love for his small oeuvre, they wanted to protect it from further decay and it ended up in a private garden. One constellation still remains in a schoolyard, albeit painted over in colors other than those intended by him.

Spacebulbs has even stood in a schoolyard for half a century, until it ended up in a municipal depot. In the 21e century, schoolyards are being redesigned according to different insights and requirements, without these kinds of works of art. It is thanks to committed residents of the Princess Julianalaan that Spacebulbs now, partly thanks to the municipal project Wijkverrijkers, it has been given a second life and can be admired again in good condition.