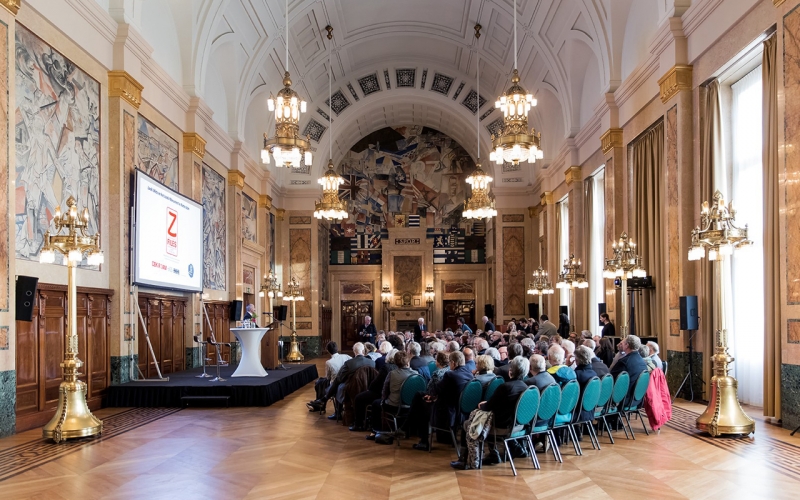 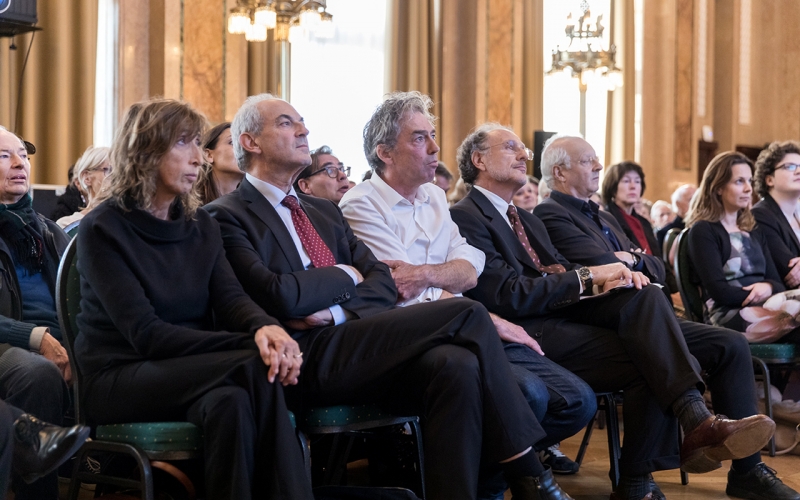 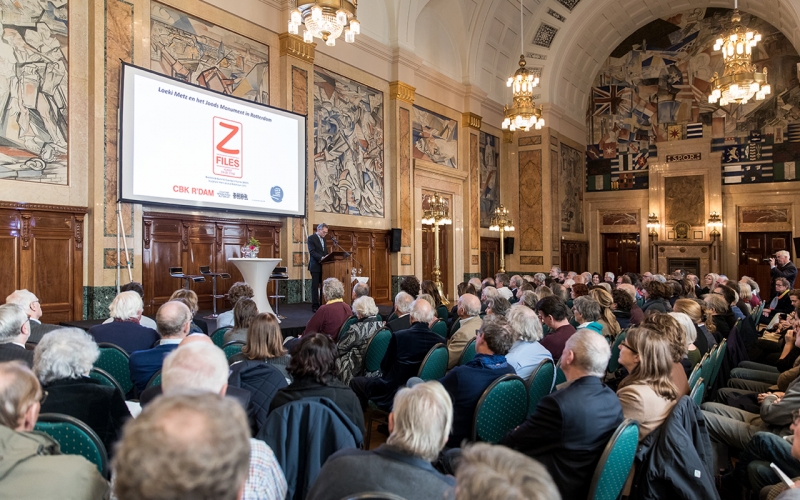 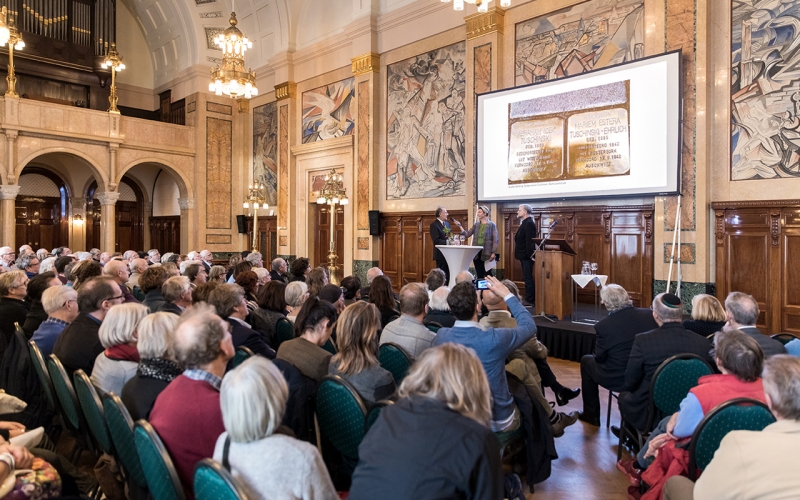 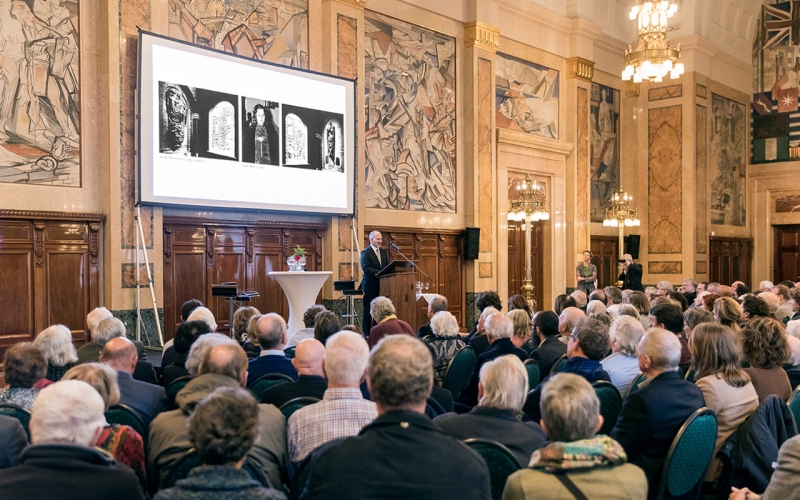 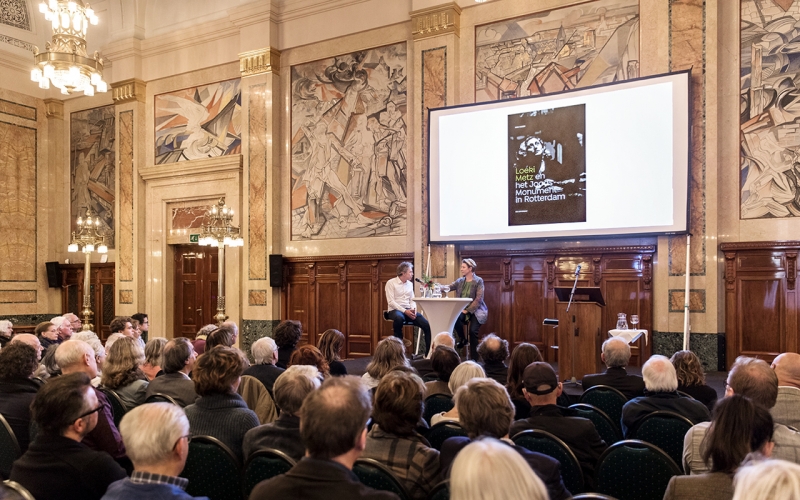 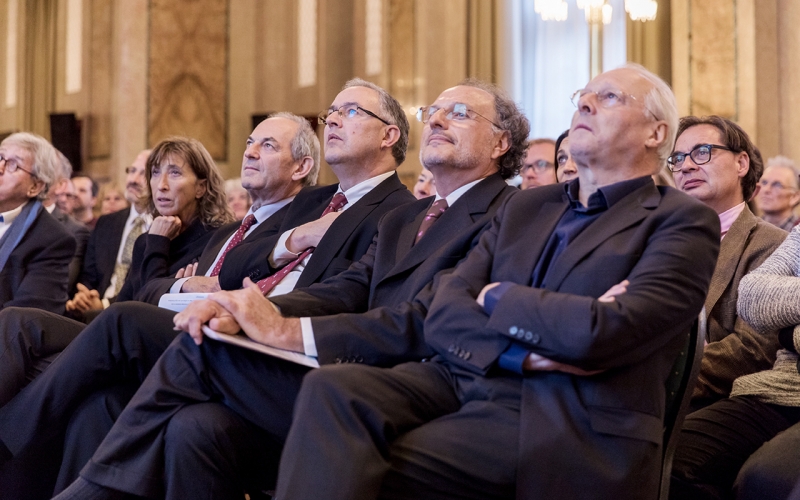 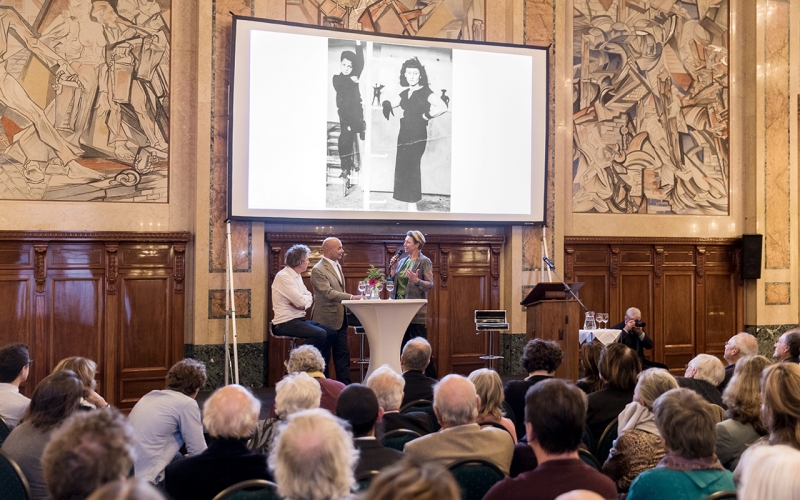 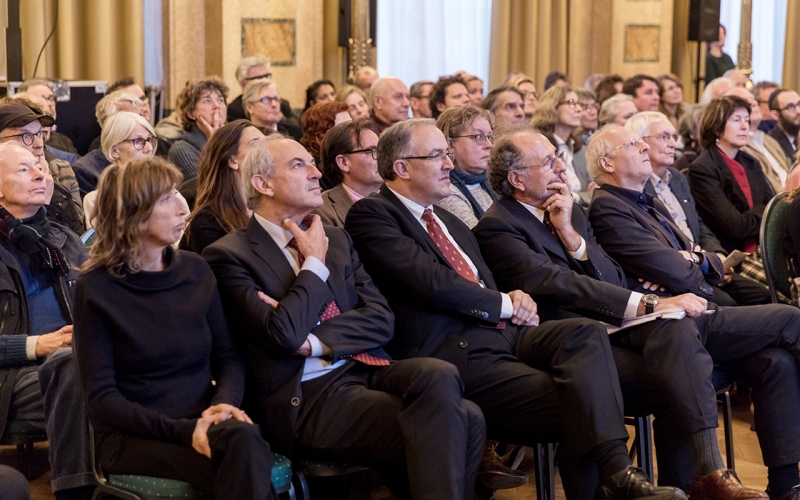 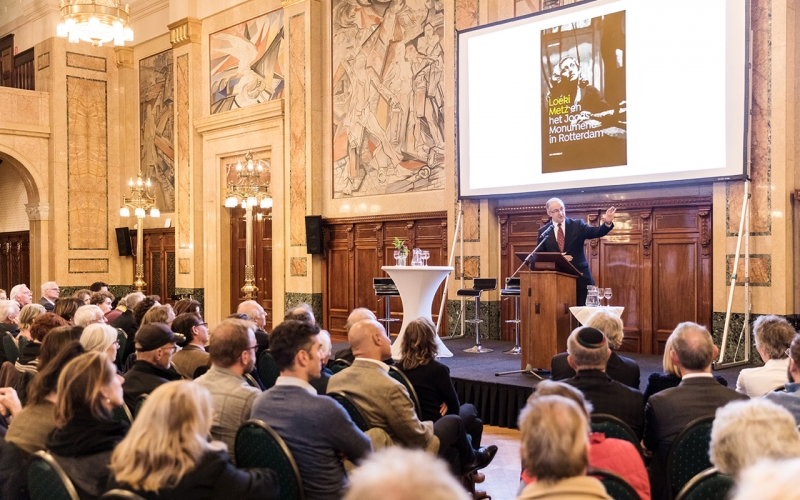 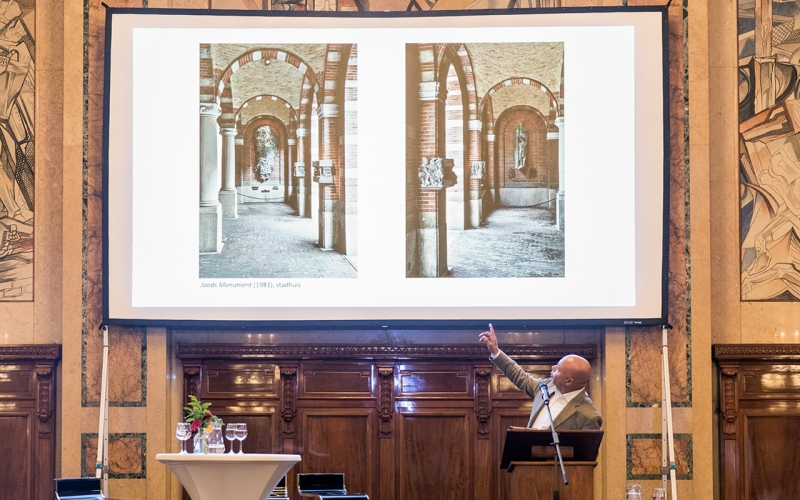 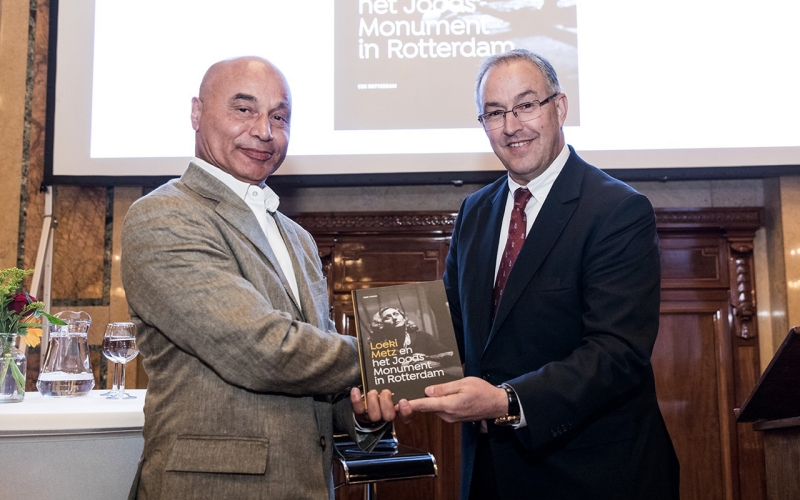 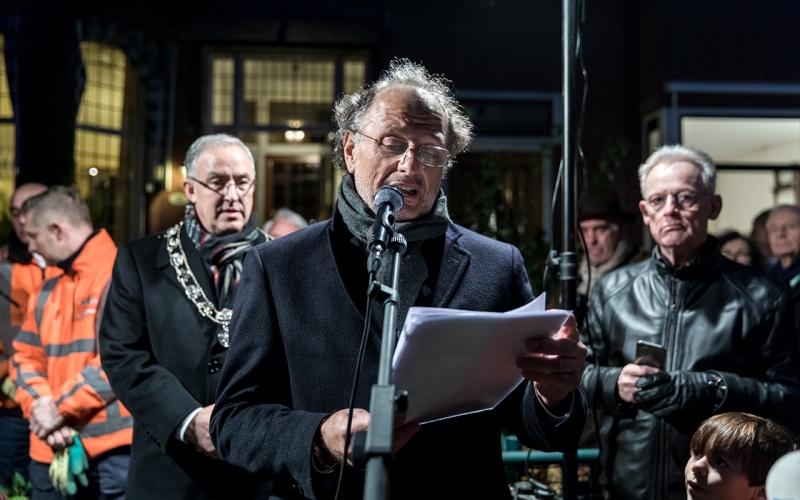 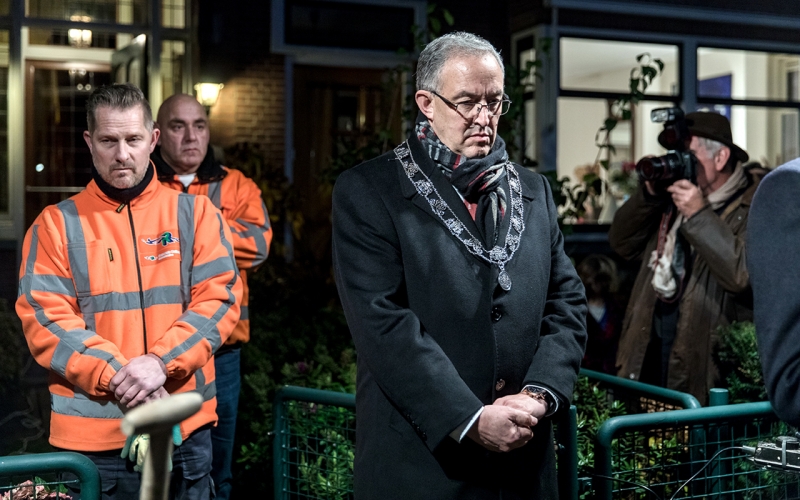 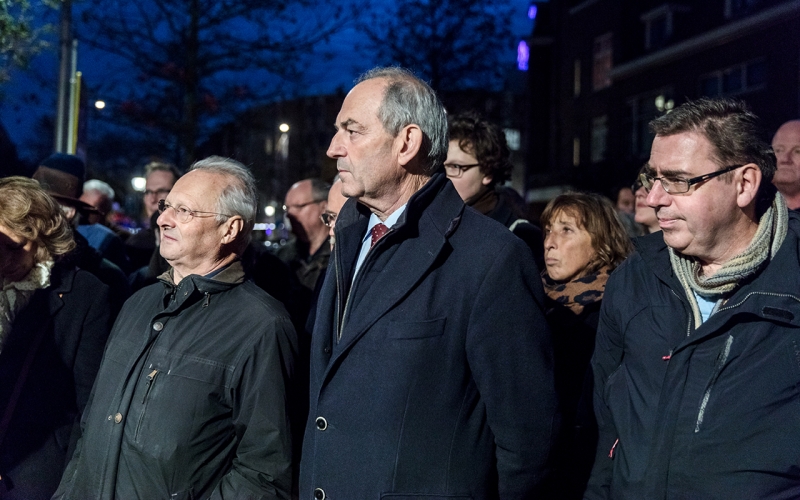 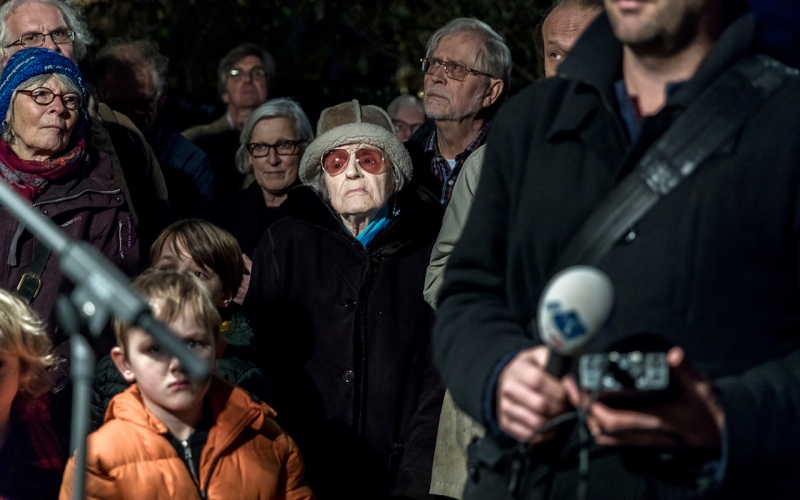 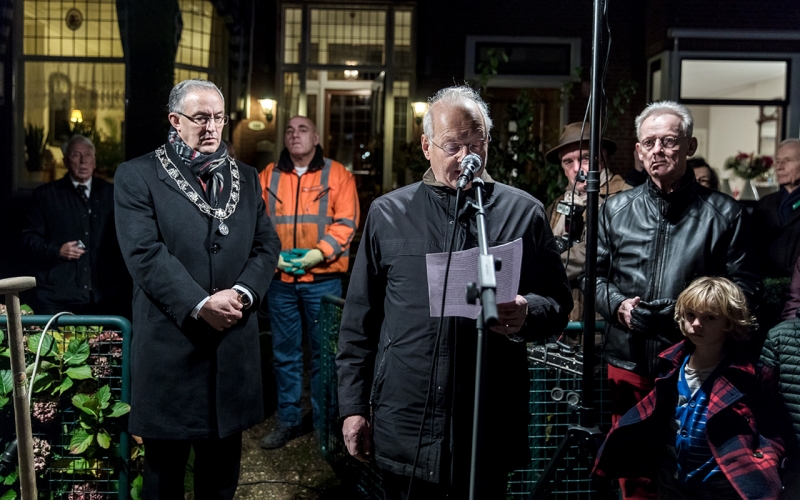 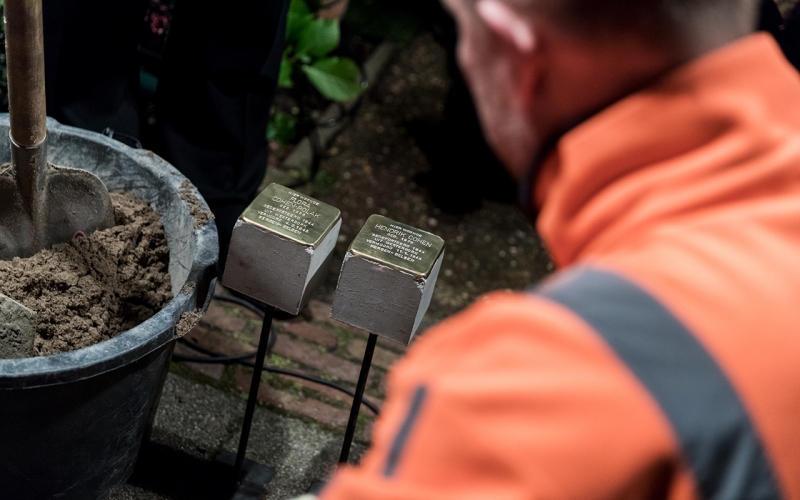 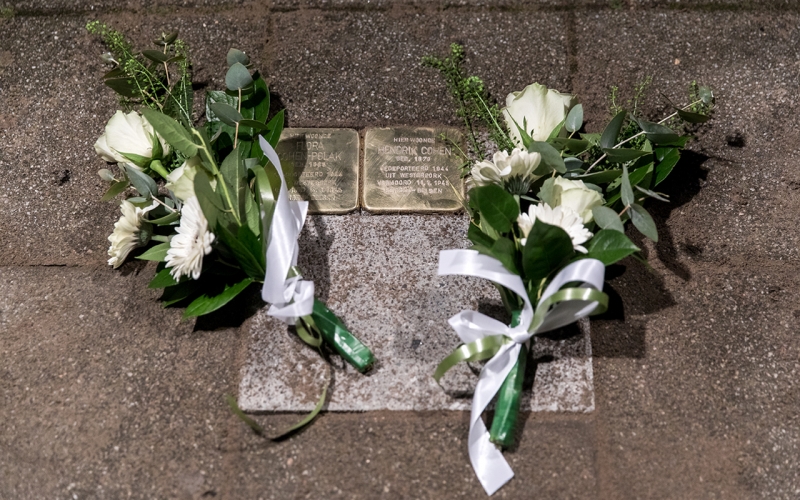 Stumbling Stones, or stumbling stones, they pop up everywhere in the Netherlands. Monday November 13, preceded by a cultural meeting, two were placed on Rozenburglaan in Rotterdam, for Hendrik and Flora Cohen, the grandparents of former mayor of Amsterdam Job Cohen.

The evening has already fallen when a distinguished group arrives at Rozenburglaan in Rotterdam. Among them Job Cohen and mayor Ahmed Aboutaleb. The company comes from the town hall, where a special meeting took place that afternoon. That became the twentieth edition Z-Files, Art and the City kept. The Z stands for Zadkine, famous for his sculpture 'The destroyed city', which expresses the suffering of the Rotterdam bombardment in the early days of the Second World War. The organization is committed to taking art in the Maasstad to a higher level. This time the meeting has a Jewish character. The afternoon will be opened with vocals by Ken Gould, known for his work, among others Art and Israel. The room is silent and this opening immediately sets the tone for the rest of the afternoon: worthy.

After Gould, Paul van de Laar enters the stage. Van de Laar is a historian and director of Museum Rotterdam. He takes the audience on a bird's-eye view of the Jewish history of Rotterdam. Surprised sounds come from the room, because Rotterdam appears to have a rich Jewish past, of which few guests were aware until then. Frank van Gelderen, secretary of Loods 24 and Jewish Children's Monument, and Rob Snijders, historian and founder of the Jewish Heritage Rotterdam website, explain why commemoration is so incredibly important. Rob Snijders says that he wants to focus not only on those who did not survive the war, but also on people who left their mark on the city and contributed to the reconstruction of Rotterdam. Frank van Gelderen is mainly inspired by his nephews and niece, who did not return from the war. He wants to maintain the memory of them and other victims.

In addition, special attention is paid to a new book by Siebe Thissen: Loeki Metz and the Jewish Monument in Rotterdam. Artist Metz designed this monument fifty years ago. The Committee of Honor Debt to Jewish Stadsgenoten tried to apologize to the Jewish residents of Rotterdam. But the day after the statue was unveiled at the synagogue on ABN Davidsplein, it was already taken off the wall and stored away. Years of frustration followed, until it was finally placed in the city hall garden. The son of Loeki Metz, Serge, tells about that history, from the perspective of his mother.

Connection with the present

Then it continues to Rozenburglaan, where Mayor Aboutaleb addresses those present, and Job Cohen in particular, before the stumbling blocks are placed. “The special thing about a Stolperstein is that it is something you can also stumble over. You have to see it, and it has to tell you something in one go: oh yes, that's what this story was about. ” In his speech Aboutaleb emphasizes the importance of commemoration, especially for a city like Rotterdam, where 11.000 people were killed, the city that was so badly damaged by the bombing.

Aboutaleb makes a connection with the present when he emphasizes that while the horrors of the Holocaust are over, “human rights violations still occur; that mass murders still take place. That people are still starving for reasons of political violence, are being moved, are being expelled, and that where it was once said in the Netherlands 'never again Auschwitz', unfortunately in many countries there are still stories that are not exactly the same, but there are somewhat resemble. That humanity apparently quickly forgets and does not always remember to translate history into the present. That is why I think it is a nice gesture to add Stumbling Stones, be present and witness at this place; said Aboutaleb.

Hidden in the openness

Floris Cohen, Job Cohen's brother, also gives a short speech. Cohen talks about the lives of his grandparents. He appoints, among other things, the Rotterdam Jewish Council, of which his grandfather Hendrik Cohen was a member during the war. He speaks about the Jewish group feeling: “Unshakeable group feelings, firmly professed and experienced group identities do offer security, but only inwardly. There is a struggle to the outside. ” Floris Cohen, like Mayor Aboutaleb, makes a connection with the present. It is strategically positioned, with on one side the first Muslim mayor of Rotterdam and on the other his brother Job, who was the third Jewish mayor of Amsterdam. With this Floris wants to make it clear that we can now and hopefully also in the future decide for ourselves what we do and do not belong to.

The small brass stumbling stones, hidden in the open, tell the stories of victims from the Second World War, also on Rozenburglaan number 100. The stones are laid by Ron and Ron, who have placed all the stumbling stones in Rotterdam. They are the permanent team of Rotterdam municipal works, which deals with the project. With the recently placed stones there are 291 in the city. These days, the stumbling stones are attached with wire ends and a piece of metal. This has become necessary after three were stolen early last year. But the placement continues so that it is not forgotten.