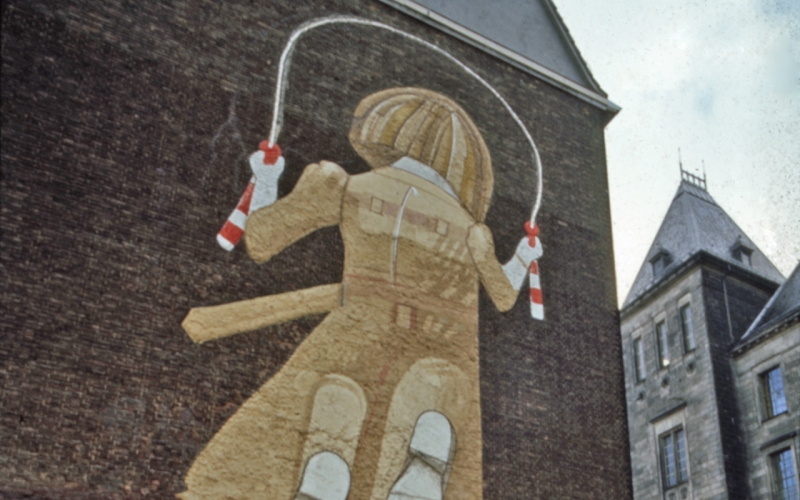 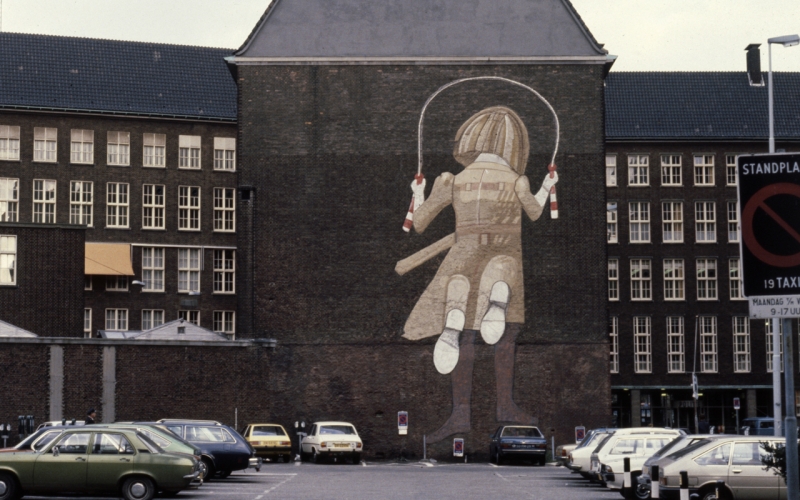 In memory of the deceased artist Co Westerik (1924-2018), family members, Stichting Droom en Daad, Municipality of Rotterdam and CBK Rotterdam recently made an appeal to all Rotterdammers: who has a suitable wall for the relocation of the artwork demolished in 1988 Jumping girl? It had to become a striking, visible place in the city and the wall had to be made of bricks. From dozens of submissions a jury, consisting of Ernest van der Kwast, Siebe Thissen and Wim Pijbes, chose a location that all parties are enthusiastic about.

The work will be applied to the brick wall of the Ooghuis, part of the Rotterdam Eye Hospital on the corner Blekerstraat-Schiedamse Vest. “The area around the Eye Hospital is a center of change and densification. The population of the Cool district around the busy Witte de Withstraat will double in the coming years. In that new Rotterdam, the girl from Co Westerik becomes a monumental work of considerable size. For newcomers a first introduction to visual art on the street; a feast of recognition for older people in Rotterdam ”, said Siebe Thissen, CBK Rotterdam.

The famous wall relief from 1976, designed for the blank wall of the old police station on the Haagseveer, was knocked down by a demolition bullet in October 1988. A sad moment for many people in Rotterdam. Numerous attempts were made to return the work of art, but Co Westerik accepted the demise of his work: "It has never been a work of art for eternity. "

Reconstruction
The work consisted of an ingenious relief, consisting of cement mixed with pigments, which was painted by hand. That is why the 'girl' was much more than just a mural. Thanks to the dynamics of form and color, the image was able to anchor itself strongly in the cultural memory of the Rotterdammer.

Co Westerik did everything himself. A technical team, led by son Willem Westerik, will be working on the implementation in the coming months. That appears to be an almost archaeological challenge: because how did Co Westerik make his relief? The aim is a careful reconstruction that approximates the original as closely as possible. After completion of the investigation, it will be determined when the work can start.

Willem Westerik:
“Is a better homage conceivable than the return of it Jumping girl in Rotterdam? After the fantastic retrospective exhibition at Museum Boijmans Van Beuningen, there will be an exhibition in London this fall. In addition, we will soon be publishing all his work journals, which provide a detailed insight into the working methods of my father and his artistry. He lives on like this, on Blekerstraat and far beyond. "

Co Westerik in his journal on Queen's Day 1976:
“Coolsingel: the Haagseveer. The ridges and bites in the unfinished concrete slab gave a strong drop shadow at 12 hour 30. Given that 20 cm concrete relief (according to the contractor as far as I can go in thickness) will have a very pretty 'drawing' shadow effect. ”

The Rotterdam Eye Hospital:
“Art is very important for Het Oogziekenhuis. Art is used within the hospital to distract patients from the thoughts of treatment. We are very happy that with the placement of the work of Co Westerik we can mean something for the city. ”

Wim Pijbes, director Stichting Droom en Daad:
“It was for years Jumping girl van Co Westerik the most beloved façade artwork in the Netherlands. It is fantastic that this iconic image is now given a new life. "