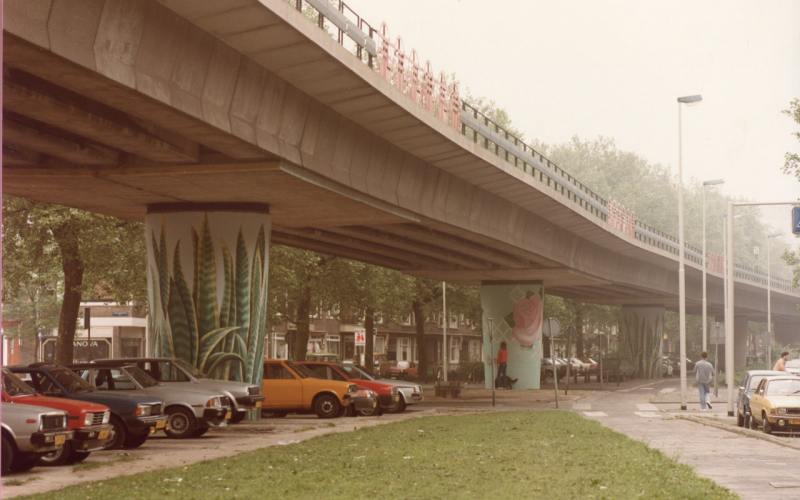 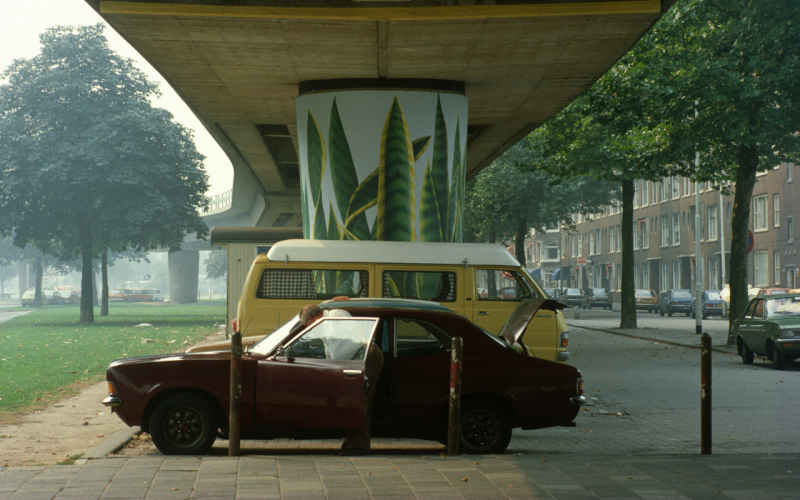 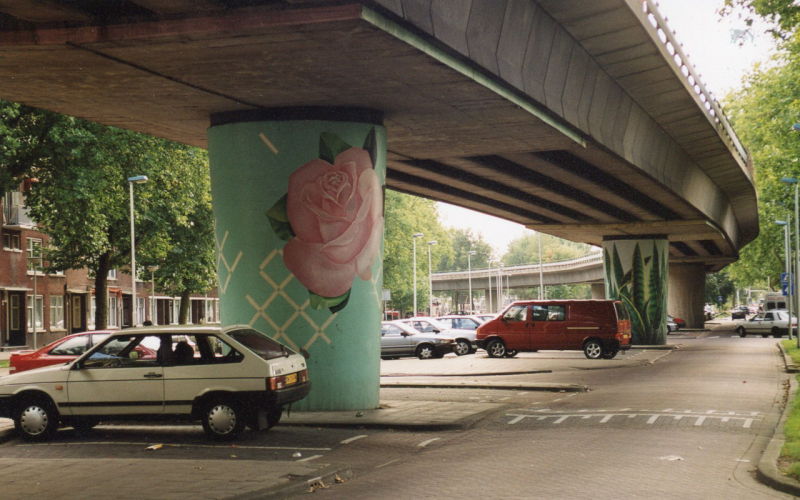 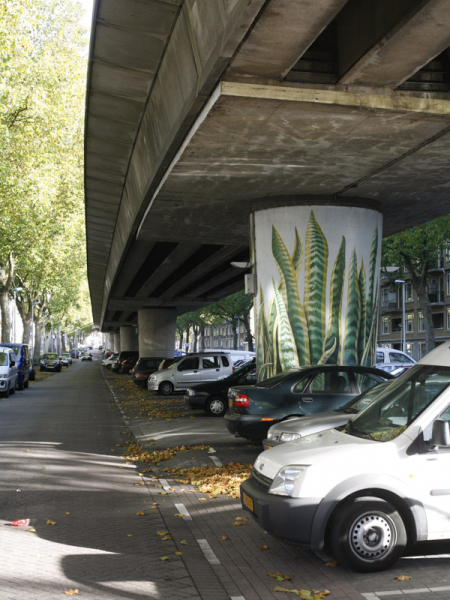 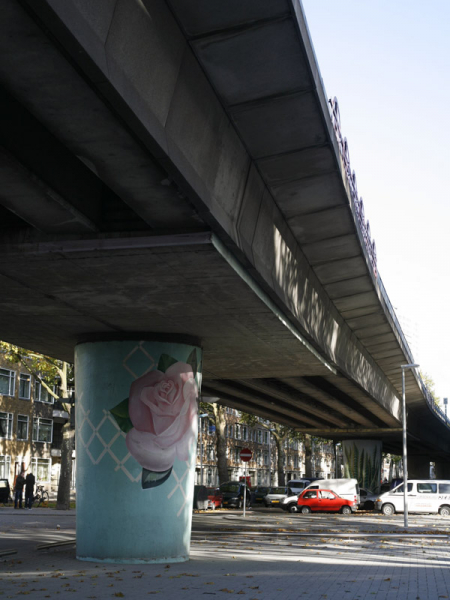 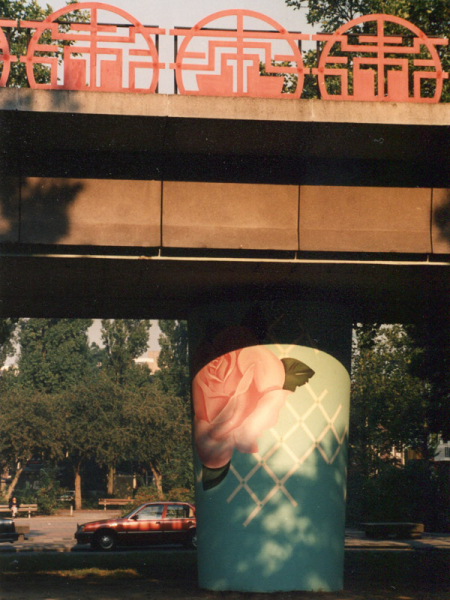 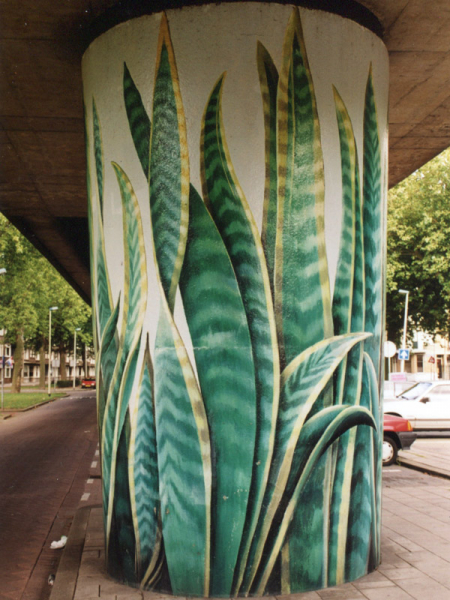 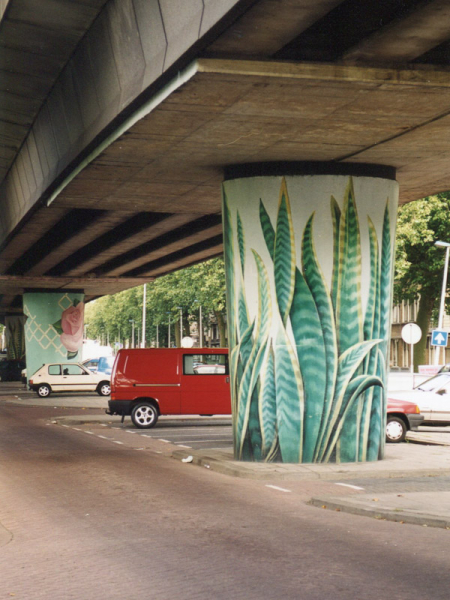 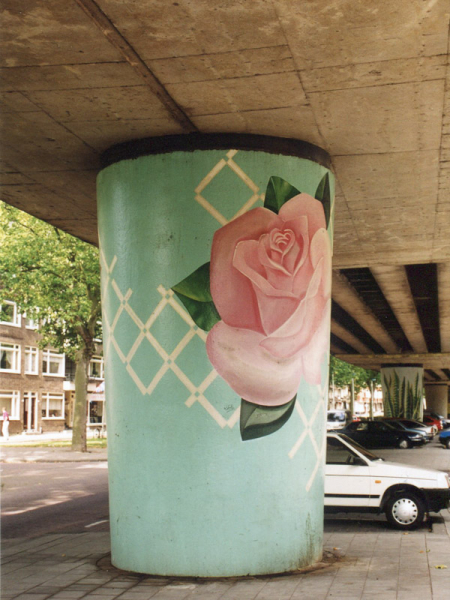 At the end of the 1970s, a number of artists were fed up with the monotonous drabness of Rotterdam and started an offensive with a lot of color. Artists were commissioned by the Rotterdam Art Foundation (RKS) to create large colorful paintings in public space. This project was called Townpainting. One of these commissions went to visual artist Henk Tas and Willem van Drunen in 1977. They were allowed to make a design for the metro viaduct between the stations Maashaven and Zuidplein. Tas and Van Drunen painted green sanseveria plants on two of the columns. Roses were painted on the middle column. Above each painted column, a red fence ornament hangs on either side of the metro track, marking the whole as it were.

Henk Tas (Rotterdam, 1948) is a sculptor, photographer, graphic artist and wall painter. He studied at the Academy of Visual Arts in Rotterdam from 1966 to 1972 in the direction of free drawing and painting. Tas is inspired by pop culture. IN 1972 he was nominated for the Threshold Prize. In 1991 he was awarded the Erfurth Prize. His works are included in collections of, among others, Museum Boijmans van Beuningen, Rijksmuseum, Stedelijk Museum Amsterdam, Groninger Museum and Center Pompidou in Paris.

Willem van Drunen (Schwäbisch Gmünd, 1947) is a sculptor and wall painter. He was born in the south of Germany but moved to the Netherlands at an early age. He studied at the Academy of Visual Arts in Rotterdam and then established himself as a visual artist in Rotterdam. From 1979 to 1992, Van Drunen formed the artist collective Kunst & Vaarwerk together with Hans Citroen and Cor Kraat.