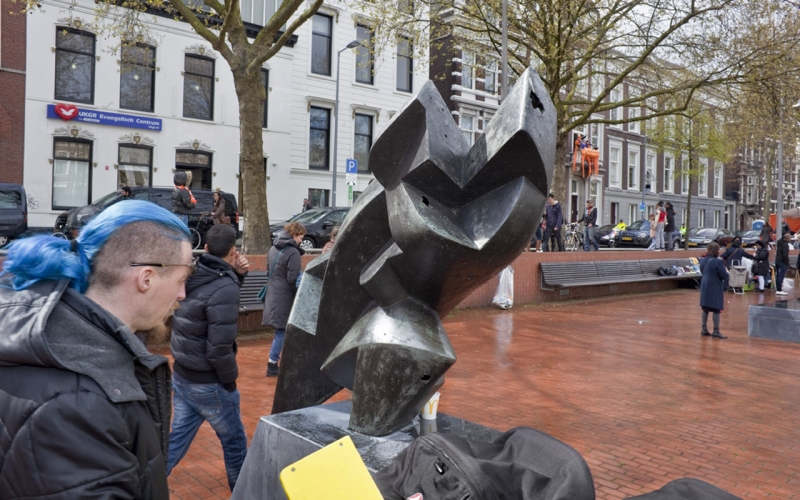 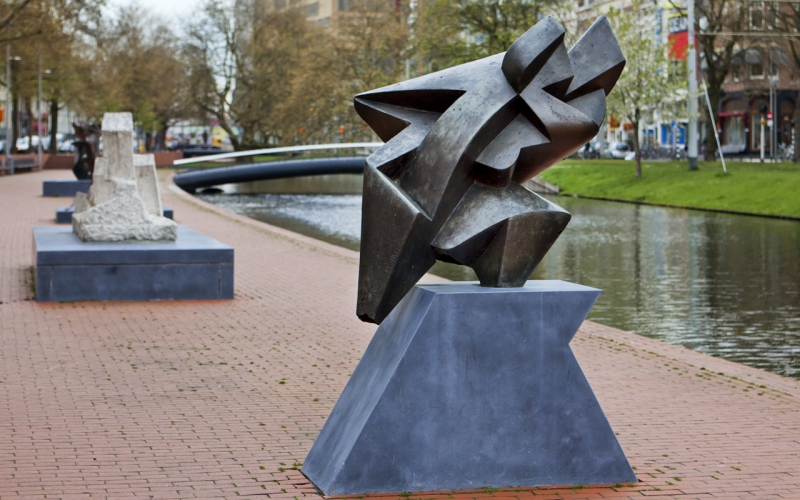 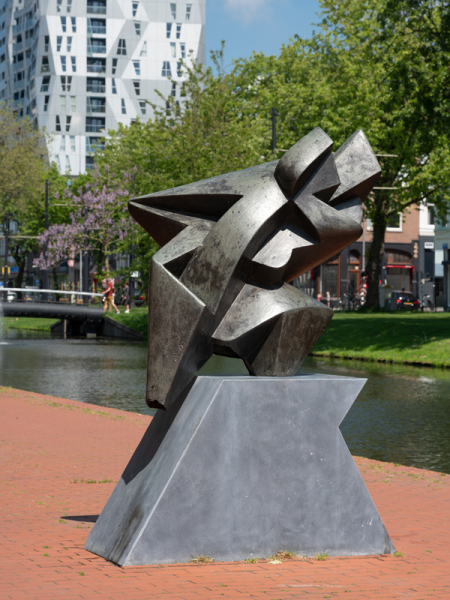 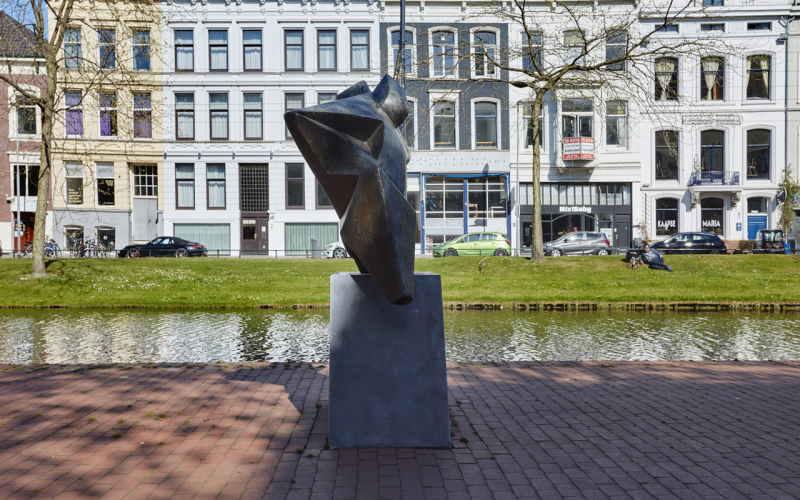 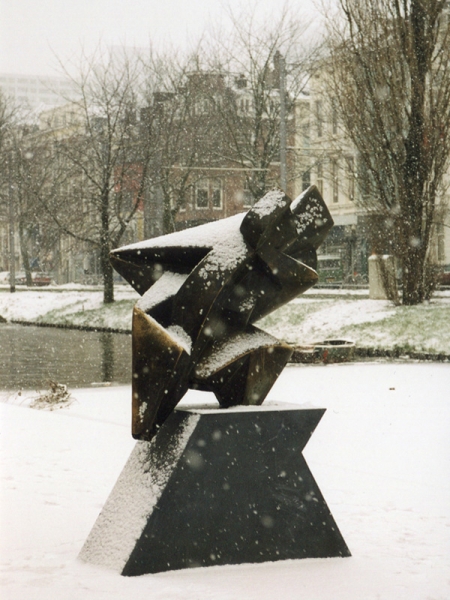 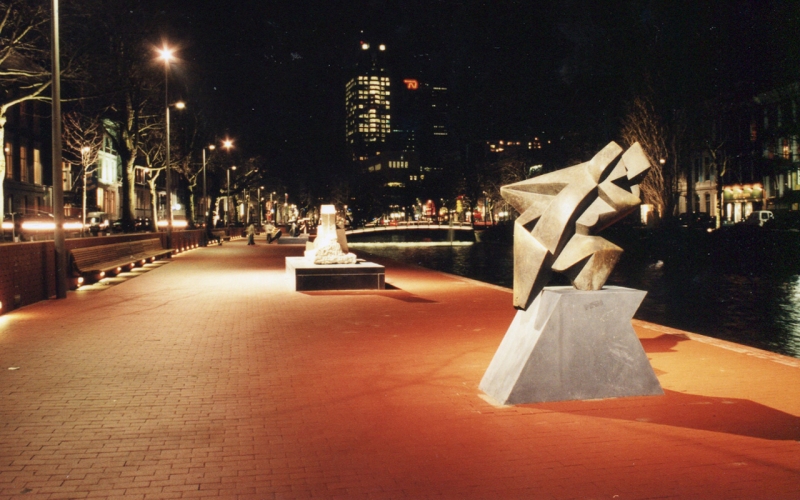 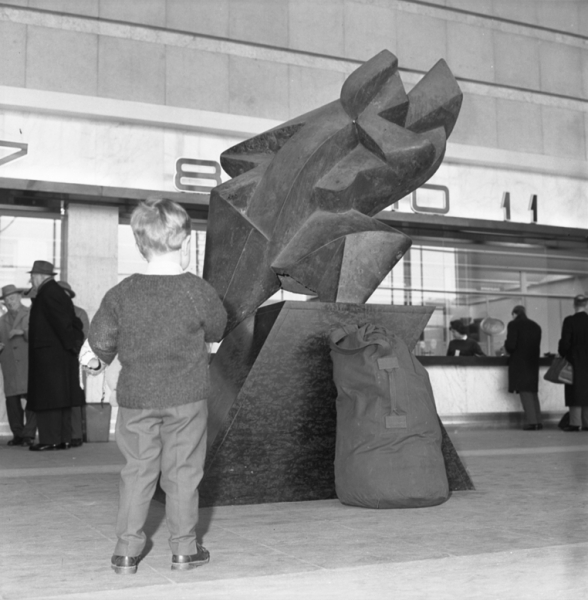 This work by sculptor Umberto Mastroianni originally stood in the hall of the former Central Station. It is a gift from the Rotterdam city council to the Dutch Railways 'as a lasting reminder of the gratitude of the municipality and the citizenry for the realization of the new station building'. It was presented to the management of the Dutch Railways by Mayor Van Walsum on Construction Day, 2 May 1957, during the official opening of the not yet completed Central Station. The then new station was designed by Sybold van Ravesteyn, the 'house architect' of the Dutch Railways. He was closely involved in the choice of the statue for the station hall. The original title of the picture was Gli Amanti, either The lovers. But in the prudish fifties people thought Goodbye more in place. In order to strengthen the sculpture terrace on the Westersingel in 2000-2001, the Dutch Railways gave up the sculpture for a longer period of time, pending the current Central Station. The image is made up of two abstracted people, who have merged into a compact mass. As a result, it fits in with the human figure theme of the sculpture terrace. If you look closely, you will recognize legs, torsos, arms and heads in the image. A wide-armed cross is recognizable as a basic shape at the back of the image. The swirling pair of figures reflects the dynamics of Cubism and Futurism, (Italian) art movements at the beginning of the twentieth century. In the 1949s Mastroianni made human images, which can be traced back to these two movements. The diagonal shapes are continued in the base. Mastroianni worked with a natural motif. During the Second World War he made classical busts and portraits. After the war he depicted natural subjects in such a way that the result was highly abstract. An example of this is the representation of a cloud in XNUMX. For more information: Sculpture International Rotterdam.

The Italian Umberto Mastroianni (Fontana Liri, 1910 - Marino, 1998) studied sculpture and made sculptures in bronze and natural stone, later in his career also graphic work. Mastroianni initially made busts and portraits in classical style. New ideas about visual art, introduced by Italian futurists around 1910 and settled with old traditions, passed him by. From 1941 onwards his work became more and more abstract, not only his visual language, but also his subjects, such as a cloud. In the 1950s he received international recognition, such as participation in the Venice Biennale and exhibitions in the US. Going back to early cubism and futurism, the human aspect of his figures continued to play a major role. In the sixties, the appearance of his sculptures became more erratic and the solid, plastic forms gave way to a more openwork structure.