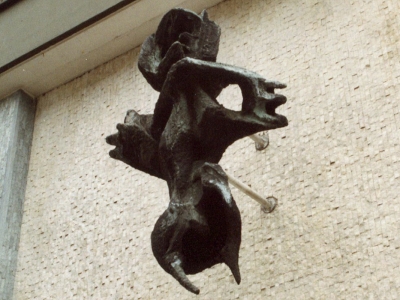 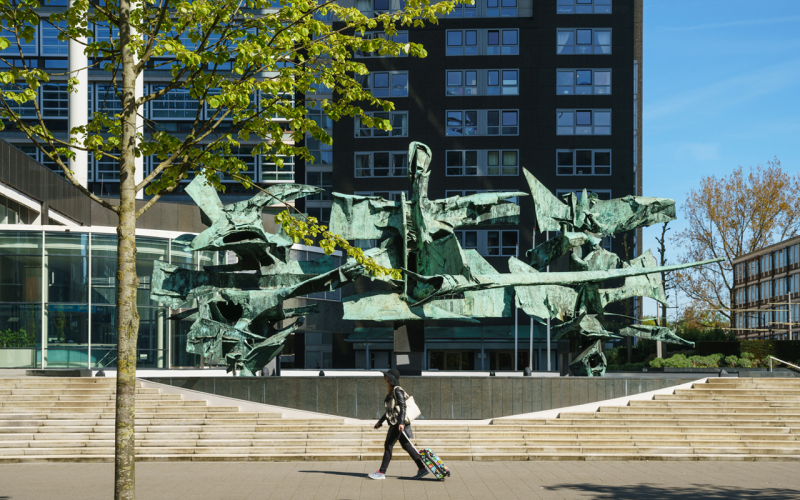 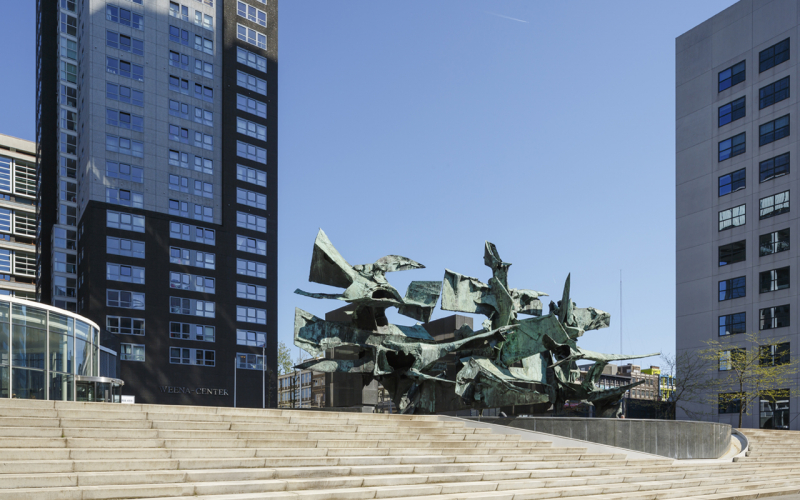 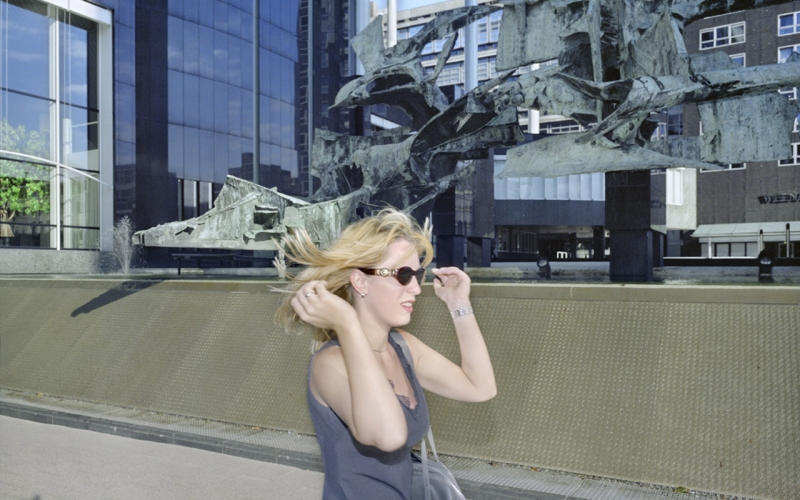 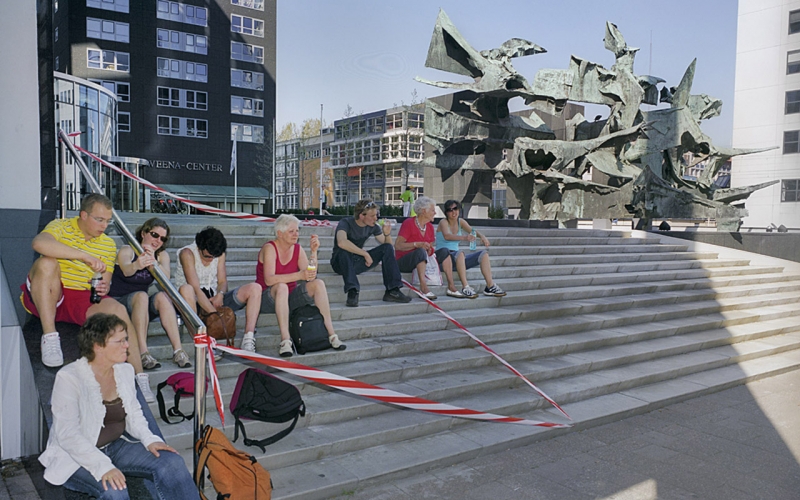 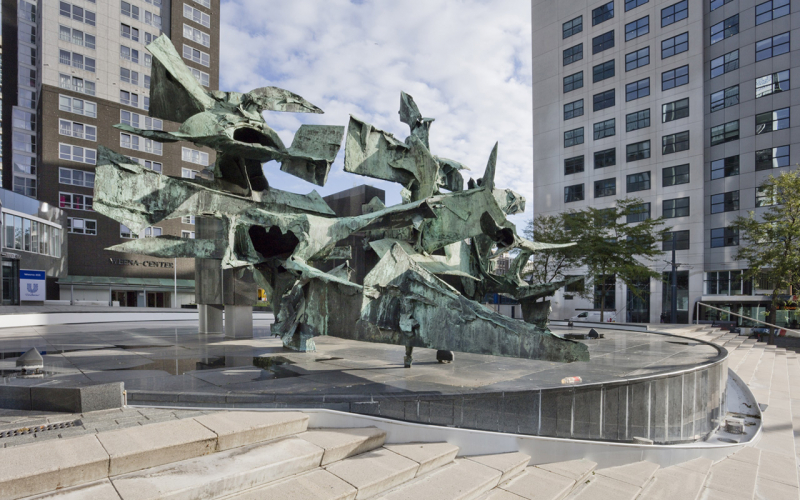 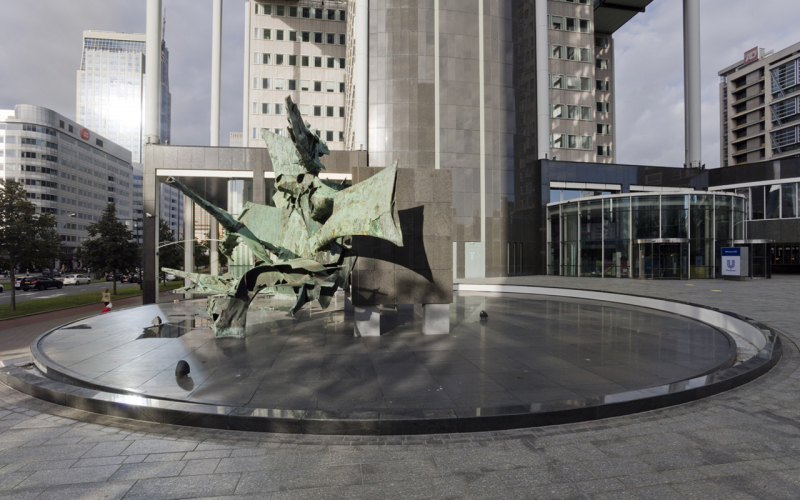 In 1958 Unilever management asked Couzijn to produce a statue. The client believed that the spatial effect of the austere architecture could be considerably strengthened by creating a contrast. This was the reason to commission Couzijn to design a dynamic, free-standing, monumental sculpture for the building, without an imposed artistic program. Couzijn designed an abstract image with a three-part structure. In the middle a human figure with wing-like limbs is recognizable, which rises above two side parts. This motif of an 'Icarus' (used more often by Couzijn) represents the human entrepreneurial spirit that tries to transcend the limitations of everyday life. Couzijn wanted to give shape to the person acting, who creates order from above in a complex organizational structure. The original title was The Manipulator, but Unilever experienced this as too negative. The image was given the name Corporate Entity. The statue weighs 18.000 kilos and was produced in 3 1/2 years. The color also contributes to the dramatic power of the image. At Couzijn's request, the bronze caster mixed a special bronze alloy with ninety-six percent red copper in it, so that the surface would turn green as quickly as possible.
There is still speculation about the meaning of the image. It speaks of 'embodiment of corporate unity' (hence the mistranslation of the title Embodied unit), but also of 'an indictment of the position of power of the multinational'. It is probably the largest bronze sculpture ever cast in the Netherlands. Couzijn worked with assistants to make a life-size casting model from sheets of perspex and wax. In 1963 the statue was unveiled at the office building on Burgemeester s'Jacobsplein. In 1992 the statue was moved to Unilever's new headquarters at Weena. For more information: Sculpture International Rotterdam.

Wessel Couzijn (Amsterdam, 1912 - Haarlem, 1984) was educated at the National Academy of Visual Arts in Amsterdam, where he was taught by Prof. Jan Bronner. Shortly after graduating in 1936, he won the Prix de Rome. In 1940 he fled to New York. In the XNUMXs he became known nationally and internationally. Two sculptures by his hand can be found in Rotterdam, namely Corporate Entity to the Weena and the work Courier on the case of the Slaakhuys near Oostplein.