Joke Gerritsen, The poem is a message (Rotterdam, 1988)

The poem is a message (1988) Het Rotterdams Kunstgesticht 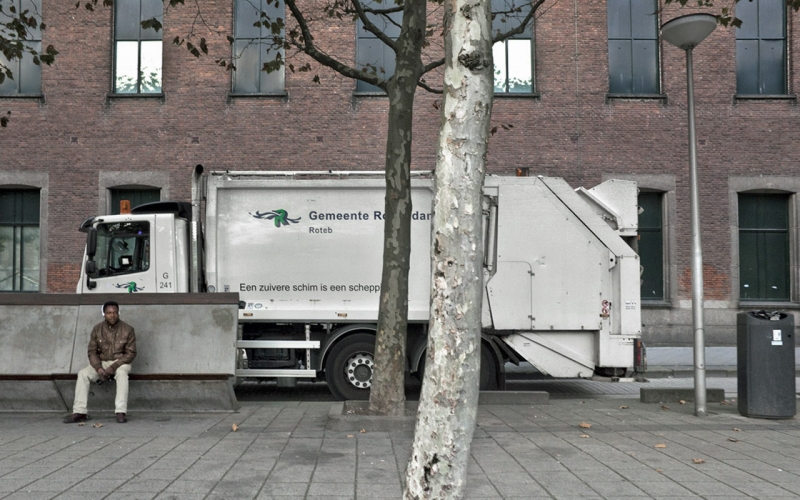 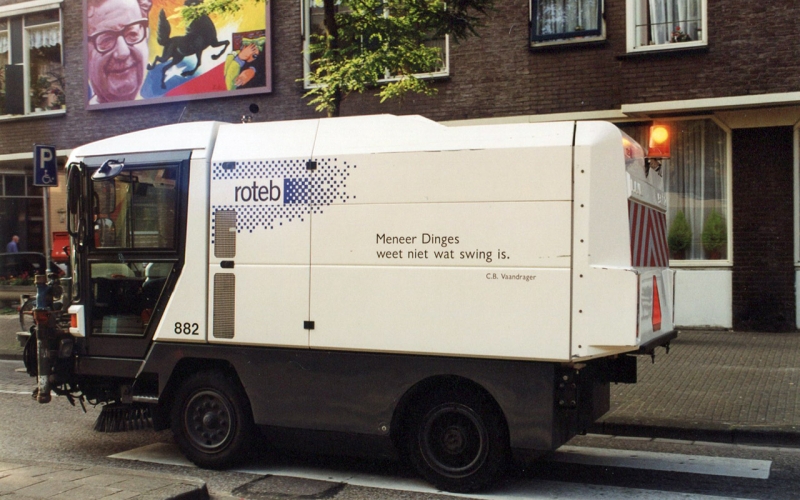 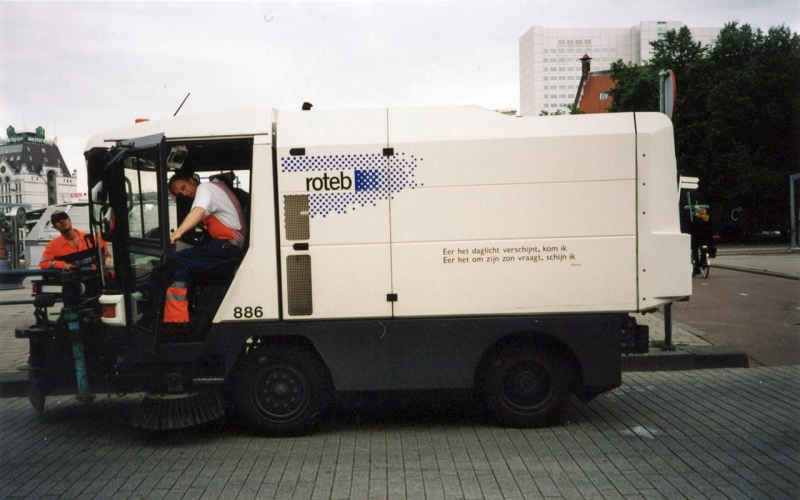 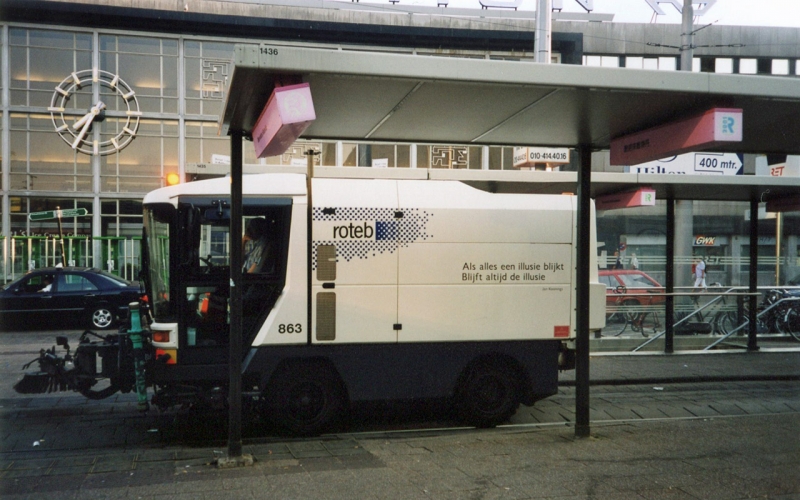 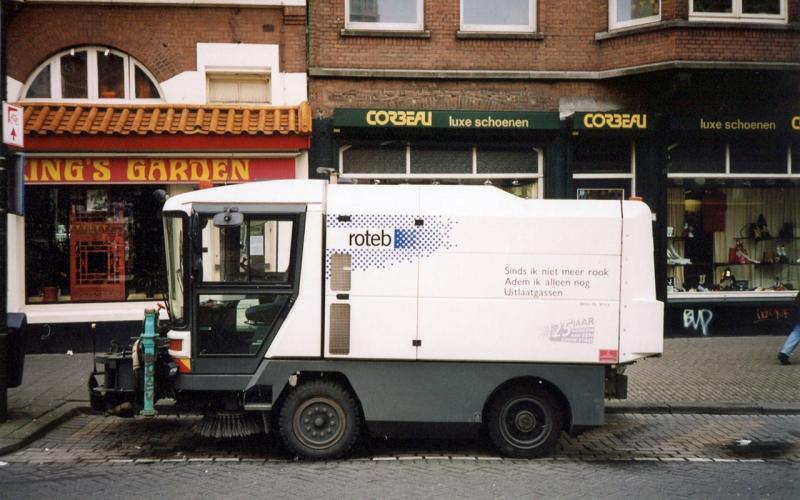 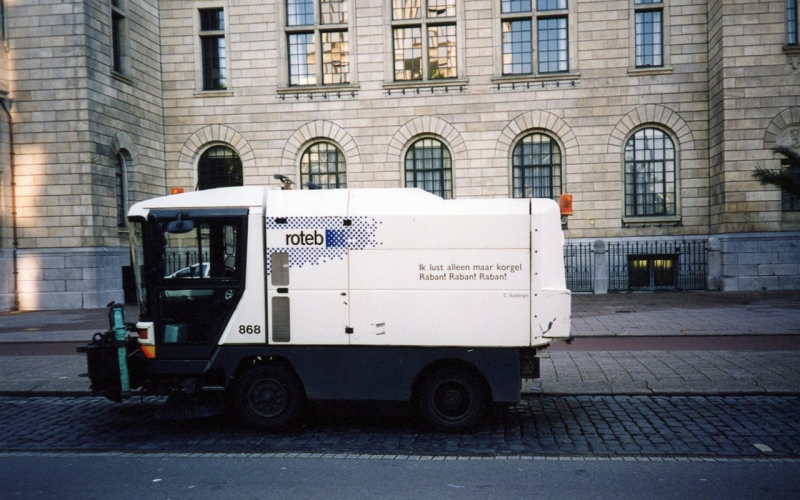 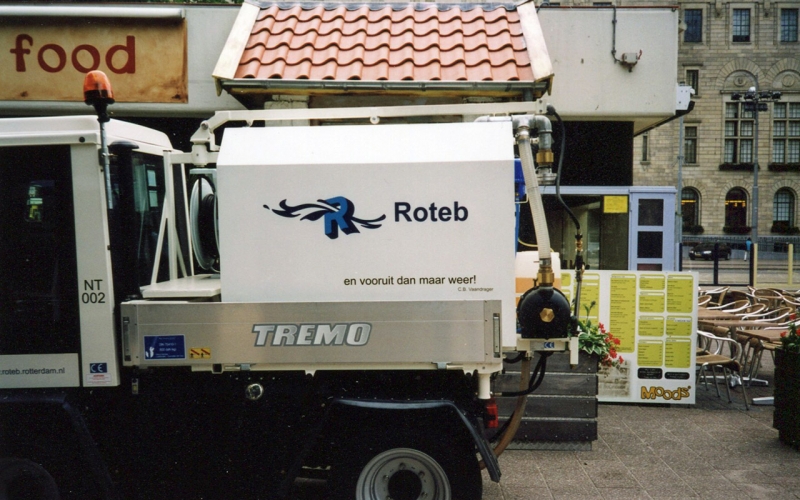 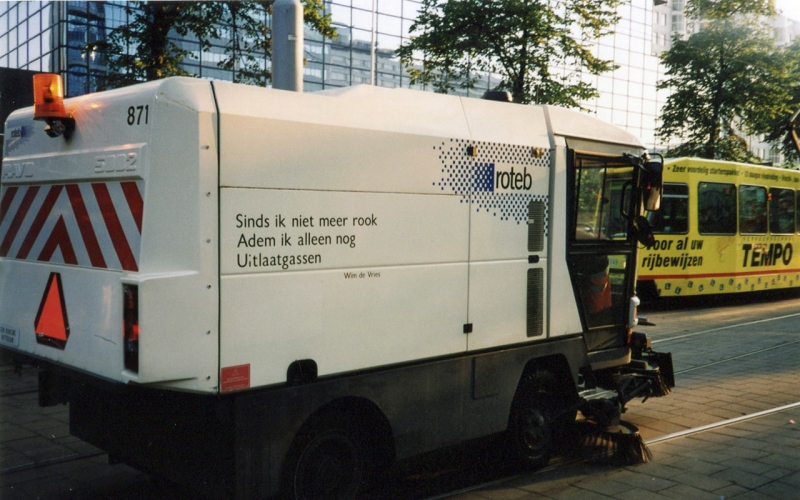 Rotterdam has a number of remarkable initiatives in the field of poetry and visual arts. Artists are regularly called in to design a poetry rule and, for example, they contribute to the visualization of poems. The line of poetry Everything of value is defenseless van Lucebert has had a prominent place on the Blaak high above the city bustle since 1978. Seen from the moon, we are all the same size is the text placed above a meter-high portrait of Multatuli on a panel painted by the Rotterdam artist Mathieu Ficheroux, which hangs in the Van Oldenbarneveltstraat. Another remarkable initiative was an idea from Hans Abelman, then head of BKOR at CBK Rotterdam. His idea was to provide Rotterdam garbage trucks with a poetry line. Poetry that is not in a static location, but can be transported to every corner of Rotterdam. A greater contrast seemed unthinkable; the garbage truck with a poetry line. Poetry in the form of just one line and with an appearance that at least does not inspire people for poetry, but which teaches people to love poetry. The project owes its name The poem is a message to the line from the poem of the same name by Jules Deelder, which was placed in 1988 as one of the first lines on a garbage truck. The idea was discussed with Martin Mooij. At the time he was director of Poetry International and they had contacts with poets and had their poems. The idea was received with much approval. A first meeting with the management of the Roteb led to great enthusiasm and many discussions at all levels within the service. Opponents were convinced and Het Rotterdams Kunstgesticht was called in to further develop and shape the idea. The initiative was brought to life by means of drawings, texts and models. Special exhibitions on the subject stimulated discussion among the Roteb's staff. In direct collaboration with Poetry International, lines of poetry were selected and the performance could start. In a very unusual way, both Roteb and poets contribute to the quality of public space. On January 27, 1988, the Roteb got twelve new garbage trucks, which were provided with a line of poetry. At the same time, a new logo was unveiled to make the municipal cleaning service even more recognizable. Transfer and unveiling became a big spectacle with a helicopter and fireworks and a few hundred people along the side and many on the roof of the Roteb building. The project has become such a success that in 2013, on the occasion of the 25-year collaboration between Poetry International and Stadsbeheer (Roteb was merged into Stadsbeheer of the Municipality of Rotterdam), it was decided to equip almost all of Stadsbeheer's cars with lines of poetry. In addition, on November 14, 2013, the neon poem rule became Cities do not hide when it rains on the Stadsbeheer building on Kleinpolderplein. An anniversary bundle has also been made with a special overview of twenty-five years The poem is a message. In total, more than three hundred lines of renowned national and foreign poets drive through Rotterdam. The lines of poetry often come from the annual Poetry International Festival, one of the most famous meeting places for poets and poetry lovers in the world. As of October 19, 2016, the project has been adopted by the German city of Frankfurt under the title Müll & Poesie. This makes Frankfurt the second city in the world after Rotterdam to combine poetry with waste in this way and bring it into public space.

The Rotterdams Kunstgesticht was a collective of four visual artists in the late 80s: Michiel Brink, Corinne Boureau, Véronique Declercq and Gerard Immerzaal. They all had their own individual professional practice, but in this collective they mainly worked together on productions of edited art. The Kunstgesticht had a graphic workshop. The first step towards expanding activities beyond the production of booklets and prints was formed by the commission for the lines of poetry on the wagons of the Roteb.