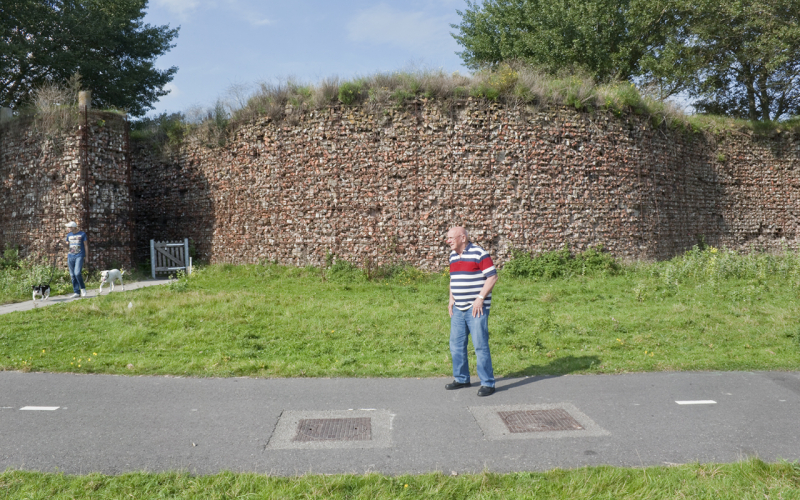 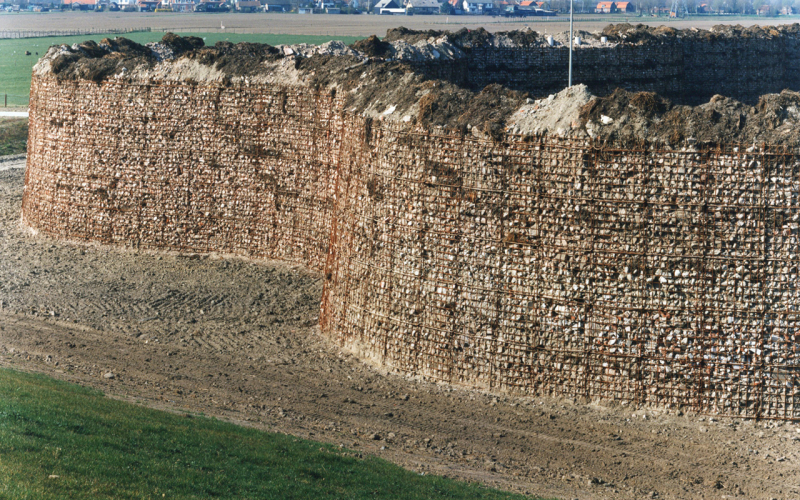 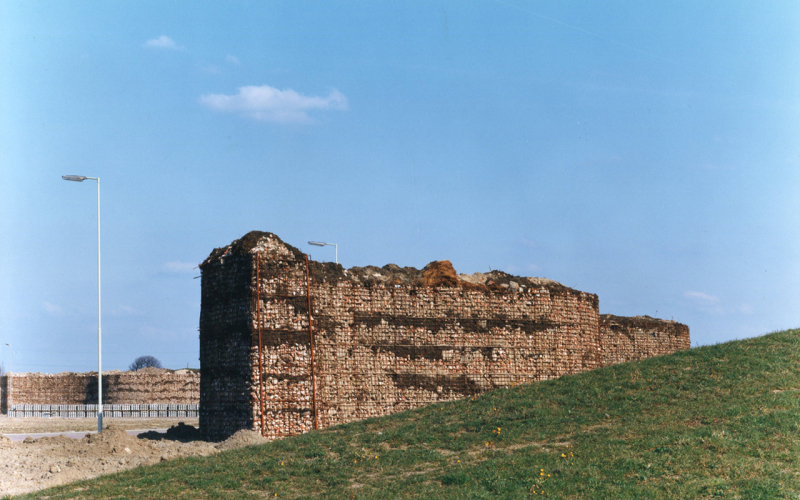 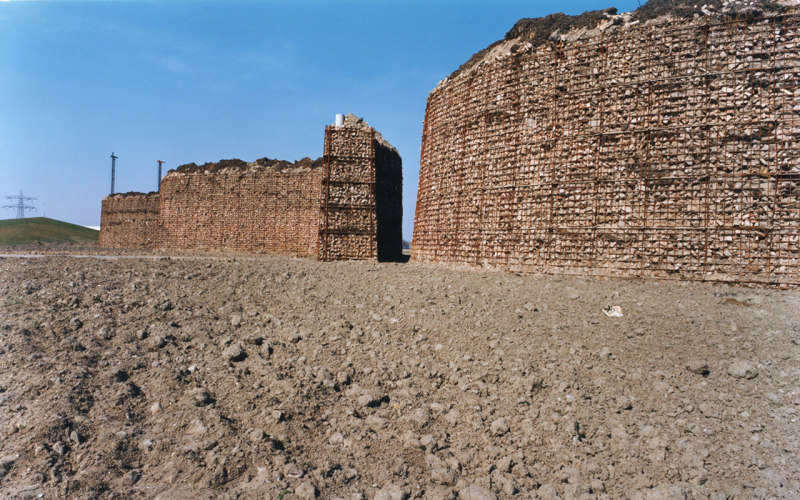 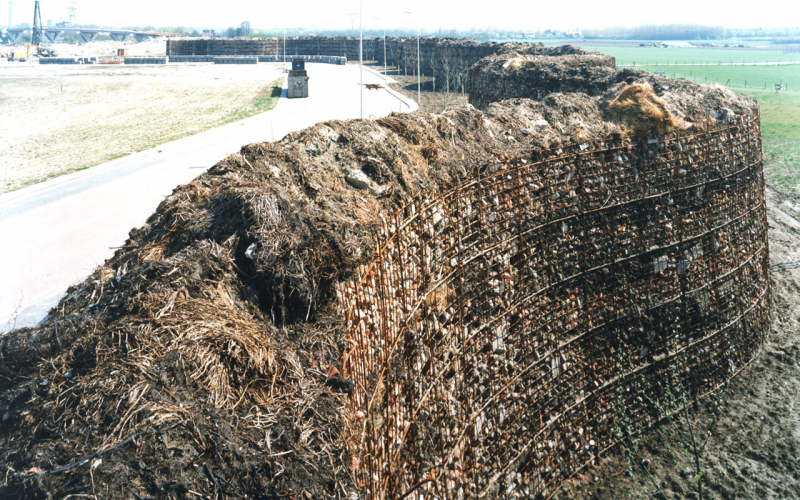 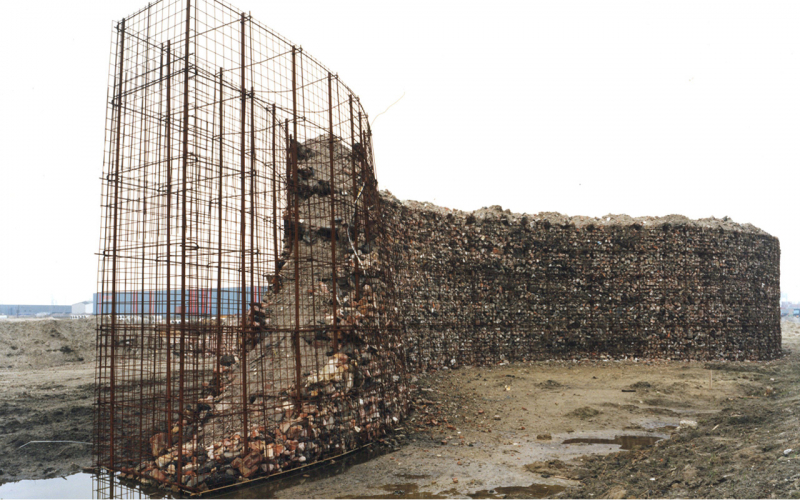 This work of art is located in the Albrandswaard, so actually not in the municipality of Rotterdam, but it is nevertheless worth mentioning on our website. Around 1990 a conflict raged in the beautiful parish of Rhoon, just under the smoke of Rotterdam. The well-known poet and cultural historian Jacobus 'JW' Oerlemans, also a professor at Erasmus University, lived in Rhoon and campaigned against the arrival of a distribution park of the Port of Rotterdam Authority, on the border with the village and the landscape of the Albrandswaard. The new 'Distripark' – a business site for logistics services and distribution activities for large container terminals – would cause tremendous noise nuisance and was also regarded by residents as an aesthetic damage to the landscape and townscape. After a period of civil disobedience and legal wrangling, a compromise was finally reached with the Port Authority in the form of a gigantic noise barrier. Then landscape designer Roel Bakker and Hans Abelman of CBK Rotterdam were called in. Krijn Giezen was selected as an artist. Influenced by the anarchism of Fluxus and fascinated by the tension between nature and man, Giezen was a pioneer of ecological art in the Netherlands. He lived and worked from a castle on the coast of Normandy. His Spartan attitude to life and withdrawn existence did not arise from defeatism, but offered him an opportunity to place 'the essentials of nature' and 'human action' in a new balance. Landscape designer Roel Bakker had designed a number of 'natural' boundaries in the landscape between the harbor and the village, but could not find a solution for the last 'gap'. He realized that a possible noise barrier at the end of the Molendijk in Rhoon would be so high that the village would be saddled with a 'visual disaster'. Was it also conceivable that an object would not only have sufficient 'acoustic properties', but could also add 'experience value' to the village and the landscape? Krijn Giezen responded with the design of a new 'landscape'. After drawing full sheets in his studio, he came up with the idea of ​​packing the landscape in a cage construction of reinforcing iron mats. In the entire piled pile construction, rubble was first poured, including from a demolished neighborhood in Hoogvliet. Then soil, plant remains and other organic waste were also added to the mass. The result was a 300 meters long, 6 meters high, winding and upright landscape, which seemed to have just come to life. "His creation is not finished, but lives, will change predictably and unpredictably, grow, overgrow, moss," wrote one reporter. 'The sunny side will develop and color differently than the shady side [and] in the spaces between the chunks of rubble the birds will nest. The packed landscape, as the wall was called, was as monumental as it was phenomenal – an 'autonomous' work of art as a biotope, a separation made into place and transition zone. (Source: Sculptures. Urban embellishment in Rotterdam since 1940, page 386-387).

Krijn Giezen (Noordwijk aan Zee, 1939 – Caen, France, 2011) started out as an assemblage artist and developed into an important land art, ecological and conceptual artist. He studied at the Royal Academy of Art in The Hague, where he later also taught. Important themes in his work are sustainability, the need for good food and the importance of recycling. He compiled many of his works in public space on site from found materials, functional so that they in turn could become part of the daily environment. Fluxus' anarchic humor underpinned much of his work and actions. In 1957 he received the Jacob Maris Prize and in 1968 the Prix de la Critique for his textile installations. In 1978, Giezen and three other artists represented the Netherlands at the Venice Biennale, where they offered the public fished and smoked herrings themselves. He has worked in Iceland, New York and China, among others. In 1990 Giezen moved to a castle on the Normandy coast. In 2005 he realized his last major work of art in the sculpture park of the Kröller-Müller Museum Watch out Attention: a huge staircase of 300 steps, which once climbed offers an unobstructed view of the Hoge Veluwe National Park. The work of Krijn Giezen is included in several museum collections.