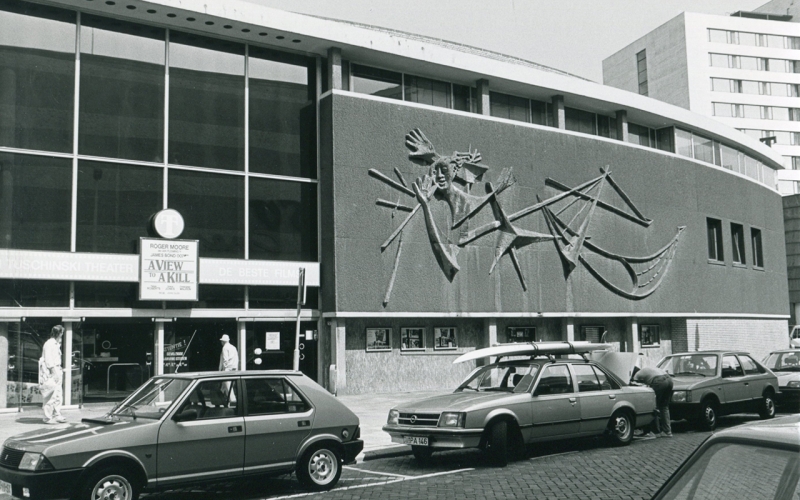 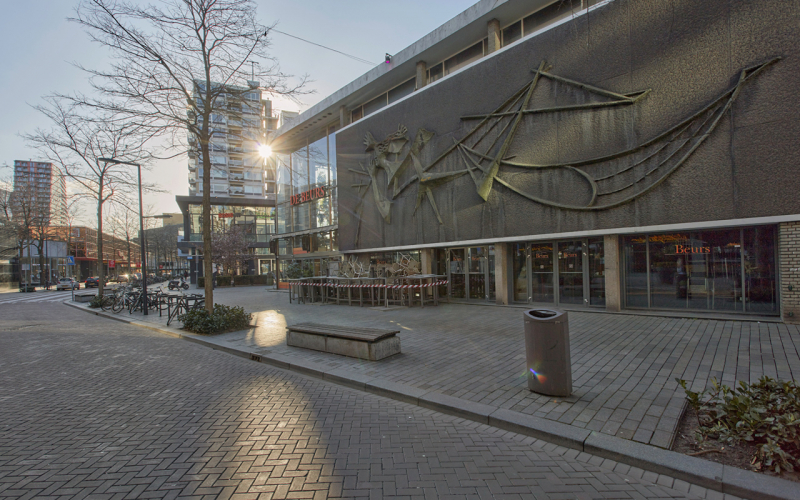 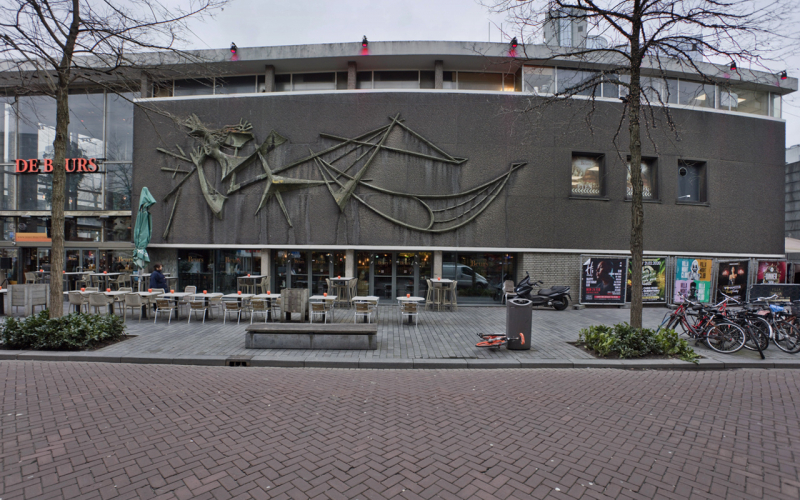 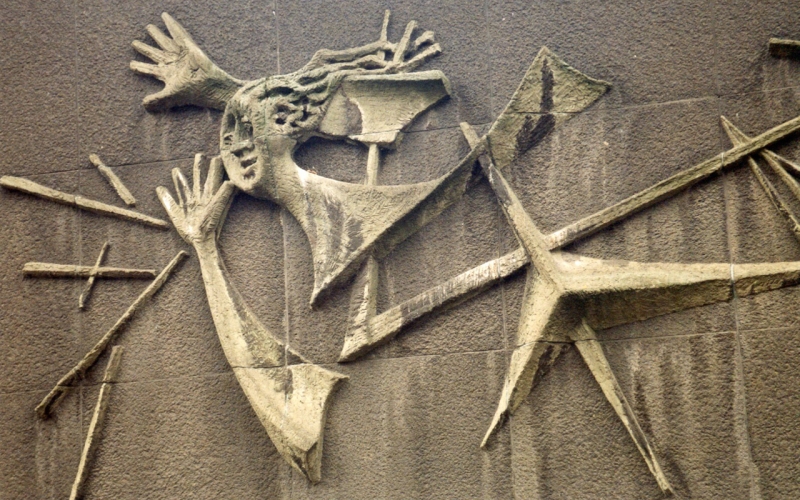 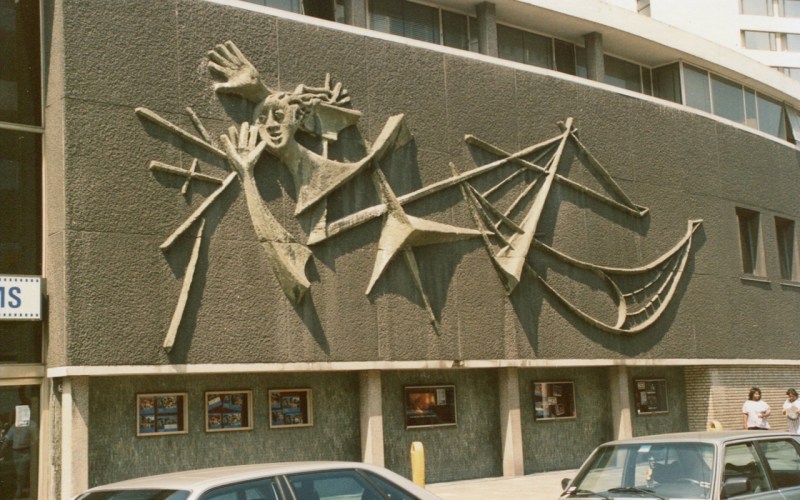 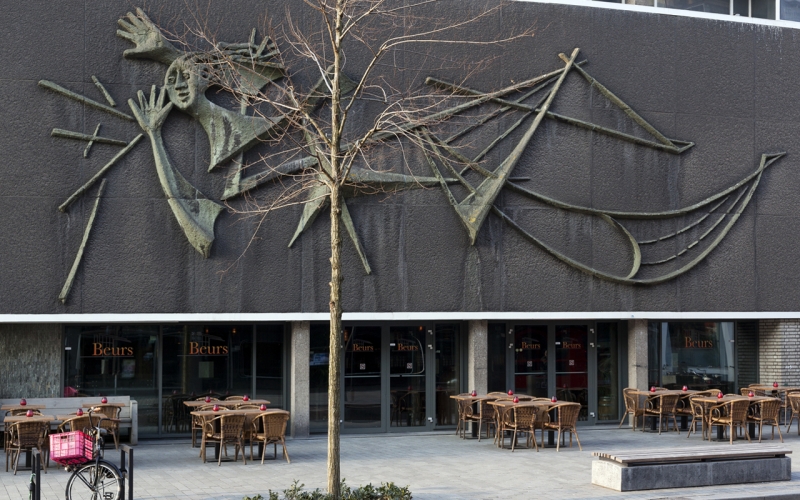 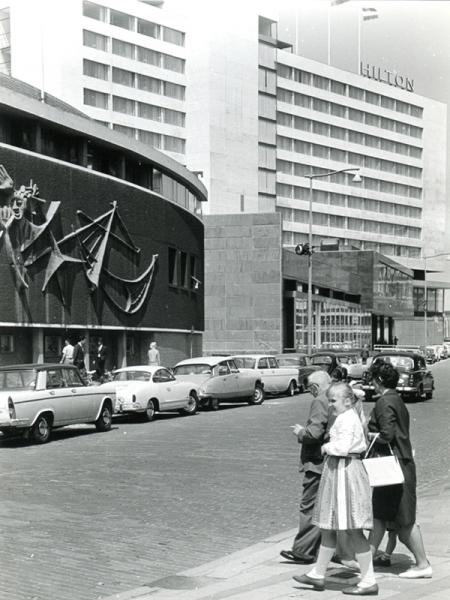 In 1955 Carel Kneulman made this beautiful facade sculpture at the Thalia Theater on the Kruiskade. He imagined here Thalia, the muse of comedy - in Greek mythology, Thalia stands for 'blooming revelry'. Kneulman is a talented sculptor whose expressive visual language is somewhat reminiscent of Wessel Couzijn, who lent himself to religious themes and monuments as expressions of freedom. You can still recognize his early fifties style of a minnie-like human figure, which transitions into abstractions. You can see a ship in it and a woman's head with an arm pointing towards the entrance. The plastic colored greener over the years due to oxidation. The facade relief was executed at a concrete factory in Arnhem and cast in 24 concrete slabs. Because a massive work of art against the façade was not possible, Kneulman designed it as a play of lines, in the muse of the film. The work emphasized the former Thalia cinema, as a witness to the great nightlife culture that has always been so defining in Rotterdam. The cinema has been a café for quite some time now.

Carel Kneulman (Amsterdam, 1915 - Darp, 2008) received his artistic training at the Rijksacademie voor Beeldende Kunsten Amsterdam and worked as a teacher of plastic design at the Gerrit Rietveld Academy. Besides being a visual artist, he was also a singer, poet and graphic artist. In his sculptures he sought a balance between figuration and abstraction. In 1955 he made the beautiful facade sculpture at the Thalia Theater on the Kruiskade in Rotterdam, which was considered a tribute to the reconstruction of the city. His best-known image is perhaps The sweetheart (1960) on the Spui in Amsterdam, which became a meeting point for Provo's.