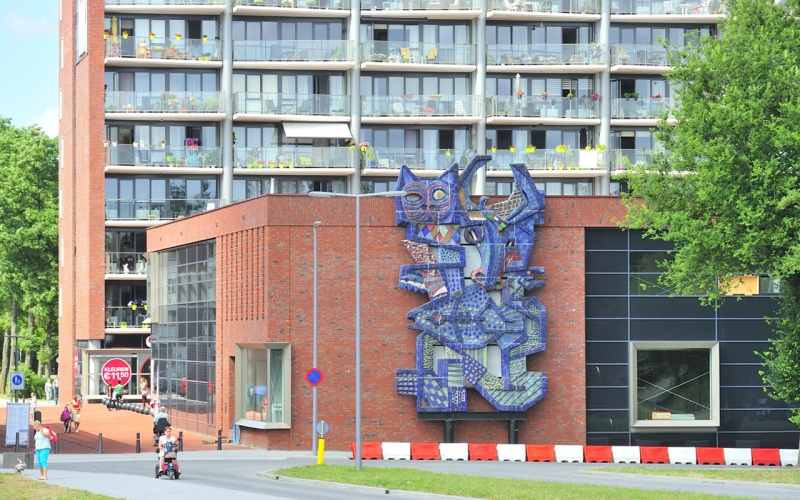 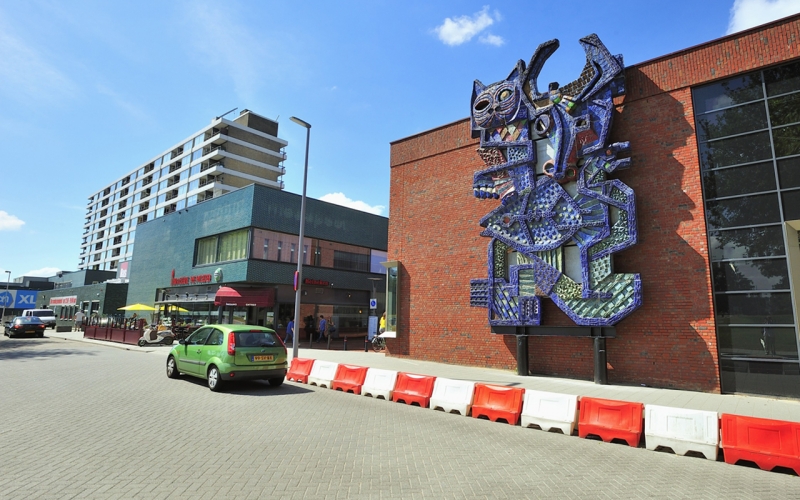 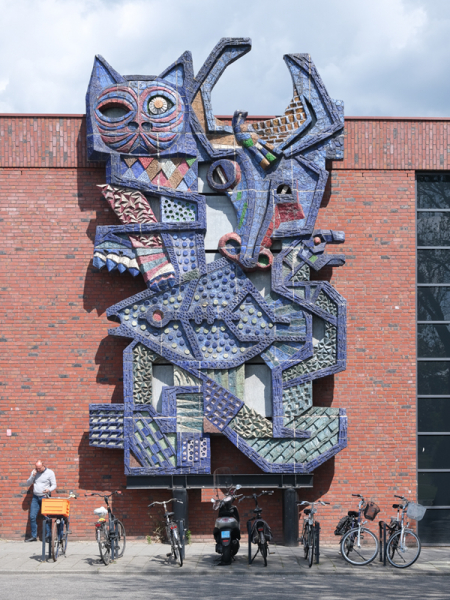 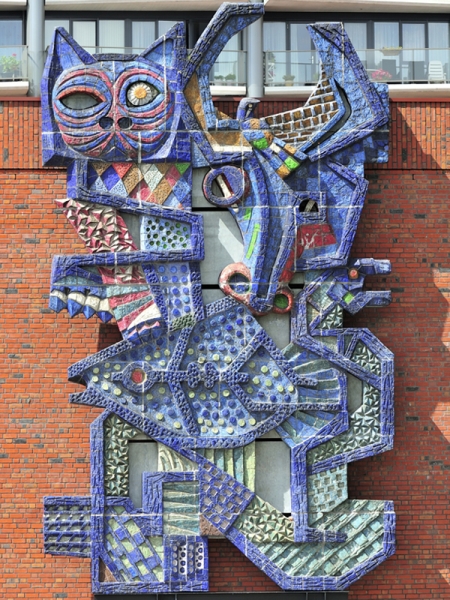 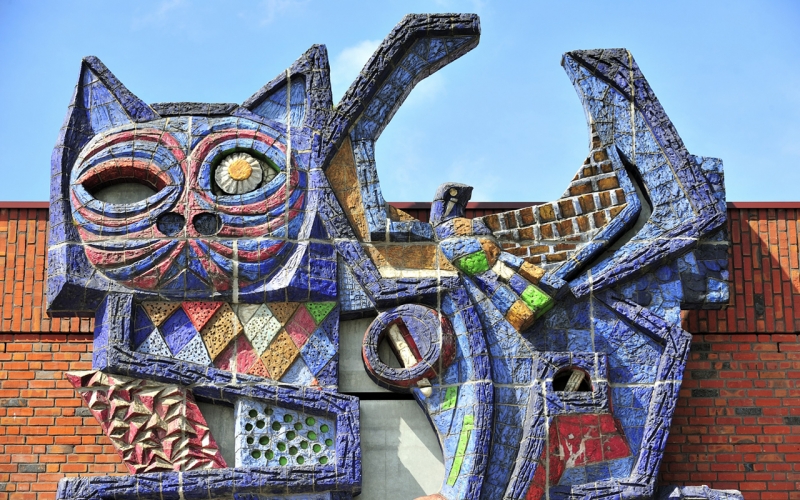 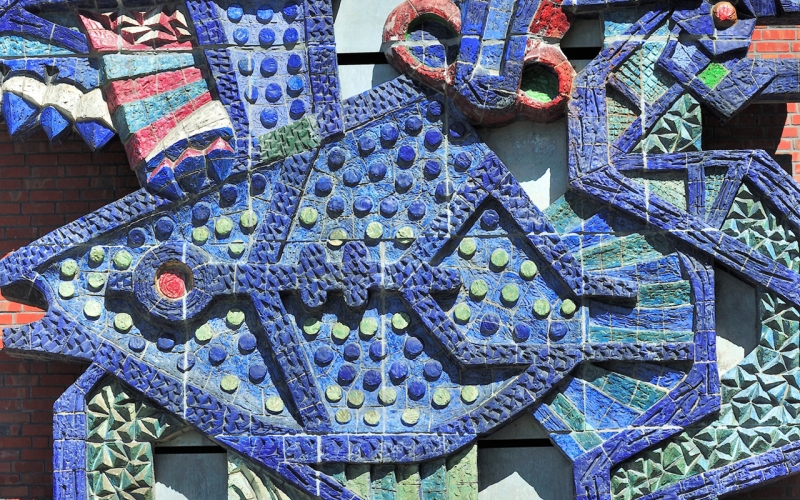 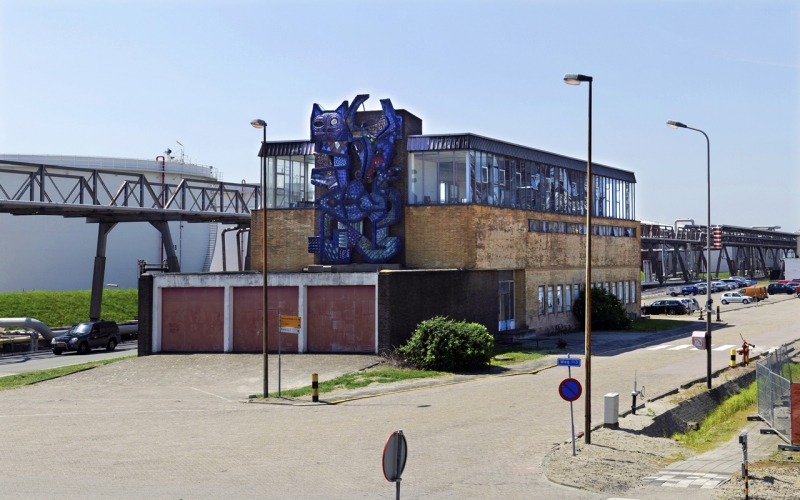 Dick Elffers, together with the Porceleyne Fles, made this ceramic relief of unprecedented dimensions: nine by five meters, built up of twelve hundred pieces and mounted on thirty slabs of reinforced concrete. The colossus towered in 1960 high above the rubber factory of Shell Pernis, for which Elffers had designed it. It was probably at that time the largest ceramic relief of the reconstruction. Elffers gave it the title The primordial world of the animal compared to the synthetic world and designed it as an amalgamation of animal forms: a cat, a fish, a serpent, and the head of an ox, whose horns merge into the wings of a bird. The relief was in keeping with the post-war preference for strong lines and optimistic colors - a visual language full of hope and enthusiasm for the new world. It is probably no coincidence that the abstracted bird is reminiscent of the peace doves on Elffers' posters of liberation events, such as his poster for the resistance exhibition. Resilient Democracy (1946). It was carried out in a high relief with a local 28 cm depth. Especially the bright colors stood out: a lot of purple blue with green, gold, white and a red that tends to a deep, deep seal red. Elffers consciously looked for colors that were absent on the industrial estate, because that emphasized the intended contrast between the animal world and the synthetic industry, but also the transformation to a new and prosperous world.
When the Shell Pernis rubber factory was preparing for demolition, this Elffers work of art was threatened. But the former borough of Hoogvliet, Shell and CBK Rotterdam decided in 2009 to join forces and started looking for an alternative to the wrecking ball. The size and weight of the statue, as well as the transport and restoration costs, made a rescue operation extremely difficult. Yet a new location was found near Pernis, in Hoogvliet: the new city office. After half a century, the enormous ceramic relief was removed from its place; sixteen parties cooperated. It took three years to organize this process. The artwork had suffered from the weather, so a specialized restorer was called in. Since October 2013, the work has graced the outer walls of the new municipal office and has been handed over to the new owner, Housing Corporation SOR.

Dick Elffers (Rotterdam, 1910 - Amsterdam, 1990) graduated from art academy in the late 1940s. Trained as a graphic designer, he will work as a teacher at the academy after his training. During and after his studies, he assists designers Paul Schuitema and for Piet Zwart, with whom he works for seven years and will be his main assistant. In May 1970, his studio in Rotterdam is bombed and he moves to Amsterdam. After the war he developed into a versatile artist and prominent designer, working for the Rijksmuseum and the Holland Festival, among others. He immerses himself in all kinds of disciplines, as a painter, draftsman, graphic artist, designer, sculptor, illustrator and realizes seventeen typographic book projects. He develops in all kinds of fields such as ceramic reliefs, tapestries and architectural designs. From 1976 to XNUMX he taught monumental art at the art academy in Den Bosch. For his work he receives the HN Werkman Prize and the State Prize for Typography and his work is included in the museum collections.