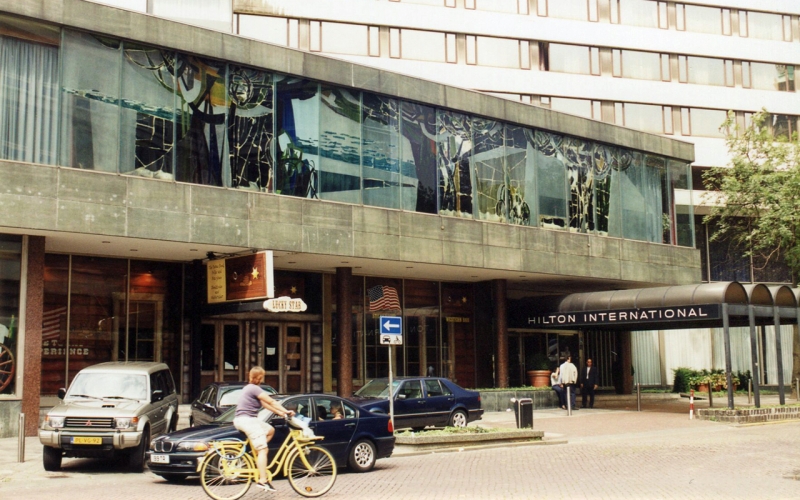 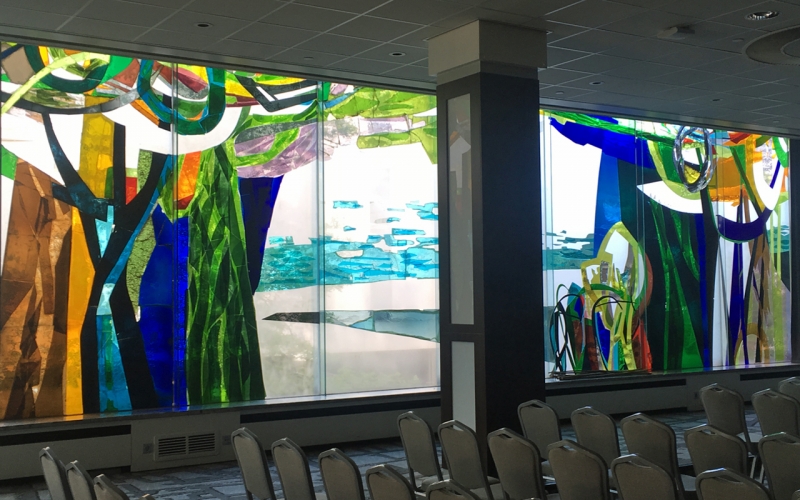 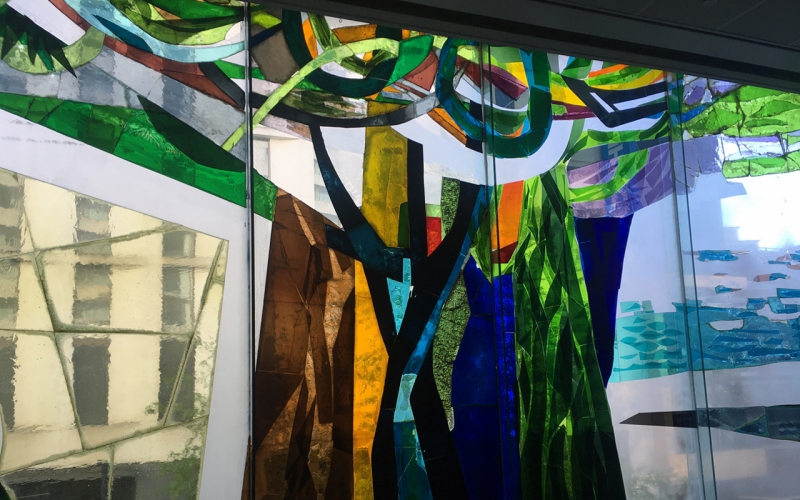 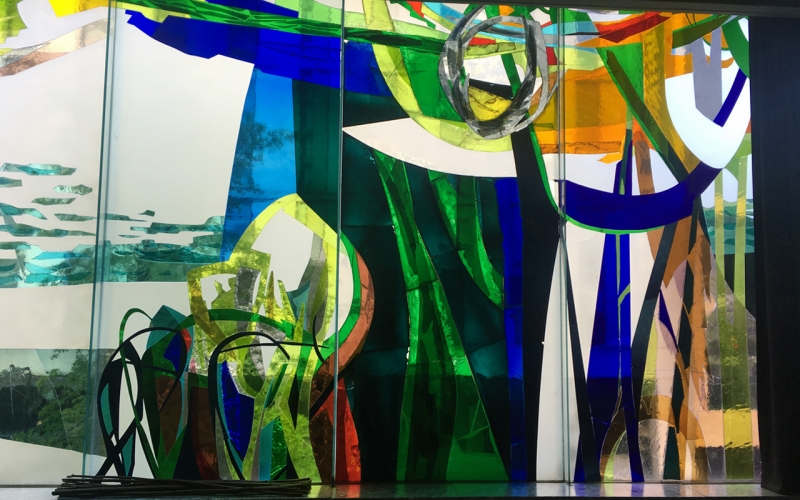 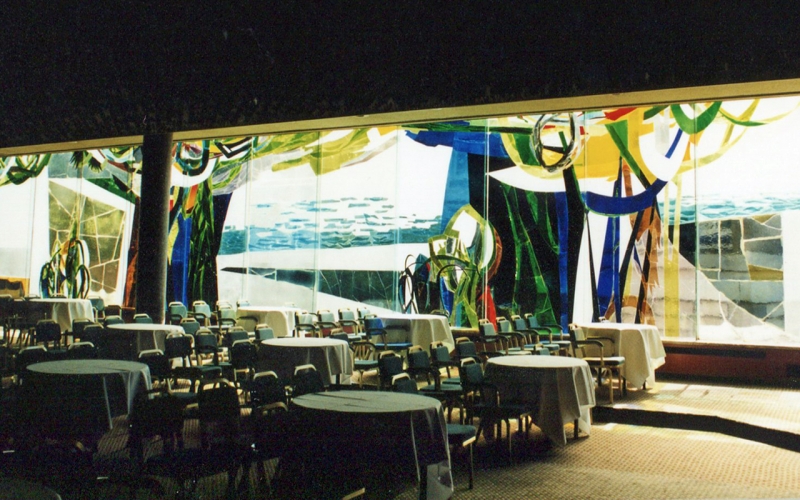 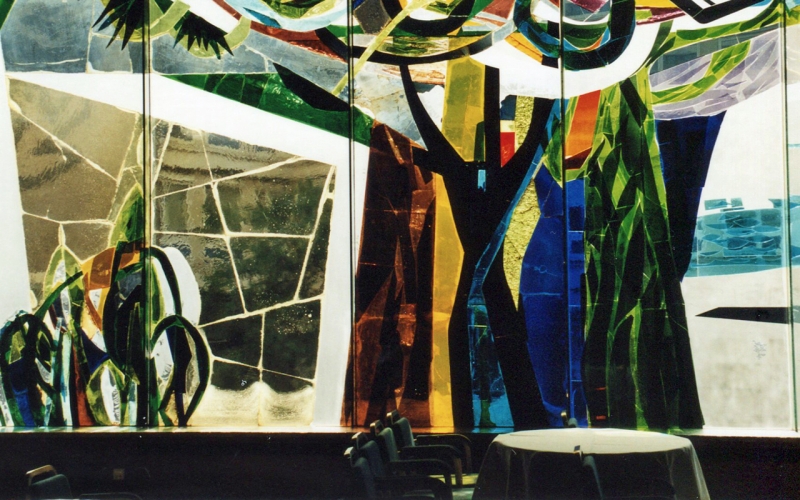 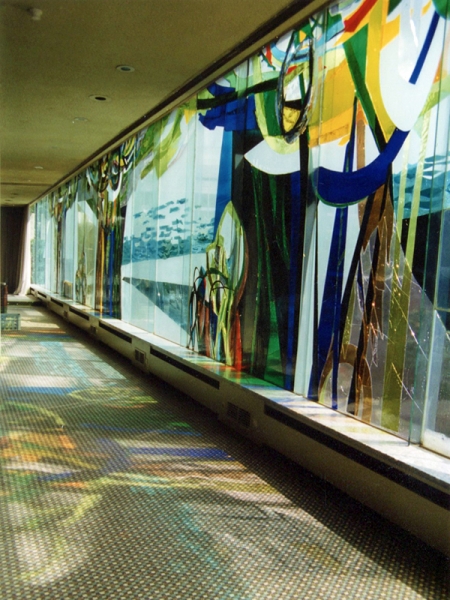 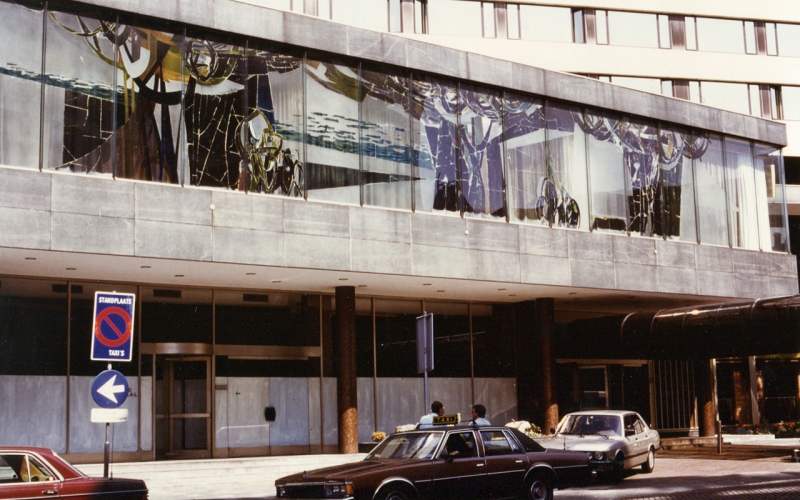 Above the entrance of the Hilton Hotel on the Kruiskade is a large glass wall made by Joop van den Broek. The wall has a length of 32 meters and consists of 19 glass panels of colored glass, on which plant motifs and garlands are depicted. The Jardin room of the same name is located on the inside of the hotel, hence the title of the work The Garden is. As a glass artist, Van den Broek developed a new process by using rough pieces of glass (waste) for an expressive effect. He worked the pieces with the sandblast for whimsical effects. On the outside it gives the bulging first floor an extra layer and it is a colorful eye-catcher. From the inside it works even better, because then you also see the seams and structures and the way in which the material is part of the work. The building was designed by Maaskant and the glass appliqué fits well with the architecture, which incorporates various decorative details by the architect. Such as a glass block wall with mirrors at the stairwell, possibly also designed by Joop van den Broek. The Garden is part of a very striking building that used to be an eye-catcher for this area.

Joop van den Broek (Amsterdam, 1928 - 1979) came from Amsterdam where he was allowed to go to the Rijksacademie on his 16e. He had a part-time job in the glass industry and later became a glass artist. He has worked for Hilton hotels in Amsterdam, Rotterdam, Berlin, London and Tehran. His papers at the Tomado house in Dordrecht have been demolished. In 1964 he was the first monumental artist to win the Prix de la Critique. He never became widely known, but was regarded as a glass specialist among colleagues and became head of the design studio of the glass industry Tetterode in Amsterdam. In his work you see Cobra-like influences, but also his very own style, with which he developed almost free-standing images of glass. He also made a glass wall in the Adriaan Volker House on the Oostmaaslaan in Kralingen.