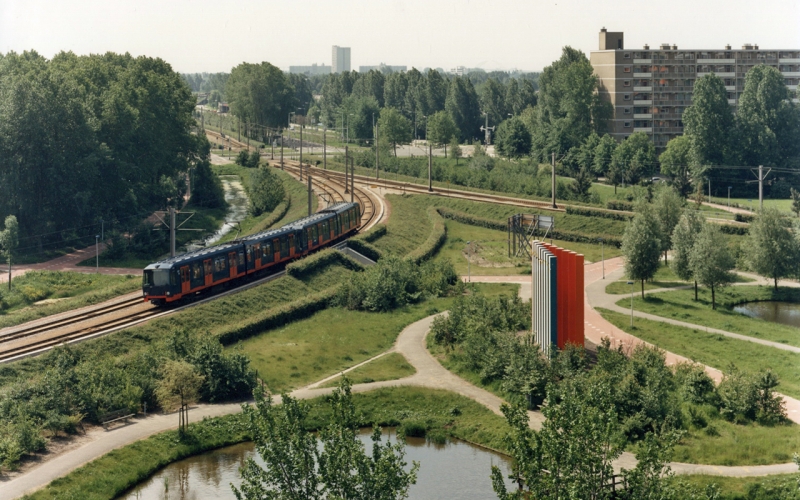 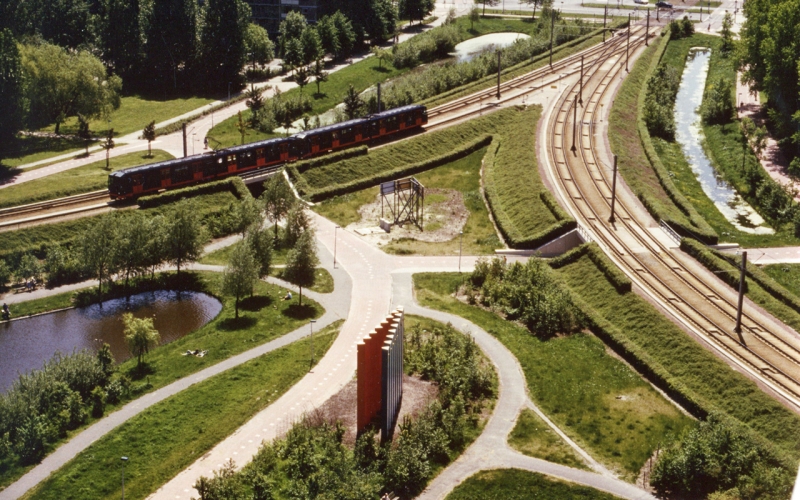 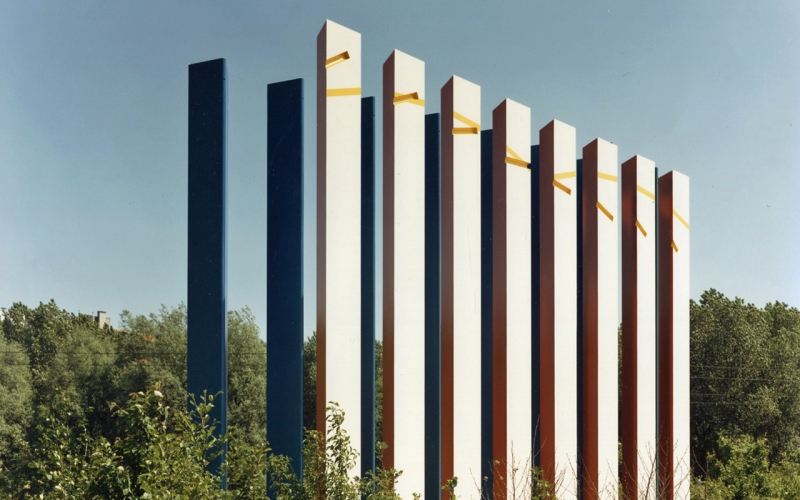 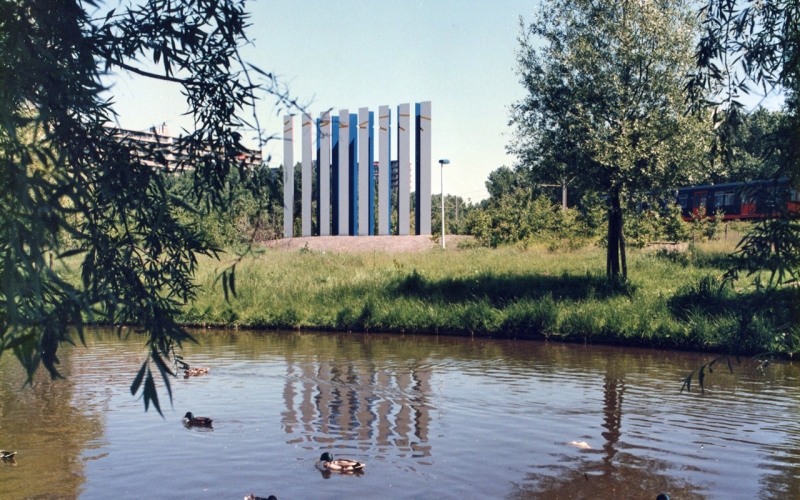 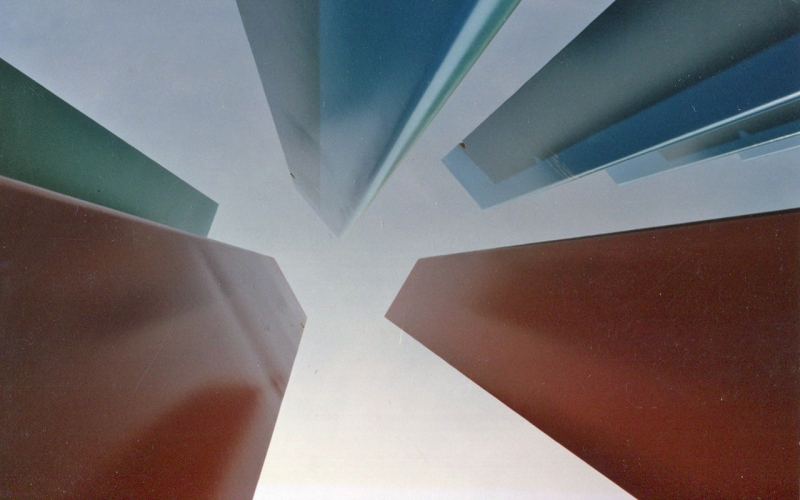 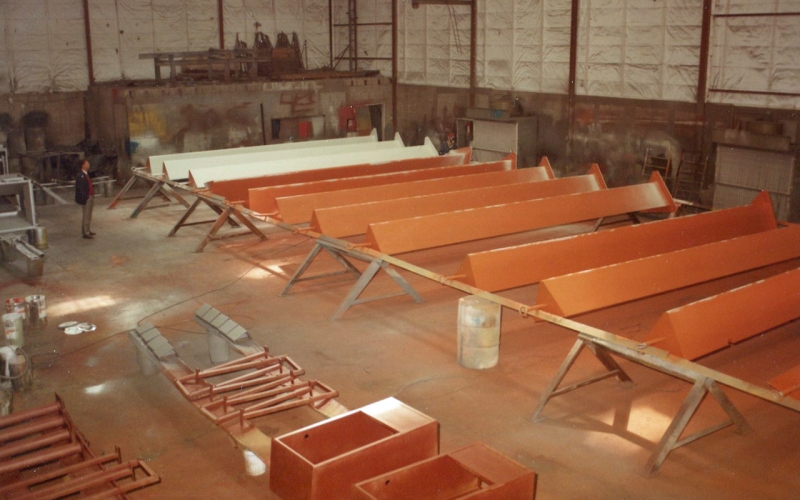 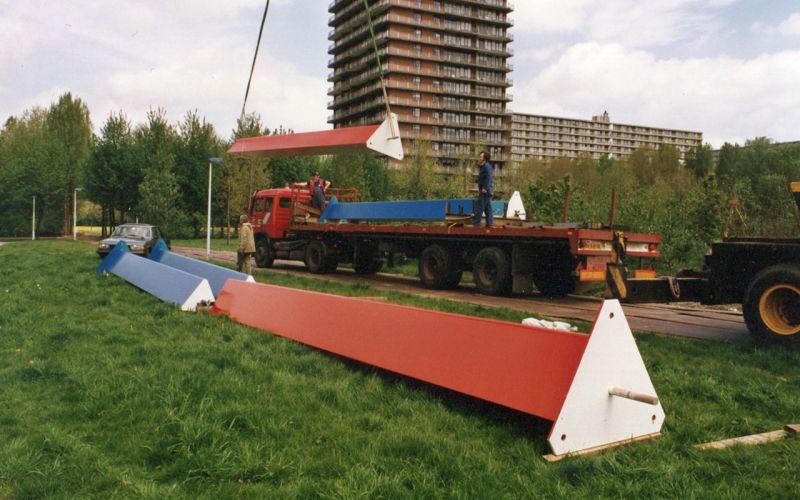 Beyond Graskruid metro station in Prins Alexander, the metro line splits into Line A, direction Ommoord-Binnenhof, and Line B, direction Nesselande. These lines split in the middle of the green Albert Schweitzerplantsoen. Because the metros have to make a turn, they keep to a certain speed. Artist duo Peter Jansen and Matthijs van Dam have based on that speed gradient determined the colors of a V-shaped metal plastic, which is placed near the junction. In the park, sixteen three-sided metal tubes, each 7 meters high, have been placed in two converging lines. The outwardly facing sides of the tubes are light gray with a signal yellow cut at the top. The other sides are orange-red and blue, colors that refer to the former color scheme of the RET and its metro trains. When the metro goes through the bend, this creates a plane with white, blue or red lines. Jansen also called these colored transitions a kinetic effect.

Peter Jansen (Amsterdam, 1938) is an environmental artist, painter, sculptor, graphic artist and photographer. He was trained as a painter at the Royal Academy in The Hague. In 1961 he won the Royal Subsidy for free painting, in 1962 the Godon Prize and in 1963 he had an exhibition at the Gemeentemuseum in The Hague. From 1969 to 1985 Jansen was a teacher at the Academy of Visual Arts in Rotterdam. He was a pioneer in the use of computers in art education in the Netherlands and in 1988 he became managing director of the Utrecht School of the Arts at the faculty of art, media & technology. Until 1998 he formed a duo with Matthijs van Dam in the field of environmental art and they fulfilled many art commissions.

Matthijs van Dam (Heemstede, 1943 - Amsterdam, 1998) was a sculptor, wall painter and environmental artist. Until 1998, Van Dam formed a duo with Peter Jansen in the field of environmental art and together they fulfilled many art commissions. They often made large steel abstractions with pastel or rainbow colors, twisted or tilted. Such as in The Hague near Holland Spoor and near the conference building on Scheveningseweg, as well as a color scheme for homes in Amsterdam.