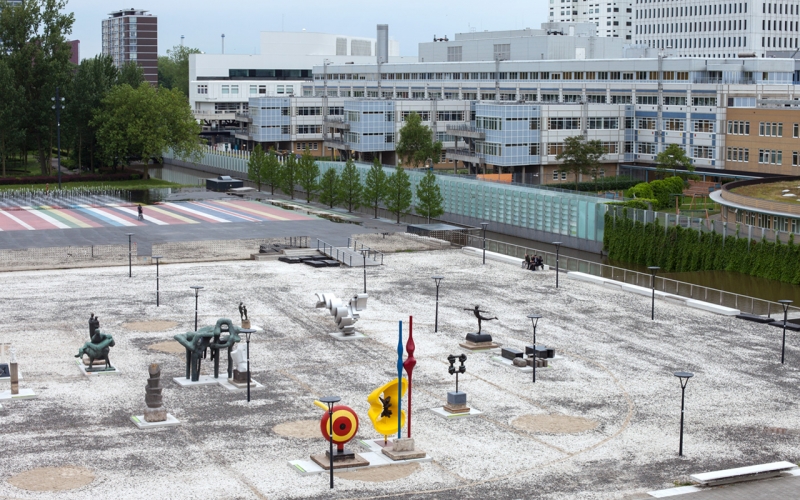 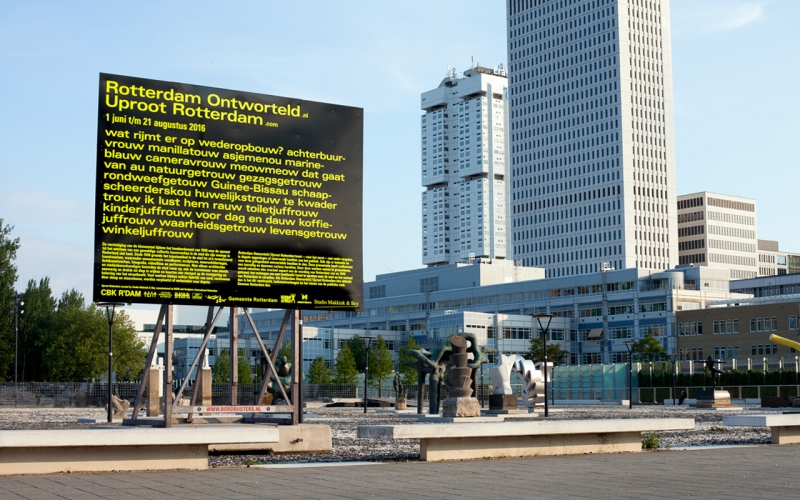 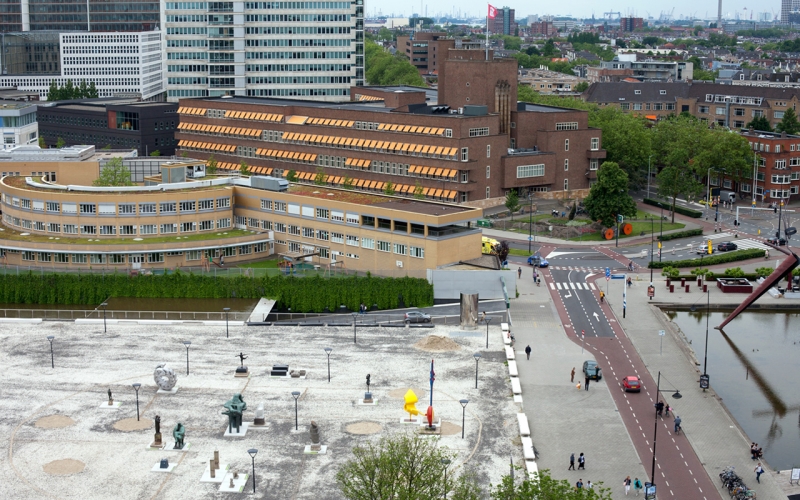 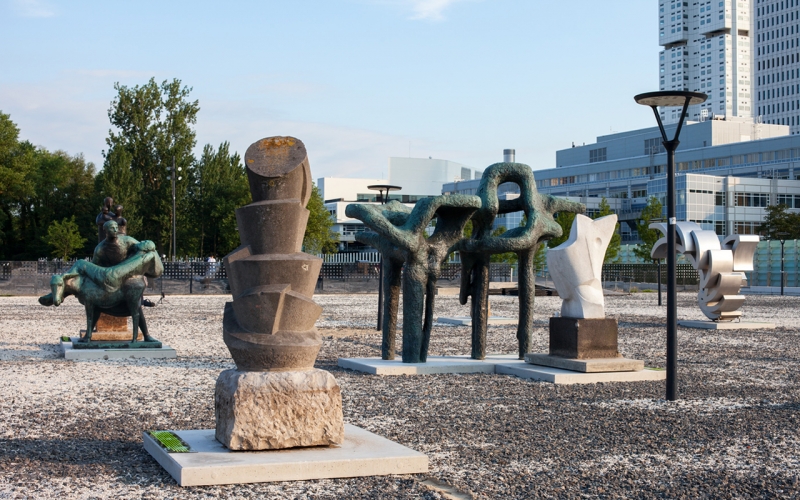 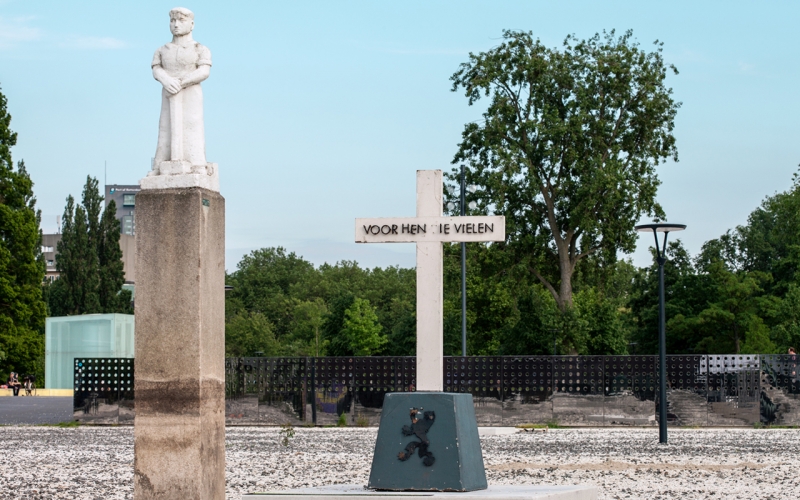 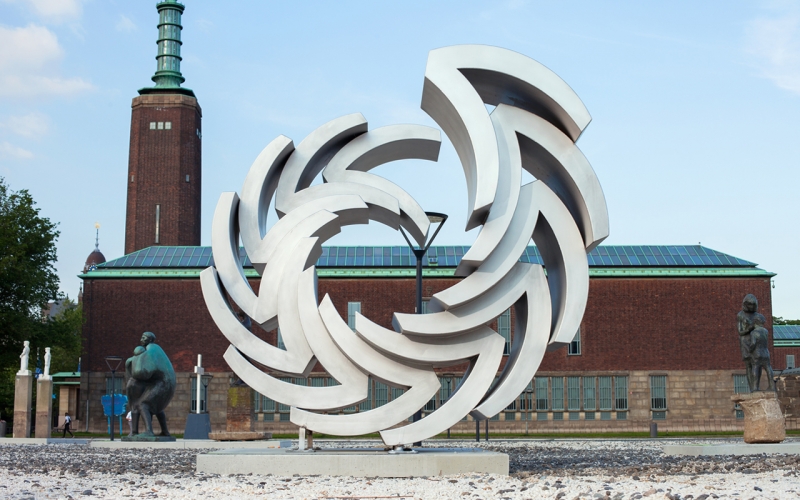 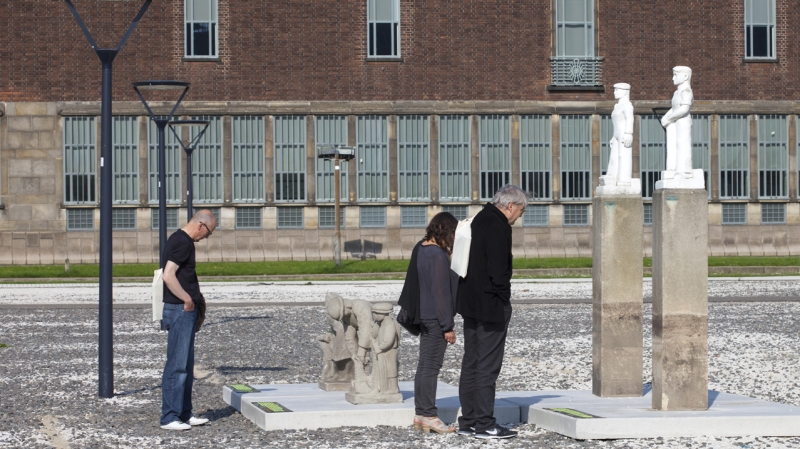 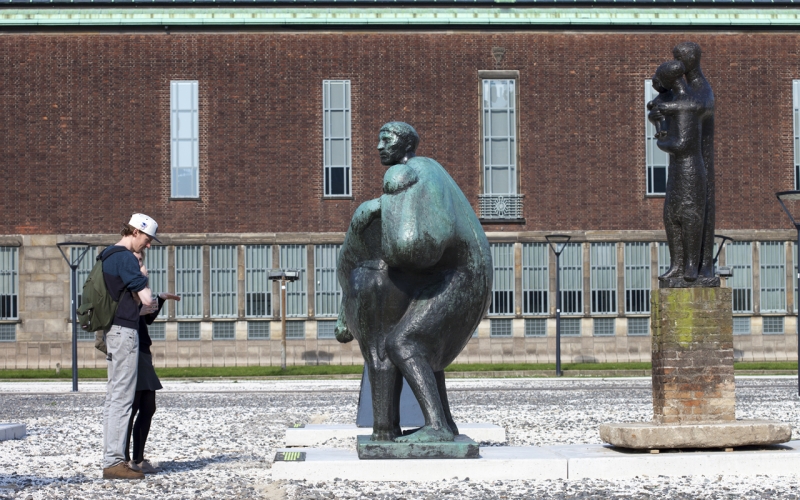 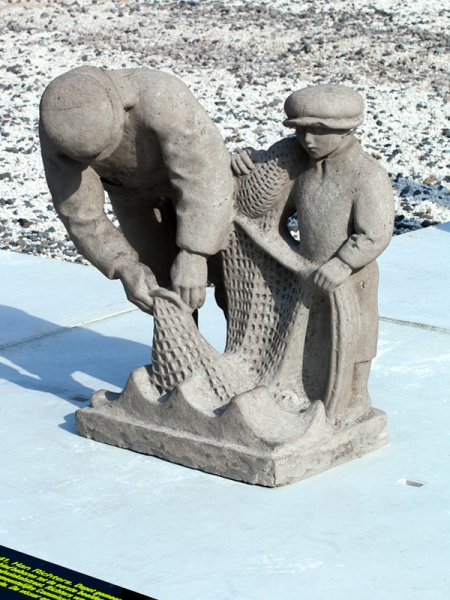 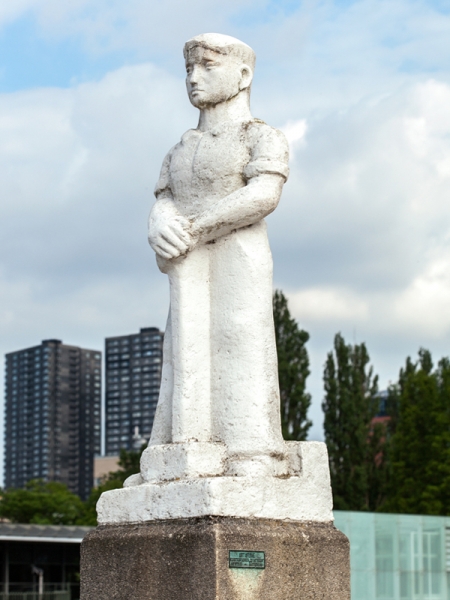 Preface
The destruction of the city center during the bombing of 1940 was the prelude to the creation of a fantastic collection of works of art in the city that are unparalleled in the Netherlands. Since 1940, the supply of art in the city has grown to around two thousand works of art, including monumental wall art, sculptures, murals, light artworks, photography, video films and performances. Not only architects and urban planners rebuilt the city, the artist was also always present and left his mark on the design and perception of the street scene deep into neighborhoods and neighborhoods. However, many works were temporary in nature, disappeared due to demolition and new construction, moved or moved to depots. Uproot Rotterdam shows - for the first time - a series of forgotten, stored or roaming images to the public. There are also well-known and uprooted statues on display. This presentation has a deliberately coincidental and therefore curious character. By presenting these works together, at least one crucial aspect of the creation of Rotterdam after 1940 is shown: the desire to speak about the city with visual art and to tell the story of Rotterdam. If Uproot Rotterdam anything expresses then it is this: resilience, longing for the future and celebrating public affairs. So just Rotterdam.

* Han Richters, The fisherman and his son en Fleeing woman and child (1940-1941)
Both images belong to the first group of sculptures that were placed in the winter of 1940-1941 on the battered Coolsingel, on either side of the emergency shopping street. Richters was a Rotterdam artist, whose studio was hit by the bombing. He was commissioned by the Municipal Commission for the Visual Arts, a committee that was formed in a hurry and aimed at providing work for Rotterdam artists. The fisherman and his son depicts the origins of Rotterdam as a fishing town and the Fleeing woman and child commemorates the flight of homeless people from Rotterdam during the bombing. Both images disappeared over time to the depot.

* Koos van Vlijmen, The community workers (1941)
Koos van Vlijmen was a talented Rotterdam sculptor. Together with Han Richters, he was one of the pioneers of the Rotterdam sculpture collection. In 1940 he too was commissioned by the Municipal Commission for the Visual Arts and he also made four images for the Coolsingel. Two works have disappeared without a trace, but The community workers are still there and are on the Zijpe in Pendrecht today. His images represent the resilience and courage with which Rotterdammers rebuilt their city after the bombing. The artworks are temporary Uproot Rotterdam uprooted.

* Wooden memorial cross (1945)
The Dutch war memorial policy was prompted by the post-war proliferation of mostly spontaneously placed memorial crosses in the cities. In this sense, the 'cross' is the start of a long series of war memorials. This cross disappeared over time to the depot.

* Piet van Stuivenberg, no title (1950)
This sculptor from Schiedam is responsible for the first abstract work in the public space of Rotterdam. In his design, he was inspired by the beautiful stair gallery of the Bouwcentrum on the Weena. The work was unveiled in 1950 by Mayor Pieter Oud and initially adorned the lawn in front of the Bouwcentrumcafé on the Westersingel. Due to work in the city center, the image was doomed to roam. Today the statue is located at the Gedempte Zalmhaven. The artwork was funded thanks to money from the occupier. Before 1960, Rotterdam did not yet have a budget for works of art in public space. There was, however, a 'potty' for public works of art, left over from the years 1940-1945. Other works, including Monsieur Jacques (1959) on the Coolsingel. The image is temporary for Uproot Rotterdam uprooted.

* Huib Noorlander, The family (1963)
The Rotterdam artist Huib Noorlander (married to artist Joeki Simak) made a large number of figurative images for Rotterdam, including the well-known image Reading girl (1960) on the Lijnbaan. Noorlander was very active during the reconstruction of Rotterdam. The family marked the completion of Zuidwijk on the left bank of the Maas and expressed a typical reconstruction scene: harmony, unity and belief in the future. The artwork is temporary for Uproot Rotterdam uprooted.

* Han Wezelaar, The Good Samaritan (1964)
Han Wezelaar was the first Dutch student of Ossip Zadkine in Paris and organized the first Rodin exhibition in the Netherlands. On 16 in March 1961, the city council agreed to the purchase of The Good Samaritan. There were endless meetings about the height of the base, which at five meters would be much too high. Council members felt that the image was "so exalted" that the Biblical ideal would become "unreachable for the ordinary man." The sculpture marked the final phase of the construction of the Dijkzigt hospital. The statue is in a depot at the Erasmus Medical Center.

* Gust Romijn, Clouds (1965)
Gust Romijn was one of the best known, also internationally renowned artists of post-war Rotterdam. Since the 1950 years, he has made an impressive series of free-standing images for the city. His images were a criticism of the geometric dullness and predictability of the business architecture of Rotterdam. Clouds van Romijn was a gift from the Meneba flour factory at the Daniël den Hoed clinic. For the time being this image is temporarily uprooted before Uproot Rotterdam.

* Piet van Stuivenberg, no title (1965)
Van Stuivenberg was one of the most striking sculptors from the post-war period. In 1950 he made the first abstract image in the public space of Rotterdam. Fifteen years later he made this sculpture for the Lengweg in Hoogvliet. This assignment came from a grant from the city council (1963) for the Hoogvliet neighborhood beautification. The committee chose leading artists, including Alexander Calder and Gust Romijn, but also Piet van Stuivenberg. The image has been temporarily uprooted before Uproot Rotterdam.

* Marian Gobius, Children with bird (1967)
This typical reconstruction artwork, children playing with a bird, was made for the De Karekiet public primary school in Rozenburg. It is a bronze, figurative sculpture that fits well in the schoolyard. Rozenburg incidentally paid a lot of attention to public works of art and placed almost forty works in public space. Due to the demolition of the school building Children with bird saved. Marian Gobius worked as a sculptor in France, England, Indonesia and the United States. She made many resistance monuments and monuments for women's emancipation. Part of her work is included in the collections of the Jewish Historical Museum in Amsterdam.

* Gust Romijn, The target (1967)
Gust Romijn was inspired by pop art and based on that inspiration made two characteristic, particularly colorful works for Rotterdam, including The target. Around the middle of the 1960 years pop art flourished in Rotterdam (think of Daan van Golden and Woody van Amen). The statue was placed in the Buizenpark on Katendrecht, where there are more sculptures. On '21 March 2016' the 'Gust Romijnbrug' was opened, a bicycle and pedestrian bridge that connects Charlois with the Waalhaven. Near the bridge there is an old farmhouse where Romijn lived and worked. The image has been temporarily uprooted before Uproot Rotterdam.

* Chris Elffers, Fruit principle (1970)
The Rotterdam artist Chris Elffers made many monumental works in the Netherlands. His work is known in the courtyard of the Hoogvliet shopping center: Growth community (1970). He made the dynamic sculpture for the new Ommoord neighborhood on Hammarskjoldplaats Fruit principle. The titles of both works express the optimism and longing for the future that the artist gave to new neighborhoods in Rotterdam. The image has been temporarily uprooted before Uproot Rotterdam.

* Leen Droppert, Growth elements (1972)
Leen Droppert, an artist from Vlaardingen, created a large number of works of art and monuments along the entire Waterweg. Many of his works were created thanks to the so-called percentage scheme. The best known is Geuzen monument (1983) on the Market of Vlaardingen - the statue commemorates the victims of 'de Geuzen', the first large Dutch war resistance group. Droppert also made a series of strikingly colorful sculptures, including for the Zalmplaat metro station and for the GGD building on Schiedamsedijk. To be Growth elements were made for Rozenburg and temporarily stored in the depot due to construction work. The title refers to the optimism of reconstruction: growth, maturing, insight.

* Shinkichi Tajiri, The knot (1976)
Tajiri is a Dutch-American artist of Japanese origin who claimed that art should be enjoyed and not understood. With this image and the series of nodes it belongs to, he wanted to express it. Tajiri collaborated with members of the Cobra group and with sculptors such as Wessel Couzijn, Carel Kneulman and Carel Visser. He studied with Ossip Zadkine, among others. The knot is part of the collection of Sculpture International Rotterdam and is originally on the Coolsingel, just in front of the building of the former ABN-AMRO bank. The artwork is temporarily uprooted for Uproot Rotterdam.

* Piet Killaars, Spiral II (1982)
The Limburg sculptor Piet Killaars made this special monumental work of art for the Groene Hilledijk in Zuid. The sculpture was realized in collaboration with the retailers association Boulevard Zuid. Retailers' associations were remarkably often involved in the arrival of new works of art in the city. That already started around 1950, when shopkeepers understood that they had to show their solidarity with the shopping public in a re-emerging city. The artwork is temporary for Uproot Rotterdam uprooted.

* Thom Puckey, The Husband Of The Doll (1992)
This sculptor from England lives in the Netherlands and taught sculpture and monumental art in Groningen and Amsterdam. Puckey makes many works for public spaces, including the bronze sculpture for Rotterdam The Husband Of The Doll. The body of the male figure is depicted in a very lifelike way. His elegant pose, however, contrasts with the twisted mask that forms his face. The work was purchased by Sculpture International Rotterdam and placed on the Coolsingel, near the building of the former ABN-AMRO bank. The artwork is temporary for Uproot Rotterdam uprooted.

* Jeff Wall, Lost Luggage (2001)
These cases are spare parts of the artwork Lost Luggage (2001) that the Canadian artist Jeff Wall made for the head of the Wilhelminapier at Hotel New York. From the pier, the Holland America Line shipped many thousands of European migrants to the New World. With his depiction of a depot for found objects, Wall made no less than a monument for one of the most important European migration centers and thus a monument for migration. The work was a government gift and was unveiled by the then Prime Minister Wim Kok. It belongs to the collection of Sculpture International Rotterdam.

* Jan van Munster, IK (2001)
Jan van Munster belongs to an important Dutch generation of monumental artists. He made a number of works for Rotterdam, including IK, two horizontal letters, designed in polished black granite. The letters express the maker's philosophy ("Everyone is Me, but who is I?") And functioned as high-quality street furniture alongside Blaak Station. Due to the revitalization of the area around the station, the work was temporarily stored. The artwork is part of the collection of Sculpture International Rotterdam.

Studio Makkink & Bey is a Rotterdam architecture and design office and was founded in 2002. The studio is led by architect Rianne Makkink and designer Jurgen Bey. The studio works in different fields of applied arts and includes public space projects, product design, architecture, exhibition design and applied arts. Jurgen Bey teaches at the Royal College of Art in London and has been director of the Sandberg Institute in Amsterdam since 2010. Makkink teaches at various academies, was a lecturer in architecture at the University of Ghent and teaches at the Design Academy in Eindhoven.